Will rising yields spook stocks? – Humble Student of the Markets

Mid-week market update: Last week, the market was rattled by the prospect of an Evergrande default. This week, it’s rising yields. Both the 5 and 10 year Treasury yields surged decisively this week and the 2s10s yield curve has steepened. 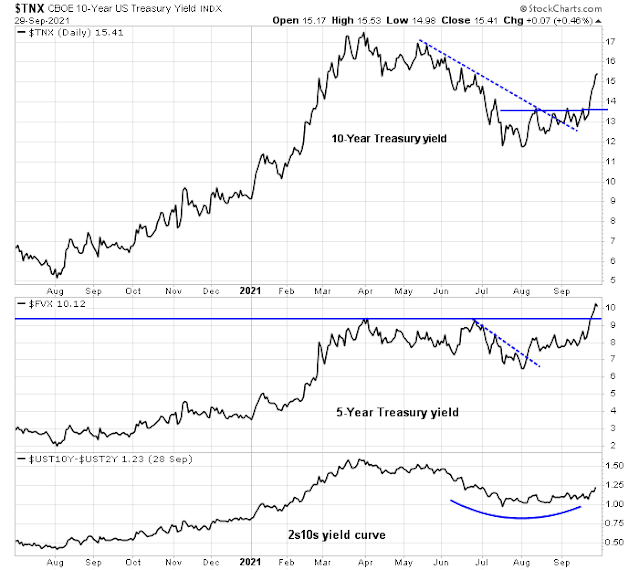 The answer to that question is a “good news, bad news” story. Let’s start with the bad news. A Goldman Sachs study reveals that stocks struggle when rates rise too rapidly. 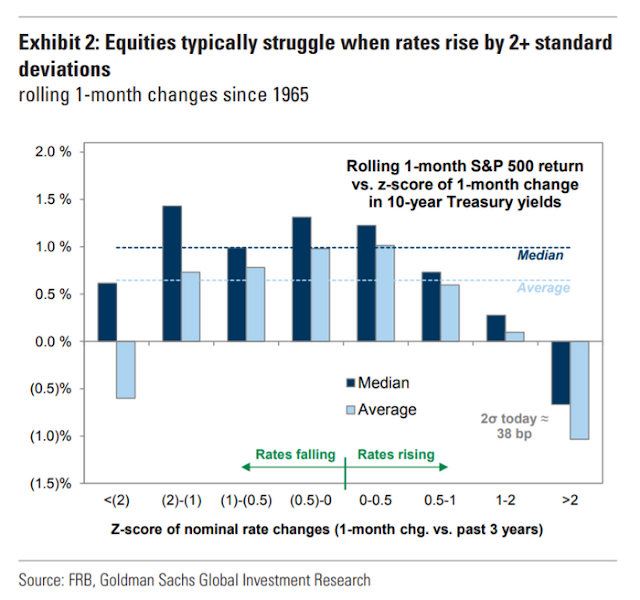 Equities, as an asset class, compete with fixed income instruments for funds. A simple way of rating the relative attractiveness of stocks and bonds is the Fed model, which compares the E/P ratio with the yield on a default-free Treasury. If bond yields rise. Equity prices can maintain their level or rise even further as long as the E in the E/P is rising faster than the increase in Treasury yields.

The latest update shows S&P 500 forward 12-month EPS fell last week. That’s the bad news. The good news is the earnings decline was not confirmed by the midcap S&P 400 or smallcap S&P 600. 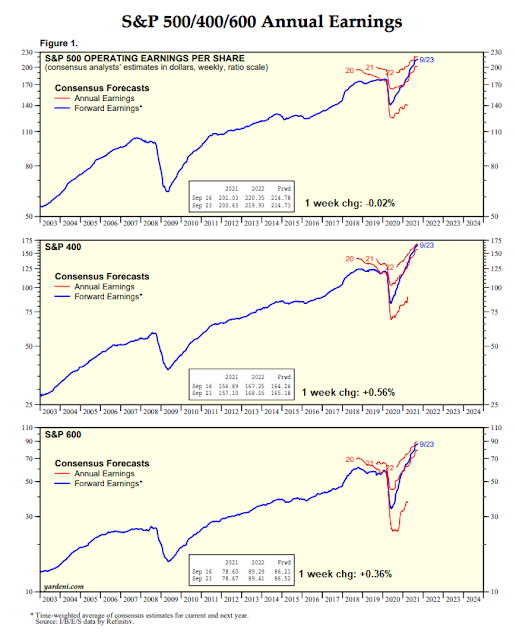 The bulls can find other constructive signs. The rise in yields looks overdone. The price action of XLU, the utilities ETF which I use as a yield proxy, is testing its 200 dma and wildly oversold on the 5-day RSI. RSI readings are sufficiently stretched and comparable to the initial stages of the COVID Crash to warrant at least a short-term relief rally. In addition, XLU is also testing a key relative support zone (bottom panel) which should hold in light of the oversold condition of the sector. 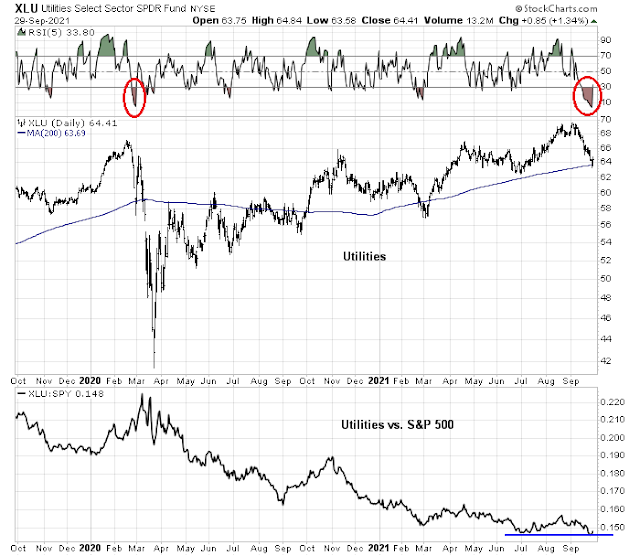 Credit market risk appetite, as measured by the relative price performance of junk bonds and investment-grade bonds to their duration-equivalent Treasuries, made fresh all-time highs before retreating.

In addition, the relative performance of defensive sectors and industries to the S&P 500 are weak. The bears haven’t taken control of the tape. Major corrections and bear phases simply don’t look like this. 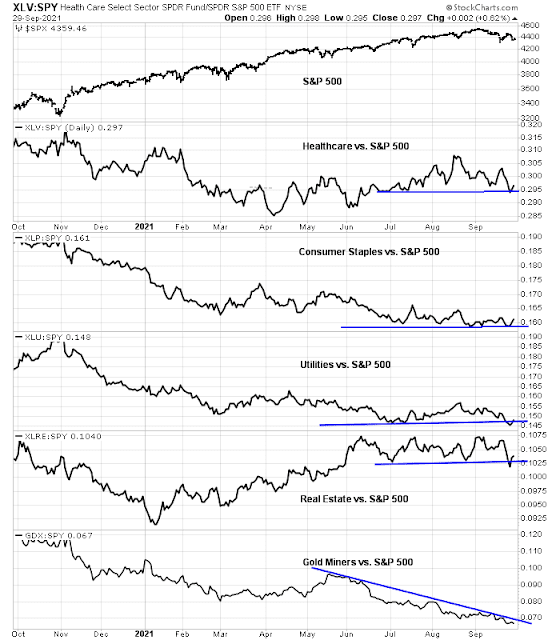 Here is some good news from Hong Kong. The shares of China Evergrande is trying to make a bottom.

Don’t panic about a major correction. Barring some catastrophe such as a default by the US Treasury, the market is unlikely to decline much further. One short-term bullish ray of hope are the minor RSI divergences even as the S&P 500 tested the recent lows. 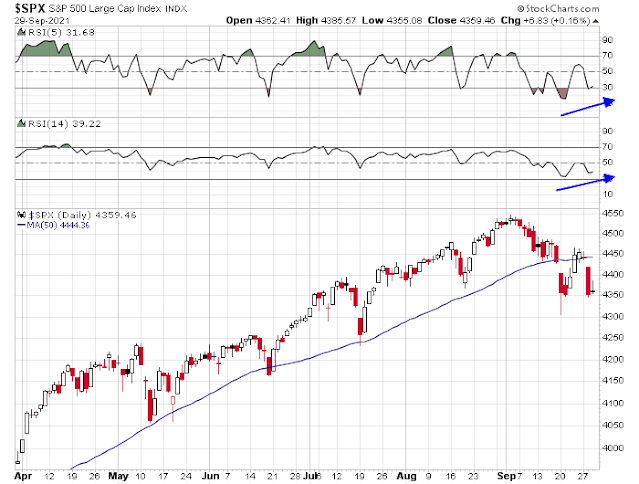 The increase in sovereign yields is likely extended in the short run, interest rates have made a turn upwards. That begs the question of how equity investors should position themselves.

The 5-year Treasury yield has been moving in lockstep with the cyclically sensitive base metals/gold ratio, which is an indication that the market is discounting a cyclical rebound and a better growth outlook.

While I would not personally recommend the purchase of the Rising Rates ETF (EQRR) because of its minuscule AUM which is an invitation for the issuer to wind up the fund, the sector exposures of EQRR is nevertheless a useful guide to how investors should position themselves for a rising rate environment, namely cyclical stocks. 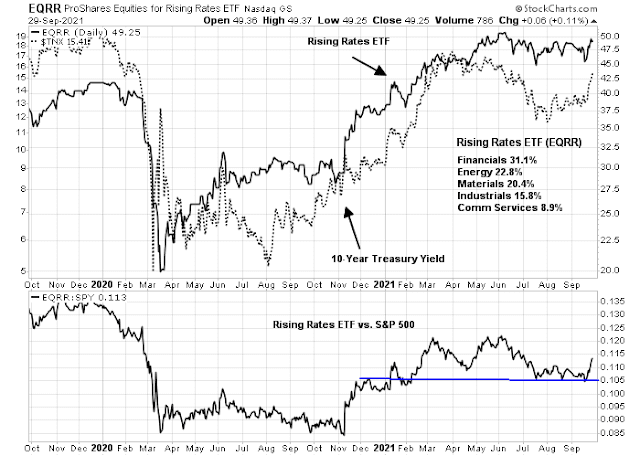 I am also keeping an eye on the semiconductor industry. These stocks are growth cyclicals and have both growth and cyclical characteristics. The industry has been stuck in a sideways pattern relative to the S&P 500 since June (bottom panel). If the market were to truly embrace the cyclical rebound investment thesis, they should stage a relative upside breakout. 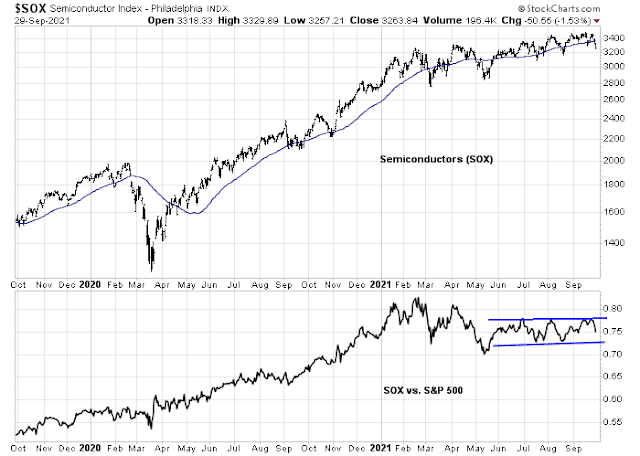