This will be the final Q1 Earnings Monitor as 88% of the S&P 500 has reported and the results are mostly known. It was a solid earnings season and beat rates are well above average. Callum Thomas of Topdown Charts observed that analysts have scrambled to revise their estimates upwards in response to earnings reports and corporate guidance. 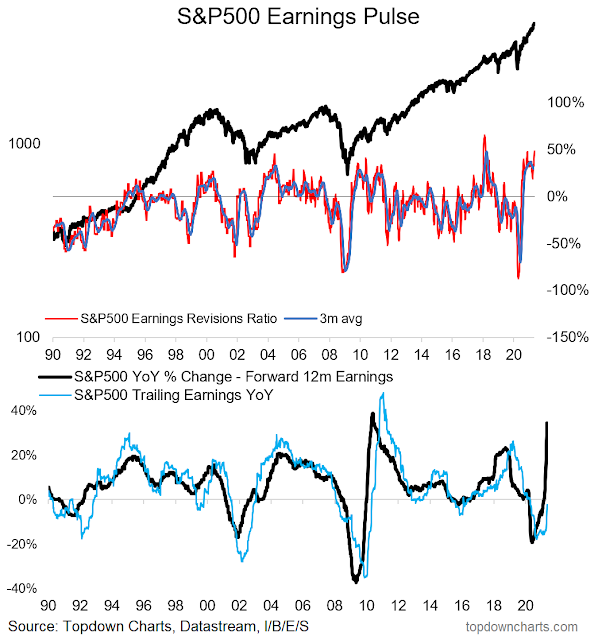 Before the bulls gets too excited, there was one puzzle in a sea of strong earnings reports. If the economy as shown by earnings is so strong, why did the April Employment Report miss expectations so badly? What are the implications for Q2 and Q3 earnings outlook?

If I had to grade this earnings season, I would give it a strong “A”. With 88% of S&P 500 having reported, investors have most of the picture. Both the EPS and sales beat rates were well above their historical averages. Street analysts revised forward 12-month EPS up by 1.26% last week, and an 2.68% the previous week. These revisions are extraordinary surges as normal weekly revisions tend to be in the 0.1% to 0.3% range. 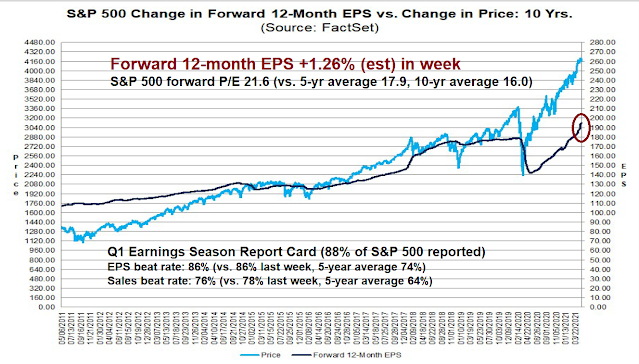 Skyrocketing EPS revisions have meant that the S&P 500 has de-rated. The forward P/E ratio has fallen because prices haven’t caught up to rising EPS estimates, which makes the market more attractively priced. 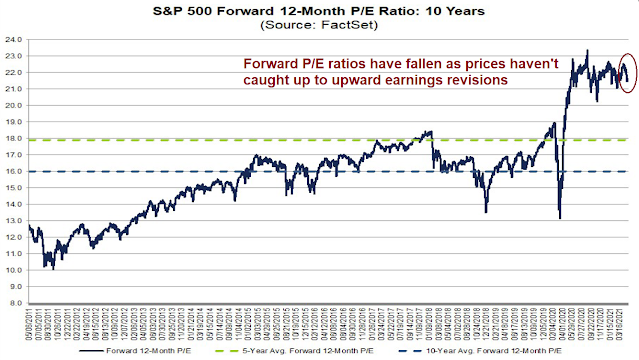 The Transcript, which monitors earnings calls, gave an equally upbeat summary of the economy:

The economy is booming and everyone should enjoy it. The American economy is benefitting from tremendous amounts of pent-up demand and in some of the hardest-hit industries’ activity is beginning to tick back up above 2019 levels. Along with that boom, there are clear signs of inflation and concerns about overheating. Even Janet Yellen seemed concerned for a few hours last week.

The economy is on fire and demand for services are rising.

The boom is good
“The boom is good. Employment is good. Growth is good. Everyone should enjoy it” – JPMorgan Chase (JPM) CEO Jamie Dimon
Americans are ready to party like it’s 1929
“Having said that the summer is going to be a free for all, you’ve seen the stats, 73% of Americans are planning a trip and the highest in history was 37. So it’s going to — America is going to party the summer like 19 — like it’s 1929.” – Starwood Property Trust (STWD) CEO Barry Sternlicht
People want to see family and friends
“As vaccination rates arise, infections fall and restrictions lift, people quickly breathe sigh of relief and start moving again. There’s pent-up demand to see family and friends. Offices, restaurants and bars are reopening, and even airports are seeing improved traffic” – Uber (UBER) CEO Dara Khosrowshahi
“I hope everybody stays healthy and positive during these times and look forward to a summer where hopefully, people can open up a little bit more and start together with loved ones and friends.” – Barings BDC (BBDC) CEO Eric J. Lloyd
There’s huge pent up demand for travel and entertainment
“There’s enormous pent-up consumer demand and with the combination of government stimulus and vaccines, that will add yet more fuel to this fire in the economy, this growth in the economy.” – Loews (L) CEO Jim Tisch
“…the booking window is very, very compressed. But again, speaking to the pent-up demand, it’s filling up quickly.” – Norwegian Cruise Line (NCLH) CEO Frank Del Rio
“I guess if you’re going to model that out, you’d probably — you’d be thrilled that your first data point is the biggest demand in history….Alongside these trends, we are seeing the effects of significant pent-up demand as fans are buying tickets and events are selling out faster than ever. In the US, Bonnaroo, Electric Daisy and Rolling Loud festivals all sold out in record times at full capacity.” – Live Nation (LYV) CEO Michael Rapino

The puzzle in an otherwise strong earnings season was the disappointing April Employment Report. If earnings calls are reporting a surge in demand for services, why did the NFP report miss expectations so badly?
The expectation was the gain of 1 million jobs. Fed chair Jerome Powell had stated in the past that he would consider either tapering or raising rates if and when the economy saw a string of strong jobs reports like the one in March, which initially came in at 916K but was revised down to 770K when the April report was released. The market interpreted his reports as a string of monthly 1 million job gains, though it wasn’t clear what “a string” meant.
Going into last Friday, Street consensus called for Non-Farm Payroll gains of about 1 million jobs, and whisper numbers went as high as 2 million. I had an inkling that expectations would be dashed when ADP Employment missed with a 742K print against expectations of 800K jobs. At a minimum, the 2 million whisper number for NFP was too high. The shocker was the actual 266K job gain against the expected 1 million gain in the NFP report.
In the wake of the big miss, analysts scrambled to dissect the internals to see if there was a data blip because of seasonal adjustments. Let’s begin with the bad news. Female employment fell, and so did the female participation rate. This may be an indicator that women cannot return to the labor force because of child care responsibilities. 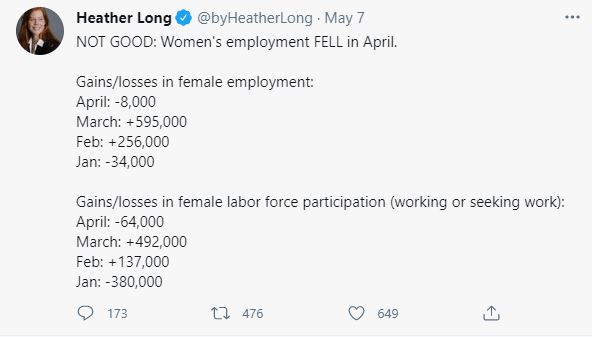 As expected, jobs returned in low-paying service jobs like the leisure and hospitality industry, but there were significant declines in manufacturing, transportation and warehousing, and professional and business services. Were those data anomalies, or were the declines related to supply chain bottlenecks? 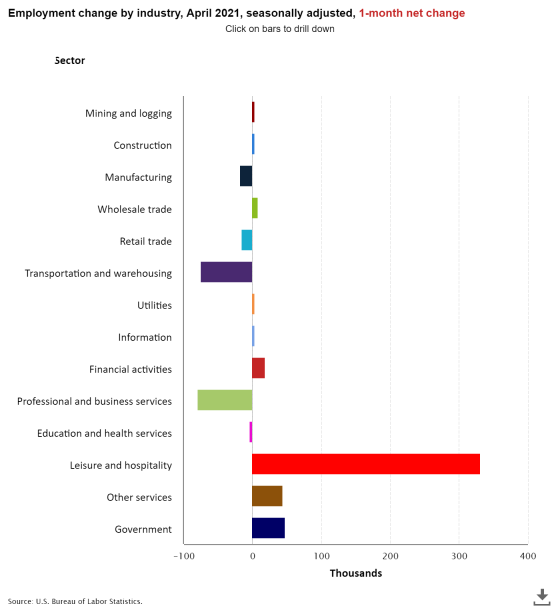 Other data anomalies cried for explanations. With lumber prices skyrocketing owing to constraints in mill capacity, why did wood products employment fall? Equally puzzling was the job loss by couriers and messengers. 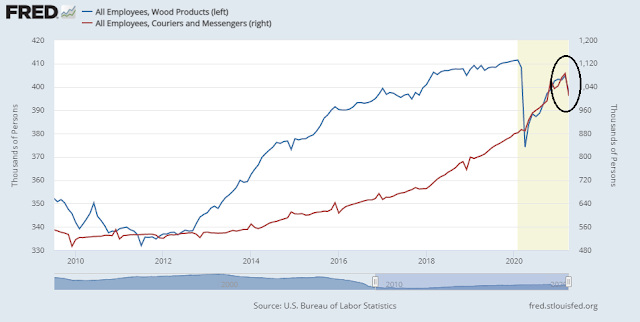 If the NFP print was so ugly and below expectations, why were employees leaving their jobs at a higher rate? These data anomalies smell like a data blip or a problem with the seasonal adjustment with the headline NFP release. In all likelihood, these figures will be revised upwards in the coming months.

There was also the back-and-forth political discussion about the difficulty of finding help. Employers complained about lazy people staying home because of high unemployment benefits, which led to the retort of when demand is greater than supply, prices rise. However, RSM US economist Joseph Brusuelas observed that Treasury Secretary Janet Yellen pointed out that the thesis of UI inhibiting job growth was inconsistent with the data. 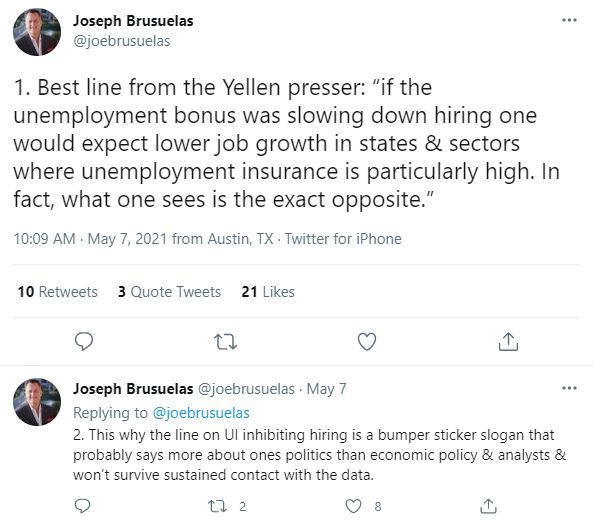 Heather Long at the Washington Post suggested that some of the labor market weakness may be explained by people seeking to upgrade their jobs.

There is also growing evidence — both anecdotal and in surveys — that a lot of people want to do something different with their lives than they did before the pandemic. The coronavirus outbreak has had a dramatic psychological effect on workers, and people are reassessing what they want to do and how they want to work, whether in an office, at home or some hybrid combination.
A Pew Research Center survey this year found that 66 percent of the unemployed had “seriously considered” changing their field of work, a far greater percentage than during the Great Recession. People who used to work in restaurants or travel are finding higher-paying jobs in warehouses or real estate, for example. Or they want a job that is more stable and less likely to be exposed to the coronavirus — or any other deadly virus down the road. Consider that grocery stores shed over 49,000 workers in April and nursing care facilities lost nearly 20,000. 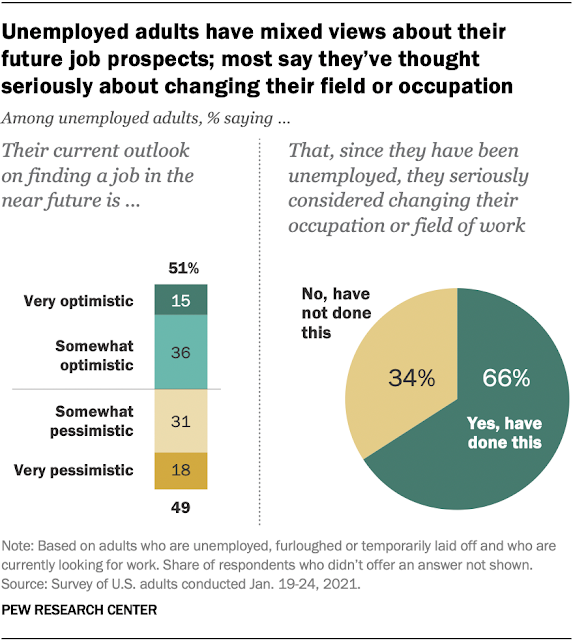 Arguably, the wage pressure could be partly attributable to people who lost their jobs during the GFC but were unable to replace them with similar wage levels. They are now taking advantage of the tighter job market to return to their past levels that were previously lost.

Reading between the lines, I interpret these results to mean a stronger labor market than shown in the headlines. However, wage pressures are rising, and it is an open question whether they will persist, or they are part of a supply chain bottleneck that will be resolved in the coming months. Bottlenecks are not wage-price spirals.
The unemployment rate is still elevated at 6.1%. Historically, this has led to strong stock market gains. 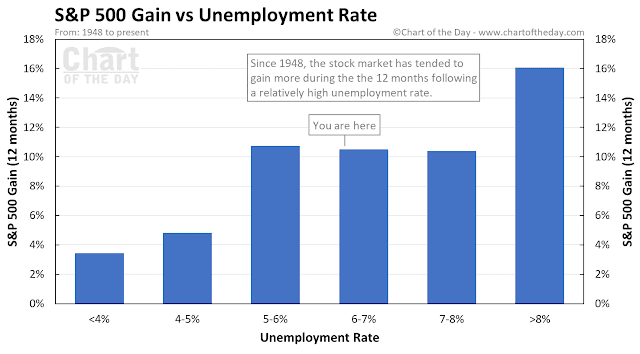 As well, US employment is still well below pre-pandemic levels. There is still considerable slack and a longer runway to recovery. 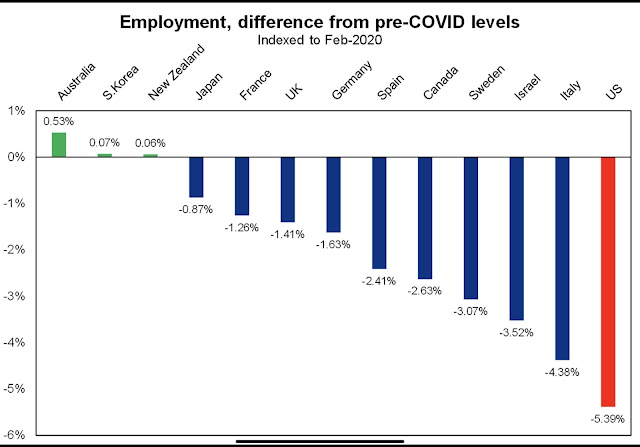 This leads me to a nuanced bullish interpretation of equity prices. Forward 12-month EPS estimates have outpaced stock prices in recent weeks, which is constructive. A more detailed analysis by sector shows that the best earnings surprises have mostly been in value sectors, while the worst have been in defensive sectors. 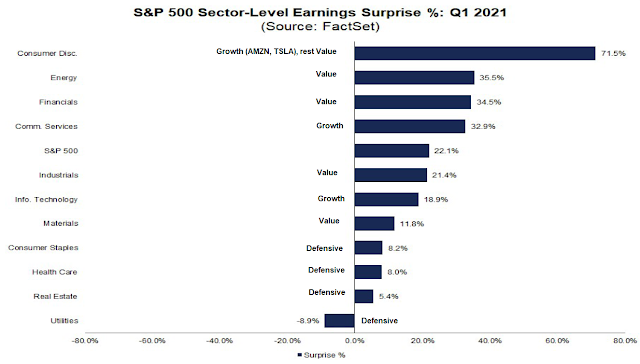 As the energy sector has no earnings, my analysis has focused on expected Q2 revenue growth. The top four sectors by expected revenue growth have value and cyclical characteristics. 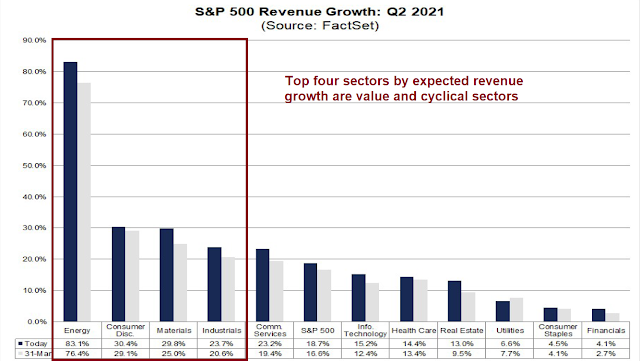 In conclusion, the Q1 earnings season has been very strong. I wrote last week that the market was priced for perfection (see Q1 Earnings Monitor: Priced for perfection), but this is still a bifurcated market. It’s growth stocks that are most vulnerable to disappointment. By contrast, most of the growth and positive surprises have been in the sectors with value and cyclical characteristics. As EPS estimates rise, they will be compress forward P/E multiples which should be supportive of higher stock prices.  Investors should therefore overweight value over growth as estimate upgrades are coming from predominantly value and cyclical stocks. 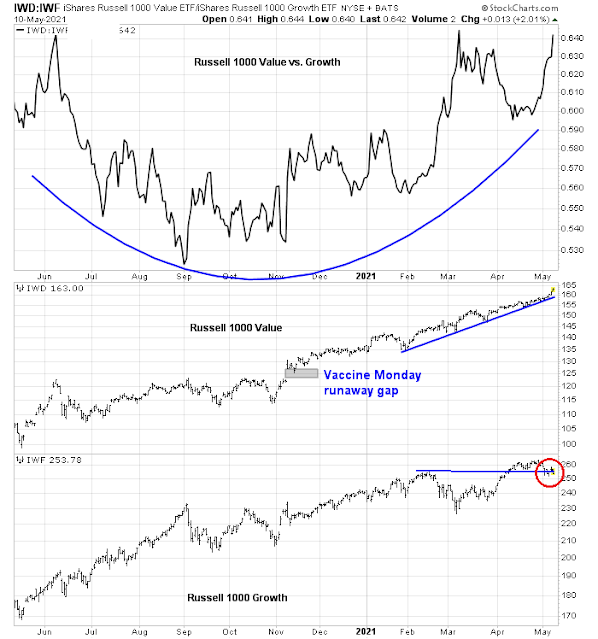