A stealthy growth correction – Humble Student of the Markets 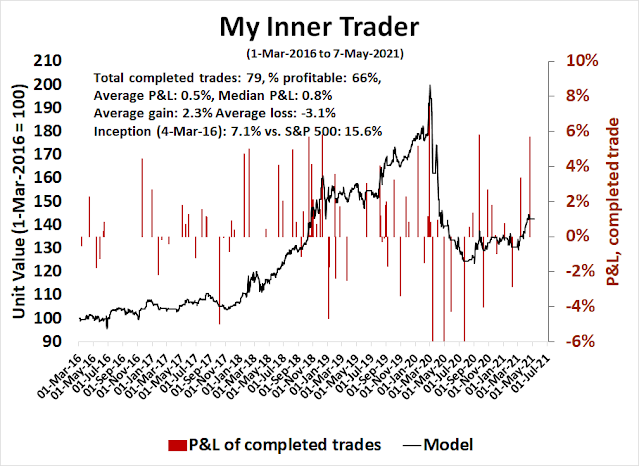 “Many of the ARK and similar funds that hold high growth stocks are now trading between one and two standard deviations below their 50[-day moving averages] where buyers usually enter,” said technical analyst Andrew Adams in a Wednesday note for Saut Strategy. “I don’t think the market needs to go down any more, so a bounce attempt should occur given all the nearby support levels.”

Since the publication of that article, ARKK and other growth stocks have weakened further relative to the S&P 500.

The growth-heavy NASDAQ 100 bounced off a test of its 50-day moving average (dma) after being rejected twice at resistance. More worrisome is the breach of the relative support zone of NDX compared to the S&P 500 and ARKK to the S&P 500. Market internals such as the percentage of NASDAQ 100 stocks above their 50 dma is not oversold enough to signal a durable bottom. 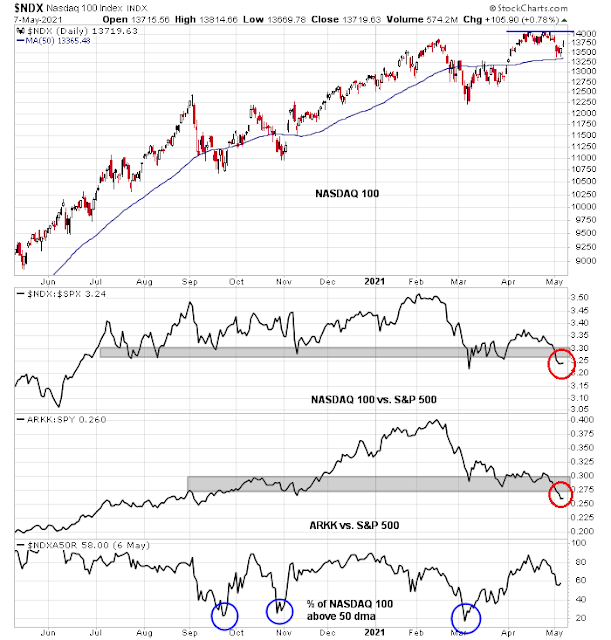 On the other hand, value stocks have been resilient and holding up the market. The value to growth ratio is soaring, though a little overbought. The Russell 1000 Value index remains in a well-defined uptrend while the Russell 1000 Growth index is struggling with a key support line. 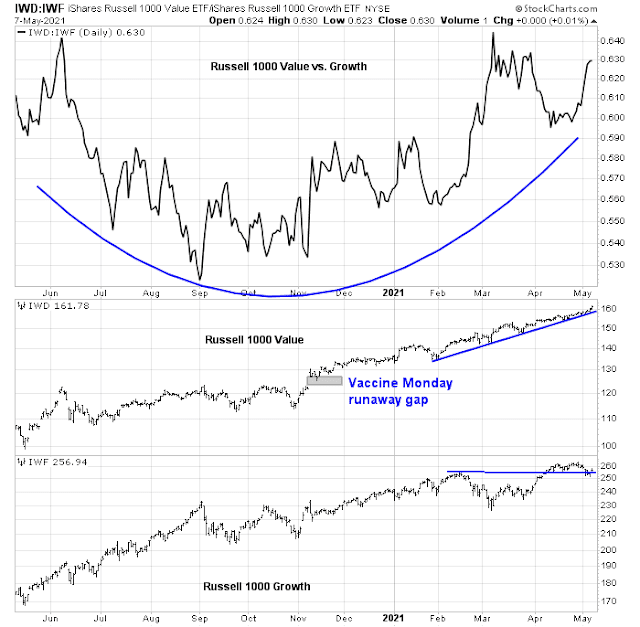 A review of the relative strength of the top five sectors tells the story of a bifurcated market. In aggregate, these sectors account for roughly three-quarters of S&P 500 weight and it would be difficult for the index to rise or fall without the participation of a majority of these sectors. Growth sectors, such as technology, communication services, and float-weighted consumer discretionary stocks, which are dominated by heavyweights AMZN and TSLA, are underperforming the S&P 500. By contrast, value sectors such as financials and equal-weighted consumer discretionary stocks are strong. 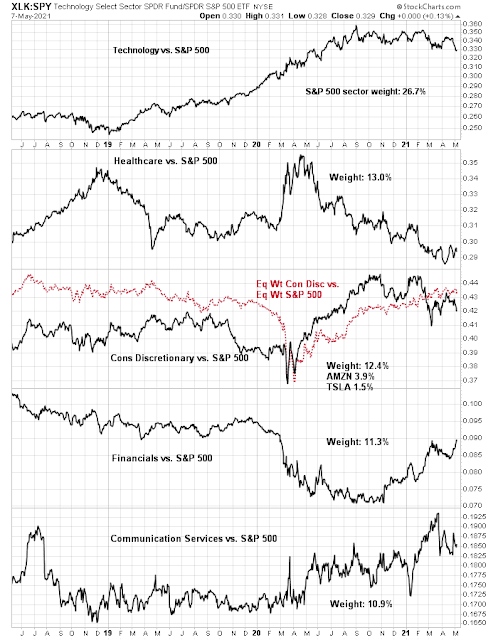 The bears haven’t seized control yet

However, there are no signs of significant technical breakdowns just yet. The relative strength of defensive sectors is strong indicating that the bears haven’t seized control of the tape. 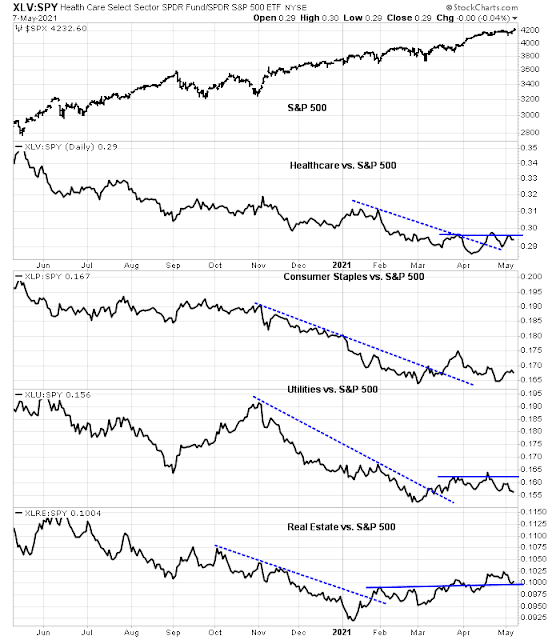 To be sure, there are some warning signs. Mark Hulbert pointed out that the Shiller Crash Confidence Index, which measures whether investors are worried about a stock market crash, has declined precipitously. Hulbert concluded that ” the outlook for the next six- and 12-month periods would appear to be quite modest”, 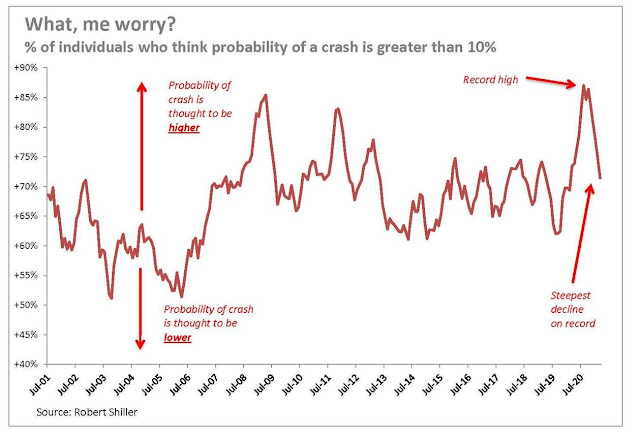 The bond market has caught a bid and it is attempting an upside breakout from a possible inverse head and shoulders formation.

Both gold and silver have staged upside breakouts. Precious metals tend to be viewed as defensive and negative beta plays. 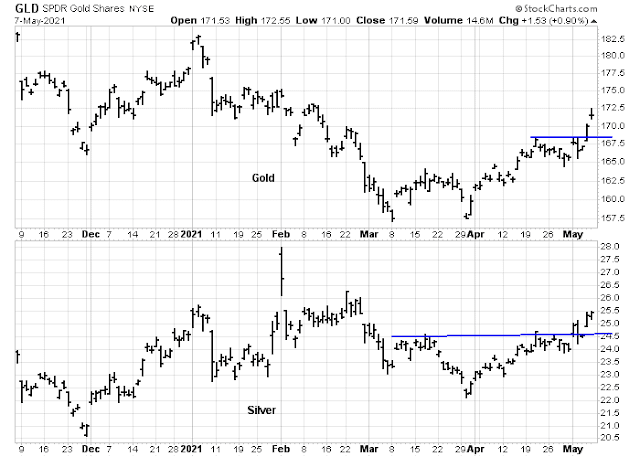 Billionaire investor Sam Zell is seeing inflation everywhere, and has bought gold as a hedge — something he says he used to knock others for doing.

“Obviously one of the natural reactions is to buy gold,” he said in a Bloomberg Television interview. “It feels very funny because I’ve spent my career talking about why would you want to own gold? It has no income, it costs to store. And yet, when you see the debasement of the currency, you say, what am I going to hold on to?”

Zell, 79, said he’s concerned not only about the U.S. dollar but other countries printing money as well, and questioned whether inflation will be transitory, as Federal Reserve Chairman Jerome Powell indicated last week.

I conclude from this analysis that while there are downside risks to the S&P 500, the weakness is only confined to growth stocks. Value stocks are still strong and they are holding up the index. My base case scenario calls for a period of choppy sideways consolidation for the S&P 500. Until a bearish catalyst appears for value stocks, which have cyclical characteristics, the overall market should hold up well.
In the short-run, the S&P 500 is overbought and due for a pullback early in the week. I am watching to see how the market behaves after the overbought condition is resolved later in the week. 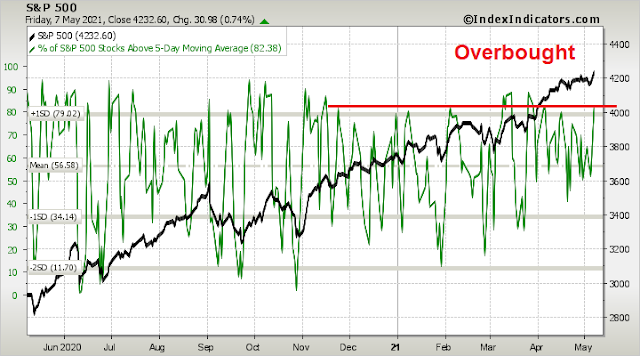 I will be especially monitoring the price action of the growth-cyclical bellwether Semiconductor Index (SOX). SOX rallied last week after testing a rising uptrend to regain the 50 dma. However, the 50 dma has stopped rising and it is on the verge of falling, indicating the possible start of a downtrend for the group. Moreover, SOX breached an important long-term relative uptrend against the S&P 500. 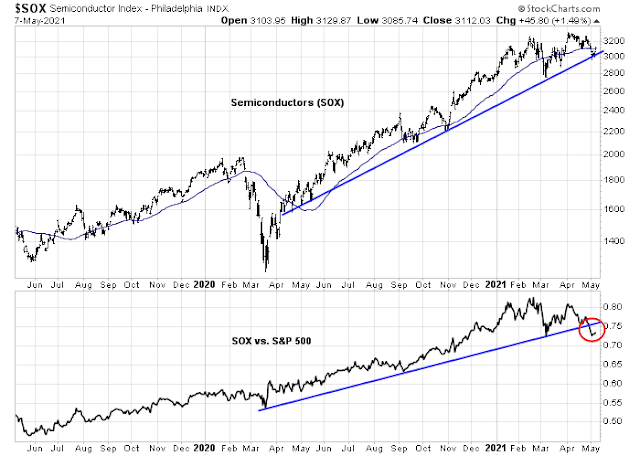 25 thoughts on “A stealthy growth correction”