We are well into Q1 earnings season. 60% of the S&P 500 has reported their results and the top and bottom line beat rates are well above average. The V-shaped recovery is complete. 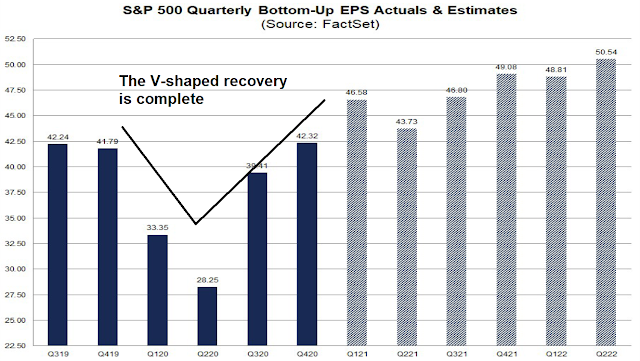 Here is the more difficult question. The six largest companies in the S&P 500 reported last week and all of them beat consensus EPS expectations. Why was the S&P 500 flat last week?

Even though FactSet reported that the market rewarded EPS beats and punished misses, there was a subtle component that can’t be seen in the statistics. The new focus of the market seems to be concerns over production bottlenecks. 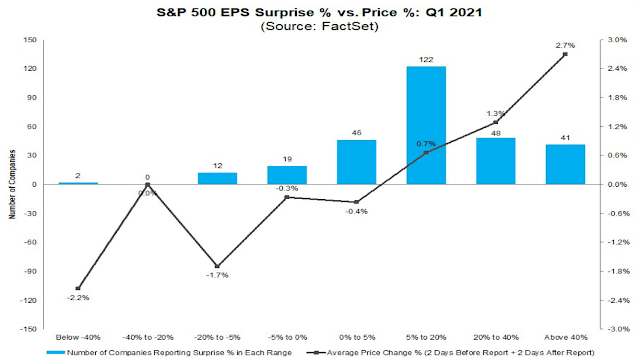 The market reaction to services companies and companies with manufacturing components is revealing about market psychology. Alphabet and Facebook, which depend mainly on advertising revenue, reported strong sales and EPS figures. The stocks rose after their reports.
By contrast, Apple also beat estimates but reported production issues owing to the chip shortage. Its shares closed in the red the next day. Yahoo finance reported that Caterpillar, which is a global cyclical bellwether, also reported strong earnings, but warned about chip shortages constraining sales. Its shares also weakened after the earnings report.

Caterpillar Inc. is warning of potential impacts ahead due to a global chip shortage, putting a damper on better-than-expected earnings for the world’s biggest maker of mining and construction equipment.
“Although we haven’t been impacted yet, the global semiconductor shortage may have an impact later this year,” Chief Financial Officer Andrew Bonfield said in a Thursday interview. “It’s a risk and obviously we’re keeping a close eye on it.”
The cautionary words come after Caterpillar posted first-quarter revenue and profit that topped analysts’ estimates, in what Bonfield described as “very strong performance” for the start of the year fueled by construction growth in the U.S. and China.
Caterpillar joins some of the world’s biggest automakers and tech giants in highlighting the impacts of a chip shortage that’s already caused Honda Motor Co. to halt output at Japanese plants and Apple Inc. and Samsung Electronics Co. in flagging production cuts and lost revenue.
The shortfall comes as Caterpillar expects a big ramp up in machinery production through the rest of the year. While the company has been able to mitigate the issue so far, Bonfield said such shortages could mean Caterpillar may not be able to fully meet demand from its customers this year.
Caterpillar’s quarterly results surpassed Wall Street’s expectations, with sales jumping 12% to $11.9 billion in the period and per-share adjusted earnings of $2.87 topping the $1.95 a share average estimate of analysts’ estimates compiled by Bloomberg.

Not only are shortages of semiconductors creating supply chain bottlenecks, but other shortages such as lumber mill capacity and even chicken production are driving up input prices.

The challenge for the bulls

The bulls face a valuation challenge. The S&P 500 forward P/E ratio, which currently stands at 22.0, hasn’t changed much since the onset of the pandemic. 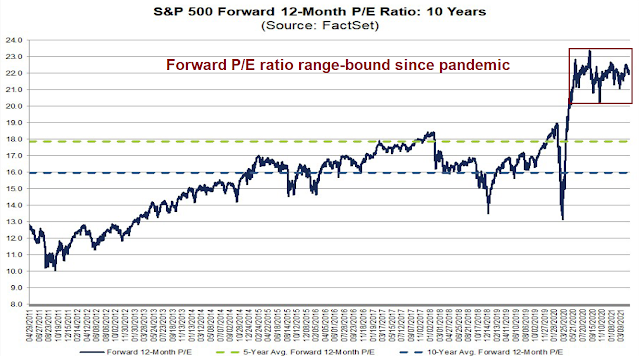 On the other hand, the S&P 500 has risen 90.1% since the March lows, excluding dividends. If the forward P/E ratio was largely unchanged during this period, that means it was rising EPS estimates whichhave driven the market rebound. 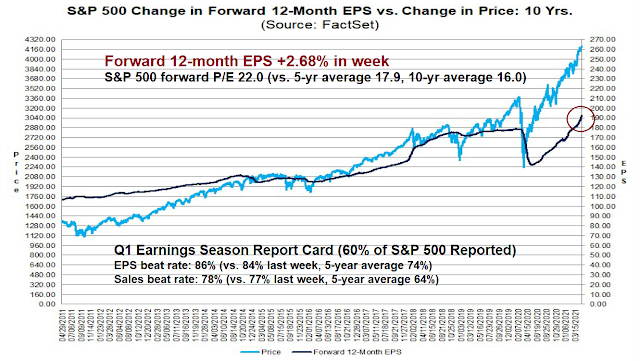 While forward EPS estimates have surged during Q1 earnings season, can they keep rising at their torrid pace as supply chain bottleneck worries emerge?

In short, the market is priced for perfection. Many market participants are already in crowded longs, which is creating headwinds for further price advances. Charlie McElligott at Nomura observed that CTAs are already at a crowded long and their positioning is highly correlated to PMI, which is already extremely elevated. 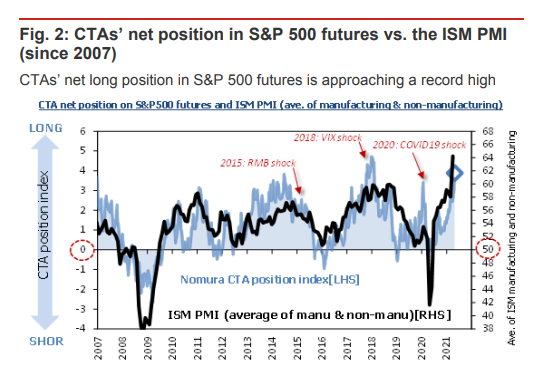 As I pointed out last week (see Q1 earnings monitor: Reopening giddiness), top-down and bottom-up expectations are coming into conflict. While bottom-up estimates are rising, the top-down outlook is more cautious.
As one of many examples, the ECRI’s Weekly Leading Indicator is rolling over and coming off the boil. 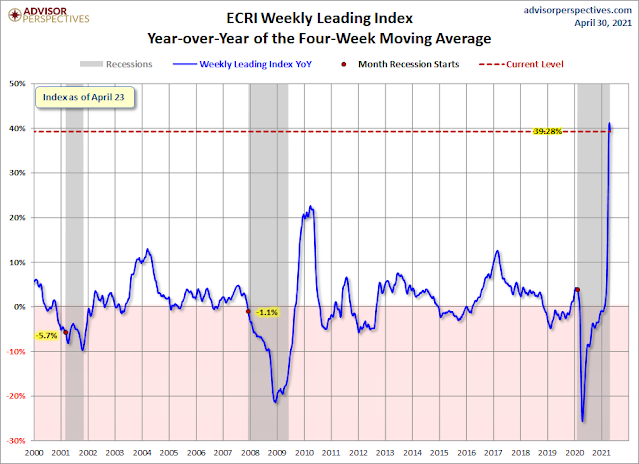 I reiterate my warning that risks are rising for the stock market. You can tell a lot about market psychology by how the market reacts to the news. The six largest stocks in the S&P 500 reported last week and they all beat consensus estimates, but the index was flat. This is a classic warning that expectations are too high.
Semiconductor stocks are important bellwethers because they are in a growth-cyclical industry. These stocks should be performing well as they are beneficiaries of the chip shortage. Instead, the Semiconductor Index (SOX) violated an important rising relative trend line against the S&P 500, and the violation is more visible when measured against the NASDAQ 100. 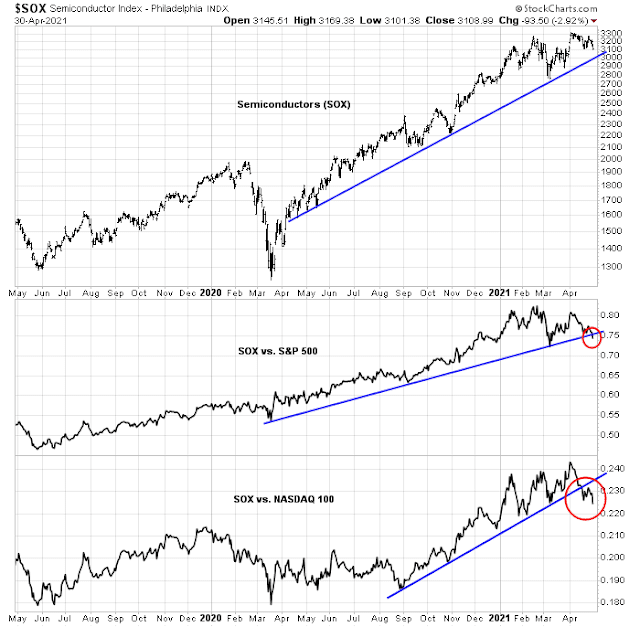 These are all warnings that the stock market is poised for a pullback. Expectations are too high and the market is priced for perfection. A “Sell in May” strategy may be a useful investment template for the next few months.