What “Sell in May” really means – Humble Student of the Markets 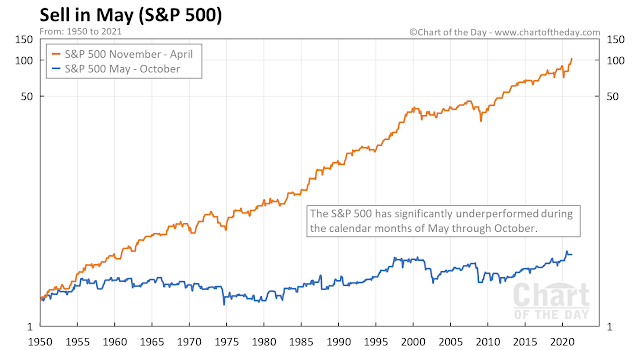 While it’s not advisable to trade strictly on seasonality, investors might want to be extra cautious with their equity allocations this year.

So far, what we have are bearish setups, but no definitive signs of downside breaks.
Callum Thomas observed that the ratio of leveraged long to short equity ETF volume is highly extended and in the “risk zone”. 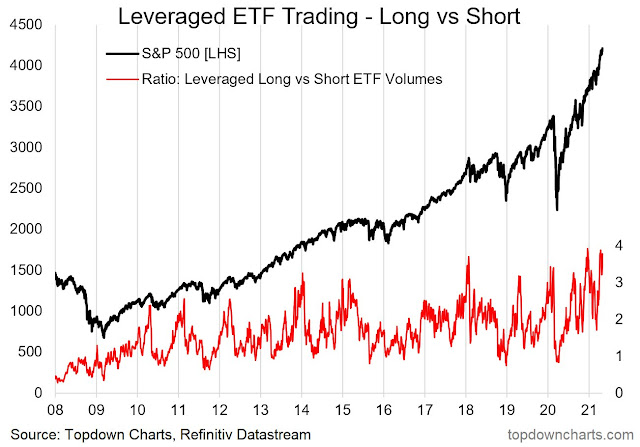 Ryan Detrick pointed out that the stock market has paused its rally about now when coming off the recessions of 1982 and 2008.

However, these are all only cautionary signs and none of them are signals to sell everything or to go short the market.

Not bull nor bear, but a roller coaster

Even though I have warned about rising risk in the past few weeks. Neither the bulls nor the bears have gained the upper hand.
The stock market sold off yesterday (Tuesday) when Treasury Secretary and former Fed chair Janet Yellen said, “It may be that interest rates will have to rise somewhat to make sure that our economy doesn’t overheat.” It recovered later in the day when she walked back those remarks and it recovered further today. From a technical perspective, the VIX Index spiked above its upper Bollinger Band yesterday, which is an indication of an oversold market. In the past, such VIX upper BB episodes have either signaled the start of a correction, or a once-and-done downdraft. Today’s recycle of the VIX suggests yesterday’s weakness was of the latter variety. 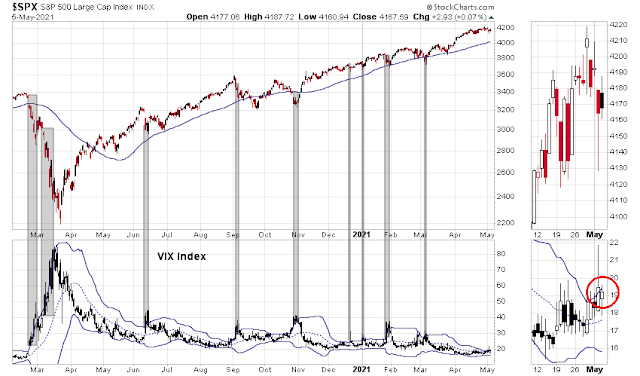 Investors need to be prepared for a roller-coaster market with choppy price behavior. Sure, there are some signs of wobbles. The most worrisome is the violation of the relative uptrend by semiconductor stocks. Semiconductors are growth cyclicals, and they should be beneficiaries of the chip shortage. Their poor relative strength is an early warning that risk appetite is on the decline. 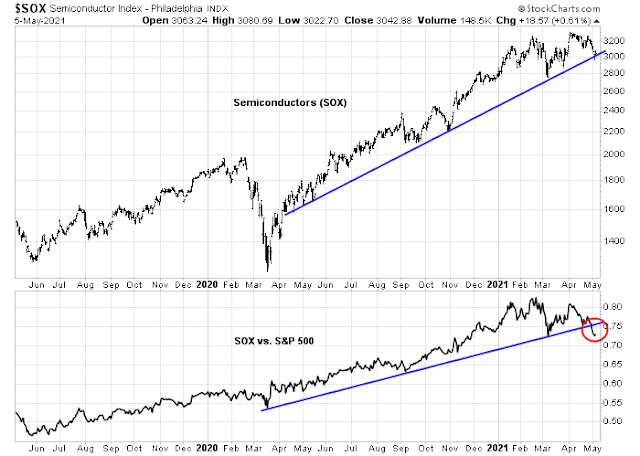 On the other hand, a review of other cyclical sectors and industries shows that the poor relative strength of semiconductors is an anomaly. Other cyclicals remain in relative uptrends. 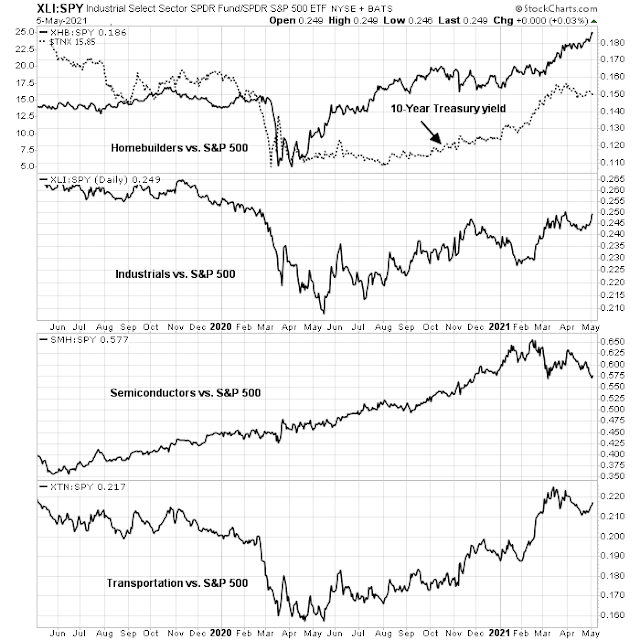 As I have pointed out before, this is an increasingly bifurcated market. Growth stocks are struggling while value stocks are performing reasonably well. The Russell 1000 Value Index remains in an uptrend while the Russell 1000 Growth Index has violated a keys support level. 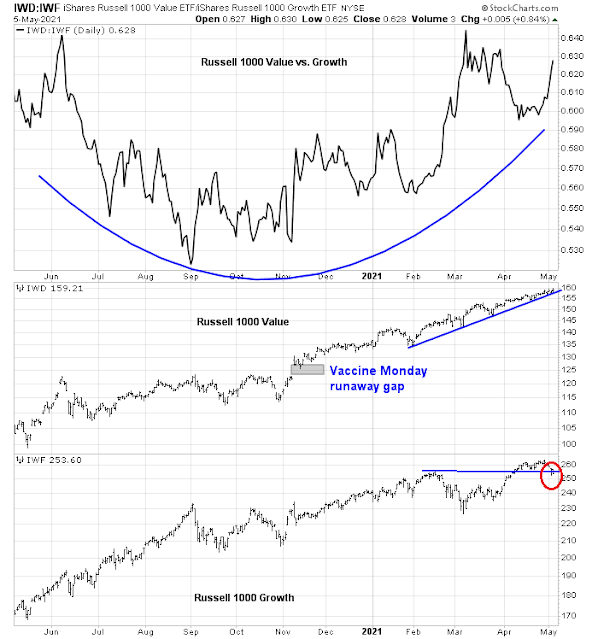 I conclude from this review that the stock market is vulnerable to a setback but it’s not quite ready to correct just yet. In order for the market to correct, the value and cyclical sectors need to face a growth scare.
That growth scare may occur as the Chinese economy slows. Real-time market data are suggestive of a China slowdown. The AUDCAD exchange rate is testing a keys support level. Both Australia and Canada are resource exporters. Australia is more sensitive to China while Canada is more levered to the US economy. The weakness in the AUDCAD rate is an implicit signal of slowing Chinese growth.

As well, the stock markets of China and her major Asian trading partners are not behaving well when measured against the MSCI All-Country World Index (ACWI). MSCI China has violated a relative support line, and so has South Korea. The rest are exhibiting weakening or range-bound patterns. (All prices are in USD). 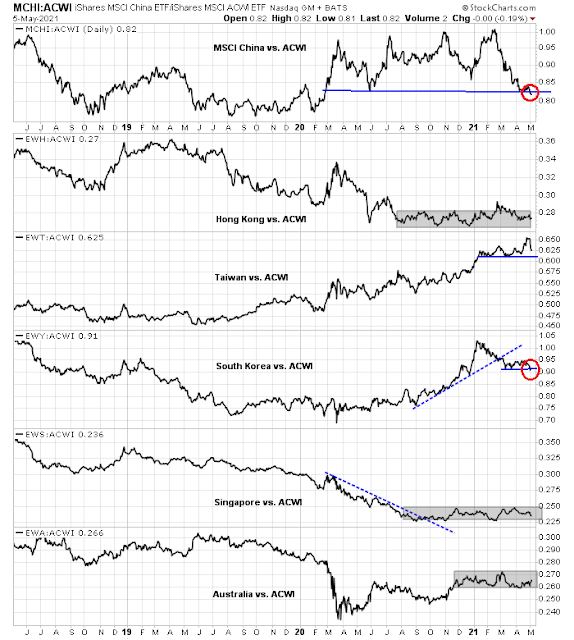 The Trend Asset Allocation Model is still bullish and it is not designed to spot minor (5-10%) corrections. My inner investor is therefore bullishly positioned, though he has sold covered call options against selected existing positions.
My inner trader is on the sidelines. The long-term trend for stock prices is still up. The risk/reward ratio of trying to short the market without a definitive downside break is unfavorable.
In short, I am cautious, but not bearish.

36 thoughts on “What “Sell in May” really means”