Mid-week market update: Is the bond market panic over yet? The 10-year Treasury yield touched a high of 1.6% last week. It fell when the Reserve Bank of Australia began to engage in yield curve control, but it is edging back towards 1.5% again. 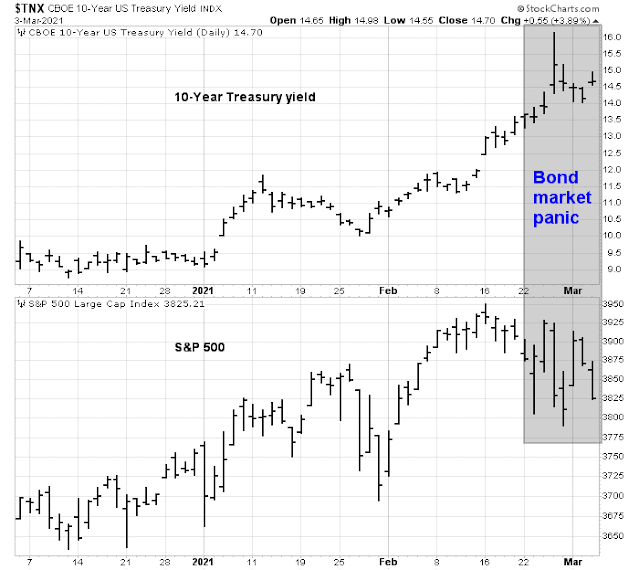 Based on this week’s market action, I conclude that stock prices have unfinished business, both on the upside and downside.

I pointed out last week how the NASDAQ 100 (NDX), which was the worst hit of the major indices, was oversold on the NASDAQ McClellan Oscillator (NAMO). The NDX staged a strong relief rally on Monday but retraced all of the gains. Is the recovery over? Probably not yet. The historical experience indicates that the relief rally window usually at least a week. The current pattern may be setting up for a double bottom, with further relief rallies in the coming days. 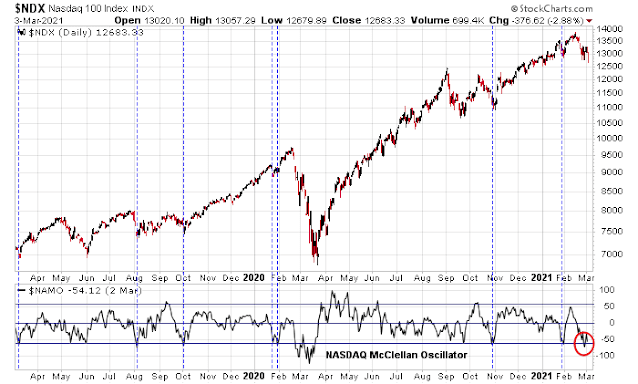 The analysis of short-term breath is supportive of my case for further strength. While oversold markets can become oversold, significant near-term downside risk is unlikely. 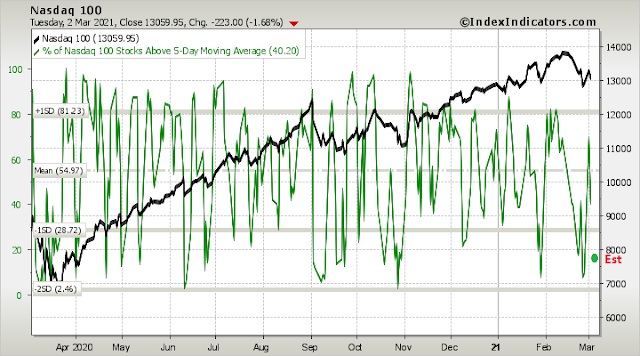 The market’s risk/reward is tilted to the upside, at least for the next few days.

When I look beyond the short time horizon of a relief rally, the market faces significant downside risks. Simply put, investor sentiment is too bullish for the market to rise.
Helene Meisler conducts an (unscientific) weekend Twitter poll. I was surprised to see that even though stock prices tanked last week, bullish sentiment rose, which is contrarian bearish. 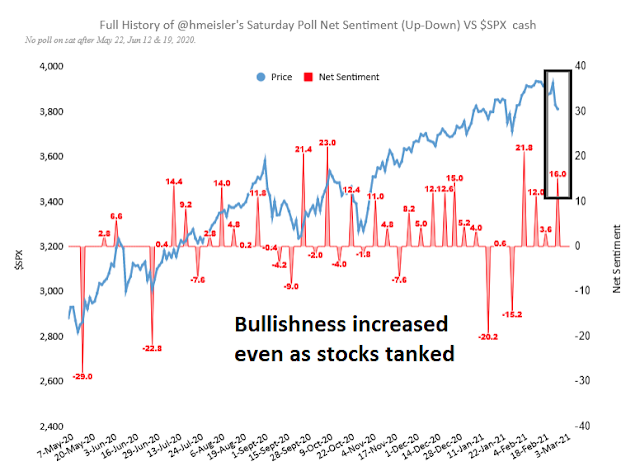 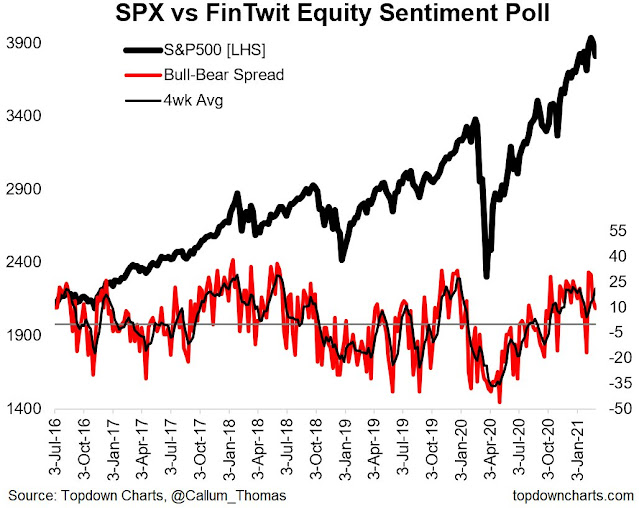 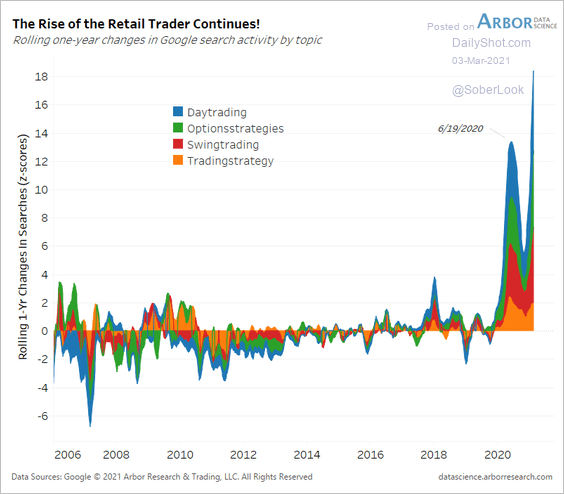 The risk of a disorderly ARK unwind

Another key risk to the market is the possibility of a bear raid on Cathie Wood’s ARK holdings. Both NDX and ARKK remain in relative downtrends against the S&P 500, indicating a failure of leadership. 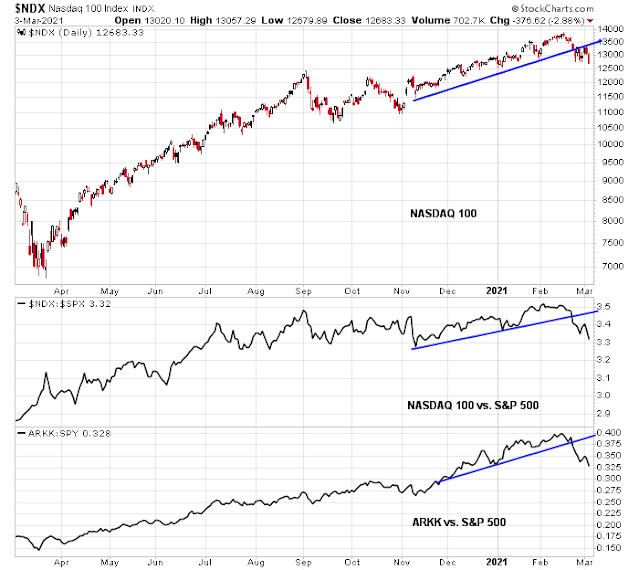 Bloomberg reported that ARK holds a number of illiquid positions that could be subject to selling pressure by hedge funds and other fast-money participants.

Ark now owns more than 10% of at least 29 companies via its exchange-traded funds, up from 24 just two weeks ago, according to data compiled by Bloomberg.
Less discussed are holdings of Nikko Asset Management, the Japanese firm with a minority stake in Ark that it has partnered with to advise on several funds.
When combined, the pair own more than 25% of at least three businesses: Compugen Ltd., Organovo Holdings Inc. and Intellia Therapeutics Inc. Together they control 20% or more of an additional 10 companies.

The list below shows ARK’s 18 most illiquid holdings, as measured by the number of trading days it would take ARK to exit its position. ARK a precarious liquidity trap with these positions that represent about 20% of NAV. So far, these stocks haven’t seen significant selling pressure yet. In short, the ARK organization is apparent lacking in risk management control, but it may be only a matter of time its holdings experience a disorderly “flash crash” as the combination of selling pressure and redemptions threaten Cathie Wood’s franchise.

As well, the NYSE McClellan Summation Index (NYSI) reached an overbought reading of over 1000 and recycled late last year. In the past, the stock market has found difficulty finding a base until NYSI reaches a neutral condition of between -200 and 200, which hasn’t happened yet. 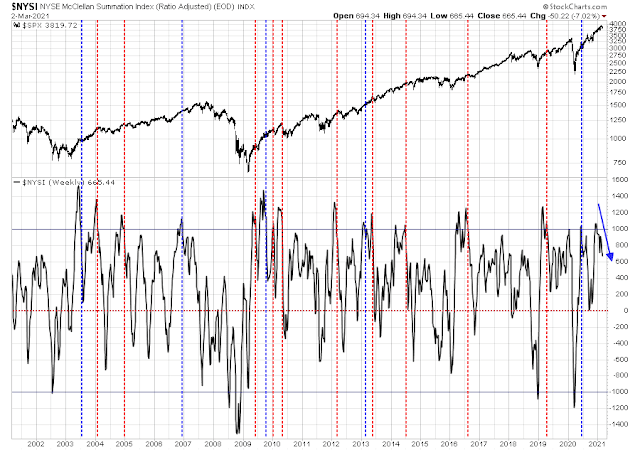 Tom McClellan also observed that the market was close to flashing a Hindenburg Omen this week. 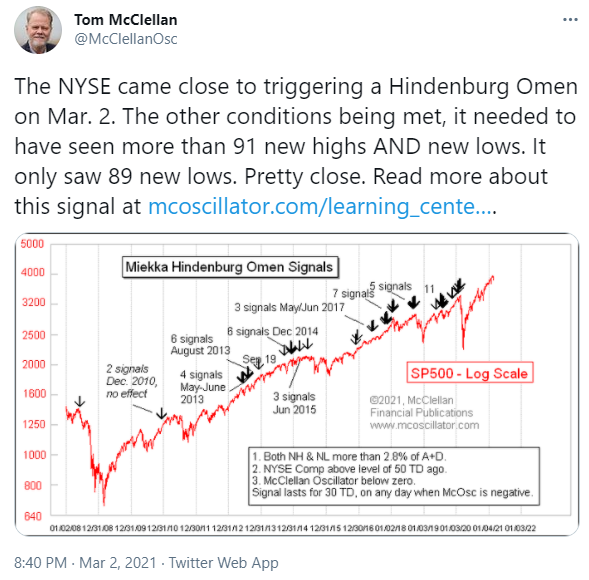 Despite its name, Hindenburg Omens have had an extremely spotty record at forecasting market crashes. I concluded in 2014 that such signals were indicative of market indecision and potential volatility (see The hidden message of the Hindenburg Omen).

The Hindenburg Omen indicator has a lot of moving parts and it is therefore confusing. I believe that the most important message in the Hindenburg Omen is the expansion of both new highs and low, indicating divergence among stocks and points to market indecision.

The NDX is tracing out a possible head and shoulders formation, but as good technicians know, these patterns are not complete until the neckline actually breaks. The index is now testing neckline support while exhibiting a positive 5-day RSI divergence. My base case scenario calls for a rally, followed by weakness and a likely break of the neckline. 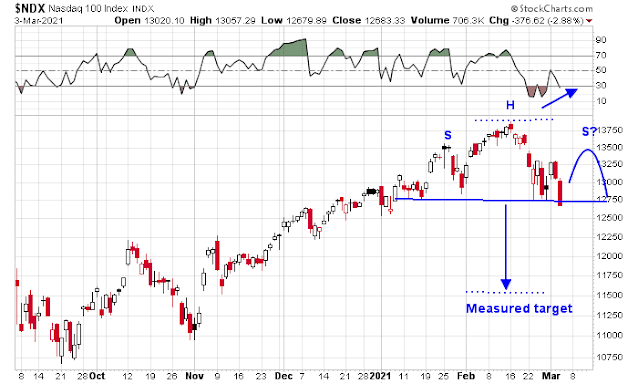 In summary, there are reasons to be both bullish and bearish, but on different time frames. In the short-run, the relief rally hasn’t run its course just yet and more upside is possible. Once the market works off the momentum from an oversold rally, it faces further downside risk from the combination of excessively bullish sentiment and unfinished business to the downside from a technical perspective. At a minimum, expect choppiness and volatility in the weeks ahead.