Time for another year-end FOMO stampede? – Humble Student of the Markets

In late 2017, the stock market melted up in a FOMO (Fear Of Missing Out) stampede as enthusiasm about the Trump tax cuts gripped investor psychology. The market corrected in early 2018 and rose steadily into October, though the advance could not be characterized as a melt-up. In late 2019, the market staged a similar FOMO stampede and the rally was halted by the news of the pandemic spreading around the world.

In each of the above cases, the Fear & Greed Index followed a pattern of an initial high, a retreat, followed by a higher high either coincident or ahead of the ultimate stock market peak. 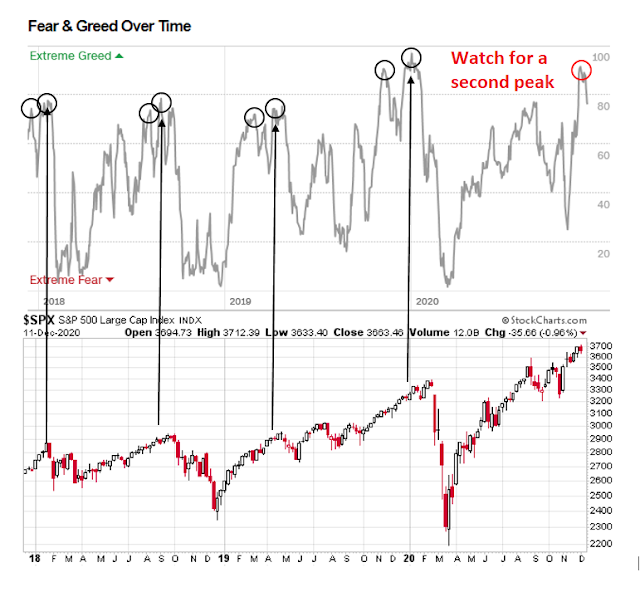 It’s starting to look that way. Evidence is emerging that the stock market is at the start of a new cyclical bull. Exhibit A is the Dow Jones Industrials Average and Transportation Average. Recently, both made fresh all-time highs. That’s a Dow Theory buy signal, a classic indicator of a new bull market. 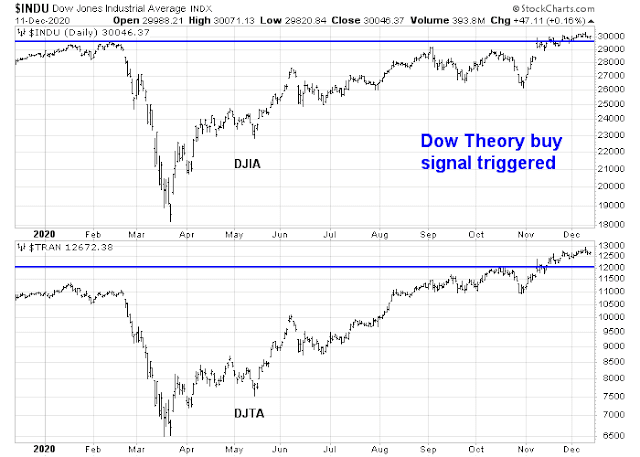 The economy is starting to turn up from a top-down macro perspective. The tsunami of monetary stimulus has produced a surge in M2 growth, it was an open question of when any of the money growth would affect the economy. M2 monetary velocity is finally turning up. This is a signal of a growth revival. (Recall PQ = MV). 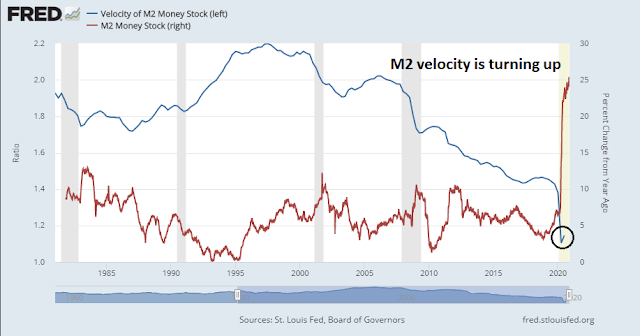 The latest update from FactSet shows that earnings estimates are recovering strongly. 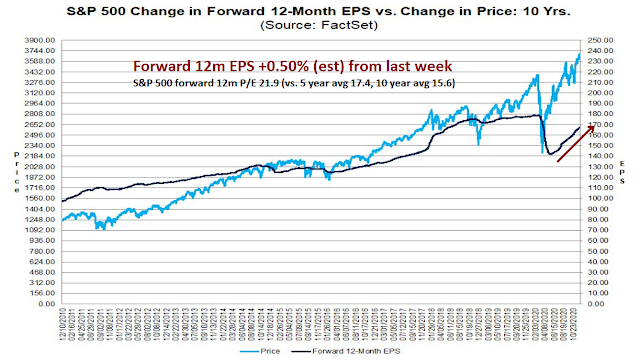 Marketwatch reported that Goldman Sachs strategists headed by Alessio Rizzi believe that a sizable correction is not on the immediate horizon. To be sure, many sentiment indicators are at historical highs, but that should not be a major concern because of the positive macro environment.

Rizzi and his team said that indicators like put/call ratios tend to provide the most useful signals of where the market is moving when they are extreme, and that “that bullish positioning levels tend to remain strong for a long period if macro remains supportive.”

The macro environment may be headed in that direction. The European Central Bank increased stimulus on Thursday, and Treasury Secretary Steven Mnuchin is offering a $916 billion stimulus package to Congress to try to break a legislative deadlock. 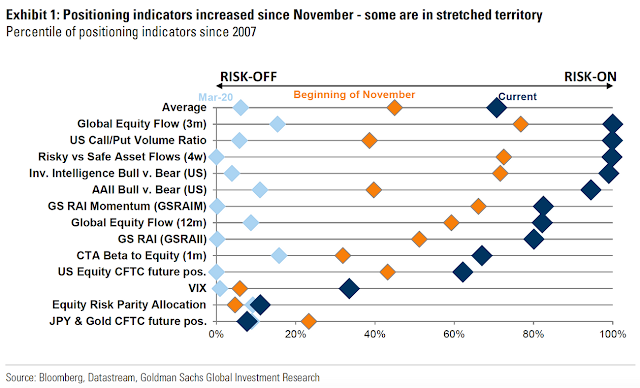 In other words, buy the dip!

Indicators of institutional positioning are supportive of further market gains. John Authers recently highlighted the results of a “global survey of institutions by Natixis SA, which interviewed 500 managers” which found an unexpected level of guarded cautiousness among respondents.

Of these, 79% don’t expect GDP to have recovered to its pre-Covid levels by the end of next year, making them more bearish than typical sell-side researchers…There is a belief in a rotation toward value, but that co-exists with a belief that geopolitical tensions will worsen, amid rising social unrest, as democracy weakens. Both socially and economically, the people running very large institutions plainly believe the market is ahead of itself in expecting the effects of the pandemic to soon be vanquished: 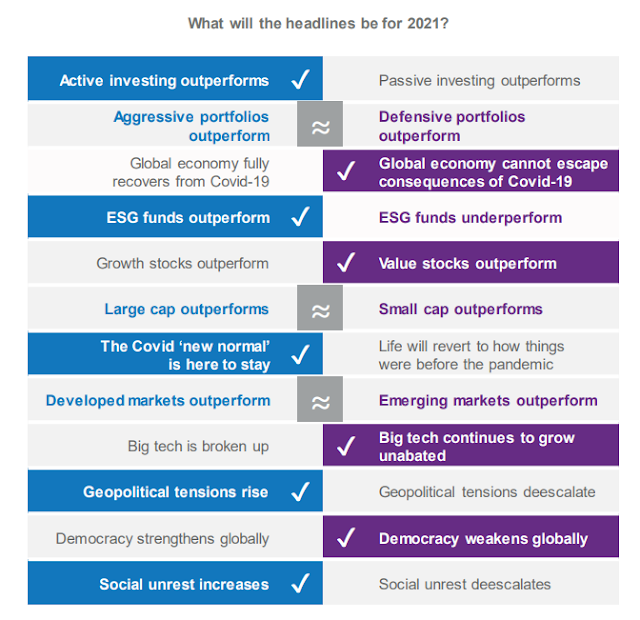 Data from State Street, which aggregates the positioning of its institutional custodial clients, confirms this assessment of institutional cautiousness. Overall market beta has improved off the bottom, but readings are still below the historical par level of 100.

As well, BoA reported that S&P 500 e-mini futures positioning by asset managers are only at average levels and well off their historical highs. That’s a lot of potential buying power if and when institutional managers buy into the cyclical bullish revival thesis. 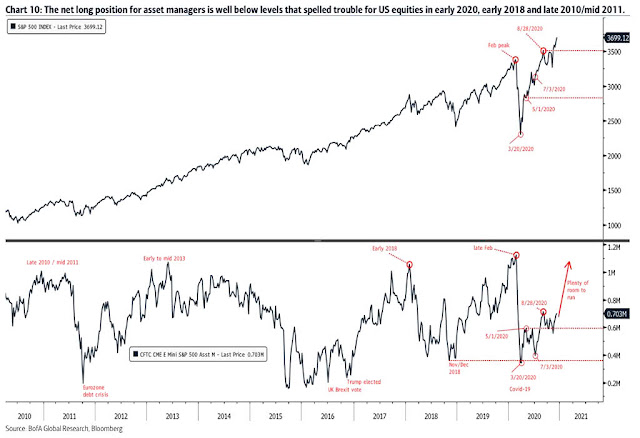 One of the characteristics of the current rotation is US relative equity market weakness, and the emergence of EM stocks as the new leadership. 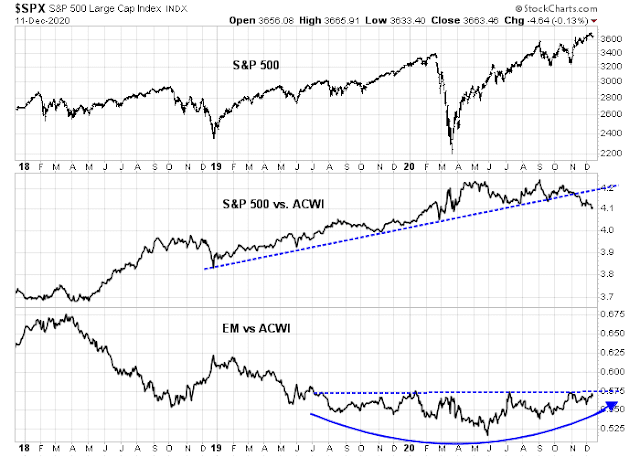 The rotation is just getting started. While EM equity and bond fund flows are starting to turn positive, they are still negative on a YTD basis.

The risk-on stampede has much more room to run.

If the market is undergoing a FOMO melt-up, market internals indicates that the rally is nowhere near its peak. The breadth and momentum of the current advance are consistent with past instances of strong advances.
We can glean some clues from past market history. I have been monitoring the % of S&P 500 stocks above their 200-day moving average (dma). Readings above 80 have either resolved with sharp corrections (pink) or sustained advances (grey). In the past, only readings above 90 have seen the market continue to rise. Moreover, rallies normally don’t end until the 14-week RSI reaches a 70 overbought level. The market isn’t there yet – it still has room to run. 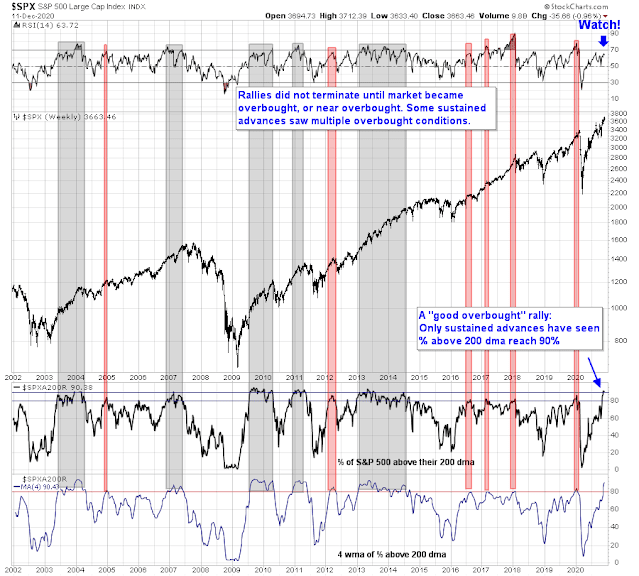 As well, FOMO melt-ups generally don’t end until low-quality stocks start to shine. An analysis of the quality factor shows that high-quality stocks are still leading the current rally. (For the uninitiated, S&P has a much strictly profitability criteria for index inclusion than the Russell indices, and therefore the S&P 600 to Russell 2000 is a proxy for the small cap quality factor.) In the past, either large-cap or small-cap quality has flashed warning signs of a “junk” stock rally ahead of the actual market peak. That canary in the market coal mine is still healthy. 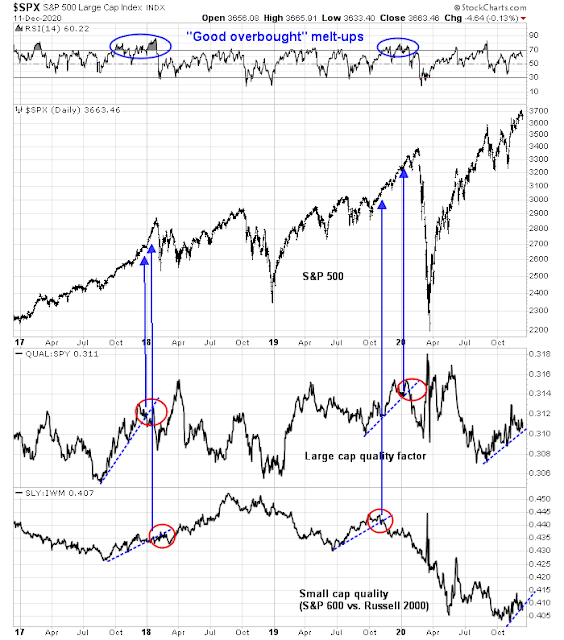 In conclusion, the stars are lining up for another stock market FOMO stampede. If this is indeed a market melt-up, any weakness is likely to be mild. Chances are it has further to run before the rally is finished.
Risk on!

16 thoughts on “Time for another year-end FOMO stampede?”