How far can stocks pull back? – Humble Student of the Markets 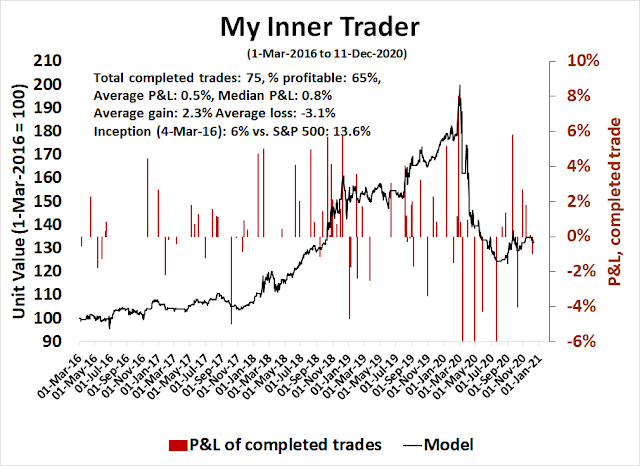 The bulls suffered a setback when the S&P 500 violated a minor rising uptrend (dotted line), though secondary uptrend support (solid line) is holding at 3640. Before anyone panics, the uptrends in the S&P 500 and breadth indicators are intact. In all likelihood, the market is just undergoing a period of consolidation since the start of December. 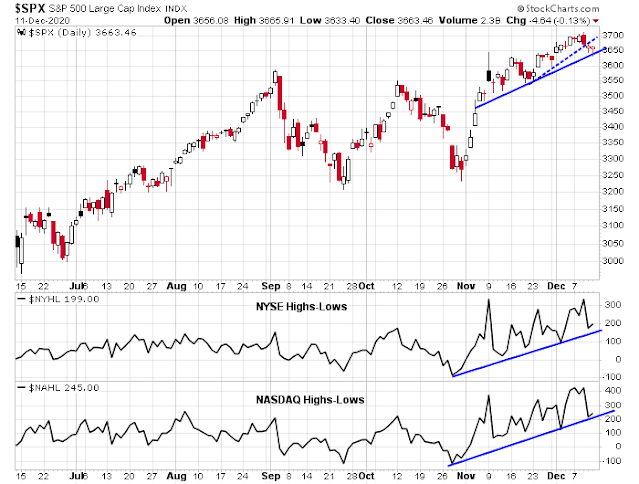 The Swedes call it ketchupeffekt, or the ketchup effect. It’s what happens when you try to pour ketchup on food. Nothing happens for a long time, then it all happens at once. The market weakness of last week is a display of ketchupeffekt. Suddenly, all the bad news is happening at once. If this is indeed the start of a pullback, how bad can it get?
Let’s explore the downside scenarios.

There are a number of catalysts for further market weakness. First and foremost is a possible disappointment out of Washington. Lawmakers are deadlocked on the details of a CARES Act 2.0 stimulus bill. The Washington Post reported that Mitch McConnell had no support from Republicans for the bipartisan compromise negotiated by a group of Republican and Democrat senators.

Staffers for Senate Majority Leader Mitch McConnell (R-Ky.) also told leadership offices in both parties Wednesday night that McConnell sees no possible path for a bipartisan group of lawmakers to reach an agreement on two contentious provisions that would be broadly acceptable to Senate Republicans, according to a senior Democrat familiar with the negotiations.

Investors may also want to brace for a possible disappointment from the Fed’s December FOMC meeting on Wednesday. Expectations are rising that the Fed will ease further by shifting their buying to longer term maturities in the Treasury market, otherwise known as yield curve control (YCC). Fed watcher Tim Duy thinks that the Fed fumbled its communication strategy and YCC is not in the cards.

The Fed kind of screwed up the communications with all the emphasis on downside risk. They didn’t spend enough time explaining that the downside risk was very short-term and they really couldn’t do anything about it. They didn’t spend enough time saying that their tools are still powerful in response to a tightening of financial conditions but the economy fell into a deep hole and they can’t do much beyond create accommodative financial conditions that allow the economy to heal but that healing takes time. They have spent time explaining the importance of fiscal policy in the near term but haven’t until last week explained they couldn’t compensate for a lack of that policy because monetary policy works with a lag and by the time it kicks in we will be on the other side of the surge. That said, last month Clarida was very clear that financial conditions were accommodative and that more wasn’t necessary. I don’t know that anyone was paying attention.

It seems to me that the Fed is telling us they are going after the low-hanging fruit of putting some guidance on the asset purchase program at this next meeting. The Fed did discuss in November potential changes such as the duration mix or the size of asset purchase but this discussion regarded policy beyond the current surge of Covid-19 cases. With financial conditions currently easy and the Fed literally unable to impact near-term economic outcomes, there doesn’t seem any reason to change policy next week. Of course, an unexpected tightening of financial conditions would be something that the Fed could address should that occur between now and the meeting.

The stock market has been boosted by a flood of central bank liquidity. Disappointment over expectations of further easing measures could be a catalyst for a risk-off setback. 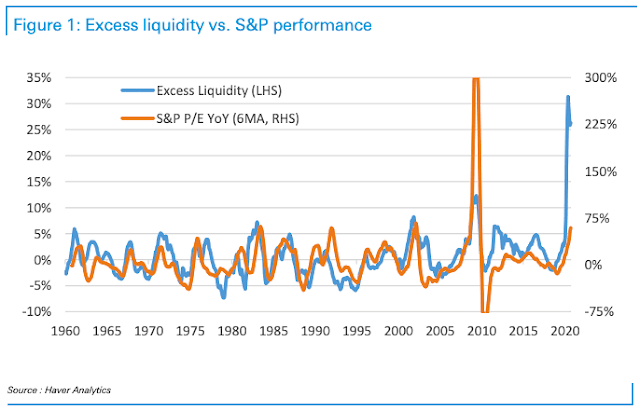 Another possible source of risk appetite volatility are the Brexit negotiations. Even though the “final deadline” for negotiations is supposedly Sunday, the absolute “drop-dead” deadline is December 31, which is the date new arrangements and a new relationship between the UK and the EU will come to force assuming there is no extension or a deal has been struck. So far, indicators of Brexit anxiety, as measured by the relative performance of the FTSE 250 to FTSE 100 and the GBP exchange rate, are showing heightened signs of concern, but no panic yet. 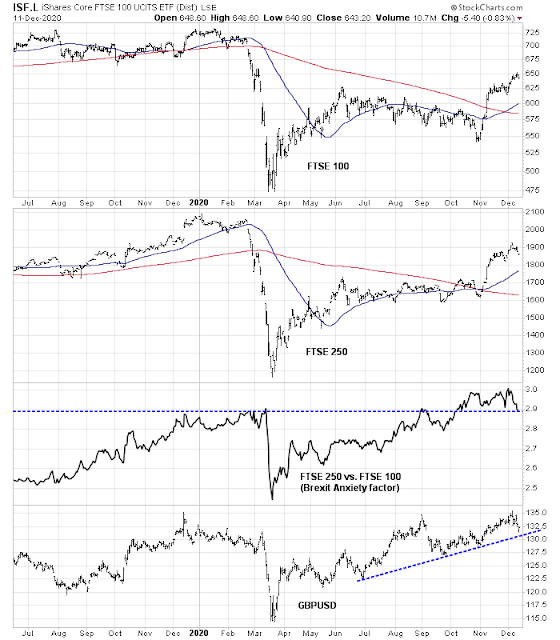 The prospect of a no-deal disorderly Brexit could spark a global risk-off episode.

The widespread concerns raised by technicians over the extended nature of investor sentiment is a concern for the bulls. The cover of Money Week in the UK is an example of a contrarian magazine cover warning. 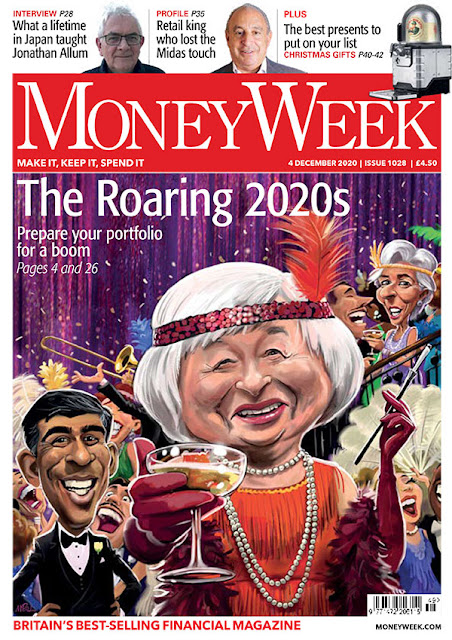 However, this chart from Callum Thomas shows that bullish sentiment surges are not unusual during bull phases of the market (annotations are mine). 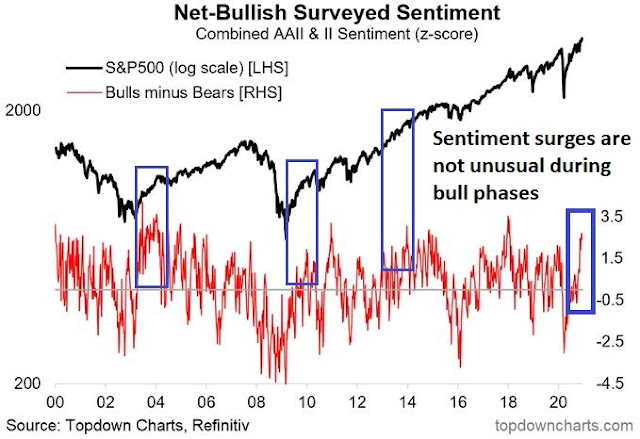 As well, bearish warnings from sentiment models are offset by strong bullish momentum conditions. Here is a big picture perspective. Urban Carmel pointed out that the McClellan NYSE Summation Index (NYSI) recently spiked over 1000. “The last time it closed >1000 was early June; [and the S&P 500] promptly lost 8%.” While past episodes have tended to be long-term bullish, about two-thirds of the occasions have resolved themselves with either corrections or sideways consolidations (pink boxes). A closer examination of the correction and consolidation episodes saw the market on average top out roughly a month after the initial signal of a NYSI close above 1000. 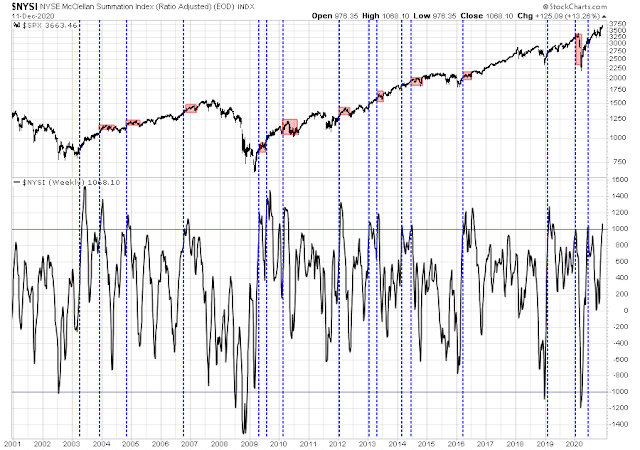 I have also been monitoring the recent surge in correlations between the S&P 500 with the VIX Index, and the VVIX, or the volatility of the VIX. We have seen 14 similar warnings in the past three years. Eight episodes were resolved in a bearish way (red vertical lines), and six saw the market either consolidate sideways or continue to rise (blue lines). On the occasions when the market has pulled, back the average drawdown from the initial date of the signal was -4.9%. 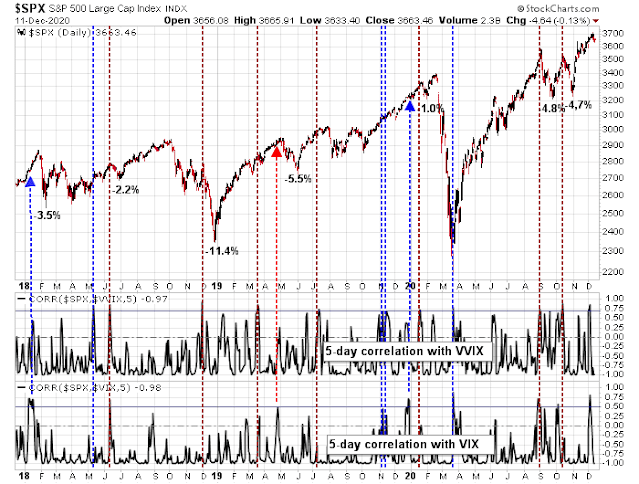 I would add that while this analysis is tilted towards the bear case, the object of the exercise is to estimate downside risk. The bull case has been made elsewhere (see Time for another year-end FOMO stampede?). On average, the prospect of a 5% drawdown is all the ketchup effect can muster for the bears, Several investment banks have called for a short-term pullback, and if too many traders are waiting to buy the dip, any corrective action should be shallow. Arguably, this is the dip that you should be buying into. Analysis from LPL Research shows that positive December seasonality doesn’t start until the last half of the month.

In conclusion, the intermediate and long-term outlook for stock prices is up, but there is a possibility that the market could see some short term weakness. Should the S&P 500 break uptrend support at 3640, the estimated average downside risk is about -5%, or 3484.
Short-term risk levels are rising. While traders may wish to trim their long positions at these levels, investment oriented accounts should take advantage of any market weakness and buy the dips. In particular, the FOMC meeting on Wednesday is a source of possible volatility that traders should be aware of.

17 thoughts on “How far can stocks pull back?”