The bearish window is closing quickly – Humble Student of the Markets

Mid-week market update: I highlighted this chart as a possible warning on the weekend (see Melt-up, or meltdown?). In the past, high levels of correlation between the S&P 500 and VVIX, the volatility of the VIX, has generally led to market stalls. In addition, high correlations between the S&P 500 and the VIX Index has also been warnings of market tops. We have seen 14 similar warnings in the past three years. nine episodes were resolved in a bearish way (red vertical lines), and five saw the market either consolidate sideways or continue to rise (blue lines). 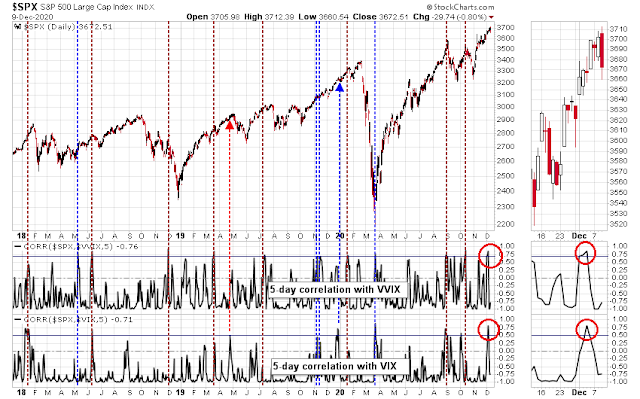 The bulls are on the verge of dodging a bullet. All of the bearish instances saw the market decline soon after the signal. It has been a week since correlations spiked on December 2, 2020. While the S&P 500 is testing rising trend line support as NYSE net highs surged, there is no sign of a downside break. Moreover, NYSE breadth, as measured by advances-declines, was surprisingly positive even as the S&P 500 fell -0.8% on the day. 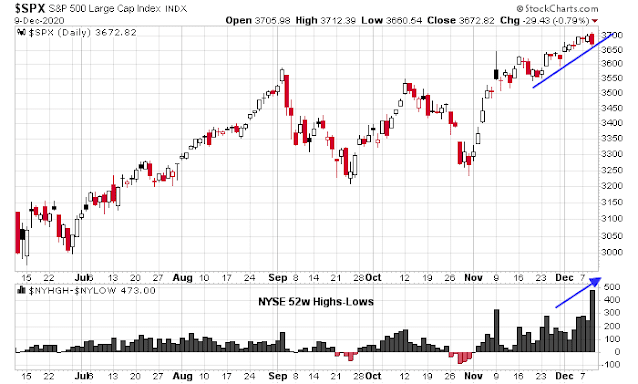 Tactically, the bearish window is closing very quickly. Today’s decline may be the bears’ last chance.

I think everyone is aware of the warnings from the sentiment models. Technical analysts have to be blind not to see the signs of excessive bullishness, which is contrarian bearish.
The latest short interest report tells a story of capitulation by the bears. Shorts are disappearing. While this is an immediate cause for alarm, but it will not put a floor on stock prices if the market hits an air pocket. 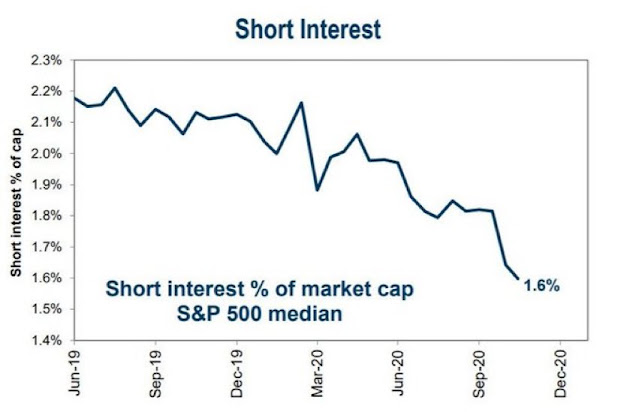 This week’s Investors Intelligence sentiment remains mostly unchanged. Both the %Bulls and the bull-bear spread are stretched, and they remain at the levels last reached at the melt-up top of early 2018. 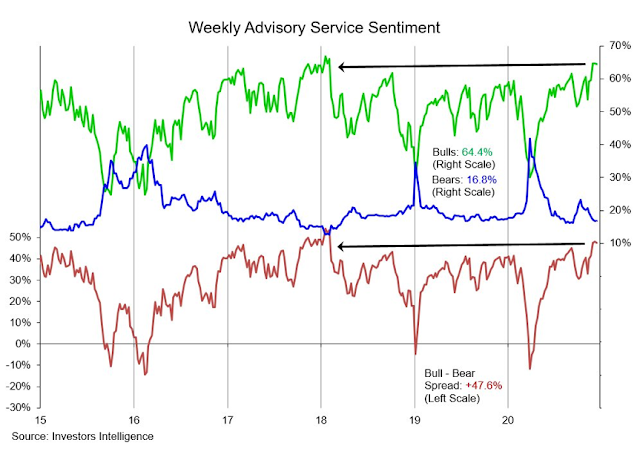 SentimenTrader recently highlighted the record level of call option buying by small traders as a sign of frothiness. 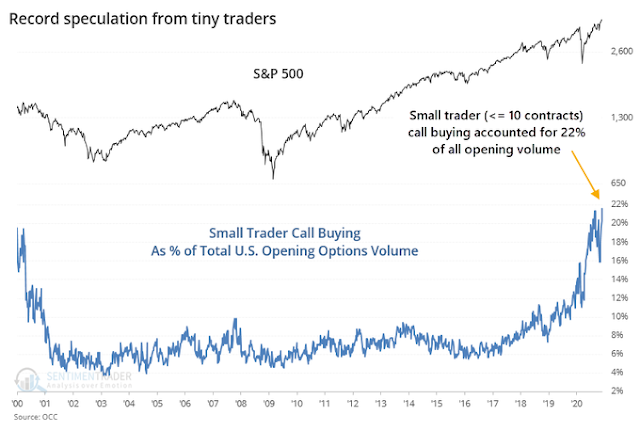 Macro Charts also pointed out that call/put volume ratio is at levels that have signaled market stalls during the post NASDAQ top period. However, he held out the possibility that the market is undergoing a regime shift when this ratio rose steadily during the late 1990’s. 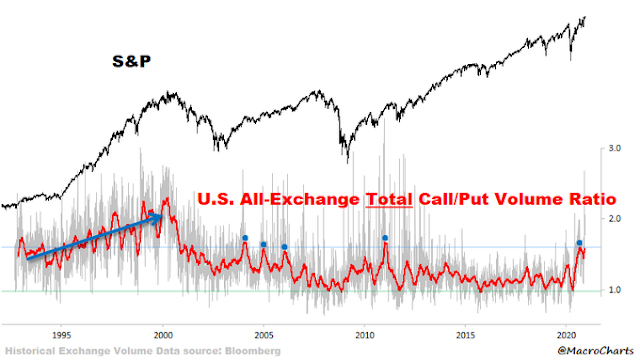 Notwithstanding the warnings from sentiment models, market internals is strong and they are confirming the new market highs.
Equity risk appetite, as measured by the equal-weighted consumer discretionary sector, which minimizes the effects of Amazon and Tesla, and the ratio of high beta to low volatility stocks, is confirming the market’s advance.

Foreign exchange markets behavior is also supportive of the equity market advance. The USD is weakening, which is equity bullish. As well, the AUDJPY cross, which is a sensitive barometer of FX market risk appetite, is rising.

What could derail this rally?

The bulls have gained control of the tape, but what are the potential potholes in the road?
The most obvious hurdle is the impasse in Congress over a stimulus bill. The news out of Washington is both hopeful and sobering. It is unclear whether both sides can come to an agreement. Even if they do, it is unclear whether President Trump would sign such a bill should it reach his desk. The market has staged minor rallies on positive news, but the magnitude of the reaction has not been large. I interpret this as expectations are not set overly high. Should negotiations fail, any market disappointment is likely to be minor.
The Georgia Senate election in early January could be a bullish or bearish catalyst for the market. If the Democrats win both seats, they would control the Senate and set the agenda for the first two years of the Biden Presidency. It would also open the door to the passage of a massive fiscal stimulus, which would be interpreted as risk-friendly. A Republican win, which is the most likely case, would see divided government and the imposition of fiscal brakes on spending and growth.
The market is approaching the election and mostly shrugging off the risks. SPY implied option volatility is sloping up into the election, but readings are not exhibiting high levels of anxiety. 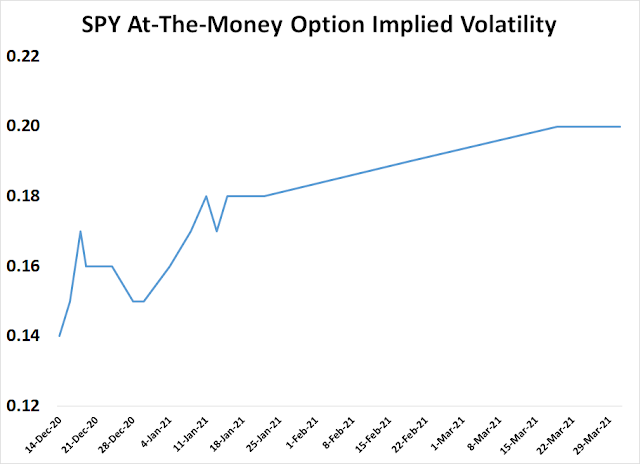 Current conditions indicate that the market is relatively relaxed about the Georgia Senate races. Compare the current conditions to the evolution in implied volatility heading into November Presidential Election. 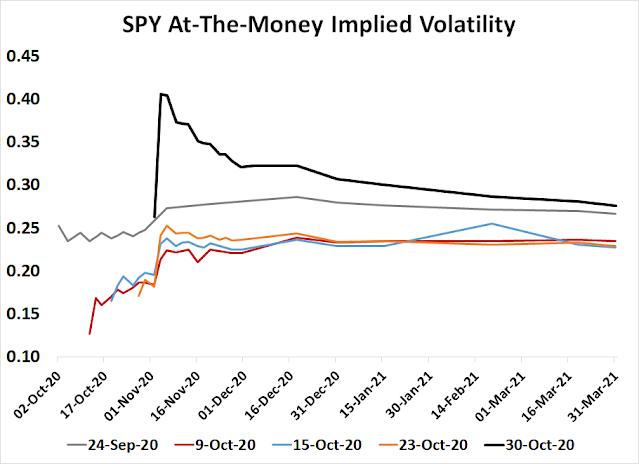 Joe Wiesenthal at Bloomberg summarized the market’s mood this way when he addressed the lack of negative reaction to last Friday’s disappointing November Jobs Report:

So what gives? You can’t read the market’s mind, but one plausible explanation is that investors basically accept that it’s going to be a rough winter no matter what, with a substantial slowdown in economic activity as we wait for the masses to get the vaccine. But investors don’t think that any substantial slowdown over the next few months will really become a self-reinforcing recession. A slowdown, yes, but not one that spirals out of control. And then when the vaccine comes, it’s assumed we’ll have a brisk recovery. The other wildcard here is that stimulus negotiations started looking brighter at the end of last week, and it may be that the deceleration in the labor market, just as millions of people are staring down a loss of benefits, make it more likely Congressional leaders agree to a deal.
So you have a market that doesn’t see a winter downturn becoming self-reinforcing + the possibility of a stimulus, pushing bond yields higher. In other words, the market is still basically pricing in two outcomes next year: Good (just a vaccine) and better (a vaccine + stimulus). The bad outcome (a true double dip, where activity spirals lower) is not a market concern right now. That doesn’t mean it can’t happen, but investors aren’t concerned about it, and Friday’s Non-Farm Payrolls miss wasn’t bad enough to really make it a worry.

In conclusion, the bears have a dying chance to seize control of the tape. Frothy sentiment is a concern, but excessive bullishness has not proven to be a timely and actionable sell indicator. My inner trader is siding with the bulls, and so has my inner investor.
Disclosure: Long SPXL

10 thoughts on “The bearish window is closing quickly”