Melt-up, or meltdown? – Humble Student of the Markets 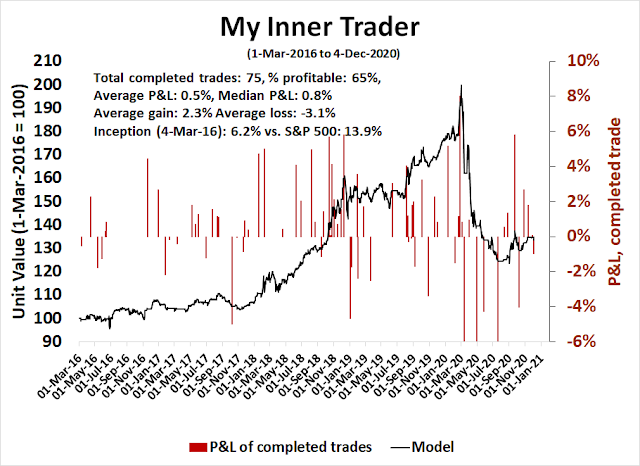 The S&P 500 closed November above its upper monthly Bollinger Band. This is a rare occurrence and going back to 1990, there were 14 occurrences. Exactly half of the episodes saw the market continue to rise, and the other half fell. 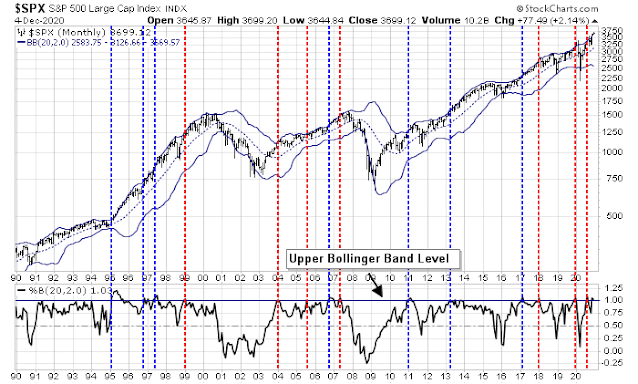 On the other hand, momentum is extremely strong after the S&P 500 gained 10.8% in November. Are these overbought conditions the signs of a melt-up, or the warnings of an imminent pullback?

SentimenTrader observed that for the first time in 15 years, 60% of its sentiment indicators are exhibiting excessive optimism – which is a record. 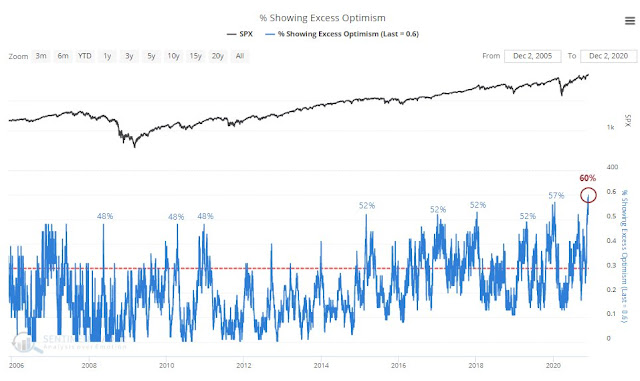 However, sentiment indicators come with an important caveat. They work better at pinpointing bottoms than at calling tops. That’s because investors panic at bottoms, which are easy to spot. On the other hand, investors become complacent at market tops but need a bearish catalyst for the market to fall. 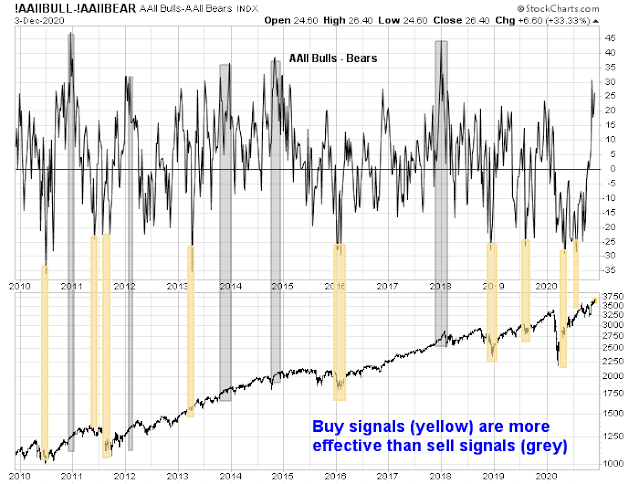 In the meantime, the S&P 500 is roaring ahead after a 10.8% gain in November. Ryan Detrick of LPL Financial found that price momentum tends to persist after 10% monthly gains if you look ahead 6 and 12 months. Results for the next month, which in this case is December, show a positive average and median gain, but the success rate is a coin flip at 50%. 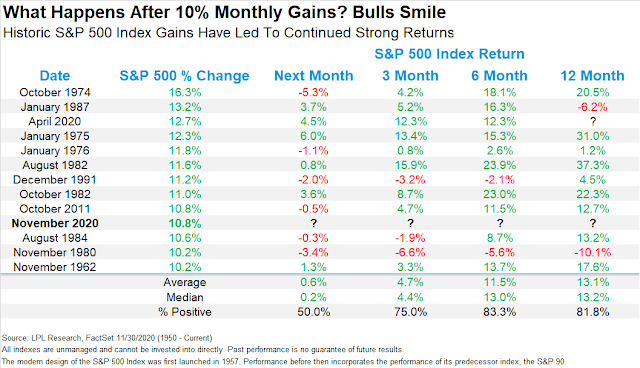 SentimenTrader also observed that NAAIM active managers are so bullish they’re levered long. However, the “average return 3 months later was 5%, with the 3 precedents all being higher”. The moral of this story: don’t discount the effects of price momentum.

I have been monitoring the % of S&P 500 stocks above their 200-day moving averages. Readings have spiked above 80% to over 90%. Past episodes of surges above 80% have been divided into sustained advances (in grey) and pullbacks (in pink). However, only readings above 90% have been signals of “good overbought” rallies. These conditions argue for a market melt-up despite warnings from sentiment models. 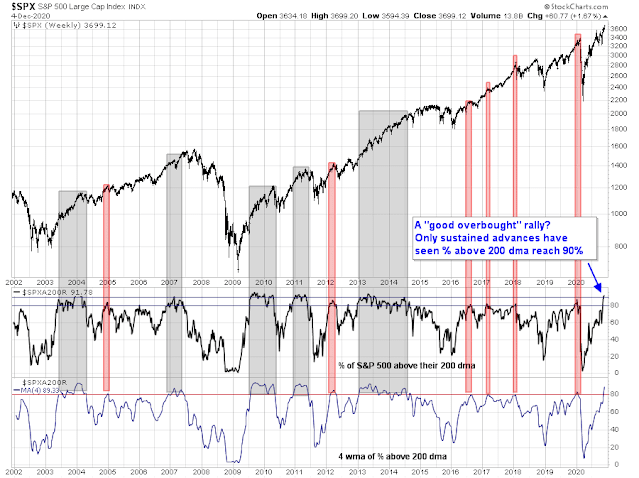 Here is an odd but bullish anomalous sign from sentiment models. Macro Charts observed that traders are selling aggressively, and the “5-Week positioning change is one of the most negative in history – previously only seen at bottoms”. 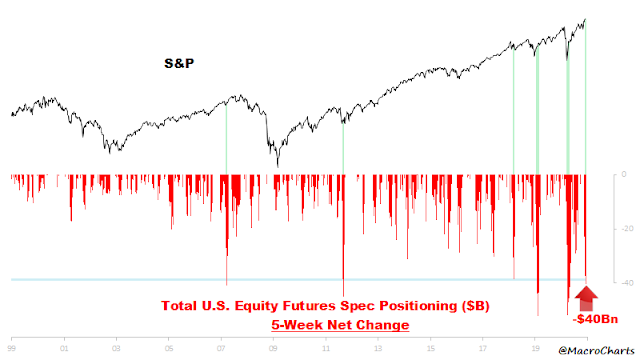 These readings are unusual because hedge fund equity futures trading is mainly dominated by Commodity Trader Advisers (CTAs). CTAs are trend followers, and they should be buying, not selling, as prices have been rising. The most likely explanation of significant large speculator selling can be attributable to rebalancing flows by institutions. Equities have outperformed bonds so much in Q4 that large balanced funds need to sell stocks and buy bonds in order to return to their target weights. If the stock market is holding up well in the face of concerted rebalancing selling, then the underlying momentum is stronger than appears.
That’s a bullish sign.

Troy Bombardia resolved the bull and bear debate this way.

Something truly rare is happening in financial markets right now. Both sentiment and breadth figures are at multi-year highs (if not multi-decade highs). When this happens, investors and traders split into 2 camps: those who think that stocks will crash (sentiment camp), and those who think that this is only the start of a great bull market (breadth & breakout camp).
Things are never so black and white. The 2 narratives can co-exist if we consider 2 different time frames.
While unimaginably high sentiment can and usually does lead to short term losses and market volatility, incredibly strong breadth is more of a long term bullish sign for stocks.

This year has been extremely unusual in the markets. An anecdotal report from Goldman’s prime brokerage desk revealed that hedge funds approached the November election cautiously and they were underweight equity beta. As a consequence, “both fundamental and systematic L/S equity funds gave up nearly half of their YTD alpha (over MSCI) in November, one of the worst months for alpha performance in 5 years.”
This is a classic setup for a market melt-up. With the December quarter-end and year-end approaching, which is a deadline on which the quarterly and annual 20% incentive fees are calculated, there is a temptation for hedge fund traders to engage in a beta chase for better returns. It is noteworthy that the stock market’s reaction to Friday’s big miss in the November Jobs Report was to rise. A market’s ability to shrug off bad news is bullish. This is also an indication of the strength of price momentum.
Callum Thomas of Topdown Charts pointed out that that value-growth seasonality is tilted towards value in December and January. In light of the Great Rotation into value and small-cap stocks, a hedge fund beat chase is likely to benefit these groups should the market melt-up. 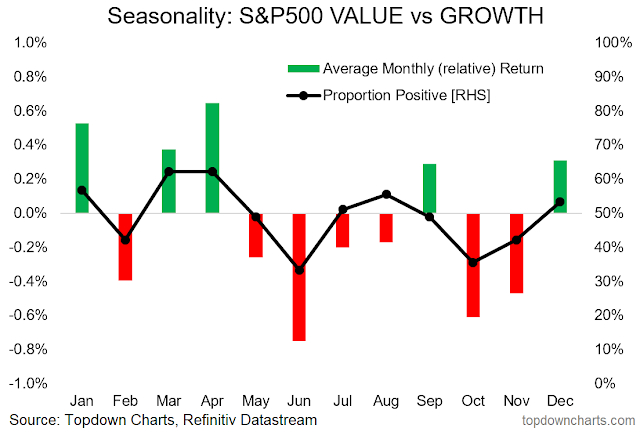 The top-down macro perspective is also supportive of a risk-on environment. Manufacturing PMIs and ISM manufacturing data are all pointing to a global rebound. Historically, such conditions have sparked a fund flows stampede into equities. 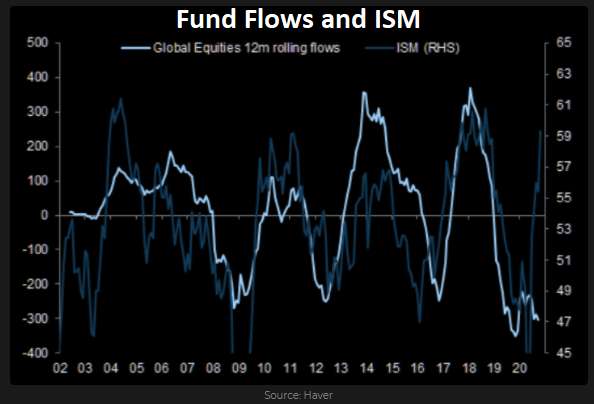 To be sure, some short-term warnings are appearing. The 5-day correlation between the S&P 500 and VVIX, the volatility of VIX, has spiked to over 70%. Past episodes have seen the market stall but pullbacks have tended to be relatively shallow. 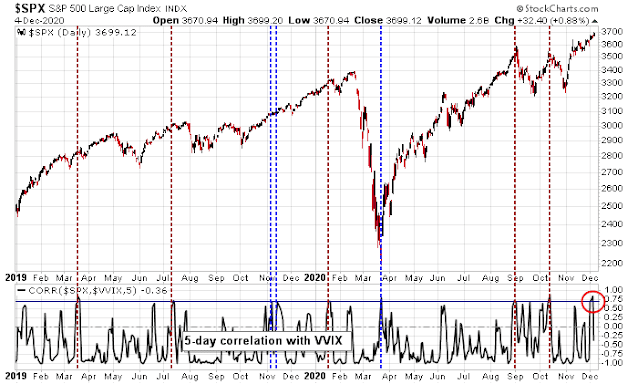 In this environment, investors should be buying dips as the downside risk should be relatively limited.

How long can the melt-up last?

Under a melt-up scenario, how long can the rally last? I have two ways of estimating the length of an advance.
Macro Charts pointed out that corporate insider selling has risen to levels not seen in four years. However, insiders tend to be early in their trades, and the market usually doesn’t top out for several weeks or months after a spike in selling. Based on this data, pencil in a top during the January to February time frame. 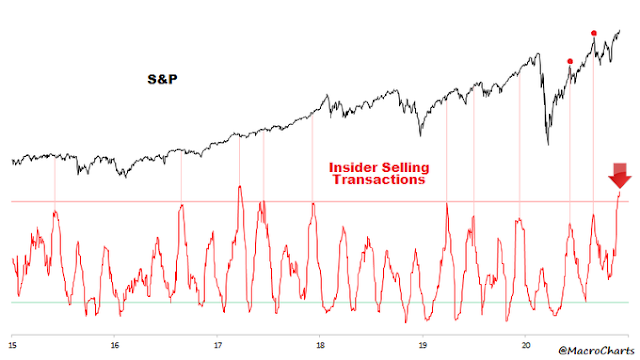 As well, a reader alerted me to an analysis featuring the 56-week pattern.

Here is how it works: any time the S&P 500 index (SPX) rises more than five percent within a 20-session stretch, 56-weeks later there is often a sell-off of varying proportions. This happens consistently enough that if you track through the data, you can calculate that the average return for the 40-day period at the end of 56 weeks is almost a full one percent lower than the average return for any other 40-day period over the past 26 years. The reason for bringing it up now is that, as shown in the chart below, the recent pullback came at the beginning of such a pattern. Even more interesting is that three more ending patterns are due to create selling in close proximity during the second quarter of 2021.
The 56-week pattern has a simple explanation. To take advantage of favorable tax treatment, many high-net worth investors and professional money managers prefer to hold positions longer than one year. What that means is that if a lot of them buy at the same time, it shows up in the market averages. A little more than a year later, there comes a point where a lot of money is ready to be taken out of one position and moved into another. 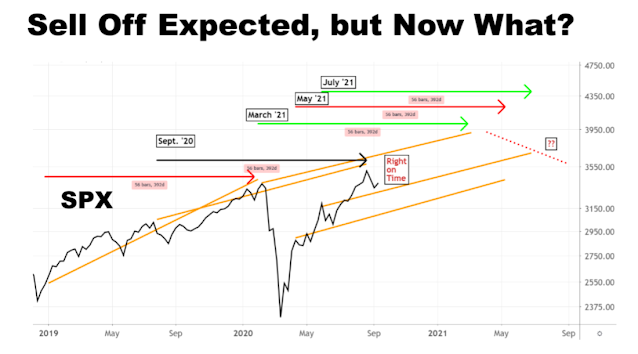 The 56-week pattern puts the timing of a significant downdraft in the March to July period. Based on this framework, we should also see some market weakness starting around mid-December 2021.
In conclusion, the weight of the evidence is supportive of the melt-up scenario. Any market weakness should be relatively shallow. You should take advantage of dips to add to long positions. The timing of a melt-up market top is less clear, but start to be cautious by late January, but the ultimate top may not arrive until February or March.
Disclosure: Long SPXL