A focus on gold and oil – Humble Student of the Markets

I received considerable feedback from last week’s publication (see How to outperform by 50-250% over 2-3 years), mostly related to gold and energy stocks. 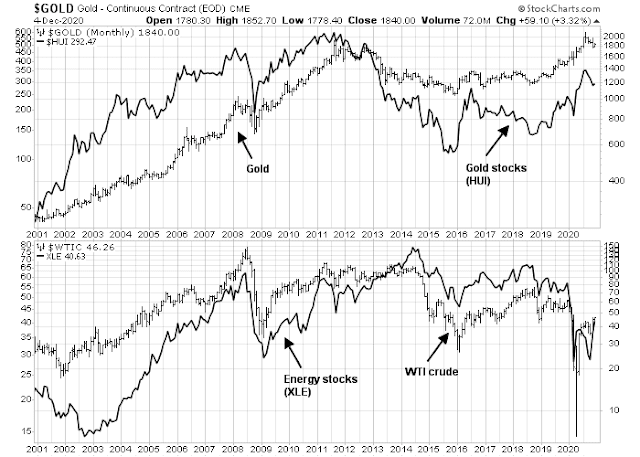 In last week’s analysis, I had lumped these groups in with other cyclicals. Examining them further, I conclude that both gold and energy stocks have bright futures over the next 2–3 years. I estimate that gold prices could beat US large-cap growth stocks by about 100% over this period, and I would favor bullion over gold stocks. The upside target for energy stocks is a little bit tricky owing to their declining fundamentals and falling demand from ESG investing. The upside relative performance target is wider at 25–300% for this sector.

Both gold and oil are major commodities, and we may be seeing the start of a new commodity bull and supercycle for the next 10 years.

Commodity prices are very washed-out relative to stock prices. There is little or no institutional memory of what to do if inflation heats up. The last secular commodity bull began in the 1970’s, and there are hardly any portfolio managers working today who remember that era, and how to respond and position portfolios. 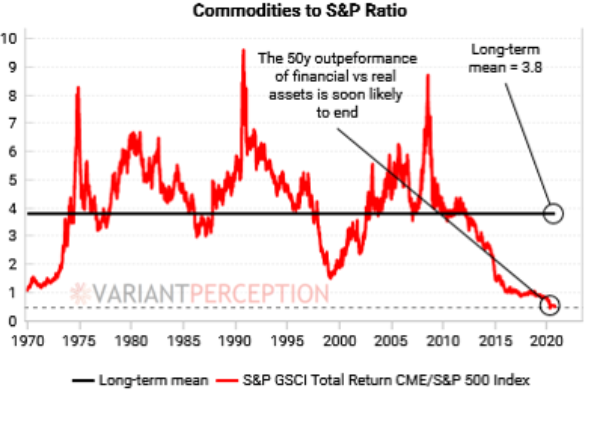 Mark Hulbert recently argued that the next decade could represent a period of mean reversion in asset returns.

Here’s why investors should expect below-average returns over the next decade: the historical data exhibit a strong reversal tendency. To show this, I calculated a statistic known as the correlation coefficient, which would be 1.0 if the best trailing decade returns were correlated with the best subsequent decade returns, and so on down the line. The coefficient would have been minus 1.0 if the best trailing returns were correlated with the worst subsequent returns, and so on, while a coefficient of zero would mean there is no detectable relationship between the two.

When focusing on all months since 1881 in Shiller’s database, I calculated this coefficient to be minus 0.35, which is strongly significant at the 95% confidence level that statisticians often use when assessing whether a pattern is genuine. 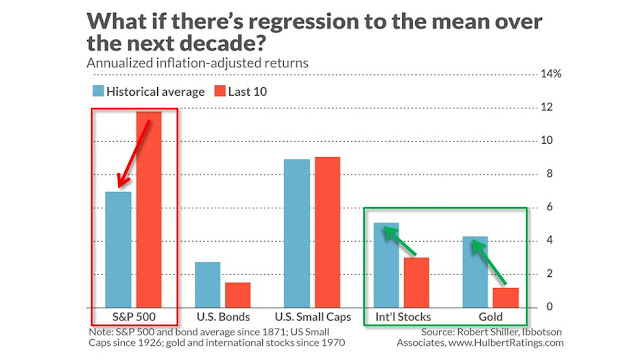 At a minimum, it would be no surprise to see commodity prices rise as the global economic recovery gains strength as the COVID pandemic fades. 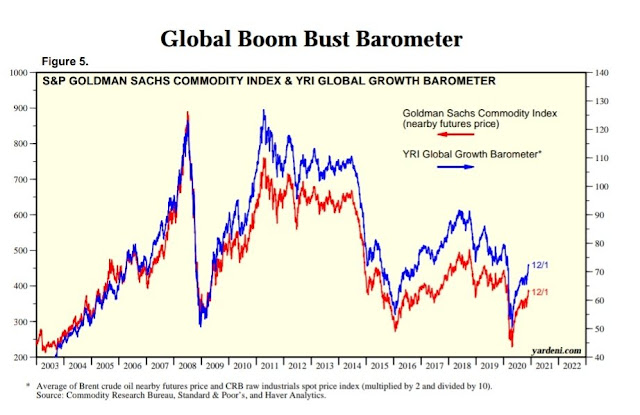 China has been a voracious consumer of commodities and the locomotive of global growth. Its November Caixin PMI, which measures the activity of smaller firms, has roared ahead to a decade high. This is supportive of a surge in commodity demand from the Middle Kingdom. 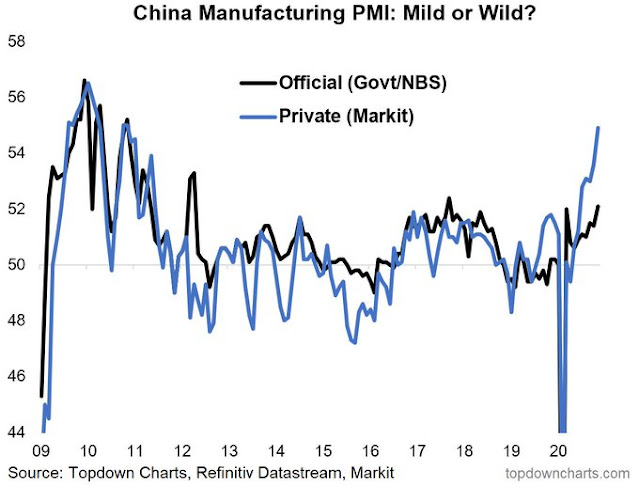 Gold: Inflation hedge
That brings us to the story of gold, which is traditionally viewed as an inflation hedge. Today, a combination of easy central bank policy determined to raise inflation and easy to neutral fiscal policy is likely to ignite a round of asset price inflation. 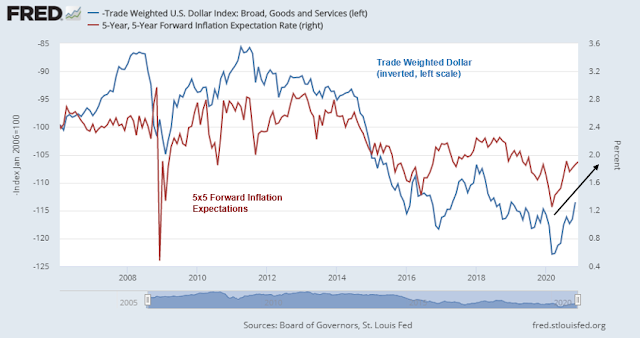 I expect that commodity prices will outpace the S&P 500 in the next few years. The chart below depicts gold prices, the CRB Index, and the ratios of the S&P 500 to gold and to the CRB. In particular, the S&P 500 to gold ratio is an especially sensitive barometer of commodity price strength. The bottom panel shows that we are undergoing a period of falling S&P 500/gold, which is reminiscent of the mid-1990’s and the post-GFC period when the economy was in expansion and commodities outperformed stocks. 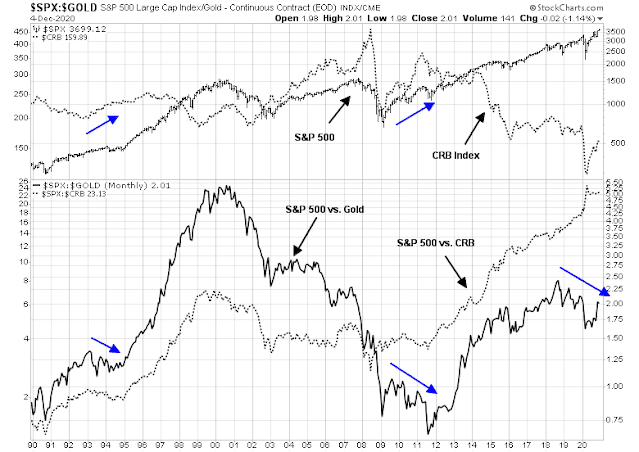 Asset managers are catching on to this new commodity reflation trend. The BoA Global Fund Manager Survey shows fund manager weights in commodities began rising just as the S&P 500 to gold ratio started falling. Commodity weights are not excessive, and they have more room to run should inflationary and growth expectations rise further. 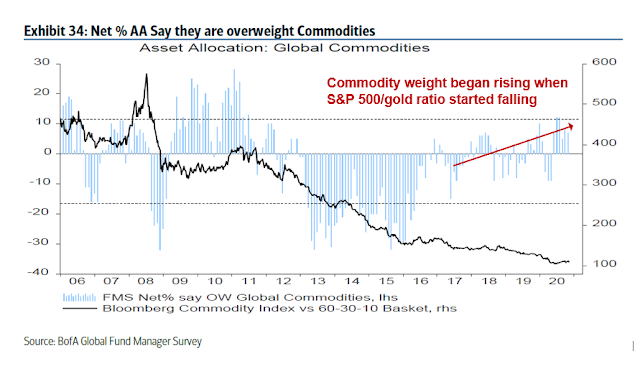 From a technical perspective, gold prices staged an upside breakout from a multi-year base. They retreated below the breakout as a test. One hint of bullish strength comes from inflationary expectations, which broke out of a declining trend line. 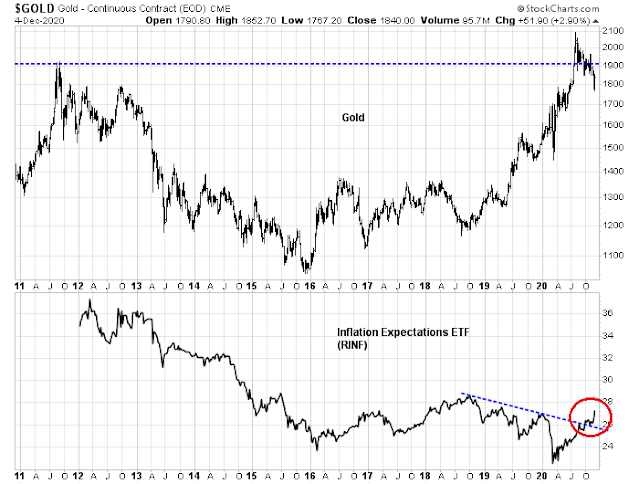 Moreover, gold sentiment has fallen to bearish extremes to levels last seen when gold was $1200/oz. 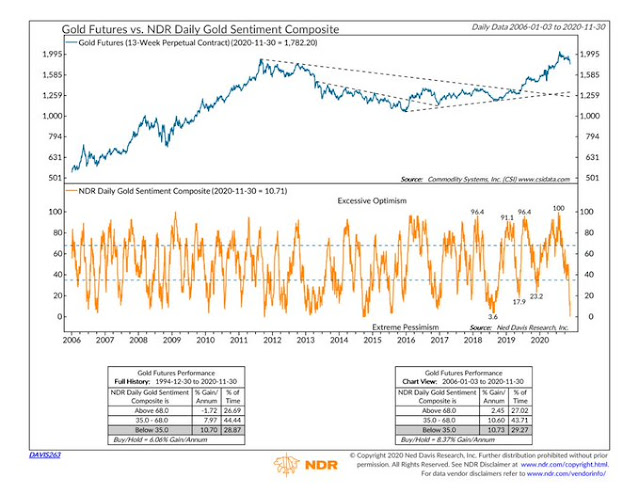 That said, I would favor a direct investment in gold bullion instead of gold stocks. Large and small-cap gold stocks have performed roughly in line with their capitalization benchmarks (top panel). The gold stock to gold ratio (bottom panel) staged an upside breakout in April and remains above the breakout level. Gold stocks are not especially cheap on an historical basis relative to the underlying commodity. As well, small-cap golds are outperforming large-cap golds (middle panel), indicating a heightened level of speculative fever in the sector. 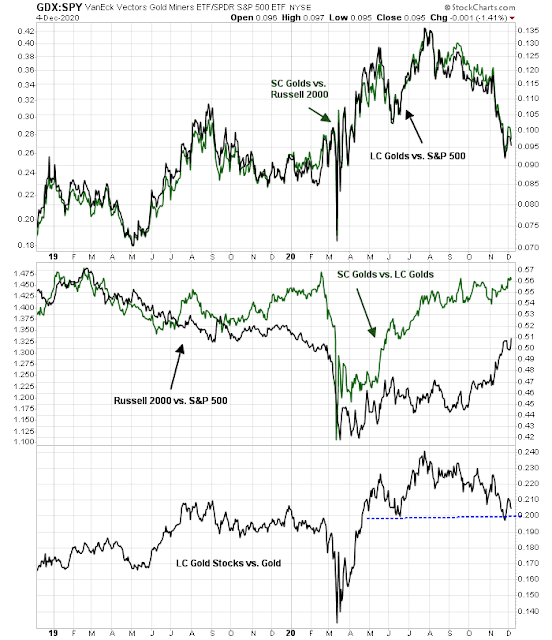 An important caveat for Canadian investors

I would like to add an important caveat for Canadian Dollar denominated investors. Commodities are usually priced in USD, but the CADUSD exchange rate has been highly correlated with commodity prices. While CAD denominated investors should still profit during an era of rising commodities, they will face headwinds if their currency exposure is unhedged.

A similar warning applies to investors residing in other countries with high levels of commodity exports, such as Australia and New Zealand.

Oil and gas: The new tobacco

Turning to the energy sector, the fundamentals look terrible. A recent Bloomberg article blared that Peak Oil is upon us, but it’s a Peak Oil of a different sort. The old Peak Oil thesis relied on dwindling global supply and the inability of producers to meet demand. Today’s Peak Oil is all about falling demand.

British oil giant BP Plc in September made an extraordinary call: Humanity’s thirst for oil may never again return to prior levels. That would make 2019 the high-water mark in oil history.

BP wasn’t the only one sounding an alarm. While none of the prominent forecasters were quite as bearish, predictions for peak oil started popping up everywhere. Even OPEC, the unflappably bullish cartel of major oil exporters, suddenly acknowledged an end in sight—albeit still two decades away. Taken together these forecasts mark an emerging view that this year’s drop in oil demand isn’t just another crash-and-grow event as seen throughout history. Covid-19 has accelerated long-term trends that are transforming where our energy comes from. Some of those changes will be permanent.

In addition, the widespread of ESG investing will reduce demand for energy stocks. The world is going green. Investment in coal, oil, and natural gas is going to be shunned in different degrees. As an example, the Trump administration rushed an auction of drilling rights inside Alaska’s wildlife refuge. But no oil majors are participating in the auction owing to high extraction costs, and no major American banks have expressed interest in financing these transactions. 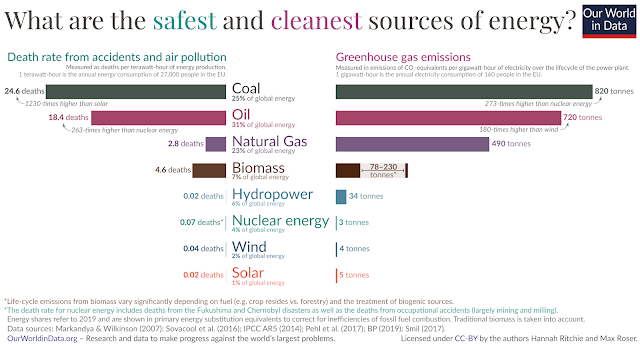 While petroleum products are still useful for transportation because of the internal combustion engine, technological advances in the last 10 years have made solar and wind power highly competitive in many areas for electricity generation. Even the cost of gas peakers, or natural gas power plants that only operate at peak demand hours, have come down. The main hurdle for renewable electricity generation is now battery technology and the cost of storage. 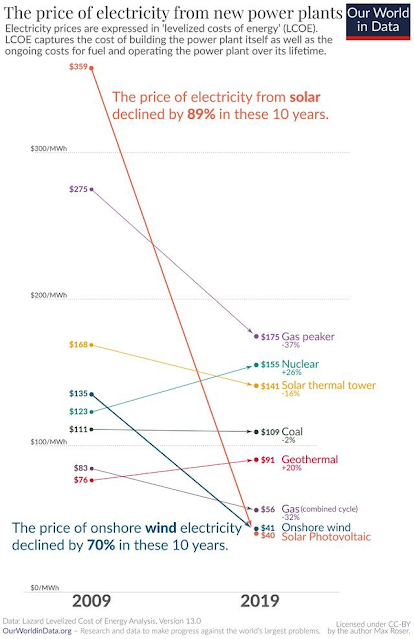 That said, the performance of the energy sector looks washed-out. The energy sector has become the smallest weight in the S&P 500. Exxon Mobil was recently kicked out of the Dow Jones Industrials Average after nearly a century to make way for Salesforce.com. Bloomberg also reported that the company announced a record writedown of its assets.

Exxon Mobil Corp. is about to incur the biggest writedown in its modern history as the giant U.S. oil and gas producer reels from this year’s collapse in energy prices.
Exxon — traditionally far more reluctant to cut the book value of its business than other oil majors — on Monday disclosed it will write down North and South American natural gas fields by $17 billion to $20 billion. That could make it the industry’s steepest impairment since BP Plc’s 2010 Gulf of Mexico oil spill that killed 11 workers and fouled the sea for months. Meanwhile, capital spending will be drastically reduced through 2025.

So what did the stock do after it announced these writedowns? It rose on the day. 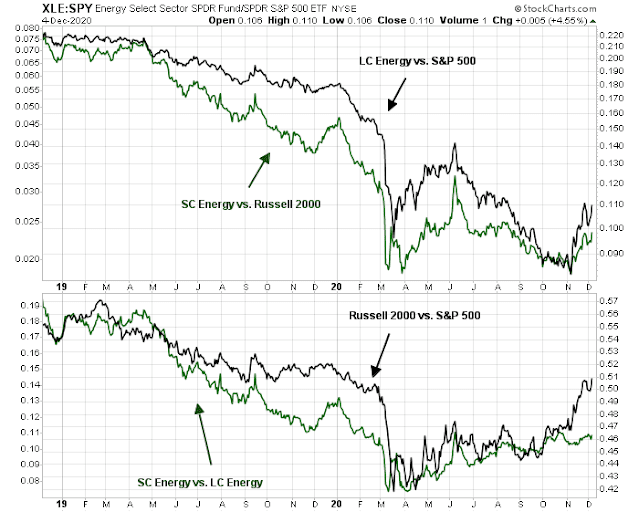 These are the classic signs of a wash-out sector. It is unloved and stops responding to bad news. However, long-term fundamentals present challenges for investors. It is an industry with declining long-term demand and shunned by ESG investors. Energy has become the classic value play, in the manner of tobacco stocks. 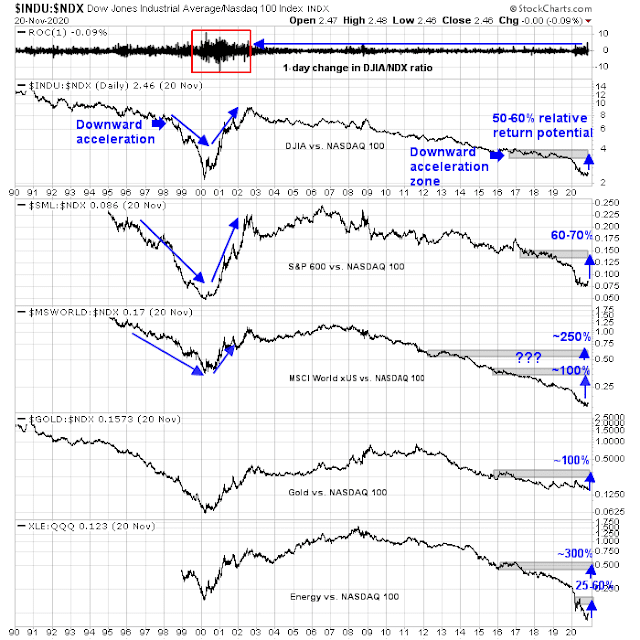 The top panel of daily returns shows a pattern that is consistent with the period following the dot-com bubble top, which suggests that the market is undergoing a similar multi-year turn in leadership.
In the second panel, I went on to estimate upside relative potential by observing the dot-com experience, which saw the DJIA/NASDAQ 100 plunge and mean revert to a level just above the spot when the ratio began to accelerate downward, indicating the start of an investing mania. The magnitude of the current episode of downward acceleration was not as severe; therefore, the snapback should be less than the dot-com era. The dot-com bust performance snapback occurred over a period of 2-3 years, and I would expect the time frame for a similar reversal to be about the same.
Using these techniques, my upside relative return targets for cyclical stocks is 50-60% of outperformance; small-caps 60-70%; non-US stocks had two targets, the first with about 100% of outperformance, and the second of up to 250%; gold bullion about 100%; and two relative performance targets for energy stocks of 25-60% and 300%.
In conclusion, both gold and energy stocks have bright futures over the next 2-3 years. I estimate that gold prices could beat US large-cap growth stocks by about 100% over this period, and I would favor bullion over gold stocks. The upside target for energy stocks is a little bit more tricky owing to their declining fundamentals and falling demand from ESG investing. The upside relative performance target is wider at 25-300% for this sector.

32 thoughts on “A focus on gold and oil”