Mid-week market update: As the S&P 500 pushed to another fresh high, more cracks were appearing in the market internals, indicating that it may be time for the rally to take a pause. Negative divergences, such as the 5-day RSI and a trend of falling NYSE new 52-week highs, are warning signs for the near-term outlook. 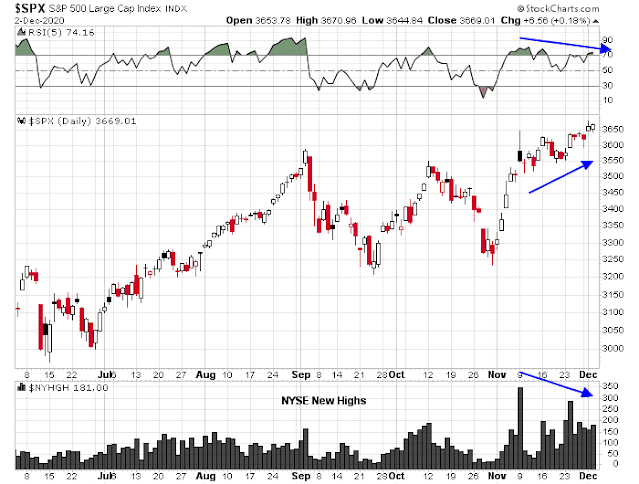 While the intermediate-term trend is still up, the bears have a chance to make a stand here, at least in the short run.

Sentiment indicators continue to exhibit signs of froth. The Investors Intelligence survey shows that both %bulls and the bull-bear spread haven’t seen these levels since the melt-up top of early 2018. 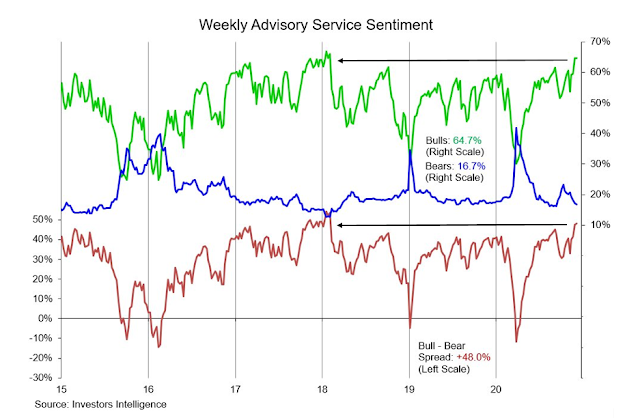 Option sentiment is equally exuberant. The 10 day moving average of the equity put/call ratio has fallen to levels where the market has experienced difficulty advancing in the last year.

As well, call option volumes are still exploding. The Robinhood retail traders don’t seem to have lost their enthusiasm for single-stock call options. 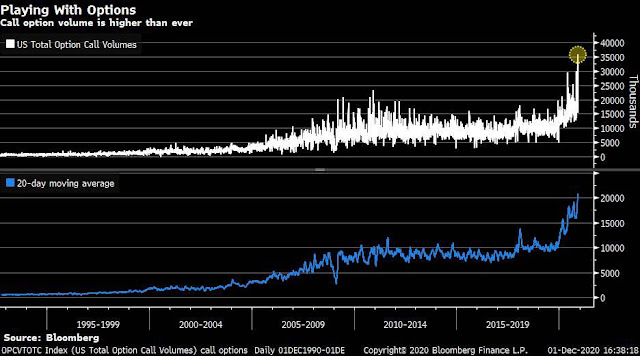 The powder is set. The bears just need an event to light the fuse.

The trigger might be the November Non-Farm Payroll report due Friday morning. An abundance of evidence is appearing that the report is likely to miss in a big way.
The first sign is the ADP private market sector jobs report, which came in at 307K, compared to an expected 410K. However, ADP has shown itself to be a noisy predictor and has experienced wide variations with the actual NFP figure.
The current consensus forecast for November NFP is a gain of 480K jobs. The latest ADP figure  is pointing to a weak but positive NFP print, but there is evidence that we could see an actual negative jobs number. The biggest headwind is a seasonal gain of retail jobs that are unlikely to appear, and won’t be offset by online worker hiring. As well, over 90K in temporary census workers will be lost in government jobs, and state and local employment will continue to come under pressure in the absence of help from the federal government.
High-frequency data from outfits like Homebase, Kronos and UI claims point to negative growth in November employment. 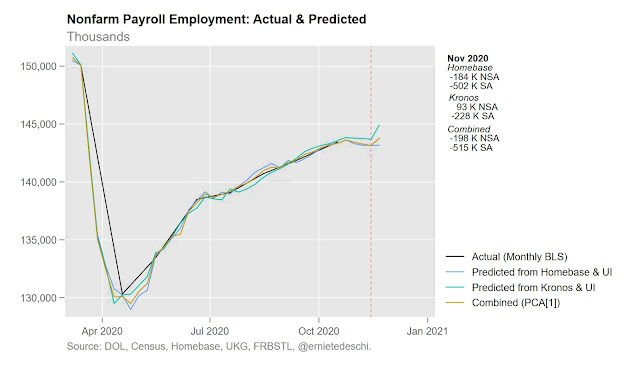 The Census Bureau’s Household Pulse Survey is also calling for a negative NFP print for November. 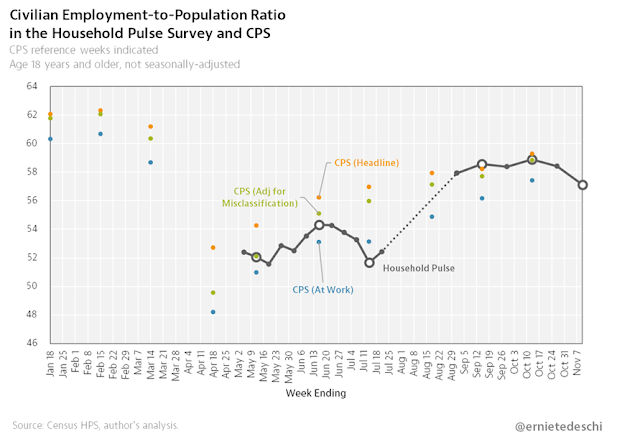 In the absence of a positive catalyst such as another vaccine breakthrough or fiscal stimulus package, my best-case scenario is a weak but positive NFP headline report. There is a significant chance that we could see negative job growth for November, though the gains shown by ADP report has mitigated that risk.
My inner trader has taken a short position in response to weak technical internals, frothy sentiment, and the downside risk to Friday’s NFP report. At a minimum, traders should not be long risk going into the report.
By contrast, my inner investor remains bullishly positioned. The intermediate-term outlook remains bullish, and he would regard any weakness as an opportunity to deploy more cash.
Disclosure: Long SPXU

19 thoughts on “The bears’ chance to make a stand”