Will Powell twist? – Humble Student of the Markets

Jens Nordvig recently conducted an unscientific Twitter poll on the FOMC’s action at the December meeting/ While there was a small plurality leaning towards a “steady as she goes” course, there was a significant minority calling for another Operation Twist, in which the Fed shifts buying from the short end to the medium and long ends of the yield curve. 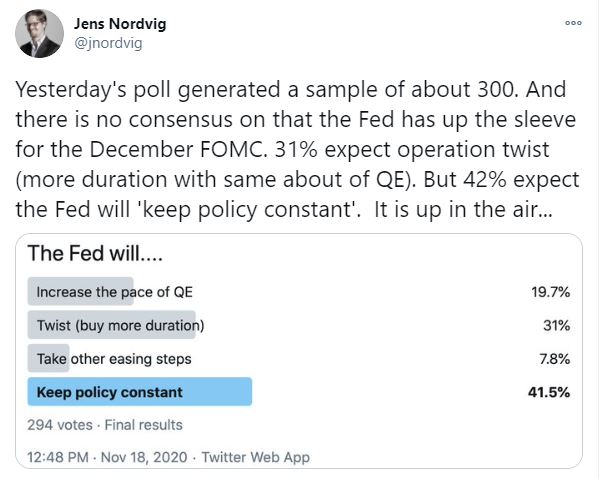 The November FOMC minutes reveal no clear consensus on the prospect of a twist, otherwise known as yield curve control (YCC).

A few participants indicated that asset purchases could also help guard against undesirable upward pressure on longer-term rates that could arise, for example, from higher-than-expected Treasury debt issuance. Several participants noted the possibility that there may be limits to the amount of additional accommodation that could be provided through increases in the Federal Reserve’s asset holdings in light of the low level of longer-term yields, and they expressed concerns that a significant expansion in asset holdings could have unintended consequences.

Here is why that matters.

There are several ways of projecting the 10-year Treasury yield based on cyclical conditions. An analysis of the copper/gold ratio and the base metals/gold ratio indicates a range of 1.4% to 1.8%.

Nordea Markets observed that the cyclical/defensive sector ratio is pointing to a 10-year yield of over 2%. 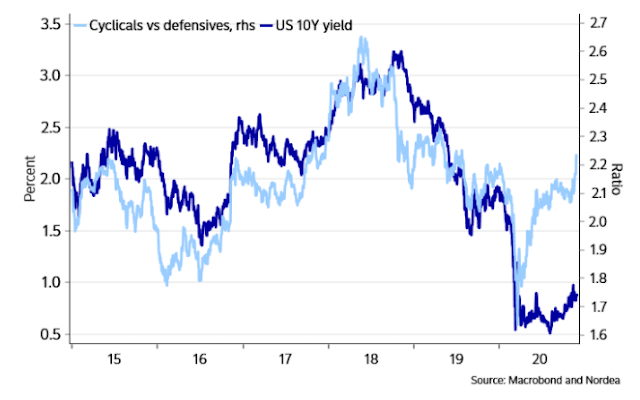 These are all estimates, but they are all giving us the same message. The 10-year Treasury yield should be a lot higher than it is today. While the Fed has not explicitly engaged in YCC, just the threat of YCC may have served to hold down the 10-year yield.

Here is why this matters for equity investors. First and foremost, fixed income instruments serve as alternatives for equities. If yields are low, then equities are more attractive by comparison.
As well, technology and large-cap growth stocks are forms of duration plays that are more sensitive to bond yields. Even at the current level of the 10-year, the NASDAQ 100 should be underperforming the S&P 500. What happens if the Fed steps back from YCC at the December FOMC meeting? Will growth stocks crash and cyclical and value stocks soar?

Jerome Powell is testifying before Congress tomorrow (Tuesday). Perhaps we will get more clarify then.

11 thoughts on “Will Powell twist?”