Can a bull market begin without the banks? – Humble Student of the Markets

Earnings season has kicked off with reports from the major banks. The market reaction has been mixed so far. From a big picture perspective, history shows that whenever the relative performance of banking stocks have breached a major support level, such events have usually signaled periods of financial stress and bear markets. 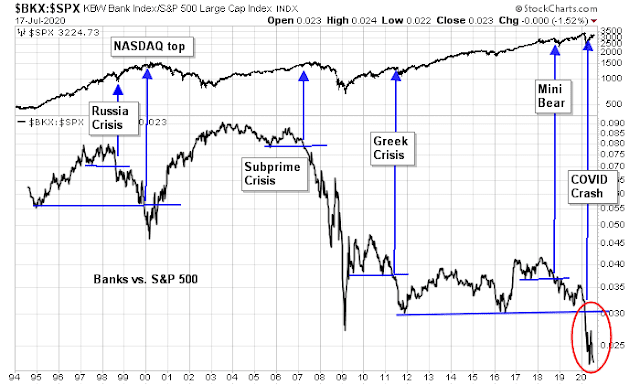 This time, the Covid Crash saw the market fall and recover in the space of a few short months. This begs two important questions for investors.

First, the financial sector is the third largest weight in the index, behind technology and healthcare. Can a bull market begin without the participation of a major sector like this?

Brian Gilmartin pointed out that the sector represents about 10% of S&P 500 weight, but 17% earnings weight, indicating that financial stocks are value stocks. What does the lagging performance of these stocks mean for the growth/value dynamic?

How cheap are banks?

Financial stocks have lagged the market, not just in the US, but globally. The relative performance of this sector has been synchronized globally in the last two years. Even in China, banking stocks staged a relative rally when the Chinese market surged, but their relative returns have retreated as the market cooled off.

How cheap are they? Callum Thomas at Topdown Charts found that global banks are indeed very cheap by historical standards, whether measured by a relative PB ratio, or relative PE10 ratio. He observed that global banks have never been cheaper based on both absolute and relative valuation, and they trade at a “massive 60% discount to the rest of the market on a PE10 basis”. 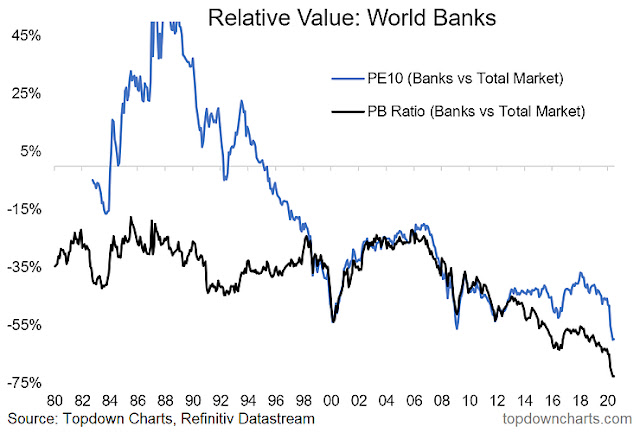 That may not be enough from a sentiment perspective. The BoA Global Fund Manager Survey reported that managers are underweight banks, but sentiment does not appear to be panicked in the manner of the Great Financial Crisis of 2007-09. 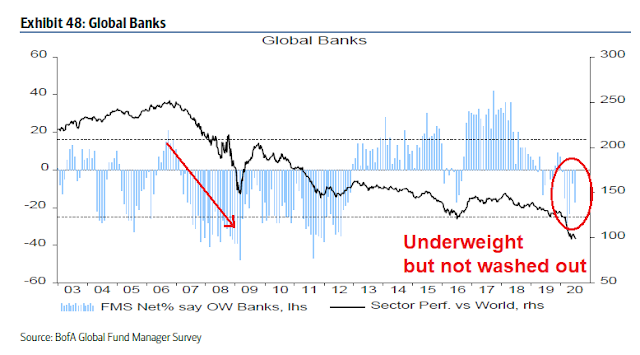 Waiting for the next shoe to drop

I would argue that this sector has not seen the capitulation event needed for a turnaround. In the past, periods of financial stress has been associated with banking crises. We have not had the credit event that sparks a banking crisis just yet. The latest BoA Global Fund Manager Survey shows that investors are overly focused on the COVID-19 Crisis, and the risk of a credit event is barely in the spotlight. 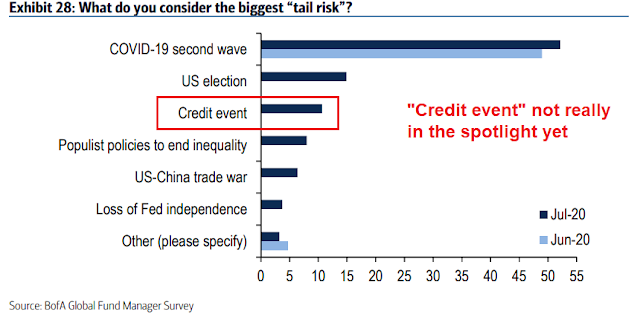 That may be about to change. Just when you thought the banks had “kitchen sinked” by writing off all of the bad loans in Q1, Bloomberg reported that JPM, C, and WFC have set aside about $28 billion in loan loss provisions in Q2. 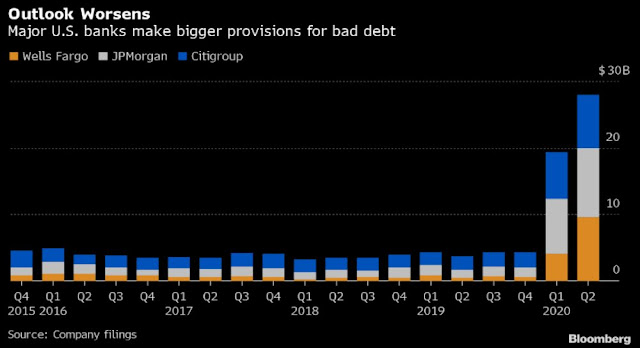 Is this as bad as it gets? I am not sure. Just consider some of these comments from banking CEOs during the earnings calls.

“This is not a normal recession. The recessionary part of this you’re going to see down the road,” JPMorgan Chief Executive Officer Jamie Dimon said Tuesday. “You will see the effect of this recession. You’re just not going to see it right away because of all the stimulus.”

“I don’t think anybody should leave any bank earnings call this quarter simply feeling like the worst is absolutely behind us and it’s a rosy path ahead,” Citigroup CEO Michael Corbat told analysts. “We don’t want people leaving the call simply thinking the world is a great place and it’s a V-shaped recovery.”

Banking executives are echoing the message of the Fed. The path of the recovery depends on progress against the pandemic. This is not your father’s recession.

The number of corporate bankruptcies has spiked to levels last seen during the last crisis, though the value of liabilities in bankruptcy is still relatively tame. 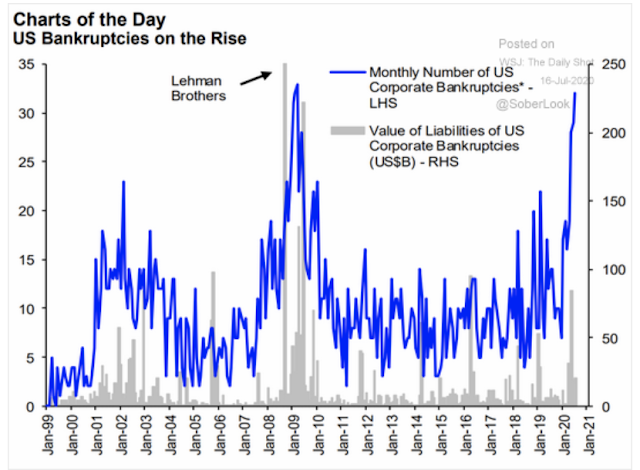 The slowdown is also starting to bite into the household sector. A study by the nonpartisan consumer advocacy group Families USA found that a record 5.4 million Americans had lost their health insurance between February and May. In addition, high frequency economic data shows that consumer spending began to roll over mid-June. What’s more even worrisome is the high-income households are leading the decline. This may be an indication that layoffs are reaching the better paying white collar jobs. 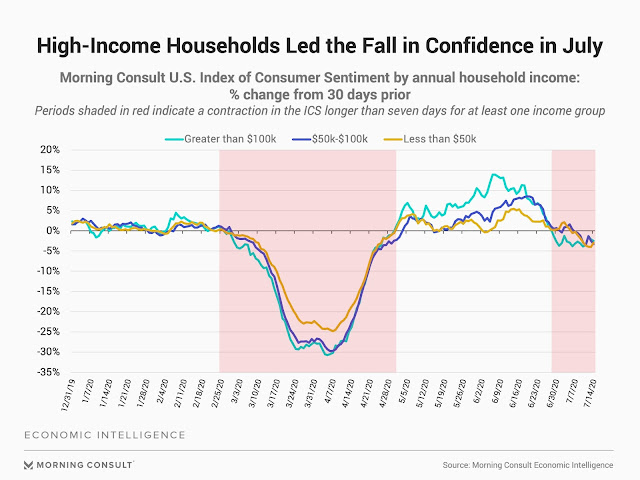 Mortgage delinquencies, which were the first signs of the last housing crisis, have surged. 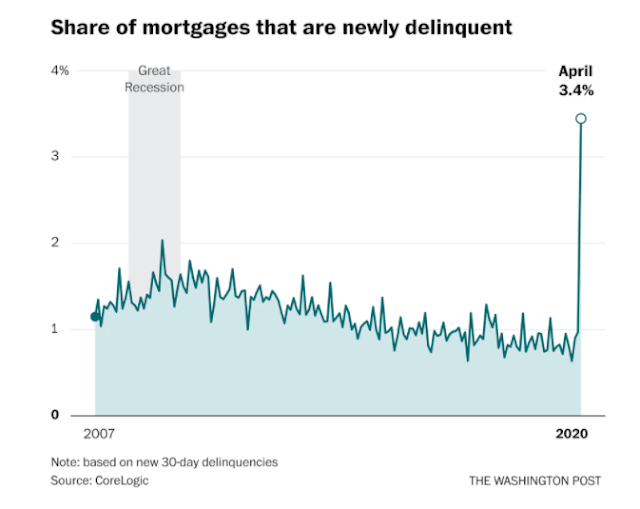 During the first week of this month, 19 percent of Americans had made no housing payment, while an additional 13 percent paid only a portion of their monthly bill… From June to July, the share of renters who are either “very” or “extremely” concerned about being evicted rose from 18 percent to over 21. Similarly, the share of homeowners concerned about foreclosure ticked up from 14 percent to 17 percent.

So far, the fiscal support provided by the CARES Act is creating a limited safety net for consumer spending. Joe Wiesenthal at Bloomberg observed that despite record job losses, total compensation for unemployed workers actually rose because of the CARES Act, whose provisions are set to expire at the end of July. For some perspective on the scale of fiscal support, George Pearkes at Bespoke estimated that a full expiry of the $600 per week unemployment insurance payment would cost the household sector 4.8% of Q1 nominal GDP at an annualized rate. 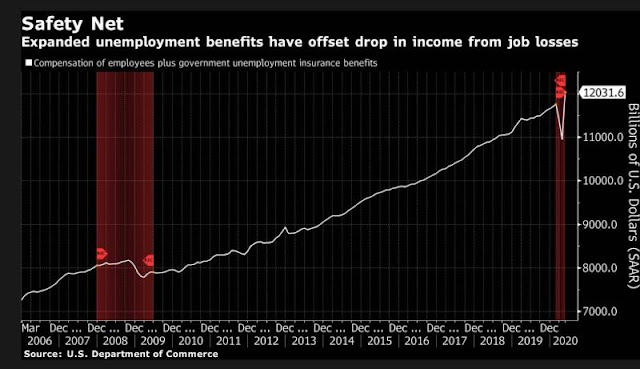 Whether any fiscal support is forthcoming is an open question. The latest tentative proposal from the administration calls for a reduced level of support that is capped at $1 trillion, plus a payroll tax cut. The House Democrats passed a $3 trillion relief bill with very different spending priorities. It is unclear whether both sides of the aisle can come to an agreement before the Congress recess in August.

How is the Fed likely to react? Fed watcher Tim Duy analyzed a recent speech by Fed governor Lael Brainard and concluded that the Fed is likely to engage in yield curve control. Brainard began with an assessment of the path of recovery, and provided a Fed policy roadmap.

Looking ahead, it will be important for monetary policy to pivot from stabilization to accommodation by supporting a full recovery in employment and returning inflation to its 2 percent objective on a sustained basis. As we move to the next phase of monetary policy, we will be guided not only by the exigencies of the COVID crisis, but also by our evolving understanding of the key longer-run features of the economy, so as to avoid the premature withdrawal of necessary support.

She went on to open the door to yield curve control (YCC) as an additional policy tool.

Forward guidance and asset purchases were road-tested in the previous crisis, so there is a high degree of familiarity with their use. Given the downside risks to the outlook, there may come a time when it is helpful to reinforce the credibility of forward guidance and lessen the burden on the balance sheet with the addition of targets on the short-to-medium end of the yield curve.

The Fed will feel pressure to do more without expanding the balance sheet further. That leaves yield curve control as the next likely path forward. [Though] they have to talk it out first.

The Fed last engaged in YCC during World War II, which forced savers to subsidize the government’s finances. Let’s call it what it really is, financial repression. We have seen what different forms of financial repression does to the banking system. In the eurozone, the ECB pushed rates deeply negative, and it cratered bank profitability. The difference becomes obvious when we compare the performance of US and European banking stocks in the last decade (all figures in USD). 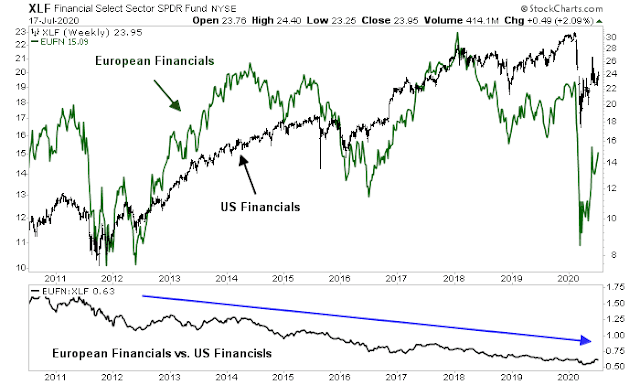 We also have a real-time price signal for the degree of financial repression. The price of gold responds to real interest rates. If the Fed were to artificially push down real rates, it puts upward pressure on gold. As the following chart shows, the relative performance of bank stocks are inversely correlated to gold.

In conclusion, investors should expect more pain ahead for the banking sector. The credit cycle is not yet complete for the latest expansion cycle, and banks are bracing for a wave of bankruptcies. The Fed is about to engage in financial repression that will depress banking profitability. From a technical perspective, the relative performance of the NASDAQ 100 to the Bank Index isn’t washed out yet, indicating that growth is likely to dominate value for the time being. Historically, the relative performance of this ratio has not bottomed out until the 52-week rate of change reaches -70%. That said, the 14-week RSI is exhibiting a positive divergence, which is a signal that the final capitulation is near. 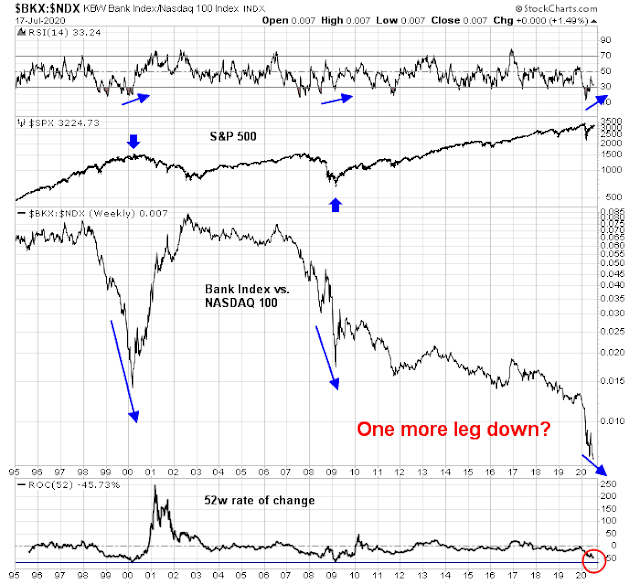 The banks will have their day, but not yet. By implication, there is one more leg down for this bear market, and one more leg up for the growth/value trade before it’s all over.

21 thoughts on “Can a bull market begin without the banks?”