A Covid recovery? – Humble Student of the Markets

Mid-week market update: The market has taken on a risk-on tone as news of a promising Moderna vaccine trial hit the tape. While the relative performance of healthcare stocks haven’t done much for several weeks, they did catch a recent bid. 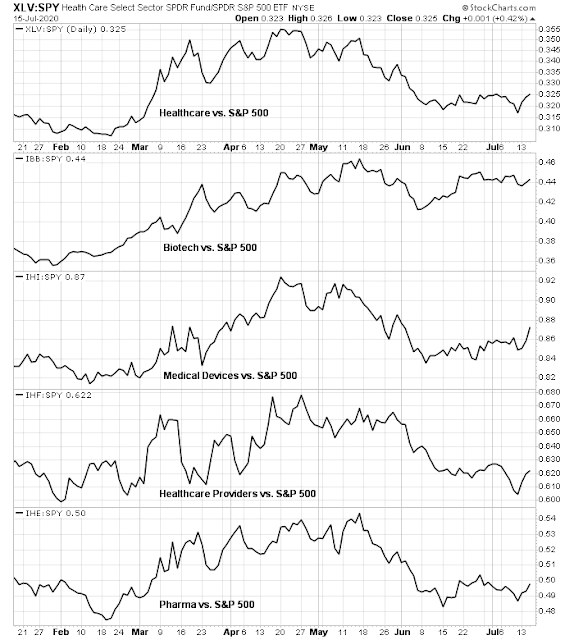 As well, cyclical stocks have also perked up as they responded to the hopes of a post-pandemic world. 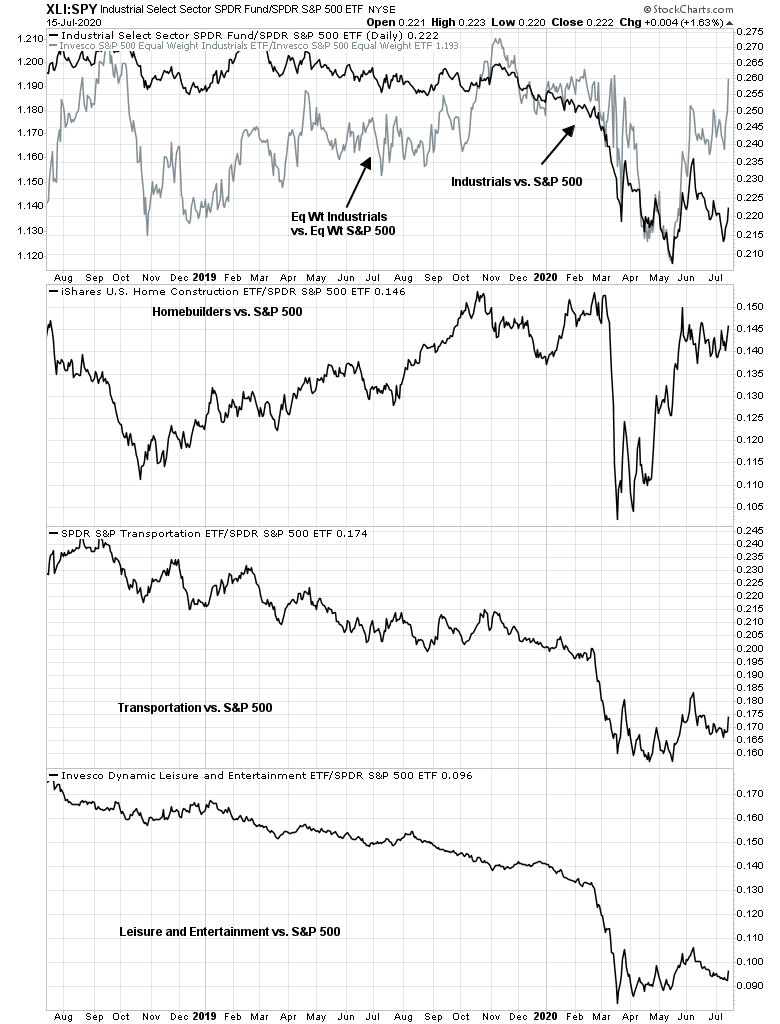 Is this the start of a COVID recovery? I analyze the issues surrounding vaccine development and provide a framework for evaluation.

Vaccines have historically taken years to develop. Dr. Anthony Fauci recently laid out the criteria for approval in a Bloomberg article:

“You’ve got to be careful if you’re temporarily leading the way vs. having a vaccine that’s actually going to work,” he told the BBC recently. Most vaccines in development fail to get licensed. Unlike drugs to treat diseases, vaccines are given to healthy people to prevent illness, which means regulators set a high bar for approval and usually want to see years’ worth of safety data. In the Covid-19 pandemic, it’s not yet clear what regulators will accept as proof of a successful and safe vaccine. The U.S. Food and Drug Administration has said a vaccine would need to be 50% more effective than a placebo to be approved and would need to show more evidence than blood tests indicating an immune response. Regulators in other countries haven’t spelled out what would be acceptable.

History is littered with instances of over eager drug developments. Just look up the Guillain-Barré syndrome, which was an unexpected side effect of the 1978-79 flu vaccine that President Ford rushed into production. Then there is thalidomide, which was promoted for anxiety, insomnia, “tension”, and morning sickness . The drug was found to cause severe birth defects. Babies were born with either no arms or legs or horribly disfigured limbs. That’s why the drug approval process takes so long. Take shortcuts and you don’t know about the long-lived side effects like birth defects.

Investors need to temper their expectations and not overreact like a puppy chasing after a new squeaky toy whenever a company announces a promising result.

Courtesy of a useful vaccine tracker website, here are the outlines of four leading candidates that are in either phase II or phase III trials.

Reuters separately reported that China’s CanSino has a promising candidate. The company is contacting Russia, Brazil, Chile, and Saudi Arabia for phase III trials involving 40,000 patients. As well, the vaccine is being given to Chinese troops on an experimental basis. The timeline for the completion of phase III trials is also late 2021.

The two remaining lead candidates are being developed in the West. The Moderna vaccine, which the market got all excited, emerged from a phase I trial with promising preliminary results. Before everyone gets all excited, the trial only consisted of 45 healthy volunteers aged 18-55, and the trial was designed to test whether the vaccine is safe, not whether it’s effective. Nevertheless, the study showed that all subjects showed the production of neutralizing antibodies against SARS-CoV-2, though there is no indication how long the antibodies lasted in patients.

The company is now going into a phase III trial by recruiting 30,000 patients. Still, this process can’t be rushed. Even the process of recruiting 30,000 appropriate subjects can take months. For some perspective, 30,000 is roughly the size of the 101st Airborne Division. Imagine if you had to create the 101st from scratch. What’s the bureaucracy to recruit that many people, induct them, and put them through the first level of basic training. As with the other vaccine candidates, it is unrealistic to expect robust results until 2021.

There are other issues with the Moderna vaccine, it is based on mRNA technology which may be difficult to scale in production. As well, an analysis of insider activity in the stock finds mass selling. In the last six months, there was one timely insider buy by a director in February, and a whopping 78 sales by officers and directors. If insiders are so confident about the vaccine, why are they selling? 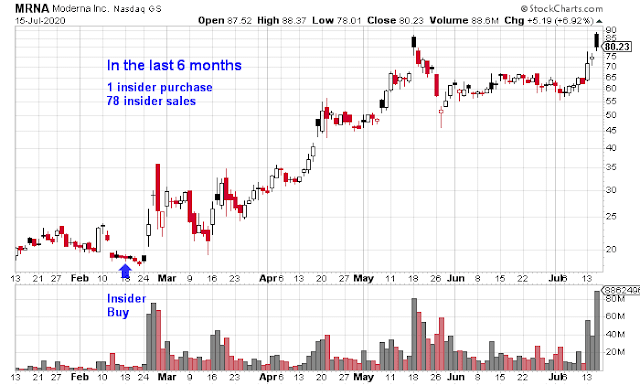 Finally, there is the Oxford vaccine backed by AstraZeneca. The vaccine is in a phase III trial that is not expected to be complete until the second half of 2021.

There is also some controversy over the Oxford vaccine. A Forbes article cast some doubt over the effectiveness of the vaccine in animal tests. All of the rhesus monkeys became infected when exposed to SARS-CoV-2, and the level of neutralizing antibodies was very low. However, the vaccine did protect the animals when they were afflicted with COVID-19. In other words, the vaccine does not protect a patient from infection, but it does stop you from going to the hospital and dying if you become ill. It is unclear whether vaccinated patients acquire immunity should they become infected, though the vaccine seems to mitigate the effects of the virus.

The hurdles facing the Oxford vaccine may not be an overwhelming problem. Not all vaccines prevent infection. As an example, the Salk polio vaccine also doesn’t prevent infection, but it does mitigate the effects of the illness.

Assuming that Oxford vaccine is successful, it creates a public health policy problem. Vaccinated patients who become afflicted with COVID-19 could in theory infect others. Authorities would need to effect a high vaccination rate in order to create herd immunity. This begs the question of whether enough people are willing to be vaccinated.

Bottom line, temper your expectations. Even with promising results and shortened approval process, a realistic timeline for a vaccine to be available is probably mid to late 2021.

In the meantime, sentiment appears extended in the short run. Jason Goepfert at SentimenTrader pointed out option sentiment is at a bullish extreme, which is contrarian bearish. 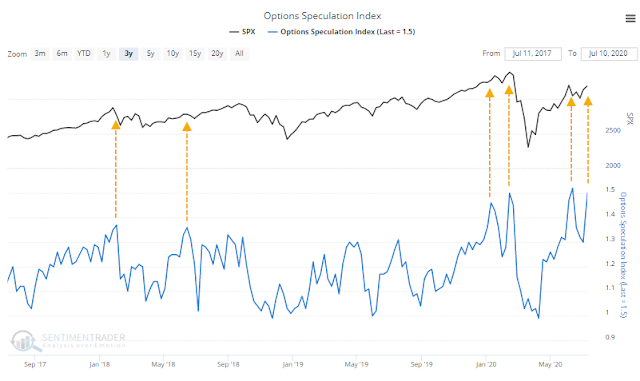 Brokerage firm sentiment has also become extreme. This indicator measures the percentage of stocks with buy ratings, and the last time it was this high was 2014.

As well, FactSet calculates a bottom-up aggregated target price. The 12-month target is 3,352. Historically, analysts have over-estimated the actual prices by 3.6% in the last 5 years, by an average of 2.7% in the 10 years, and by 9.7% in the last 15 years. This makes the 12-month target range 3,027 to 3,261, which represents very little upside potential from current levels. 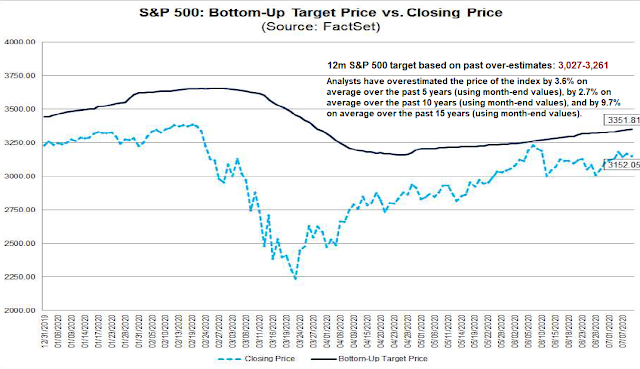 In addition, there are two sources of near-term uncertainty. We are entering Q2 earnings season, and most companies have withdrawn guidance. That’s like sailing in fog with possible icebergs in the water. In addition, it is unclear whether Congress with agree to a compromise bill for more fiscal stimulus. The latest round of CARES Act stimulus ends July 31, and states will have trouble re-programming their computers to effect new payments after July 25, which is only 10 days away. The Republicans, who control the Senate, and the White House have not even agreed on the details of a package. The lack of a united front has prevented them from presenting a proposal to the Democrats, who control the House.

My inner investor remains neutrally positioned at the asset allocation weights specified by his investment policy. My inner trader is short, but only during daylight hours (for more details, see My inner trader returns to the drawing board). He has set a stop just above the top of the island reversal at 3240.

57 thoughts on “A Covid recovery?”