Good news, bad news about a second wave – Humble Student of the Markets

Mid-week market update: I have some good news, and bad news about a second wave. The bad news is new case counts are rising dramatically in the US. The good news is fatalities are not rising. 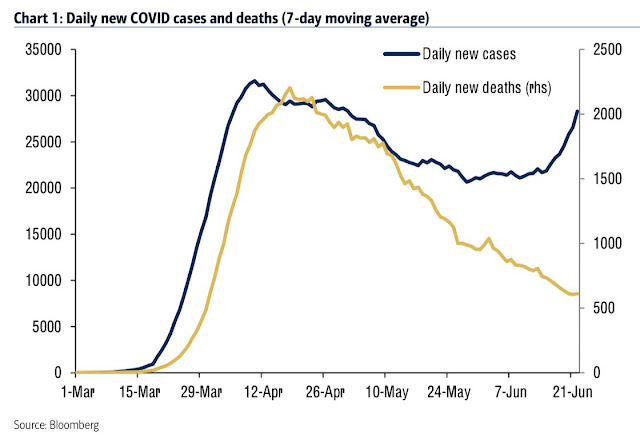 Here is some more bad news. Marketwatch reported that Dr. Anthony Fauci, head of infectious diseases at the National Institute of Health, said that “We are still in the middle of the first wave. So before you start talking about what a second wave is, what we’d like to do is get this outbreak under control over the next couple of months.”

For investors, this matters for a couple of reasons.

The falling fatality rate seems to be a puzzle, at first glance. Consider the more problematical states where new cases have been rising. 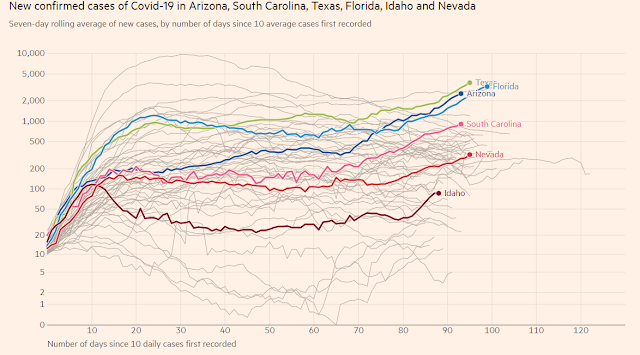 Even in those states, death rates have been mostly flat, except for Texas. The death rate in Texas has been rising slowly, but they have not spiked in line with the new case rate. 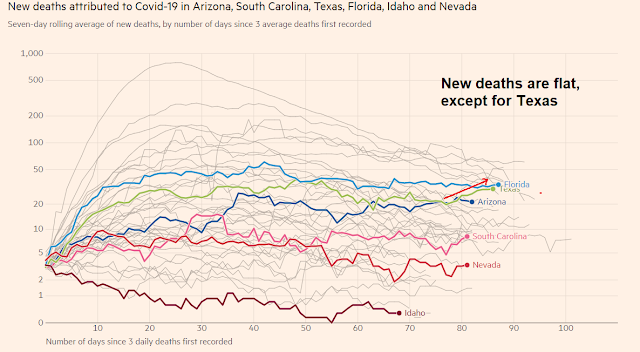 One possible explanation can be found from the Florida data. The median age of COVID-19 patients have been falling dramatically. Since the young tend to have fewer vulnerable conditions, their survival rate is higher than an older population. 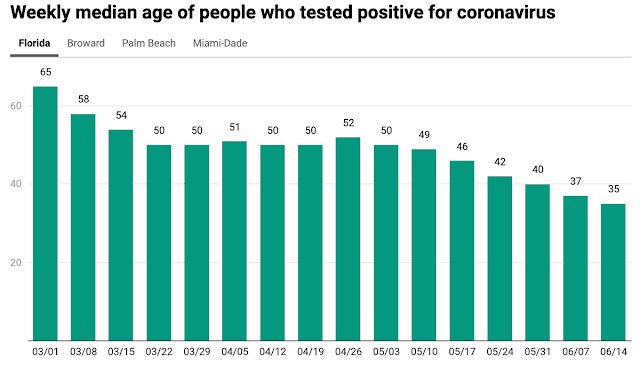 That’s the good news. The bad news is COVID-19 survivors are often saddled with chronic health conditions, which will be a long-term drag to productivity, and those people will be a burden to the healthcare system for years to come. Moreover, they will face higher cost for medical insurance because of their pre-existing conditions. That said, hospitalizations in a number of the surge states are rising dramatically. Here is Arizona. 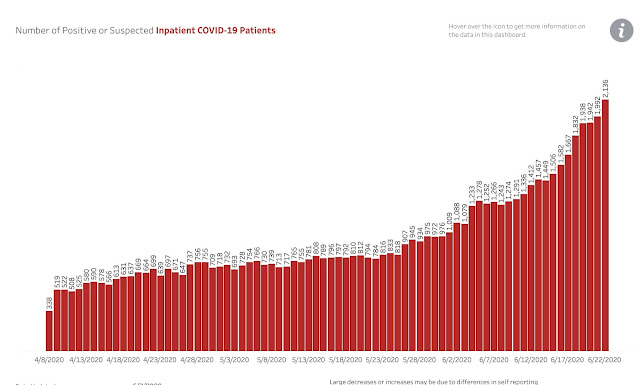 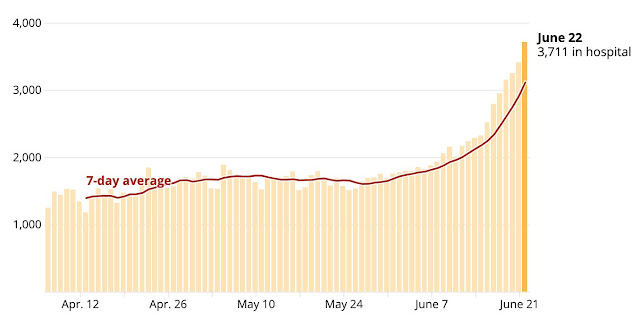 The pandemic is unquestionably a human tragedy, but what matters to investors is the outlook for economic growth and corporate earnings. How would a second pandemic wave affect the economy?

Most of the surge states are under the control of Republican state governments, which have shown great reluctance to shut down their economies again. While the authorities may not necessarily want to reimpose stay-at-home orders, local economies may still slow because of individuals choosing to stay home.

Trump’s less than full capacity at his Tulsa rally serves as a useful case study. The Tulsa fire marshal attendee count was just under 6,200 attendees in an indoor stadium with a capacity of 19,000, and when the campaign touted that it had expressions of interest from over a million people for tickets. From an investor’s point of view, the most bullish explanation is a swarm of youth coordinating on TikTok overwhelmed the booking system with ticket requests. The NY Times reported that Trump campaign managers Brad Pascale attributed the low turnout to the media instead of “leftists and online trolls”.

“Leftists and online trolls doing a victory lap, thinking they somehow impacted rally attendance, don’t know what they’re talking about or how our rallies work,” Mr. Parscale said. “Registering for a rally means you’ve RSVP’d with a cellphone number and we constantly weed out bogus numbers, as we did with tens of thousands at the Tulsa rally, in calculating our possible attendee pool.”

Instead, he blamed the news media for the low turnout.

“The fact is that a week’s worth of the fake news media warning people away from the rally because of Covid and protesters, coupled with recent images of American cities on fire, had a real impact on people bringing their families and children to the rally,” he said.

The most bearish explanation is that die-hard Trump supporters, who tend to be skeptical that COVID-19 poses a threat to themselves, decided that it was not worth the risk to travel to Tulsa for the rally. If such a dedicated group turns out to be so risk-averse that they won’t attend a rally featuring their hero, what does that tell us about the prospect for reopening the economy in the face of such skittishness?

The Open Table data for Houston serves as a cautionary tale for bulls who are enthusiastic about a V-shaped recovery. For some context, the Houston Chronicle reported that 40 Houston restaurants have closed temporarily because some staff had tested positive for COVID-19. 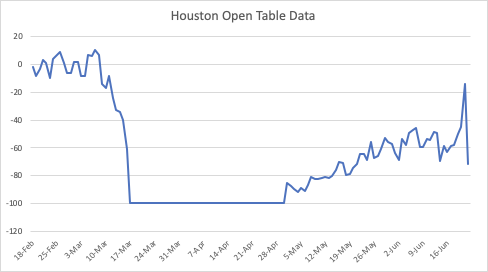 IHS Markit’s US June Services PMI printed at 46.7, which missed expectations of 48, and the reading was below 50 indicating contraction. The services economy dwarfs manufacturing, and further weakness are signaling an anemic recovery. 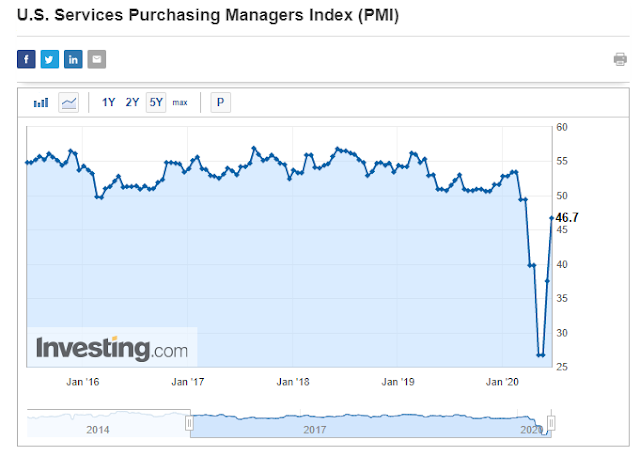 Small businesses are especially vulnerable to the slowdown. As the chart below shows, revenue growth has stalled after the initial gains from reopening. 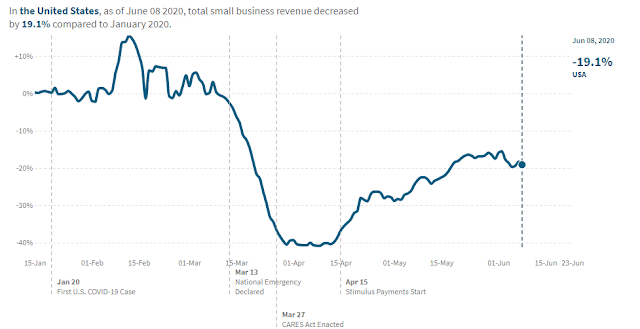 Their cash buffers are low. 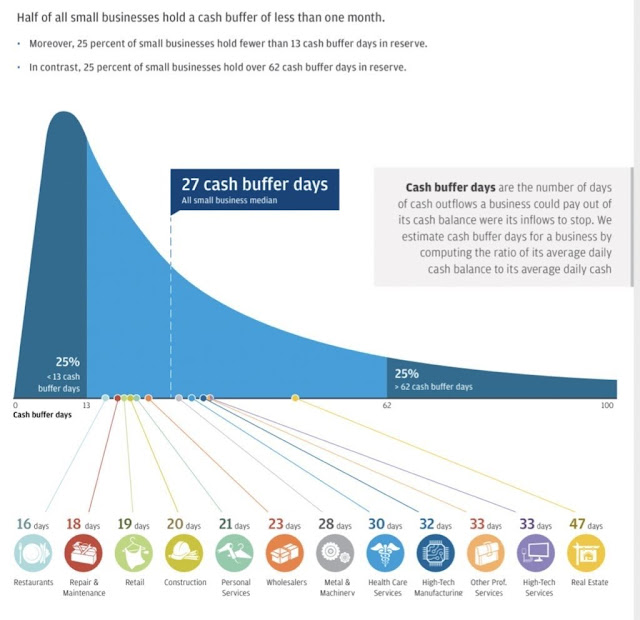 They are important to the economy. Small businesses with less than 500 workers employ 47% of total workers, and cover 40% of total payroll. 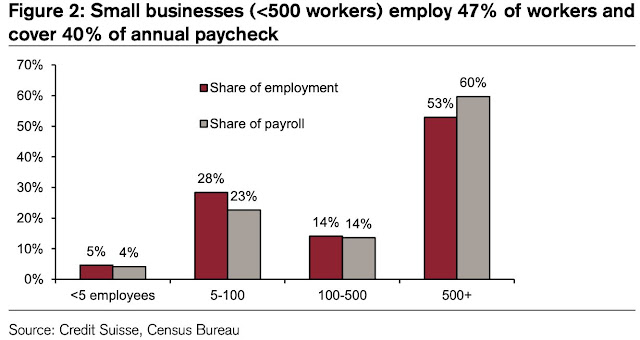 Jerome Powell showed concern in his Senate testimony last week that “the longer the downturn lasts, the greater the potential for longer-term damage from permanent job loss and business closures”. That’s precisely the scenario that the American economy is facing should the pandemic force a second round of shutdowns, either by edict, or by individuals choosing to avoid interaction with the public.

Any further slowdown is likely to spark another round of layoffs. Here are some estimates of the jobs most at risk in a second wave. While the first wave of job losses were concentrated among low-paid workers, the second wave is likely to affect better paid white-collar workers. The top five on list are admin and support services, professional, scientific, and technical services, wholesale trade, education, and insurance. All of these industries tend to be much better paying than the restaurants and hospitality job layoffs of the first wave. 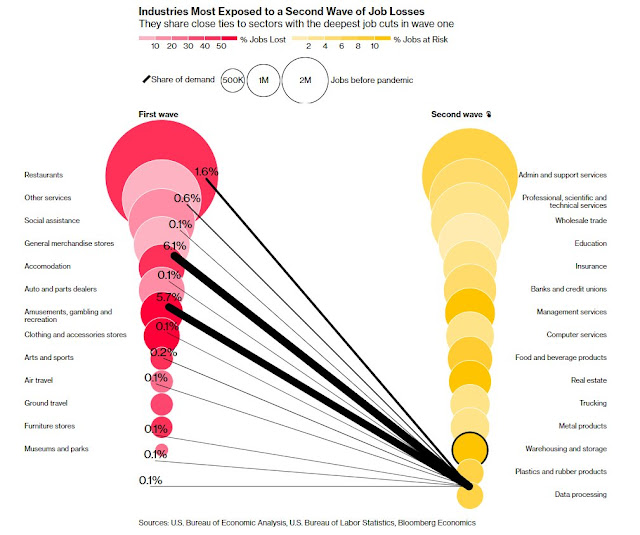 For investors, that’s the true downside risk represented by a second wave.

Looking towards Wall Street, the market continues to chop sideways this week. The “island” of the island reversal is acting as if it’s surrounded by a moat. While the bulls have been unable to rally to close the gap and rally the market to the island, the bears haven’t been able to seize control of the tape either. The hourly chart shows a second bearish island reversal, which is an interesting formation that I haven’t seen before.

Many of the internals that I have been monitoring are still exhibiting negative divergences. The high beta to low volatility ratio is still falling, indicating a reduced equity risk appetite. 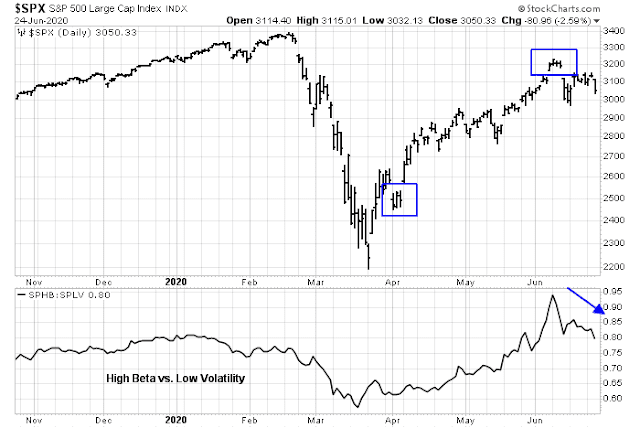 The reopening pairs are also pointing south. Both the global pair (global airlines to Chinese healthcare) and the US pair (Leisure and entertainment to healthcare) are declining. If the market is getting excited about a reopening sparked V-shaped recovery, these factors are certainly not showing much signs of enthusiasm. 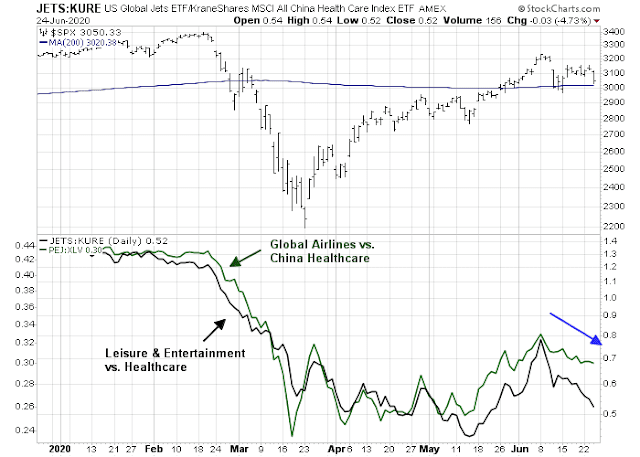 As well, the relative price performance of high yield, or junk, bonds relative to their duration-adjusted Treasuries is also flashing a minor but persistent negative divergence, which is a signal of unenthusiastic credit market risk appetite.

As we approach quarter-end, Market Ear reported estimates of re-balancing required for portfolios to return to their target allocations. All estimates involve the sale of equities, though not all of the sales will be US equities.

Key points via JPM, according to us, the best on the street when it comes to estimating these flows.

“we estimate around -$70bn of negative equity rebalancing flow by balanced mutual funds globally into the current month end….

we estimate that the pending equity rebalancing flow by US defined benefit pension funds into the current quarter end is likely modestly negative at around -$65bn….

Norges Bank into the current quarter end is likely modestly negative at around -$10bn….

My inner trader is bearish, but positioning is light. He will not become an enthusiastic bear until the market break down out of the rising channel, and that break should coincide with a violation of the 200 day moving average. 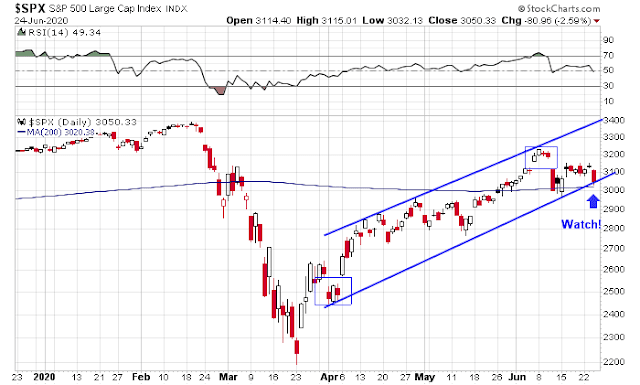 55 thoughts on “Good news, bad news about a second wave”