Healing? – Humble Student of the Markets

Mid-week market update: Is the market exhibiting signs of froth, or is the economy healing? There are signs of both. As Fed chair Powell indicated, the economy has encountered a health related shock, and the Fed can only do so much to stabilize markets. It cannot provide a cure.

Some of the market based indicators of covid related anxiety are showing signs of healing. 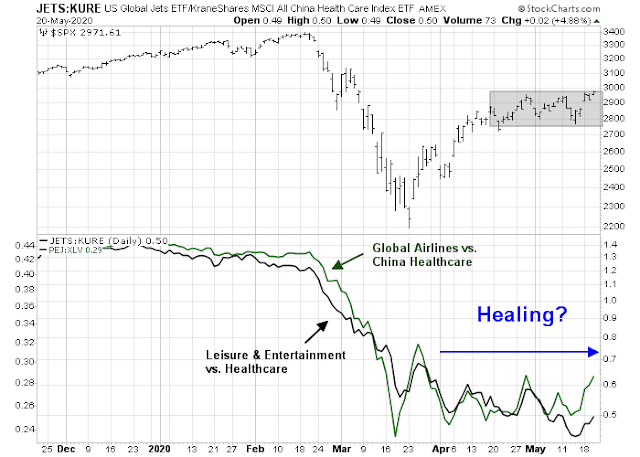 Indeed reported that job postings are stabilizing and starting to improve from their worst levels. 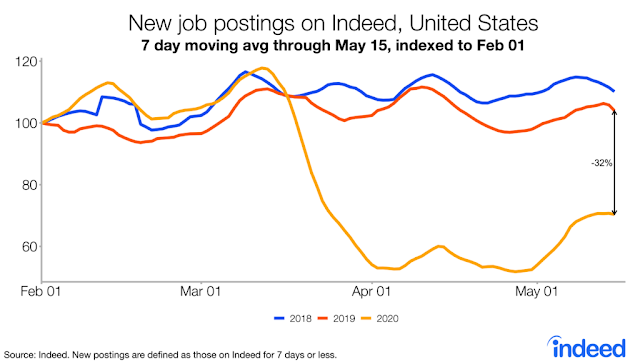 As the northern hemisphere enters spring and approaches summer, a  non-peer reviewed Harvard study found a weak effect of temperature and humidity on virus transmission.

We show that the delay between exposure and detection of infection complicates the estimation of weather impact on COVID-19 transmission, potentially explaining significant variability in results to date. Correcting for that distributed delay and offering conservative estimates, we find a negative relationship between temperatures above 25 degrees Celsius and estimated reproduction number (R), with each degree Celsius associated with a 3.1% (95% CI: 1.5-4.8%) reduction in R. Higher levels of relative humidity strengthen the negative effect of temperature above 25 degrees. Moreover, one millibar of additional pressure increases R by approximately 0.8 percent (0.6-1%) at the median pressure (1016 millibars) in our sample. We also find significant positive effects for wind speed, precipitation, and diurnal temperature on R. Sensitivity analysis and simulations show that results are robust to multiple assumptions. Despite conservative estimates, weather effects are associated with a 43% change in Rbetween the 5th and 95th percentile of weather conditions in our sample. 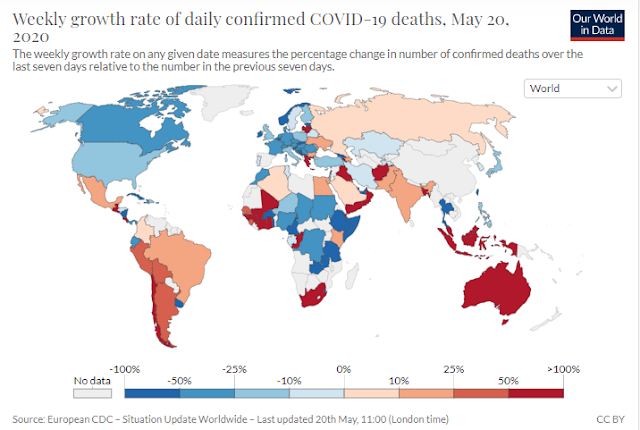 The US trend is less clear. While the hardest hit states of New York and New Jersey have bent the curve, the fatality rates of most other states have been flat, and not falling. Some states, like Florida, have seen death rates edge up, which is a worrisome sign as different jurisdictions relax their stay-at-home edicts. 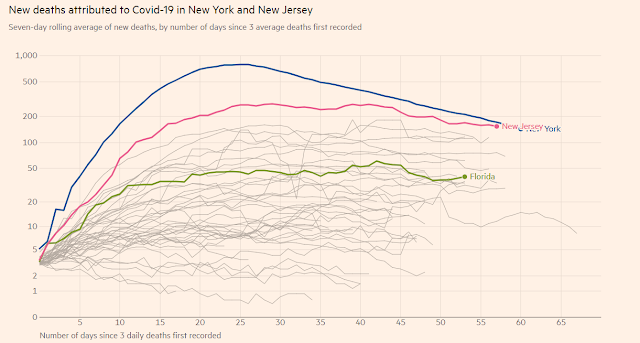 However, Bloomberg reported a disturbing sign from China that the virus may be mutating, and infections are presenting themselves differently. If this strain were to spread, current lockdown approaches of containment and mitigation may be insufficient to combat its effects.

Chinese doctors are seeing the coronavirus manifest differently among patients in its new cluster of cases in the northeast region compared to the original outbreak in Wuhan, suggesting that the pathogen may be changing in unknown ways and complicating efforts to stamp it out.

Patients found in the northern provinces of Jilin and Heilongjiang appear to carry the virus for a longer period of time and take longer to test negative, Qiu Haibo, one of China’s top critical care doctors, told state television on Tuesday.

Patients in the northeast also appear to be taking longer than the one to two weeks observed in Wuhan to develop symptoms after infection, and this delayed onset is making it harder for authorities to catch cases before they spread, said Qiu, who is now in the northern region treating patients.

What about the Moderna vaccine, which got the market all excited? Stat News criticized the Moderna press release because it didn’t show sufficient details. The study states that 45 volunteers received various doses of the vaccine, and eight developed neutralizing antibodies. So what happened to the other 37?

Later, the statement indicated that eight volunteers — four each from the 25-microgram and 100-microgram arms — developed neutralizing antibodies. Of the two types, these are the ones you’d really want to see.

We don’t know results from the other 37 trial participants. This doesn’t mean that they didn’t develop neutralizing antibodies. Testing for neutralizing antibodies is more time-consuming than other antibody tests and must be done in a biosecurity level 3 laboratory. Moderna disclosed the findings from eight subjects because that’s all it had at that point. Still, it’s a reason for caution.

While many of these signs of healing are constructive, back on Wall Street, the market is getting frothy. In a commentary written on Tuesday, Joe Wiesenthal of Bloomberg thinks that something isn’t adding up.

A thought I keep having throughout this economic crisis is that it’s extremely weird. For example, let’s start with the obvious that it’s weird that the NASDAQ is solidly up on the year, amid one of the worst economic shocks ever. But it’s not just tech stocks doing well. It’s odd, for example, that we’re experiencing a boom in big ticket items like recreational vehicles (just look at shares of Camping World) at a time when so many people are losing their jobs, or their incomes are so uncertain. It’s odd that we’re seeing surging prices for illiquid collectibles, like vintage Jordan’s or old baseball cards. You don’t normally expect to see that when people are anxious about money. The electronic DJ duo The Chainsmokers are raising a venture capital fund. That’s not a typical crisis headline. And then there’s this whole phenomenon of legendary investors like Warren Buffett or Stan Druckenmiller sounding anxious about this market, while retail traders on Robinhood keep taking the opposite sides of the bet. The list goes on and on, but suffice to say there are many things about this crisis that don’t quite add up.

The latest BAML Global Fund Manager Survey shows a cautious view. The consensus calls for a slow recovery, and the current rally is a bear market rally. 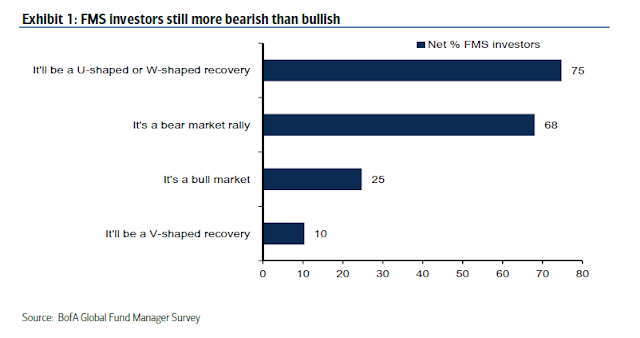 While this cautious view might suggest the current market rally is becoming the pain trade, global managers are only slightly underweight equities, and they have all piled into the US as the last refuge of growth. 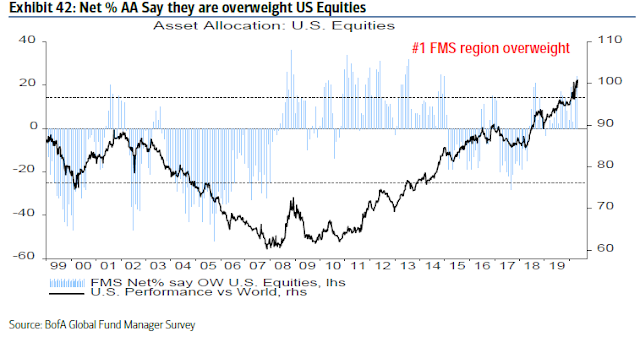 Something isn’t adding up.

In the meantime, the market is becoming frothy. FT reported that stock trading is now the new sports betting. Three of the top online brokerages had nearly 800K new users in March and April .SentimenTrader observed that small option buyers have been piling into call options, which is contrarian bearish. The adage of “young bears and old bulls” certainly fits the current go-go sentiment climate. 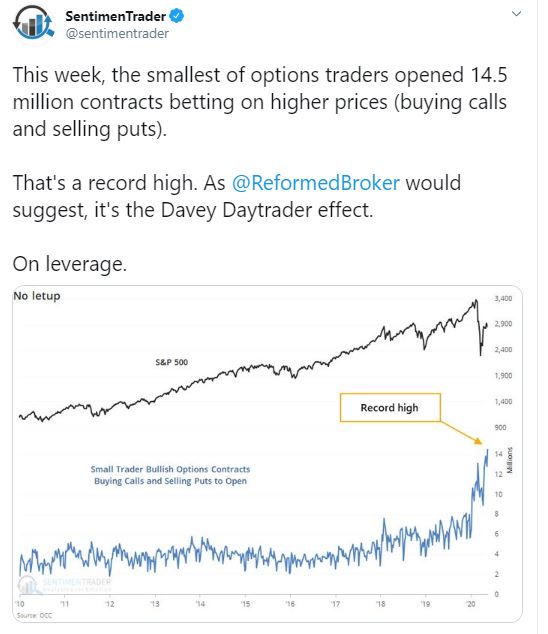 The equity-only put/call ratio hit 0.46 yesterday. In the past, the market has encountered difficulty advancing when it reached these levels in the past. 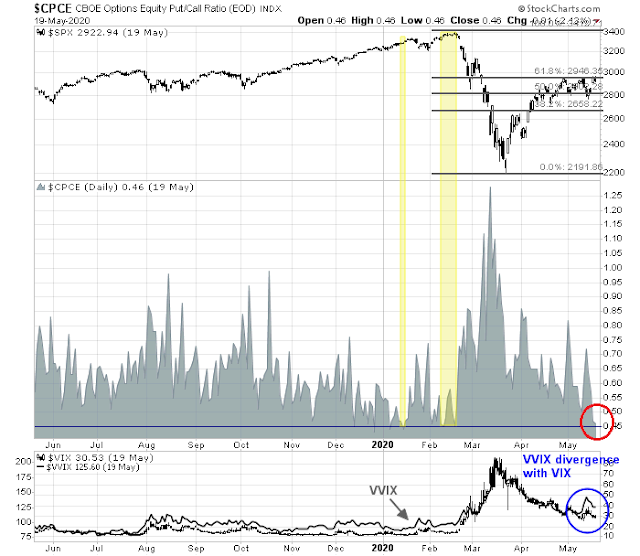 The credit markets are not entirely impressed with the equity advance. The price of credit protection is not confirming the stock market rally. 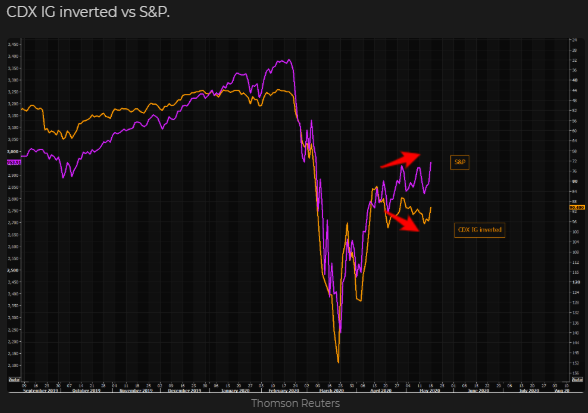 To be sure, the Fed has stepped in to stabilize markets. As a result, companies rushed to raise cash in the bond market to facilitate their liquidity needs. 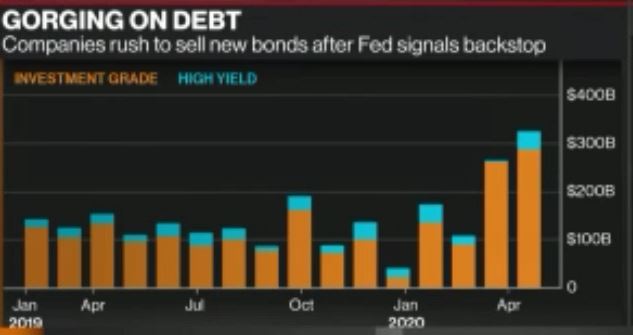 However, the credit risk of outstanding debt is worsening. I don’t want to be Apocalyptic, this just represents a nascent risk should the economy and financial conditions worsen. It does not represent an immediate risk to the markets right now.

Moody’s also estimates that “Investor recoveries upon default will be lower during the current default cycle than they were during the 2008-09 downturn, with recoveries on first-lien debt likely to be worse than they have been in the past.”

As well, valuations are extended. The forward earnings yield, or the inverse of the forward P/E, has fallen to levels last seen during the dot-com bubble. 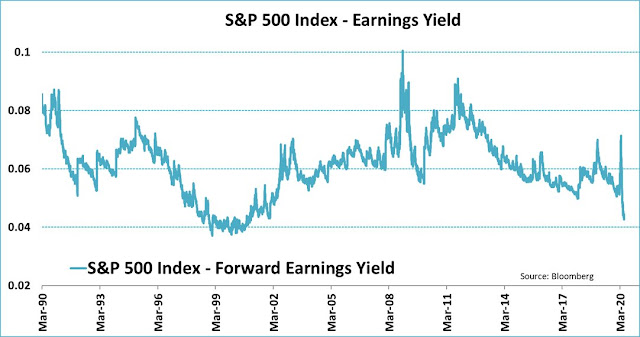 Top of the range?

Tactically, the market is highly overbought on a 3-5 day time horizon. The SPX is testing the 61.8% Fibonacci resistance level while exhibiting a negative 5-day RSI divergence. There is also a minor divergence between the VIX Index and VVIX, which is the volatility of the VIX. The 10-year Treasury yield remains range-bound. This array of market internals suggest that the stock market is also range bound, and at the top of its range.  The bull case scenario calls for a test of the 200 dma at about 3000. 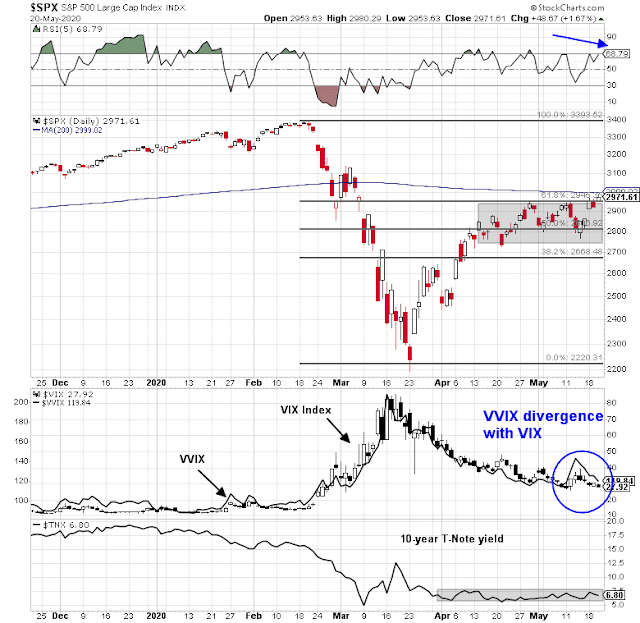 My inner investor was underweight equities, and he is slowly and opportunistically unwinding his underweight position to a neutral weight.

My inner trader is short the market, and he has set a stop loss zone of 2970 on a closing basis. I was overly distracted at the close writing this publication that I did not have time to act on that trigger, but if the market were to remain at or above these levels in the at the end of the first hour on Thursday, I will be stopped out.