Earnings Monitor: Digging in for the long haul – Humble Student of the Markets

We are continuing our coverage of earnings season during these turbulent times. With 90% of the index having reported, this will be the final earnings monitor of the Q1 earnings season. This week, we are seeing greater additional signs of stabilization, but companies are digging for the long haul.

Let’s begin with the big picture. FactSet reported that the bottom-up consensus forward 12-month estimate fell -0.64% last week (vs. -1.4% the previous week), and -20.0% since downgrades began nine weeks ago. The EPS and sales beat rates were both below their 5-year historical averages. 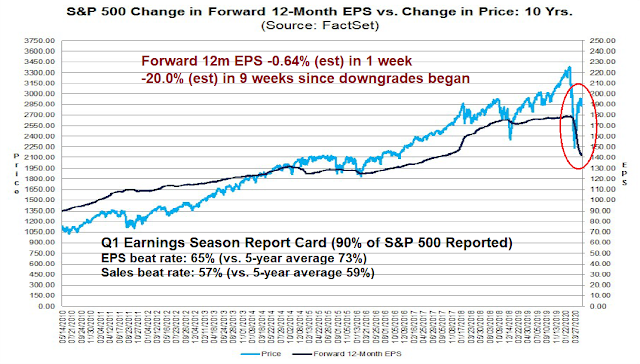 There was more good news, and bad news the FactSet summary of Q1 earnings reports. Let’s start with the good news. The speed of earnings downgrades is decelerating. Forward 12-month EPS fell -0.64% last week, compared to -1.4% the previous week. This is a marked improvement from the experience of the past several weeks, when estimates fell consistently by -1% or more. Estimate revision deceleration can be attributed to the fact that bottom-up EPS estimates are starting to converge to top-down estimates. The 2020 bottom-up consensus estimate of $129.16 is within striking distance of the top-down estimate of $120-$125. However, the bottom-up 2021 estimate of $164.68 is still a little elevated compared to the top-down consensus of $150. 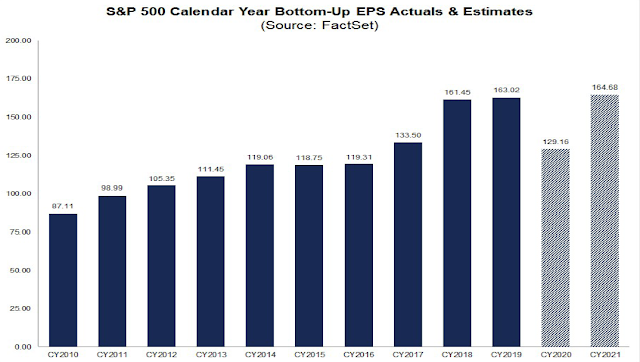 As well, the market is becoming immune to bad news. Stocks were reacting positively to earnings beats, and negatively to misses. However, it did not punish earnings misses as badly as it has historically. 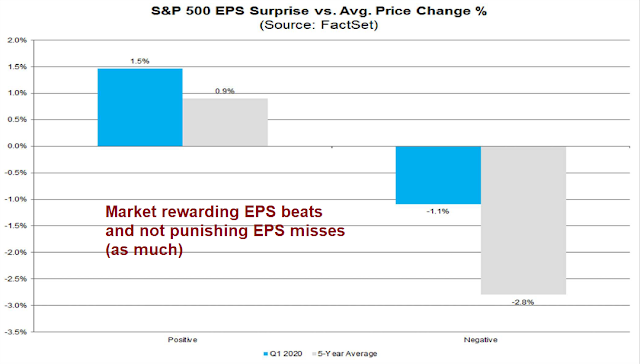 However, expectations are high. The Street is expecting a V-shaped recovery in earnings. 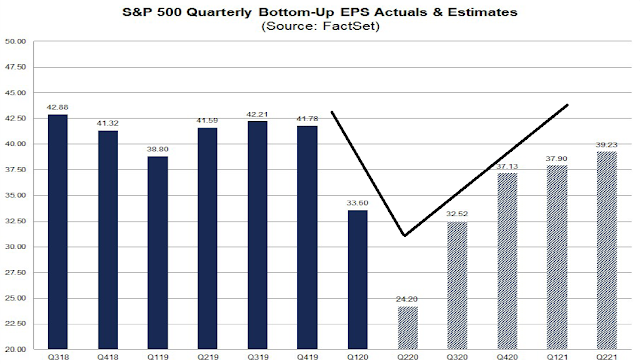 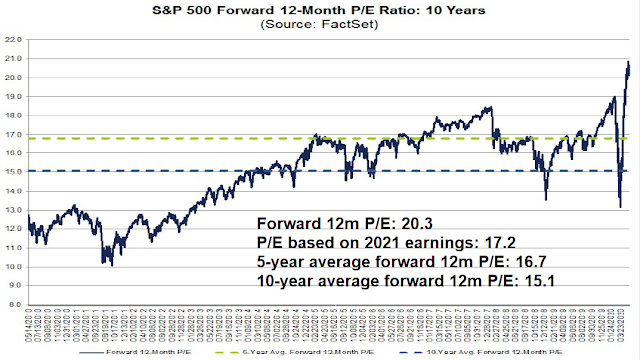 Voices from the trenches

What are companies saying? Here is the summary from The Transcript, which summarizes company earnings calls. The decline in sales has stabilized, but a full recovery is going to take a long time. These comments cast doubt on the strong V-shaped earnings recovery forecast by the Street.

Economic activity is trending positively as shelter in place orders are slowly lifted around the economy. The data is better than it was but still very bad for any other environment. Markets have discounted a quick return to normalcy, but this week’s comments suggest that business leaders expect the recovery to take longer. For the hardest-hit industries, it could be years before they are operating at peak levels again. And even if demand snapped back today it could take months for the supply side of the economy to rev back up. Importantly, employment will likely rebound slower than the rest of the economy, which is a big deal for the demand side of the economy given how high unemployment numbers are.

Even Jay Powell hedged when asked about his expectations for a recovery in his weekend 60 Minutes interview. Much depends on the fight against the virus. While he is forecasting a bounce back in the second half of 2020, everything has to go right, and the recovery will take a long time [emphasis added].

The big thing we have to avoid during that period is a second wave of the virus. But if we do, then the economy can continue to recover. We’ll see GDP move back up after the very low numbers of this quarter. We’ll see unemployment come down. But I think though it’ll be a while before we really feel, well recovered.

Much depends on the absence of a second wave of infections.

Powell did sound the obligatory optimistic long-term tone (as did Warren Buffett):

In the long run, and even in the medium run, you wouldn’t want to bet against the American economy. This economy will recover. And that means people will go back to work. Unemployment will get back down. We’ll get through this. It may take a while. It may take a period of time. It could stretch through the end of next year. We really don’t know. We hope that it will be shorter than that, but no one really knows. What we can do is the part of it that we can control — is to be careful as businesses go back to work. And each of us individually and as a group, you know, take those measures that will protect ourselves and each other from the further spread of the virus.

Here are the key risks:

There’s a real risk that if people are out of work for long periods of time, that their skills atrophy a little bit and they lose contact with the workforce. This is something that shows up in the data — that longer and deeper recessions tend to leave behind damage to people’s careers. And that weighs on the economy going forward.

You could say the same thing about businesses. The small and medium size businesses that are so important to this country, if they have to go through a wave of avoidable insolvencies, you’ve lost something there that’s more than just a few businesses.

You know, it’s really the job creation machine. And if that happens, it will take some time to recover from it.

Former Fed economist Claudia Sahm had a far darker take of the Powell interview in a Twitter thread, She believes that Powell put too much emphasis on the best case scenario, and she was shocked that he said “recession” and even “depression” on national TV. Federal reserve staff were not even allowed to utter the “recession” word in the building.

absolutely no surprise @federalreserve Chair Powell lays it down, we ain’t bouncing back … I learned real world macro and top notch forecasting at @federalreserve, you know I’m deeply pessimistic, his staff must be running through worst scenarios https://economics.cmail19.com/t/ViewEmail/d/64D116D8576D38CF2540EF23F30FEDED/54DDC383BBB39FD140EE66FE10287772

I know nothing about current staff forecast … even so, I could write a close copy from my 12 years at @federalreserve, I wrote Tealbook twice and know the tools deeply, what Powell’s saying out loud is the most optimistic read on the economy , he’s getting sent to him

when I heard Powell say “ recession” at an emergency presser in March, almost fell over … staff were not allowed to say that word in the building when we put recession call in our forecast in March 2008 … my god, Powell said “depression” on national TV last night

they must be doing Great Depression alt sim for the Federal Reserve officials now … me too, except I’m moving fast toward depression it as my baseline

I feel some comfort knowing that Administration and @WhiteHouseCEA always get the Fed staff forecast (including alt aims) and write up in Tealbook .. Kevin Hassett began on
@federalreserve staff, I’m sure he’s reading it, he better be! and sharing its analysis with the President

really lost it as April data came rolling in

so tired of being angry at the world and at macro men who are mentors PS Cape-Cod man is not one .. talked to @DianeSwonk on my show. asked her if I’m being too pessimistic, no, I’m not. macro women have been tragically right again and again http://macromomblog.com/sahmpodcast/ listen to them

lastly I am SO PROUD of @federalreserve staff and leadership .. . blessed that I left in November (was so hard) and can now share the wisdom in that building with the world. they cannot, I can and am … doubly blessed many people have given me a platform I never expected

Bloomberg reported that even Reinhart and Rogoff thinks that this time is indeed different. Forget the V, the pace of recovery is likely to be very slow.

I don’t know how long it’s going to take us to get back to the 2019 per capita GDP. I would say, looking at it now, five years would seem like a good outcome.

What about the vaccine?

The market rallied on a promising Phase 1 trial of a Moderna vaccine (see CNBC story). Before everyone gets too excited, consider the following:

Best case, we won’t start to see a return to normalcy until Q2 2021. In the interim, the risks of significant damage to the economy are high.

41 thoughts on “Earnings Monitor: Digging in for the long haul”