Back to normal? – Humble Student of the Markets 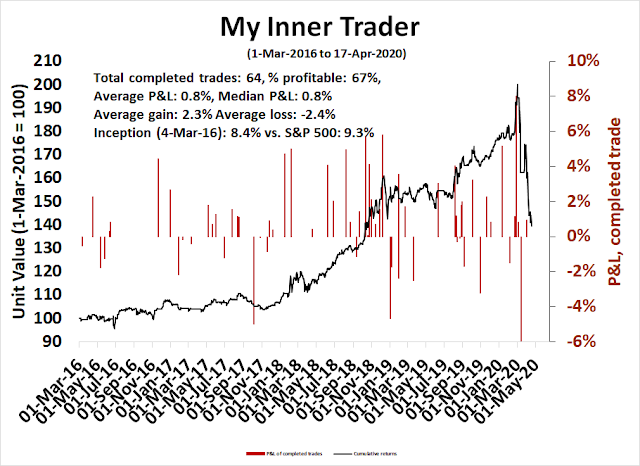 SentimenTrader highlighted a surge in media stories with a “back to normal” theme. He added that “Many of these stories are from the same people calling for another market crash at the bottom in late-March”. 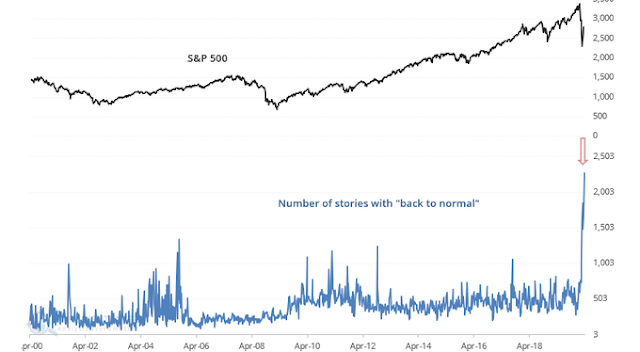 He also observed that hedgers (not HF speculators) are long equity futures up to their eyeballs. Past episodes have been resolved with market rallies. However, I would note that there is a catch. Past signals have either been coincident with market bottoms, or slightly late. 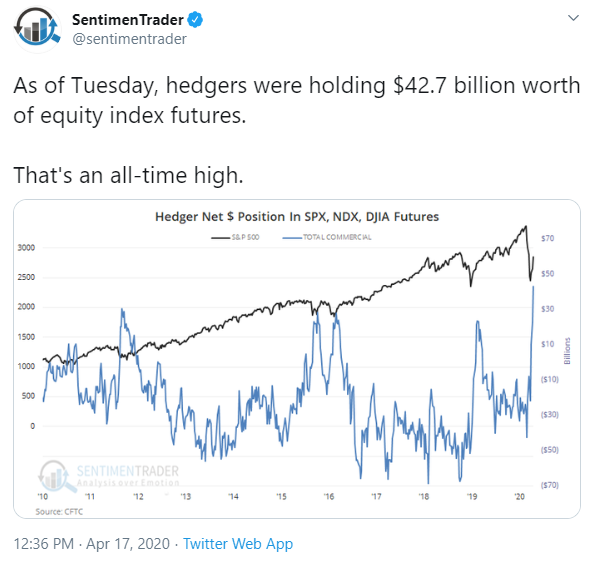 Is the market back to normal, or are we just late in the reflex rally?

The tape has been bullish for the last two weeks, and I would characterize the tone as bullish, with an asterisk. While the short-term action has taken a risk-on quality, there are plenty of intermediate term warnings which have no obvious short-term bearish catalysts.

The S&P 500 has advanced while supported by rising RSI momentum. The stochastic has been unable to recycle from an overbought condition, which could indicate the start of a series of “good overbought” readings that accompany a market grind-up. Arguably, there is a minor negative 5-day RSI divergence, which could be a concern if it develops further. 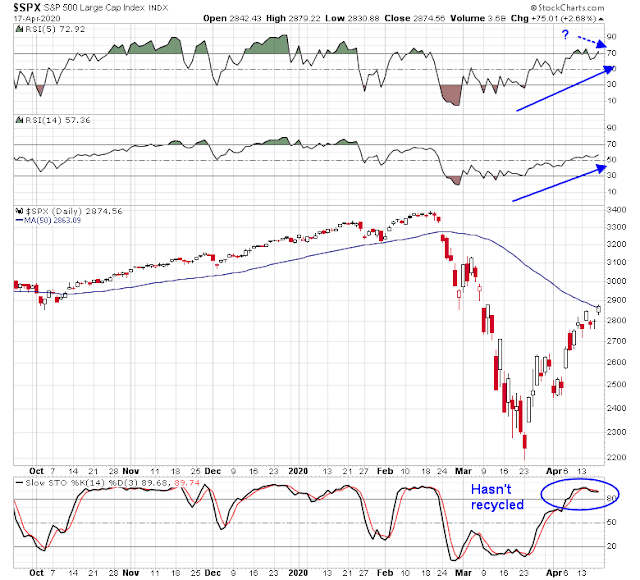 The stock/bond ratio has also broken out of an inverse head and shoulders formation. The measured upside target calls for a 6% gain in the stock/bond ratio, which could foreshadow even a greater gain for stock prices. For example, stocks could rise by 8% and bonds fall by -2% and the ratio could reach its target.

“This will not end well” warnings

On the other hand, the current environment is beset with numerous longer term “this will not end well” warnings that do not have obvious short-term bearish catalysts. One concern is the divergence between stock prices and earnings estimates, especially as Q1 earnings season gets underway. Stock prices have recovered part of their losses, but forward 12-month estimates are skidding badly. Something’s got to give. 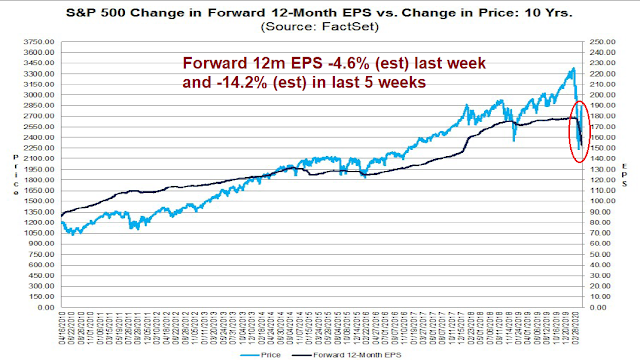 The combination of rising stock prices and falling estimates is bringing the Rule of 20 into play. As a reminder, the Rule of 20 flashes a warning whenever the sum of the market P/E and inflation rate exceeds 20. As of Friday’s close, the market’s forward P/E ratio was 19.0. While I would normally use CPI as a proxy for inflation, CPI is a backward looking number and overstates the inflation rate in a potentially deflationary environment. I substituted the 5-year, 5-year forward inflation rate expectation instead as a more forward looking indication into the Rule of 20 calculation. The result was 20.4, which is above 20 and represents a valuation warning signal for equities. 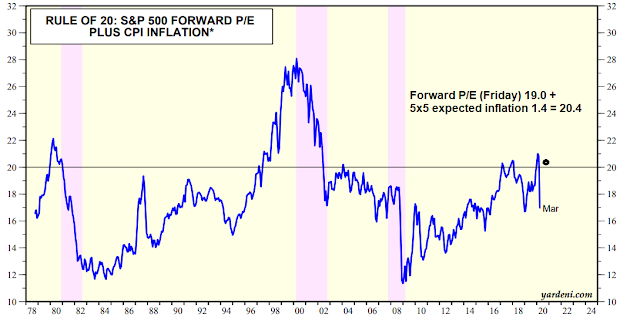 Excessive valuation can take some time to resolve. While this is useful to long-term investors, high valuations are not actionable short-term trading signals. However, there are also some warnings from a technical analysis perspective.

David Keller pointed out that “secular bull markets have seen monthly RSI remain above 40, while secular bears have seen that level broken early on.  The bad news is the first selloff 1929 didn’t break RSI 40 either 🙂  Just a reminder that selloffs can get a lot worse!” 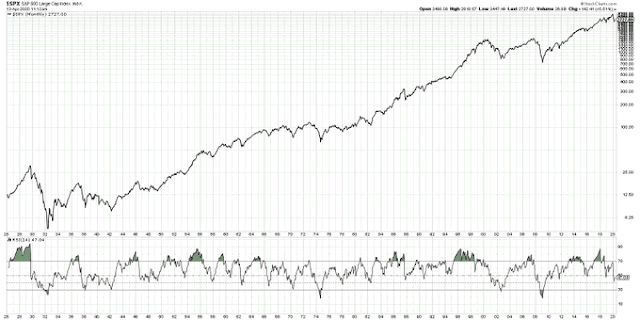 From a shorter term perspective, bad breadth is raising a cautionary flag. The NYSE Advance- Decline Line has not confirmed the recent highs and lags the market. In addition, the price momentum factor (bottom panel) is exhibiting a worrisome pattern of lower highs and lower lows. However, these kinds of negative divergences can last for weeks or even months before they resolve bearishly. 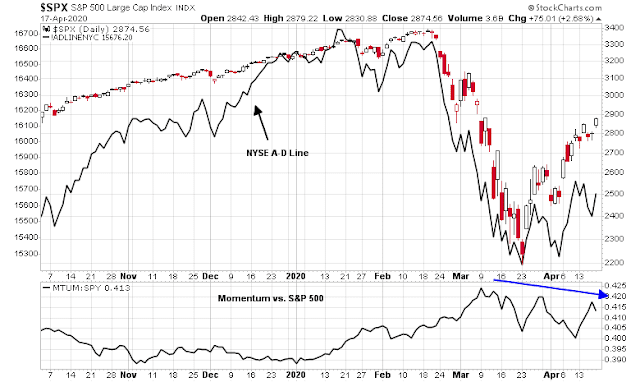 As well, can anyone explain why defensive sectors like consumer staples, utilities, and real estate are in relative uptrends even as the stock markets rose? Defensive stocks are supposed to outperform when the market falls, and lag when the market rises, not the other way around. I fully understand why healthcare stocks are showing relative strength in this environment, but what about the other defensive sectors? 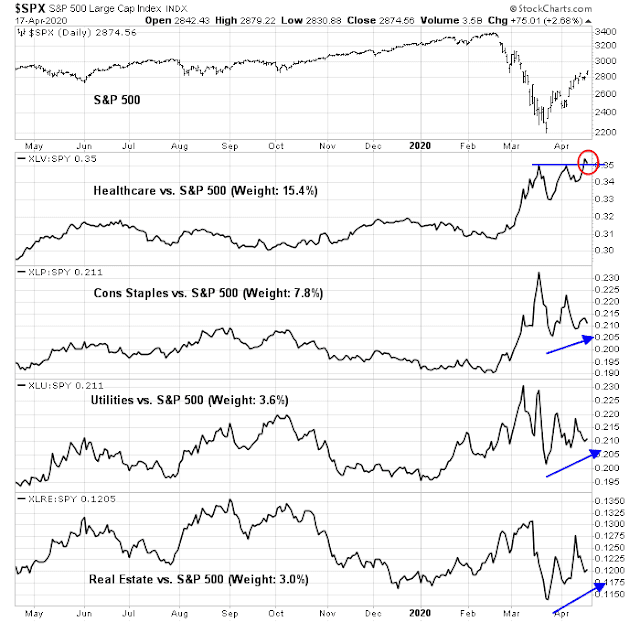 In addition, Jim Bianco pointed out that while NY and NJ infection rates appear to have stabilized, the same cannot be said about the rest of the country. Another shoe may be about to drop, especially if individual state governors decide to relax social distancing guidelines. 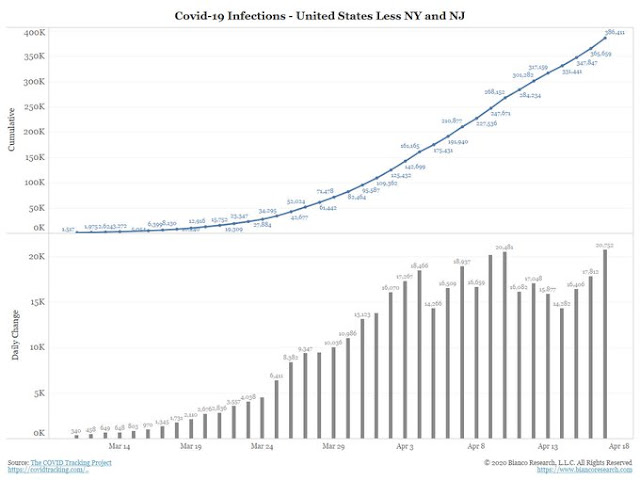 On a knife edge

Looking to the week ahead, the jury is still out on whether the bulls or the bears have the upper hand. As the SPX tests the 50 day moving average (dma) from below, here are some key questions that need to be answered.

The market is overbought, but is the overbought condition bearish, or a signal of a series of “good overbought” conditions that accompany a grind-up advance? 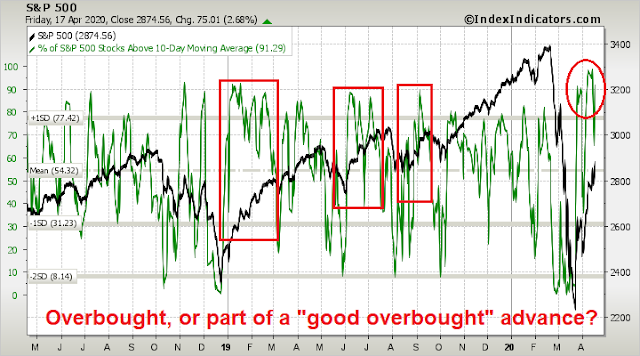 Short-term market internals like equity risk appetite are showing mixed signals. Which way will it turn? 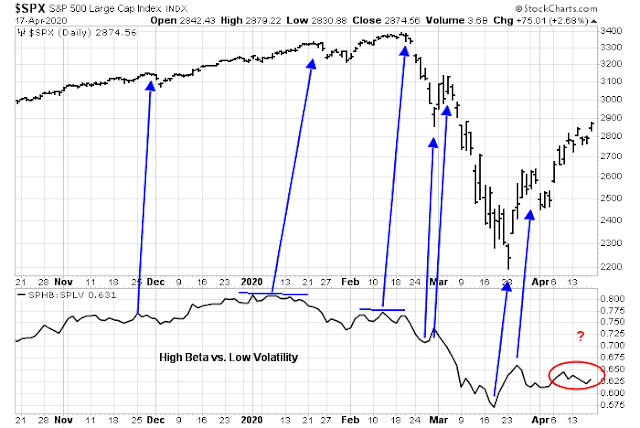 My former Merrill Lynch colleague Fred Meissner suggested that one way to watch for a long-term bullish revival is to monitor the behavior of small cap stocks. Small caps (bottom panel) have usually outperformed as the economy emerges from recession. In fact, fresh bulls are normally marked by changes in leadership, but the old leadership is still intact: US over global stocks, growth over value, and large caps over small caps. 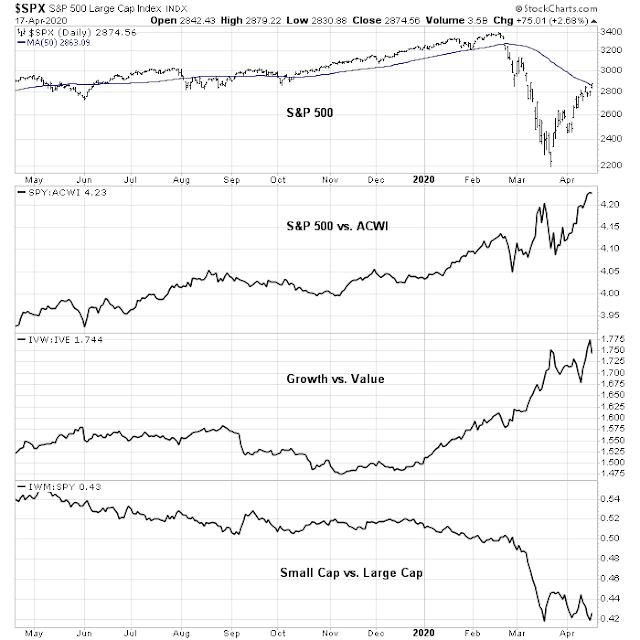 As the index flirts with its 50 dma, my inner trader is listening to the market to determine its outlook. The rally off the March lows was mainly a short covering rally. Short interest is now at multi-month lows. While a low level of short interest could ultimately prove to be bearish, there is no bearish catalyst on the immediate horizon. 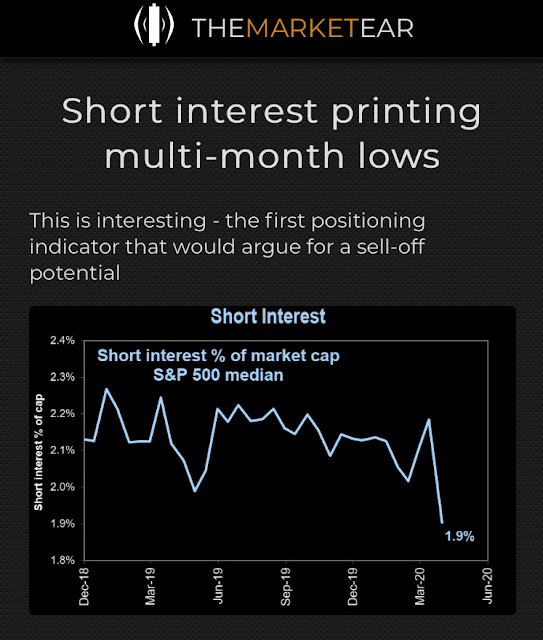 While we cannot know how all traders are positioned, we do know that commodity trading advisors (CTAs) are roughly neutrally positioned. Economic momentum, as measured by ISM, is negative, but price momentum is positive. 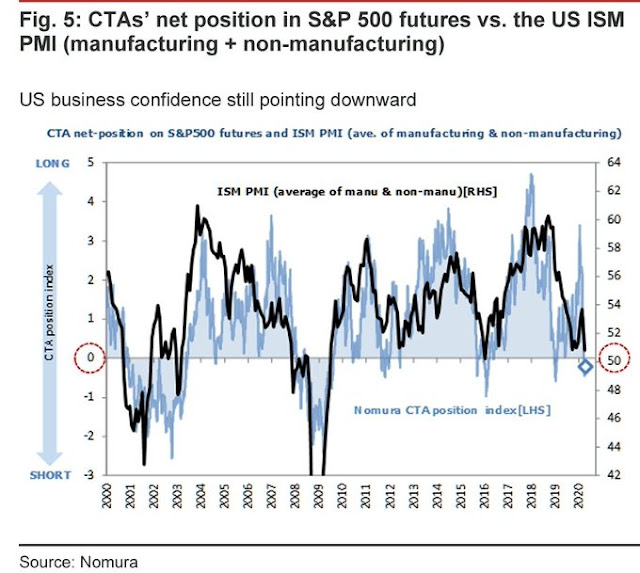 While my inner trader has been short the market, he is waiting for a sign from the market action early next week. If the rally were to continue, he will cover his short positions and step to the sidelines. On the other hand, the market appeared to be topping out last week until the Gilead drug remdesivir news hit the tape late Thursday.

My inner investor remains highly skeptical of this rally. He is in a position of maximum defensiveness and he has selectively sold call options against existing longs.