Making sense of the oil crash – Humble Student of the Markets

Mid-week market update: How should investors interpret the crash in oil prices and its effect on the stock market? The most simplistic way of looking at it is to observe that stock and oil prices have diverged. Either oil has to rally hard, or stocks have to fall down – a lot.

That’s a basic tactical view. While it may be useful for traders, correlation isn’t causation. These gaps in performance can take a lot longer than anyone expects to close.

It certainly isn’t the entire story.

Here is the longer term view. Crude oil and natural prices bottomed ahead of the stock market in the last two cycles, with the exception of natural gas in 2009. This is consistent with the effect of commodity prices leading stocks prices at past bottoms (see The 4 reasons why the market hasn’t see its final lows). 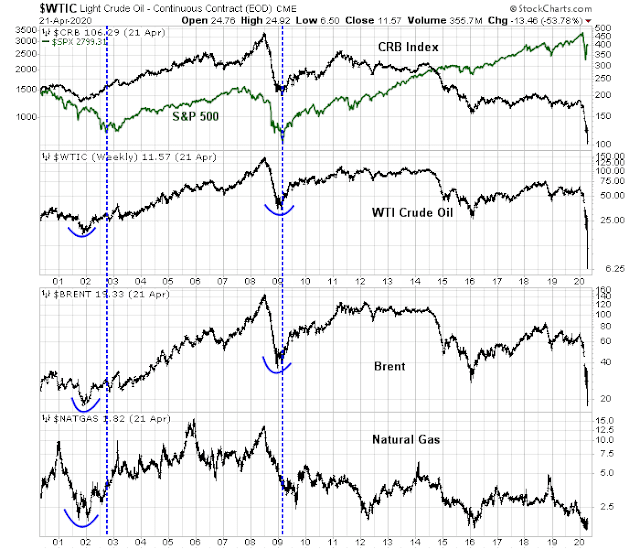 Warren Buffett famously said that when the tide goes out, you can see who has been swimming naked. The tide has certainly gone out for a lot of oil traders. Reuters reported that Singapore oil trader Hin Leong Trading owes $3.85 billion to banks after incurring $800 million in undisclosed losses – and this blow-up occurred before the front month WTI price fell into negative territory this week.

Monday’s negative price for the May crude oil contract was a different matter. It was attributable to a record buildup of inventory, and lack of available storage.

There was much dismissal among market participants that Monday’s negative front month oil price was a technical anomaly, and the May front month contract was thinly traded. But how thin was the May contract? The market went into the open on Monday with an open interest of about 108K contracts. The market skidded by $50 per barrel on Monday, which translates to a loss of $5 billion. To be sure, open interest fell dramatically to about 16K on Tuesday morning, but even at half that figure, that’s a very big loss and some traders would have seen enormous margin calls. Interactive Brokers reported that it is making provisions for losses of $88 million from bad debt stemming from client accounts who were long the crude oil contract that crashed.

Much attention has also been focused on the technical problems with USO. The crude oil ETP is burdened with rolling up its holdings in the front month into the next month, often at substantial cost. Notwithstanding this week’s shenanigans, the NAV of USO has continuously faced these headwinds of rolling forward futures contracts and paying the spread from one month to another. Now another oil ETF has gotten into trouble. This time in Hong Kong. The Samsung GSCI Crude Oil Trust (3175.HK) plunged -46.1% overnight. 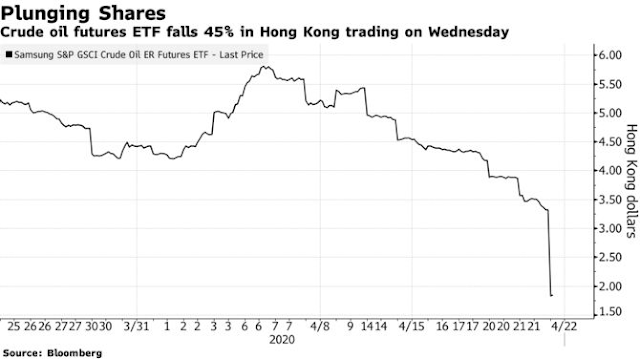 In light of these sudden gargantuan losses, it would be no surprise to see at lease one financial blow up in the coming days. It may be a hedge fund caught off-side on a crude oil trade, a bank that over-lent to the oil patch, or a bank’s trading desk that mismanaged the crude oil hedges it sold to clients. 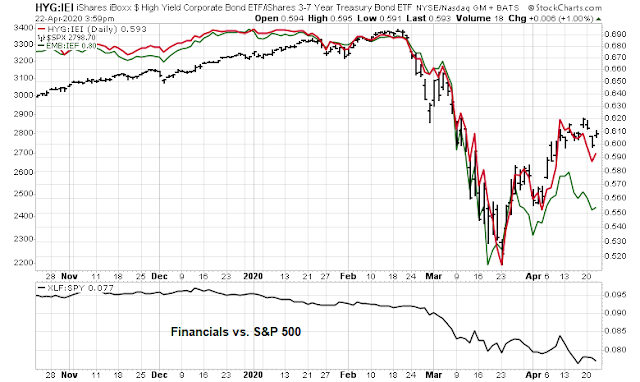 Keep an eye on these indicators.

From a tactical perspective, the S&P 500 has broken down from a rising wedge as it tested overhead resistance at its 50 dma. I interpret this as a sign of bullish exhaustion that will resolve itself with a major downleg in stock prices, or a choppy sideways consolidation.

The pattern of the broken wedge can also be seen in the DJIA, NYSE Composite, and mid-cap stocks. 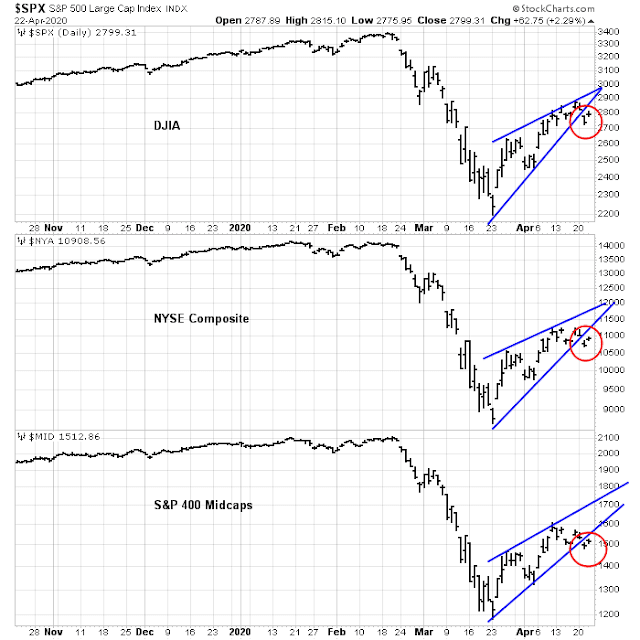 The two exceptions are the NASDAQ 100, and small caps. The NASDAQ 100 had been market leaders and never formed a wedge structure. The weakness earlier this week has changed NASDAQ stocks into a rising channel, which is still constructive.

The story of the small cap Russell 2000 is different, and the performance of this index can yield some clues as to future market direction. Small caps have been weak and they were too weak to form a rising wedge structure. However, their relative performance (bottom panel) has stabilized in the last few weeks. If you squint, you can also see the hints of a bull flag. Should these stocks either stage an upside breakout through the bull flag, or show better relative performance against large caps, it would be a constructive signal that the more likely outcome is a sideways and choppy consolidation, rather than more equity market weakness. 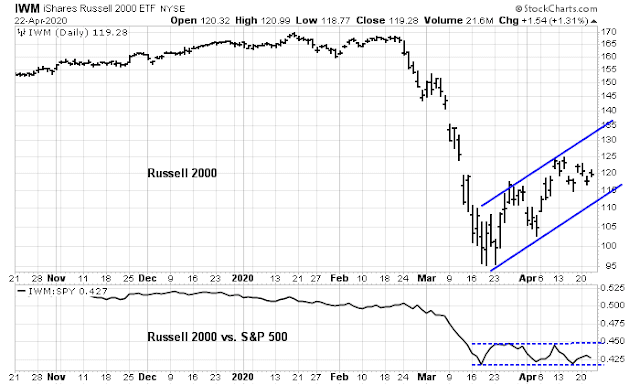 Another indicator to keep an eye on are bond prices. Both IEF (7-10 year Treasuries) and TLT (20+ year Treasures) staged upside breakouts yesterday and pulled back. Should bond prices strengthen to break out again, it would be a bearish sign for stock prices from an inter-market analytical perspective. 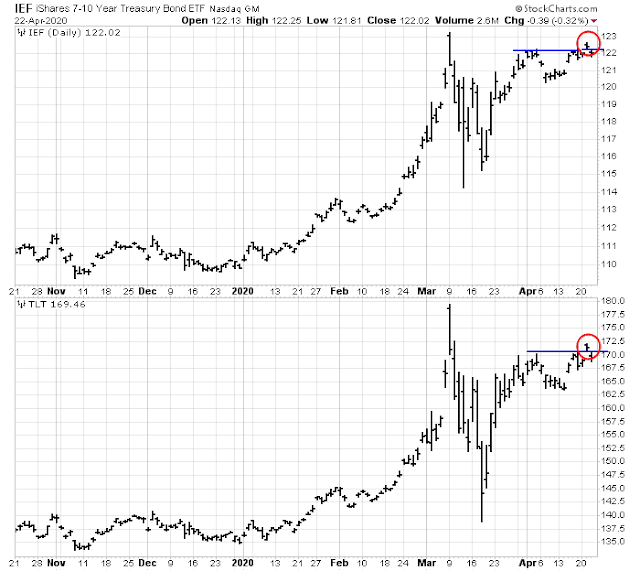 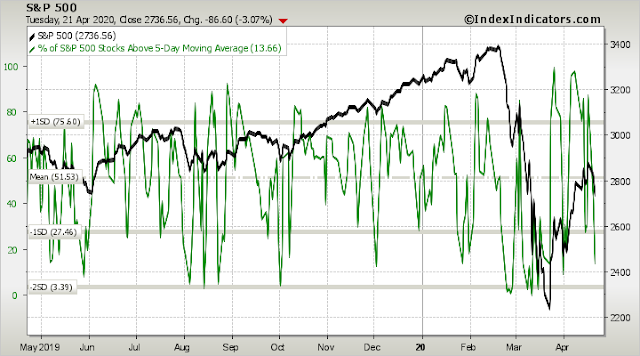 My inner investor is still highly cautious. My inner trader remains bearishly positioned. He is keeping an open mind and monitoring how small caps and bond prices behave in the next few days.

63 thoughts on “Making sense of the oil crash”