For traders: 3 bullish, and 1 cautionary signs – Humble Student of the Markets

The following note is addressed to short-term traders with time horizons of a week or less. I would like to highlight some three bullish, and one cautionary data points.

First, the latest update of the Citi Panic/Euphoria Model is solidly in panic territory. This is contrarian bullish, but recognize that the bullish call is based on an intermediate term time horizon. 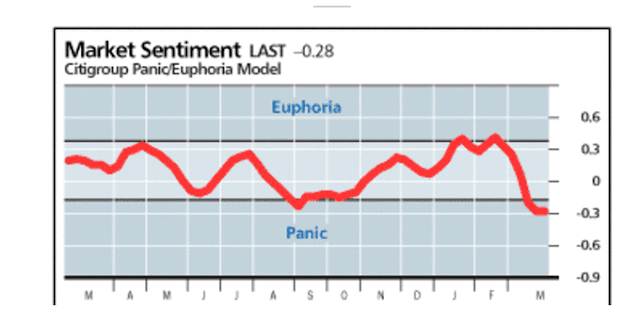 There is an encouraging sign for short-term traders in this model. Luke Kawa pointed out that sentiment had turned suddenly, and momentum is positive. Tobias Levkovitch, the keeper of the Panic/Euphoria Model, found that “Fund managers and institutional investors went from worrying about their personal safety (‘should I buy a gun?’) to having conversations expressing hope a market bottom had formed in the span of five days”.

These comments show that institutional managers are as human as the rest of us. I conclude from this that the rally is a bull trap, but if institutions are ready to hop on the bullish train, there could be further upside in the short run.

My short-term bullishness is supported by the weekly (unscientific) Twitter poll conducted by Callum Thomas of Topdown Charts. I was surprised to see that overall bearishness had risen despite last week’s price rebound. Such levels of bearishness have signaled tradable rallies in the past. 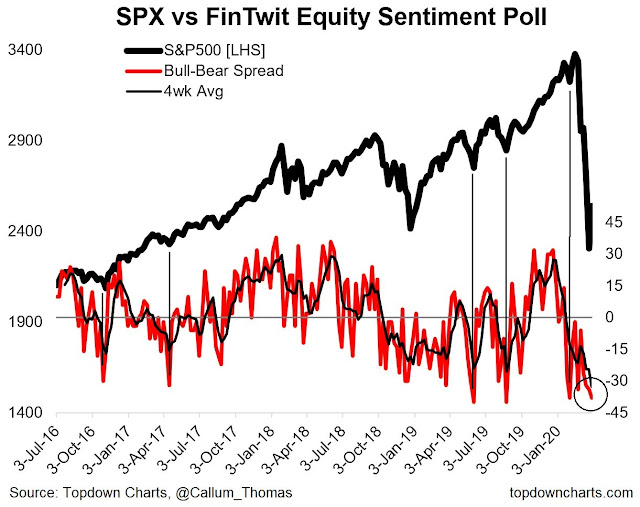 Analysis from Chris Prybal of Schaeffer’s Research confirms my interpretation of a sentiment wash-out. Instead of just examining the put/call ratio, Prybal constructed a hedge ratio based on changes in the put/call ratio and market movement.

Using OCC’s volume data, I’ve developed a “hedging ratio,” derived by taking the daily index/other put/call ratio and dividing that by the equity-only daily put/call ratio. The underlying hypothesis is that there may be a rush to hedge or buy index puts during periods of market turmoil — and so, by comparing the index activity against the equity-only reading, we can shed some new light on the underlying dynamics of the options market. 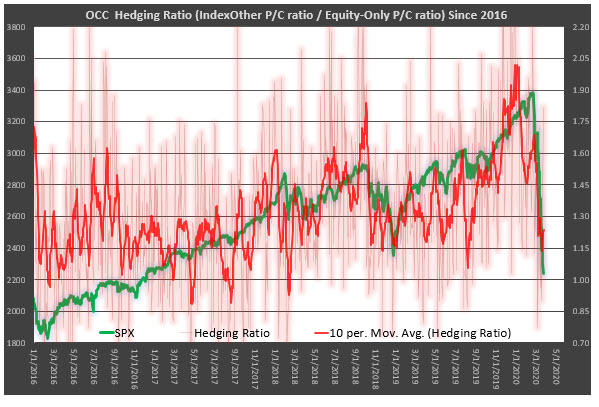 One word of caution

Despite my short-term bullishness, I noticed a worrisome nascent negative divergence today. The stock market had been highly correlated with the strength of EM currencies, as measured by the EM currency ETF CEW. We saw the USD strengthen today, and CEW fall, even as stock prices rise. CEW and SPX had been moving in lockstep in the past month.

What about the Fed’s swap lines that alleviated shortages in the offshore dollar market? FT Alphaville recently featured an article by Wenxi Du of the Booth School at the University of Chicago. She explained that the current episode of offshore USD shortage is different from 2008:

The sudden stop in dollar funding in the last couple of weeks accompanied by crashing asset prices and a sharply appreciating dollar evokes memories of the global financial crisis of 2008. However, there is one key difference: then it was about overleveraged banks, now non-banks are a much bigger part of the story.

Post-crisis regulation made low-margin balance sheet intensive market-making and intermediation activities unattractive to banks due to constraints on leverage. In their place came non-banks, including portfolio investors and nonfinancial corporations (NFCs). They are now playing a much bigger role in the market for short-term dollars. Institutional investors such as life insurers and pension funds from around the world have become the key protagonists, especially in the market for dollar-denominated securities.

A life insurance company from the euro area has obligations to its policyholders in euros, but will typically hold a globally diversified portfolio with a substantial portion being dollar-denominated assets. Hedging the currency risk entails finding a bank that will lend dollars in exchange for euros, with an agreement that the dollars will be repaid for euros at a fixed point in the future, and at a pre-agreed exchange rate – known as an “FX swap”.

NFCs are also enmeshed in global value chains and need short-term dollar funding to finance their working capital. When direct dollar funding sources are not readily available, NFCs can raise dollars in the FX swap markets.

As you recall, the Lehman Crisis blew up because financial institutions refused to lend to each other in the overnight market. The Fed was helpless in the face of the crisis because many of the troubled institutions were non-banks, which could not access the Fed’s discount window. It led to the collapse of WaMu and AIG. This time, it’s playing out again, but in the offshore dollar market. Many of the institutions that lack USD funding are non-banks. While the Fed could and did establish swap lines with local central banks to alleviate shortages, the liquidity transmission mechanism is faulty, and may create further tensions.

My inner trader remains nervously long, and he is watching the offshore USD market, and EM currencies in particular for signs of stress.

41 thoughts on “For traders: 3 bullish, and 1 cautionary signs”