The bear market rally stalls – Humble Student of the Markets

Mid-week market update: The bear market rally appears to have stalled at the first Fibonacci resistance level of 2650. The bulls also failed to stage an upside breakout through the falling trend line. Instead, it broke down through the (dotted) rising trend line, indicating the bears had taken control of the tape.

I should have known better. One of the most reliable indicators has been the ratio of high beta stocks to low volatility stocks. This ratio has signaled most of the turning points in the last few months, and it turned down again late last week. (Warning: No model works forever, and relying on any single indicator is hazardous to your bottom line). 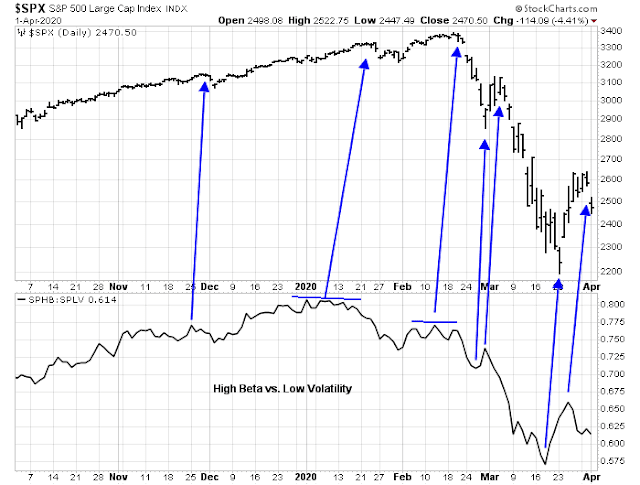 As well, I had expressed concerns about how USD strength was pressuring EM economies. The relative performance of EM bonds and EM currencies have not been reassuring during the recent bear market rally.

Short-term breadth is recycling from an overbought condition, based on last night’s close. Undoubtedly readings will have deteriorated by today’s close, but not enough to move to an oversold reading. 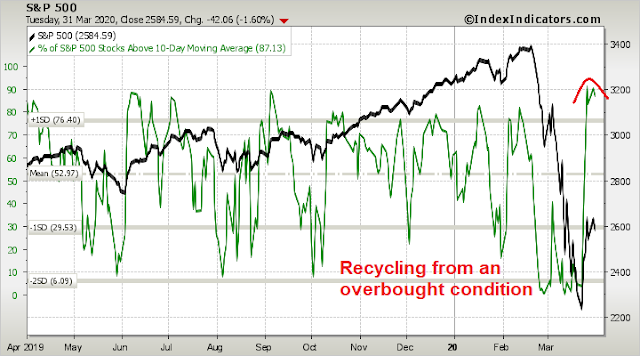 My inner investor is at a position of maximum defensiveness. Subscribers received an email alert this morning that my inner trader had sold his long position and reversed short. A logical downside objective is see the gap at 2260-2350 to be filled.

One key test of market psychology will be tomorrow (Thursday) morning’s release of initial jobless claims. While initial claims are likely to spike even further, watch for revisions to last week’s release, which may surprise with further upward revisions. Watch how the market reacts.