The dawn of a new bull? – Humble Student of the Markets 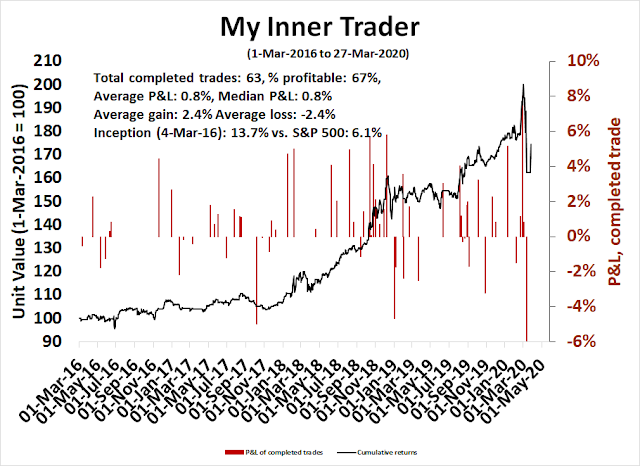 A week ago, I was impatiently waiting for a bear market relief rally (see This is insane! Where’s the bear market rally?).  The market gods heard my pleas, and the market surged 20.3% from intraday trough to peak last week, which is enough to pass the definition of a new bull market.

Does that mean we just entered a new bull market after exiting the fastest bear market in my lifetime? Let’s consider the issues from a variety of perspectives.

Let’s begin with the fundamentals. The price of stocks depend on earnings, earnings, and earnings. FactSet reported that the S&P 500 is trading at a forward P/E of 15.5, which is between its 5-year average of 16.7 and 10-year average of 15.0. 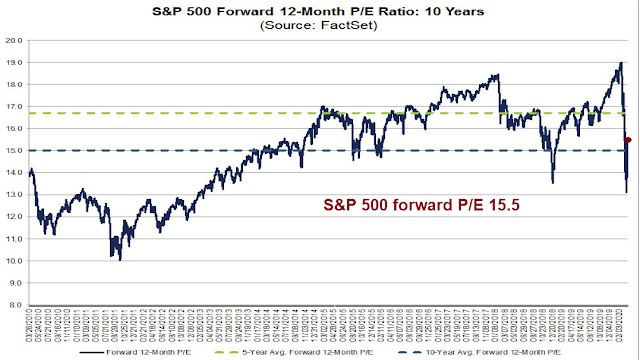 The rise in the forward P/E ratio is attributable to a combination of rising prices and falling forward earnings. Wall Street analysts have finally begun to downgrade EPS estimates, and forward earnings skidded -2.5% in 1 week and a cumulative -4.3% in two weeks. 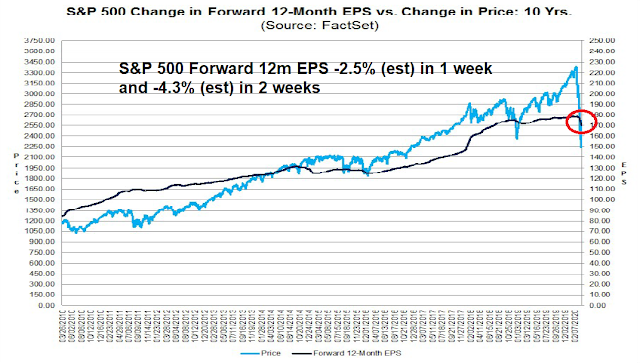 Corporate insiders have shown themselves to be highly valuation sensitive during this downdraft. A concentrated cluster of insider buying appeared just as the market fell, but buying evaporated as the market recovered.

Does that mean that stocks are no longer cheap? Well, sort of. Fathom Consulting recently introduced a valuation model based on cross-asset valuations. It shows that equities are cheap, but they could become even cheaper. 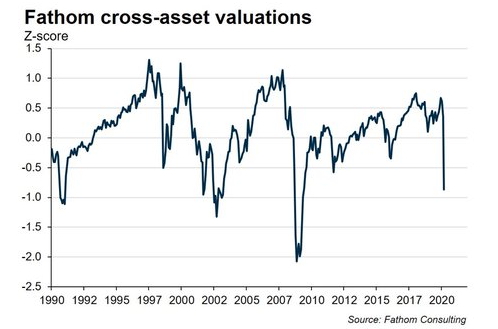 So far, the market hasn’t shown much reaction to macro developments. Nevertheless, the major highlight last week in top-down macro data was initial jobless claims. The chart from the from page of the New York Times is certainly a front page for the history books. Wow! 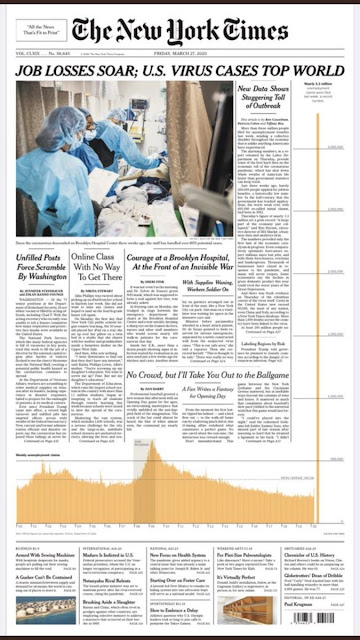 The rise in jobless claims triggers the Sahm Rule, which calls for a recession whenever the unemployment rate jumps (see FRED graph after the NFP report). 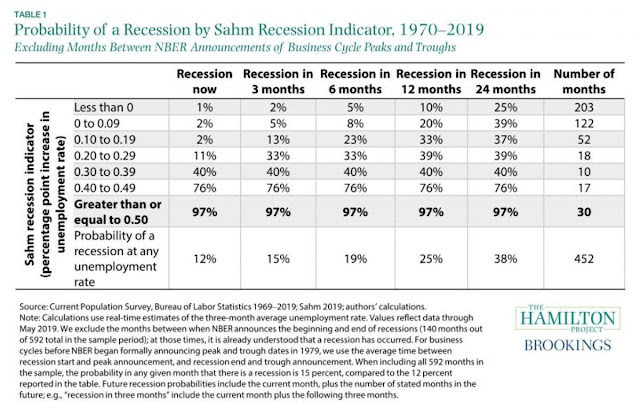 Nautilus Research found that sudden surges in jobless claims has historically been unfriendly to stock prices. Even though the sample size is small (n=7), forward returns are especially bearish on a 3-6 month time horizon. 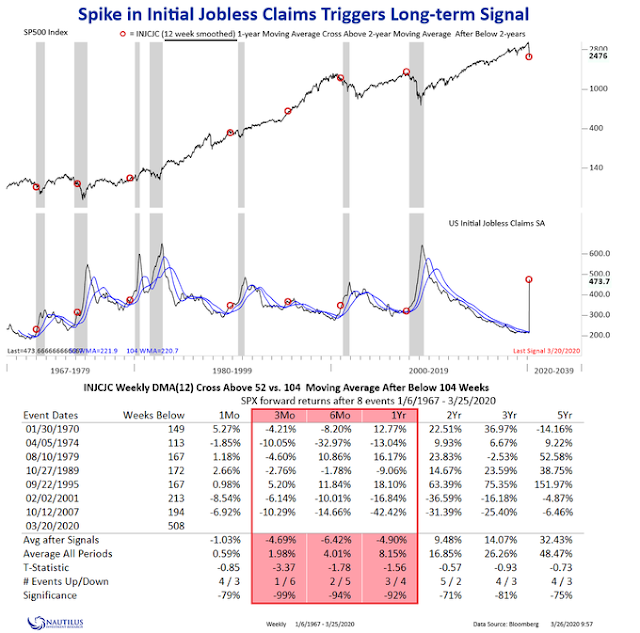 What about the outlook based on technical analysis? The indicators are mixed and confusing. Bullishness and bearishness are in the eyes of the beholder.

Short-term breadth is recycling off an overbought extreme, which argues for weakness early in the week. 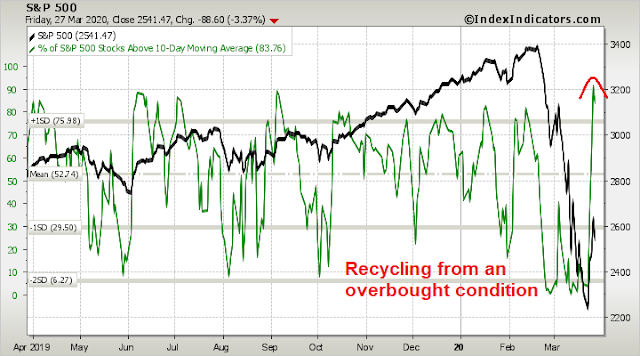 On the other hand, longer term breadth indicators are tracing out a bottoming pattern, indicating that this rally could have some more legs. 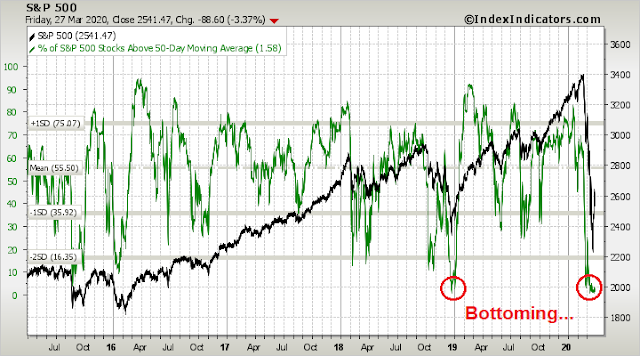 Similarly, SentimenTrader observed that 57% of the S&P 500 have triggered a MACD buy signal, which is a bullish price momentum signal. The key caveat to that buy signal is that it has occurred during bear market rallies in the past. While the market may have been higher in a year’s time, the shorter term outlook may not necessarily be as bullish. 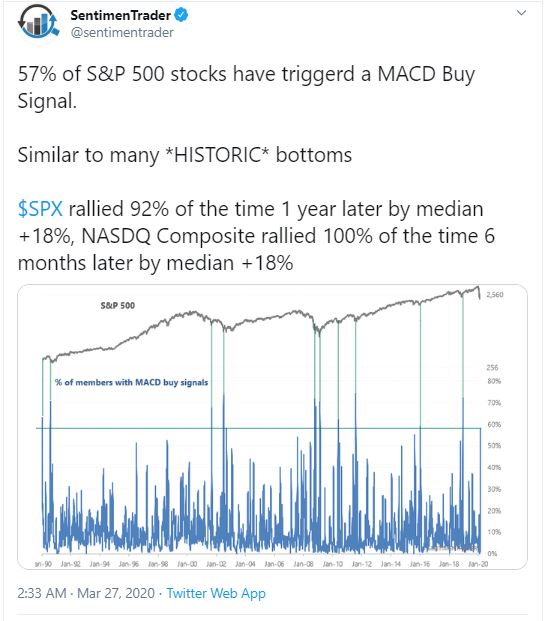 Speaking of price momentum, there is still time for a bullish Zweig Breadth Thrust buy signal to develop. As a reminder, the market has up to 10 trading days after the ZBT Indicator recycles off an oversold reading. Day 1 was last Tuesday. We have another six trading days. Stockcharts is late in updating their ZBT Indicator, so I made my own real-time estimate (bottom panel). Based on current readings, it would only take one more day with a 3%+ price surge to achieve this buy signal. 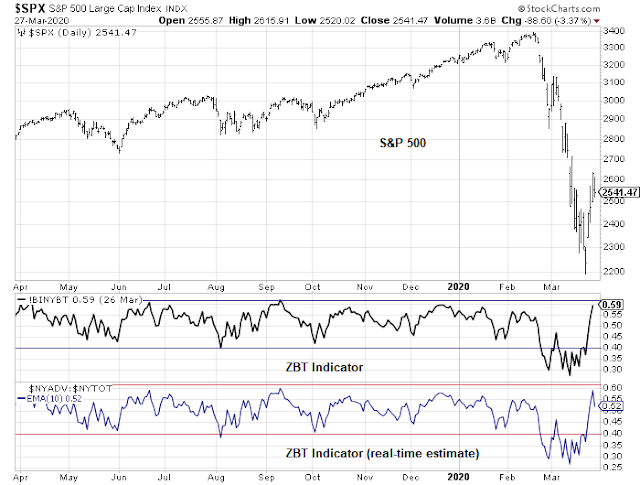 While I am not holding our breathes for a ZBT buy signal, the last one (see A rare “What’s my credit card limit” buy signal, published on January 7, 2019) managed to catch the market surge after the 2018 Christmas Eve bottom.

So where does that leave us? My working hypothesis is this rally is a bear market rally. Bloomberg’s Canadian reporter Luke Kawa gave readers a history lesson last Friday when he compared last week’s market action to 1933:

Even foreigners — well, at least Canadians — learn what happened stateside during the Great Depression, from the duration and magnitude of the human suffering to the policy prescriptions to try to address it. So when financial markets start rattling off superlatives that end with “since 1933,” it’s time to think about what transpired back then and the results we’d like to avoid. Even when it’s tied to good news. On Tuesday, the Dow Jones Industrial Average posted its biggest one-day gain since March 15, 1933. The latter was the first session markets reopened following an extended bank holiday instituted by President Franklin Delano Roosevelt, because so many of them were failing in the midst of a bank run. In the interim, the Emergency Banking Act was passed. That created the Federal Deposit Insurance Corporation, effectively guaranteeing Americans could trust the banks with their savings. Thursday marked the culmination of the biggest three-day rally in the S&P since the period ending April 20 1933 — when FDR took the radical step of de-pegging the U.S. dollar from the gold standard. These were policy actions that succeeded in chopping off the left tail of systemic financial instability, much like the modern-day Fed’s increasing suite of programs to address liquidity and credit risk. In the 1930s, these measures were accompanied by expansive fiscal policy, as is expected today.

If last week’s market volatility was last found during the time of the Great Depression, it is difficult to believe that we have suddenly exited the shortest bear market in history. Daily index price swings of 3% and 5% simply do not occur in bull markets. This kind of market action is the signpost of a bear market. The 2008 bear market experienced numerous brief and sharp rallies of between 9% and 19% within the space of four months.

As well, any declaration of a new bull market has to tempered by the observation that the percentage of stocks above their 50 day moving average is only 1.8%, and above their 200 dma is 6.2%. Arguably, equity market strength could be explained by Fed action to establish dollar swap lines. The initiative sparked a decline in the USD which alleviated a lot of the tensions in the offshore dollar funding market. 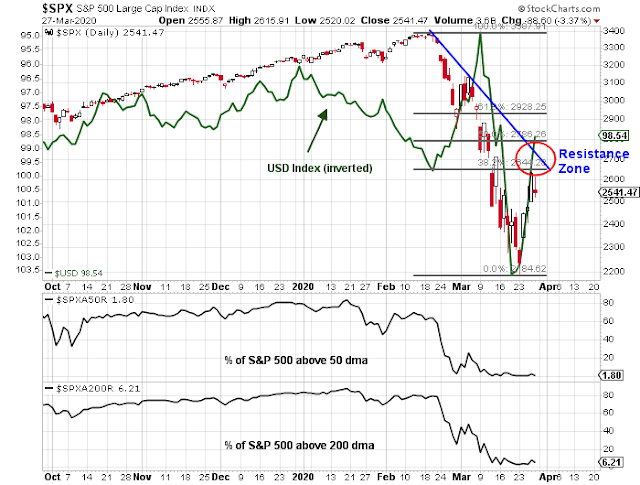 Once the bear market rally subsides, my base case scenario calls for a retest of the lows in April. The bulls may not be able to hold the line, and the retest may not necessarily be successful. There are no guarantees.

My inner investor remains positioned in a maximum defensive posture. My inner trader is long the market, and waiting to see if the likely test of resistance at 2650-2700 is successful.