This is insane! Where’s the bear market rally? – Humble Student of the Markets 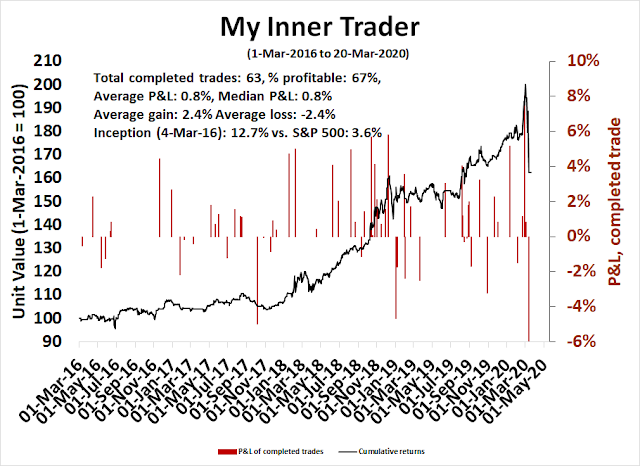 For several weeks, I have been saying that a bear market rally could happen at any time, but the market keeps weakening. One of the challenges for the bulls is to put together two positive days, which they have failed to do. Another is to stage an upside breakout through the declining trend line.

The market closed Friday in the red. One constructive sign that can be found in the above hourly chart is the index closed while testing a support level. Should it stage an upside rally from here, the logical first resistance level is the first Fibonacci retracement at about 2700, with additional resistance at the 50% retracement objective of about 2840.

This is insane! Where’s the bear market rally?

Let’s start with the bad news. There have been reports trickling out from the state level of a tsunami of unemployment claims due to the loss of service jobs from social distancing edicts. Consequently, the Street is now bracing for a moonshot-like surge of initial jobless claims next Thursday. 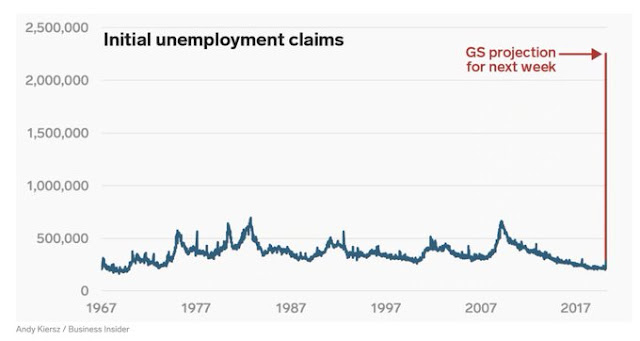 The reverse side of the unemployment coin is new hires. The Upjohn Institute reported that February new hires hit a brick wall: 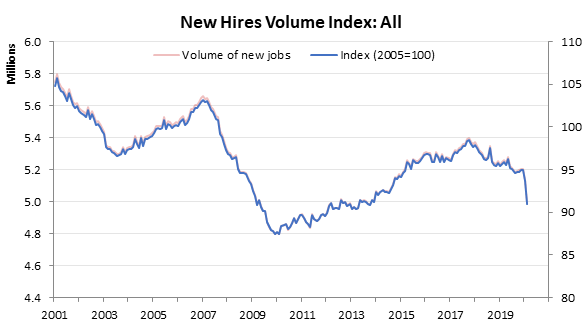 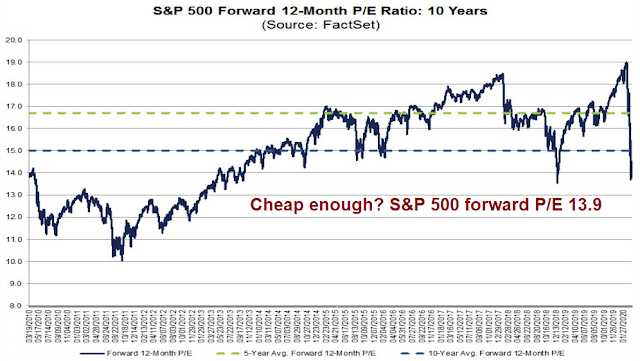 The E in the forward P/E ratio is only beginning to fall. 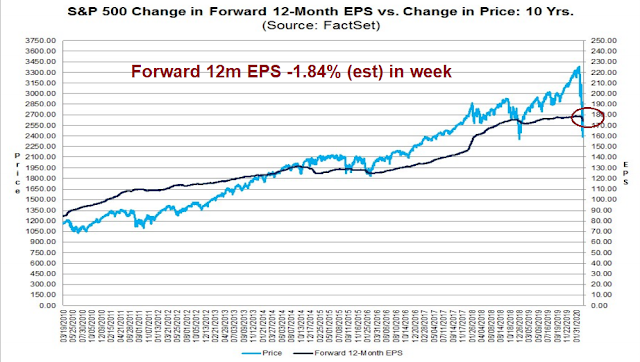 FactSet reported that companies are only just beginning to quantify the effects of COVID-19. Only 213 of 479 S&P 500 companies cited “coronavirus” or “COVID-19” in their quarterly earnings calls.

While many of these 213 companies discussed the current negative impact or the potential future negative impact of the coronavirus on their businesses, 76 companies (36%) stated during their quarterly earnings call that it was too early (or difficult) to quantify the financial impact or were not including any impact from the coronavirus in their guidance for the current quarter or current year. On the other hand, 58 companies (27%) included some impact from the coronavirus in their guidance or modified guidance in some capacity due to the virus.

In other words, expect further wholesale earnings downgrades in the near future.

Here is the good news. The technical internals of the market are improving. As an example, the relative strength of the high beta factor compared to the low volatility factor is bottoming and turning up, indicating improving equity risk appetite. 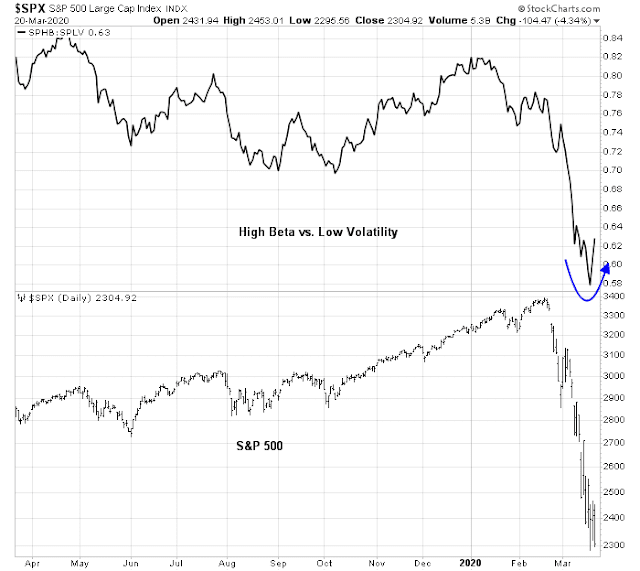 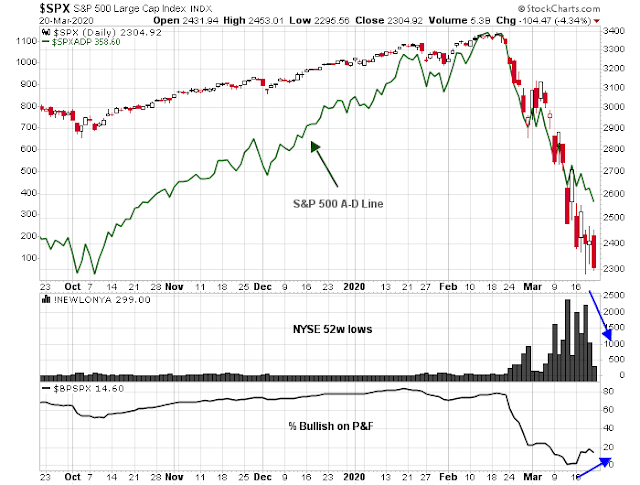 The NASDAQ 100 chart tells a similar story. While the NASDAQ A-D Line is not exhibiting a positive divergence, the other three indicators are showing bullish divergences. 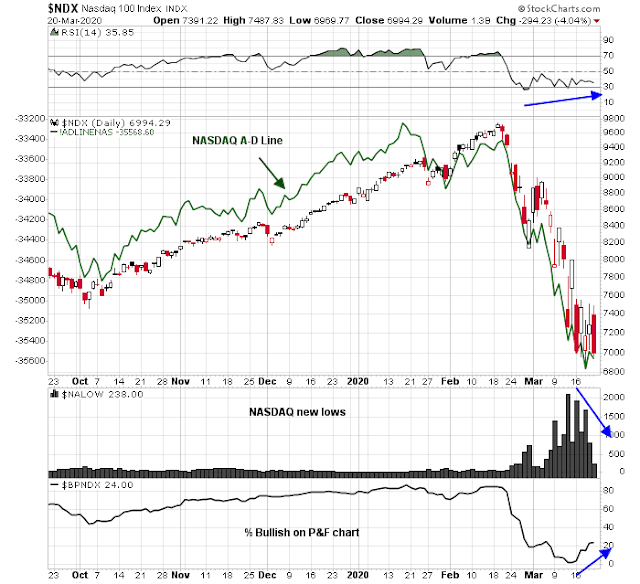 Deutsche Bank’s analysis of hedge fund equity positioning reveals an extreme crowded short position, which is consistent with our thesis of bearish exhaustion. Should any bullish catalyst appear to spark a rally, expect a short covering stampede to rapidly rocket stock prices upward. 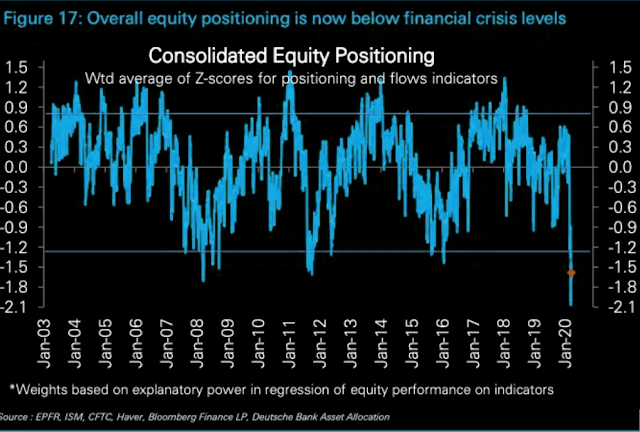 Short run breadth is currently oversold, and the market is ripe for a rally on Monday. Even if the market does rise, let’s just see if the bulls can muster market strength for more than one day. My inner investor is positioned for maximum defensiveness. My inner trader is on the sidelines. He is waiting for signs of a relief rally before jumping in on the long side.

20 thoughts on “This is insane! Where’s the bear market rally?”