The guerrilla war against the PBOC – Humble Student of the Markets

The enemy advances, we retreat
In the wake of the news of the coronavirus infection, the Chinese leadership went into overdrive and made it a Draghi-like “whatever it takes” moment to prevent panic and stabilize markets. When the stock markets opened after the Lunar New Year break, the authorities prohibited short sales, directed large shareholders not to sell their holdings, and the PBOC turned on their firehose of liquidity to support the stock market. Those steps largely succeeded. China’s stock markets stabilized and recovered, and so too the markets of China’s Asian trading partners. 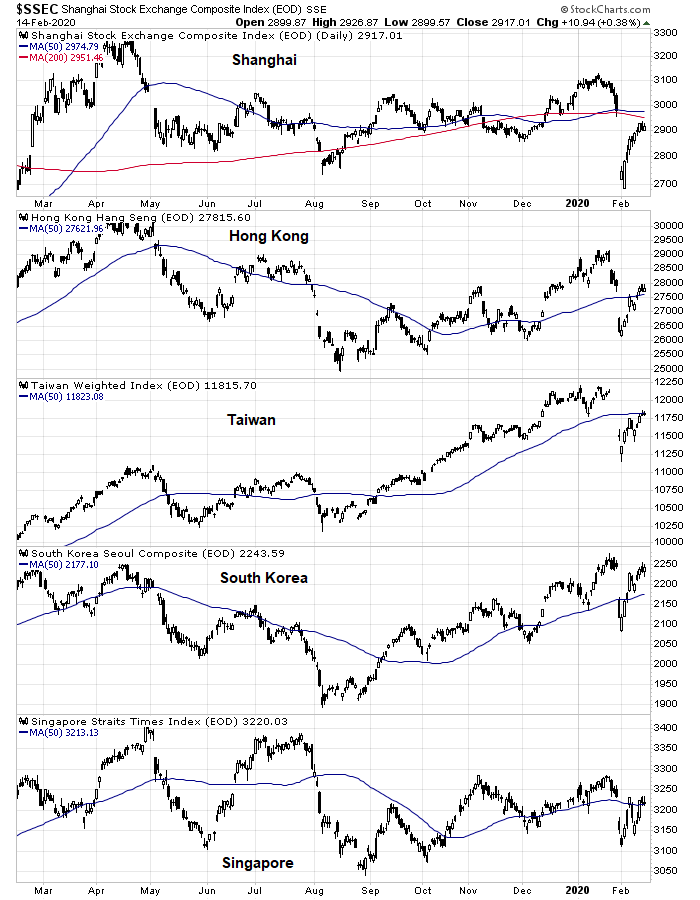 However, there were signs that the market is unimpressed by the steps taken by Beijing to control the outbreak and limit its economic impact. Market participants were conducting a guerrilla campaign against the PBOC by using Mao Zedong’s principles of war. The first principle is “When the enemy advances, we retreat.”

Indeed, when the PBOC flooded the market with liquidity, stock prices went up. But that’s not the entire story.

Mao counseled the guerrilla fighter to “move among the people as a fish swims in the sea.”. No guerrilla campaign against the PBOC would be successful without the broad popular support. In this case, there is widespread skepticism about China’s announcements surrounding its handling of the coronavirus outbreak.

First, doubts have crept in regarding the infection and fatality rate. In a Valentine’s Day Massacre, Beijing replaced senior officials for Wuhan, and Hubei province. This move was accompanied by a re-classification of what it meant to be infected, which led to a huge leap in the figures. If this was a company, the new management effectively took an enormous writedown and attributed the problems to the previous managers. Is it any wonder why there is no trust for Chinese statistics?

The World Health Organization (WHO) has warned the coronavirus spread outside China may be the “tip of the iceberg”. It has declared that the outbreak “holds a very grave threat” to the world. I have been monitoring the growth of infected cases outside of China, and there are few signs that growth is leveling off. 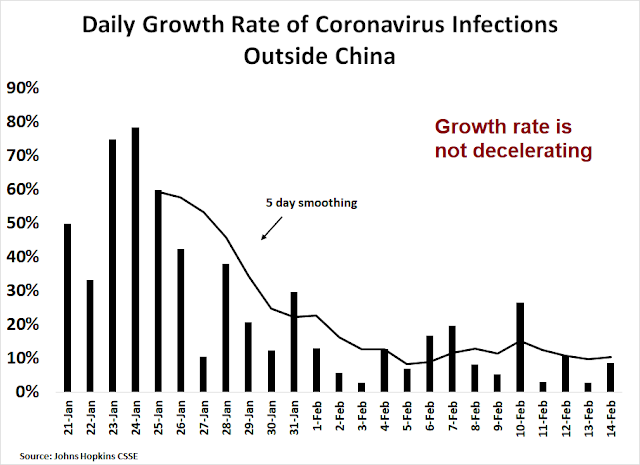 A number of hotspots are appearing outside China, which are signals that the outbreak is not contained globally. The infection aboard Diamond Princess cruise ship docked at Yokohama remains a major concern. Health authorities are also scrambling to identify “patient zero” who spread the virus at a conference in Singapore. As a consequence, the infection spread worldwide, from countries like South Korea to France, where a group of Britons at a ski resort became infected.

The economic effects of the containment efforts are unknown at this point. China was supposed to return to work on February 10, though delays have been announced. Analysts have taken to using offbeat techniques to monitor China. Here is the traffic report for Beijing, current traffic (in orange) is far lighter than the average (light blue).

Here is the traffic report for Shanghai.

…and Shenzhen. I could go on, but you get the idea.

China’s coal usage for power generation, which is a metric of heavy industry activity, tells a similar story of an idled economy. 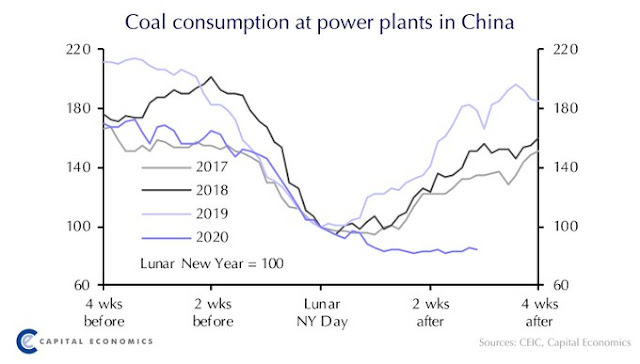 The SCMP reported that job loss is becoming a concern for the authorities. Many migrant workers went home over the Lunar New Year holidays after quitting their jobs, expecting to be hired back afterwards. Now that sales are falling, companies are considering laying off or furloughing permanent employees, and there is little work for freelancers. The coronavirus outbreak puts Beijing in a tough spot, as efforts to contain the virus could result in mass unemployment.

China has not released any updated statistics covering employment, with the unemployment figures for January and February not set to be released until March. In December, the official unemployment rate was 5.2 per cent.

In 2003, which included the severe acute respiratory syndrome (Sars) outbreak, around 8 million people lost their jobs, according to official Chinese data, although real job losses may have been much higher because government data did not cover most migrant workers.

The economics of the slowdown are also concerning from a global perspective. That’s because Chinese factories dominate intermediate goods inputs in many supply chains. 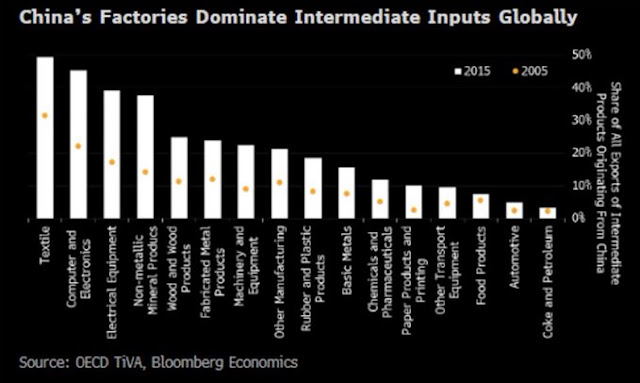 From the ground up, sources indicate that the world’s supply chain is being shaken. Auto manufacturers are warnings that American and European plants are weeks away from shutting down. Nissan, Hyundai, and Kia Motors have already reduced production. Foxconn’s output cuts is threatening Apple’s iPhone sales outlook.

The enemy camps, we harass

Mao’s second principle of war is, “When the enemy camps, we harass”. While the bears have retreated in the face of the PBOC’s tsunami of liquidity that have buoyed stock prices, the markets have shown their skepticism in other ways.

Foreign exchange (FX) markets have also shown their skepticism that all is well in different ways. The offshore yuan (USDCNH) weakened after the news of the outbreak, but did not recover as stock prices did. 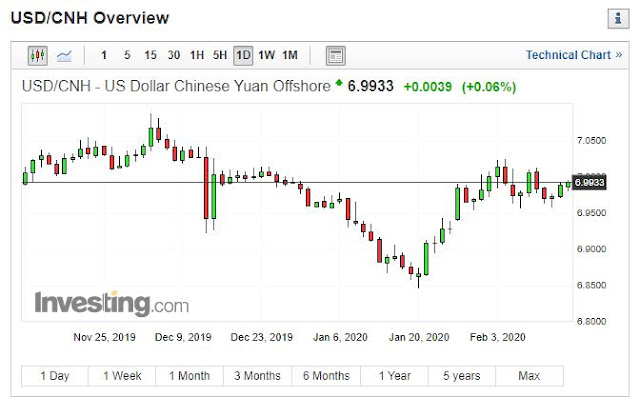 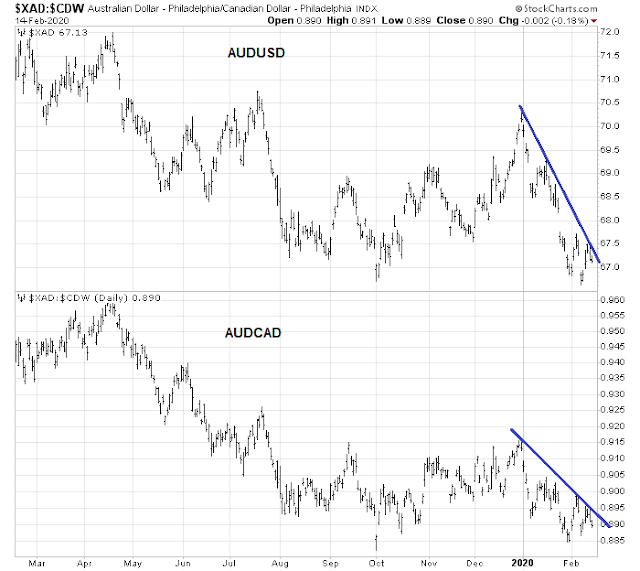 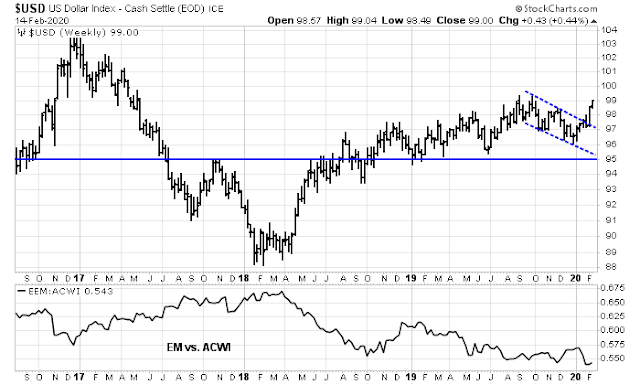 In addition, a strong USD will strain the financial capacity of Chinese property developers who have been financing in USD. The PBOC can supply all the yuan liquidity it wants, but it is far more constrained in supplying USD liquidity to Chinese borrowers. The first test comes in March, when $2.1 billion in offshore notes come due. 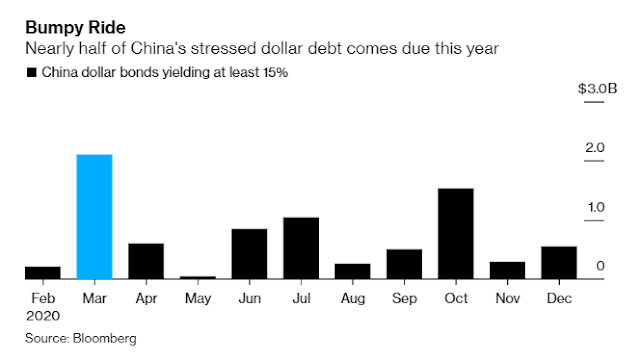 Bloomberg reported that the Street is scrambling to revise down Chinese GDP growth forecasts. The average revised Q1 GDP growth rate is now 3.8%. In a separate article, Bloomberg pointed out that China’s annual stress test of its 30 biggest banks showed a five-fold increases in non-performing loans based on a worst case GDP growth rate of 4.15%. You see the problem here.

Caixin also reported that Chinese banks have been ordered to extend credit to small and medium enterprises (SMEs), who are suffering from a severe cash crunch during this time of stress. These loans would normally not be made as they would not conform to existing landing standards. A survey of 995 SMEs by Tsinghua and Peking University found that 34% say they can survive for only one month based on current cash reserves; one-third said two months; and 17% said three-months.

Who takes the loss if the outbreak doesn’t come under control and these SMEs fail? The PBOC can supply liquidity to the banking system, but it can do nothing for banking system solvency. The performance of financial stocks relative to the Chines market has cratered as a consequence.

When the enemy camps, we harass.

Mao’s two other principles of war are, “When the enemy tires, we attack”; and “When the enemy retreats, we pursue”. It is unclear whether the market’s guerrilla war against the PBOC will ever reach either of those phases, which implies a major defeat of Beijing’s initiative. The market seems to be pricing in the prospect of a sharp V-shaped recovery, but investors should be mindful that the recovery could be slower U-shaped pattern, or even L-shaped.

I can, however, offer some hints of what investors can do in the current environment. The chart below tells the story. Global investors have been piling into US equities as a safe haven because they believe that America is the last refuge of global growth. 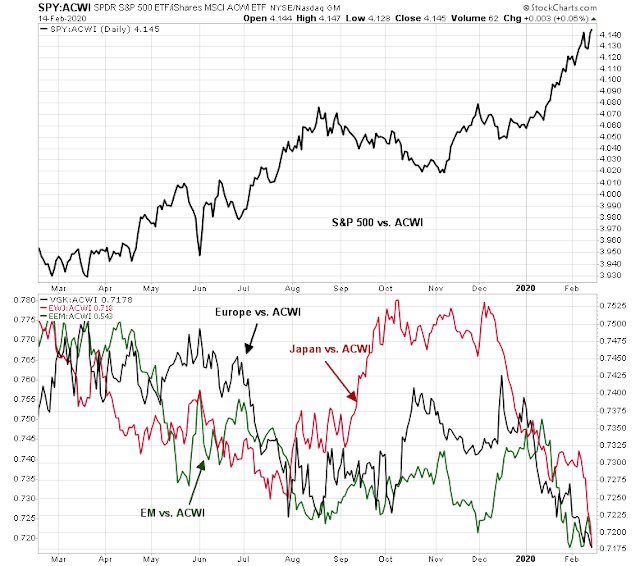 US leadership is narrowing, led by megacaps and NASDAQ (read: FAANG) stocks. Mid and small caps remain in relative downtrends, which is a signal of negative breadth divergence. 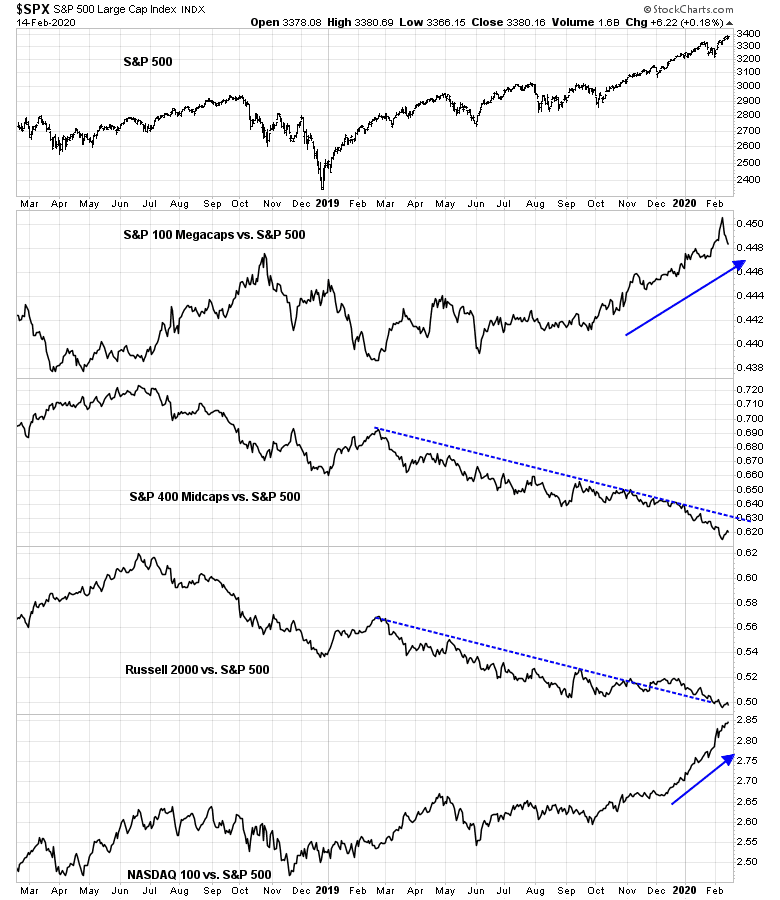 The advance has left US equities highly exposed from a valuation perspective. The Rule of 20 Indicator, which flashes a warning whenever the sum of the market’s forward P/E and CPI inflation rate exceeds 20, is now at a nosebleed reading of 21.6. These levels were last seen during the NASDAQ Bubble and its subsequent deflation. 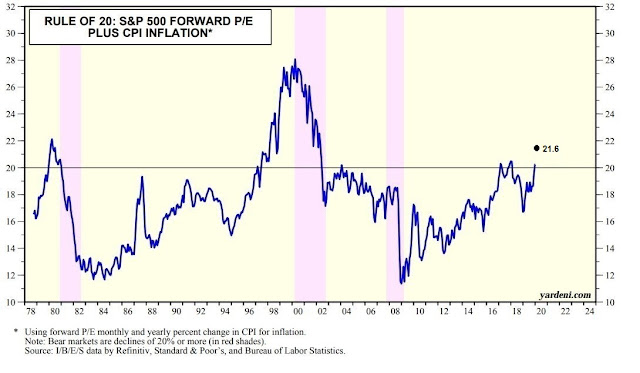 This argues for a contrarian position of long EM, commodities, and commodity producers and short US equities. Aggressive traders could enter into a long and short pairs trade, while more risk-controlled accounts could just overweight and underweight. 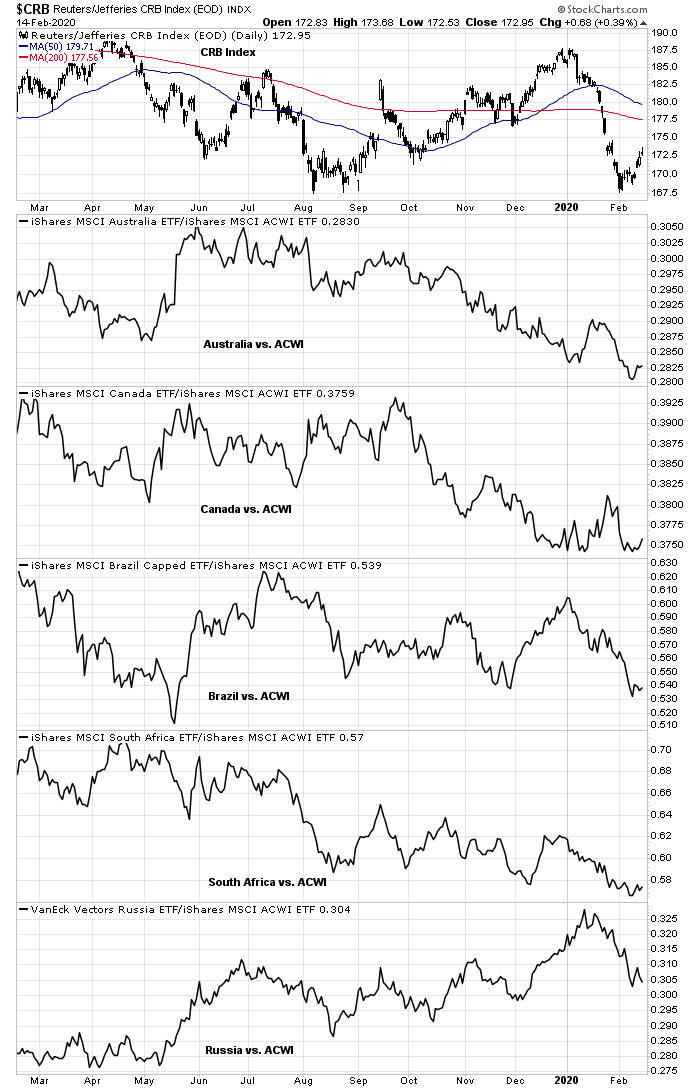 If the bulls are right, and the coronavirus outbreak recedes and comes under control, US equities should begin to underperform as the demand for safe havens, while cyclically sensitive EM and commodities would rally. On the other hand, if the outbreak were to spiral out of control and global growth collapses, then US equities would correct, but there is likely less downside risk in EM and commodity exposure because they have already fallen substantially.

Investors can win either way.

Publication note: I normally publish a weekly tactical trading comment on Sunday. In light of the long weekend, the trading comment will be published on Monday morning. That way I can react to any potential new developments in the coronavirus outbreak.

3 thoughts on “The guerrilla war against the PBOC”