A 2020 commodity review – Humble Student of the Markets 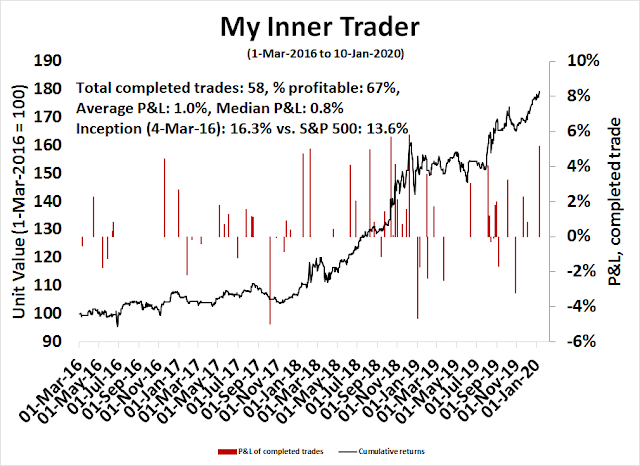 A commodity bull market ahead?

It is time for a commodity review, which is timely for two reasons. First, gold bulls got excited when prices had broken out of a multi-year base last summer. They then paused and traced out a bull flag. Gold then staged an upside breakout out of the bull flag, and rose to test resistance as geopolitical tensions spiked. More importantly, the inflation expectations ETF (RINF) staged an upside breakout out of a downtrend. 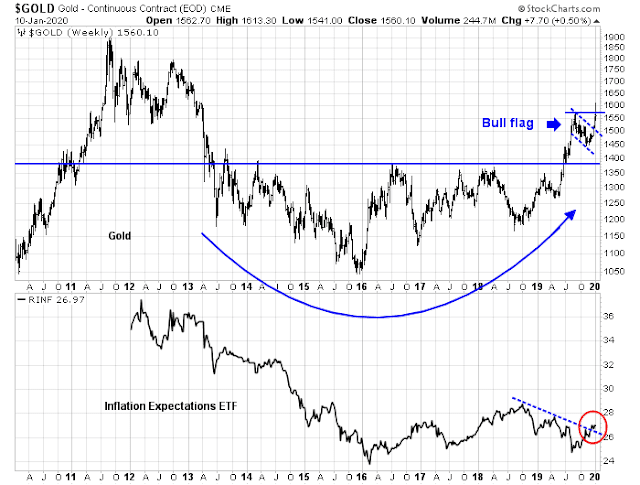 The second reason is China, which has been a strong source of demand for commodities. Bloomberg reported that the market is getting excited about the prospect of a Phase One trade deal and a rebound in Chinese growth.

Investors are snapping up Chinese financial assets, encouraged by progress on trade and signs that the world’s second-largest economy may be stabilizing.

Improving confidence helped stoke a 0.5% rally in the yuan Tuesday, pushing it to its strongest level since early August. The currency punched past the key 6.95-per-dollar level, and traded on the strong side of its 200-day moving average for the first time since May. The CSI 300 Index of stocks closed at an almost two-year high as volume jumped.

The return of risk appetite in China comes amid growing optimism that Beijing and Washington may sign an initial deal on trade as soon as next week. Momentum is also improving in China’s economy, with recent data showing a recovery in the nation’s manufacturing sector continued in December.

“Risk sentiment is strong onshore,” said Tommy Xie, an economist at Oversea-Chinese Banking Corp. “There are signs of bottoming out in the economy and a more flexible monetary policy.”

Indeed, the offshore yuan has been steadily strengthening as news that a Chinese delegation is expected to visit Washington January 13-15 to sign the trade deal. 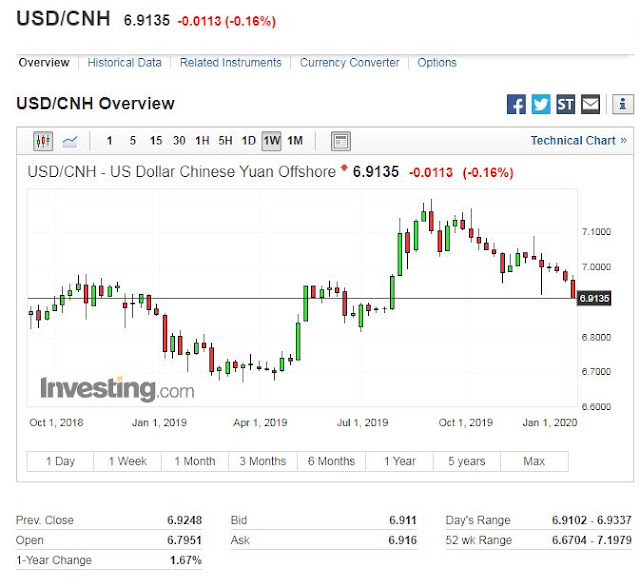 Is it time to turn bullish on gold, and commodities?

I conclude that the long-term outlook for commodity prices is constructively bullish, but current conditions argue for a bullish setup, as a secular bull market has not been signaled yet. In the short run, commodity prices are enjoying a fundamental tailwind of a Chinese cyclical revival. The only exception is gold, which is extended and poised for a pullback.

Let us begin with a technical review of commodity prices. The CRB Index has been basing and range bound since mid-2015. While prices are rising, they have not staged an upside breakout yet. However, the smoothed Pring Commodity New High Indicator is performing better than the CRB, indicating positive breadth and underlying strength. 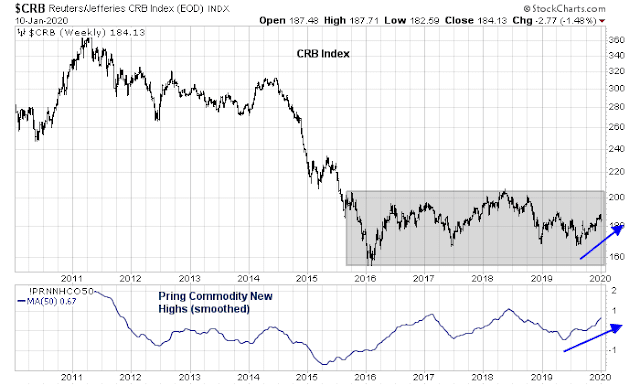 A review of the precious metals and cyclically sensitive metals, as well as lumber, tells a constructive bullish story. Gold prices have staged an upside breakout from a multi-year base. The other metals, namely silver, and economically sensitive copper and platinum, are still basing. Copper prices are still consolidating, after failing to rise when it encountered a rising trend line. Lumber prices are holding an upside breakout. Overall, the outlook for metals and other cyclical commodities is bullish. 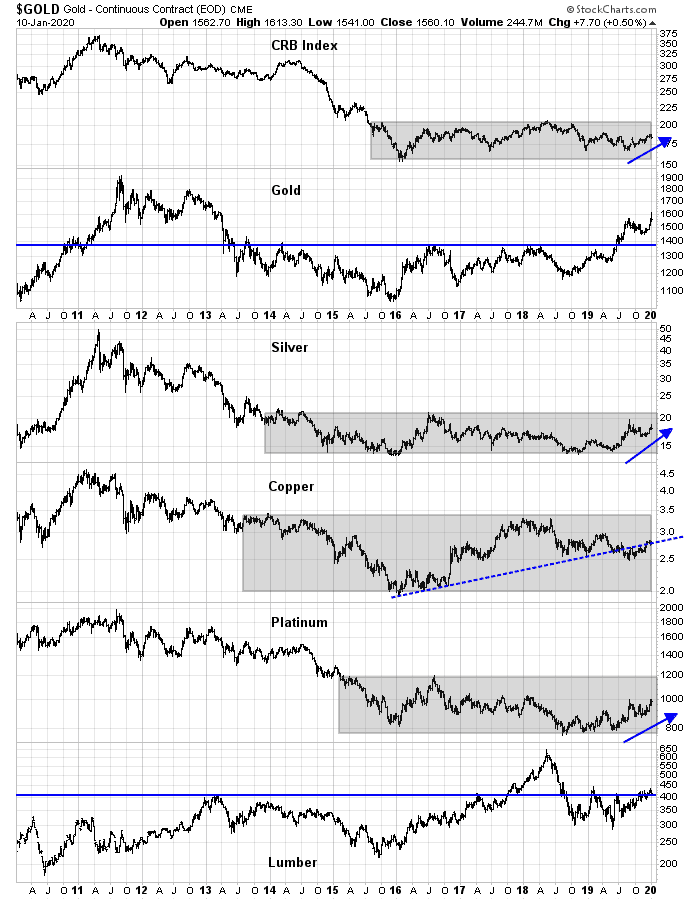 The CRB Index is heavily weighted in the energy complex to facilitate its use as a trading vehicle. Oil prices were unable to break above resistance at about $65 for WTI and $75 for Brent despite a flare-up in Middle East tensions. Natural gas prices are weak. Energy prices have been a drag on the CRB, as evidenced by the weakness in the crude oil to CRB ratio in the past year. 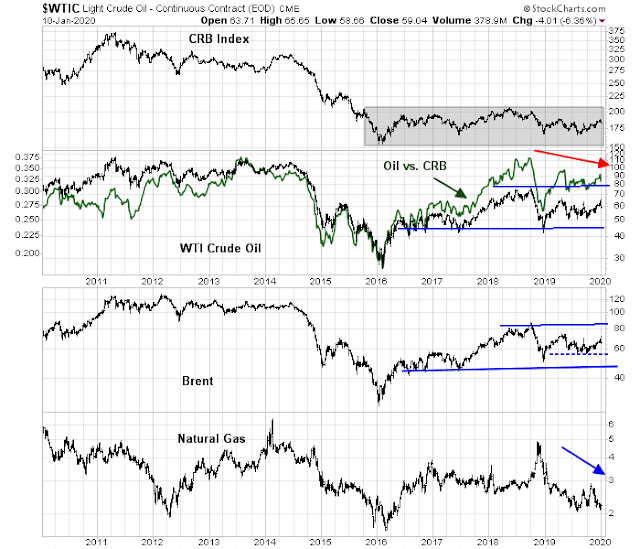 The technical structure of the agricultural commodities can be best described as constructive. Agricultural prices have been basing and range bound for the last few years. Prices are trending upwards in the short run, but none have staged upside breakouts. 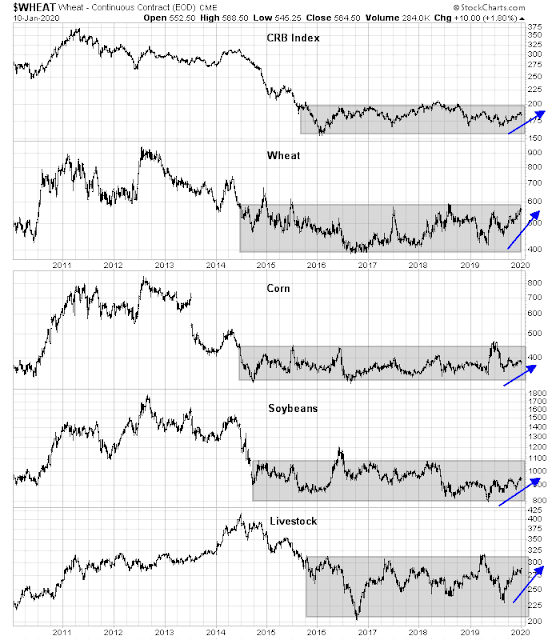 However, I would like to point out a possible short-term bullish catalyst for livestock prices due to the China demand from the decimation of their pig herd from African swine flu. 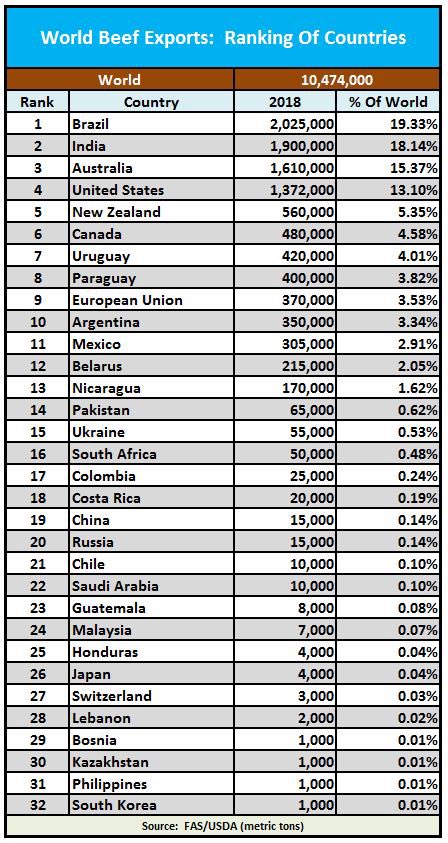 From a technical perspective, the outlook for commodity prices can described as constructive, but it may be too early to become wildly bullish until we see definitive signs of upside breakouts. This is only a setup for a long-term bull. However, gold, which has been the leader of the CRB, appears to be due for a pullback. Commitment of Traders data (via Hedgopia) shows that non-commercial traders retreated slightly from a record net long position, and receding geopolitical tensions are likely to be the catalyst for a correction. 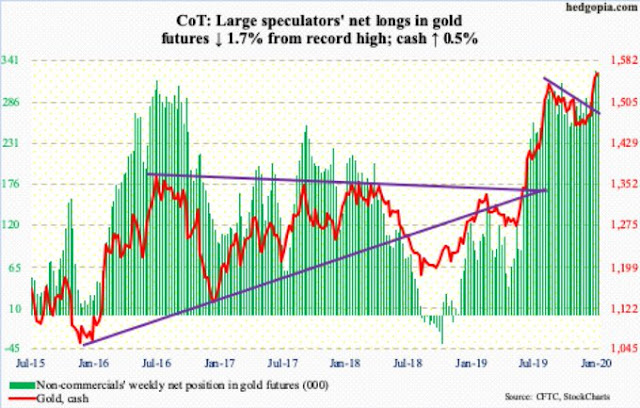 China: A source of rising demand

Over the next few months, signs of a revival in Chinese growth may provide the bullish underpinnings for higher commodity prices.

Market based signals are pointing to a Chinese cyclical revival. The performance of Chinese material stocks relative to global materials have spiked (top panel), while the relative performance of US and European energy and materials form sideways consolidation patterns. 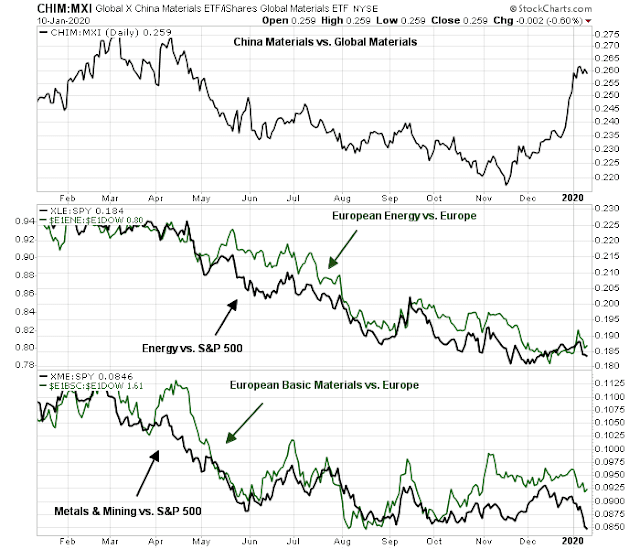 Moreover, the strong relative performance of the cyclically sensitive Chinese real estate stocks and financial stocks are signaling that Beijing is back stimulating the economy. 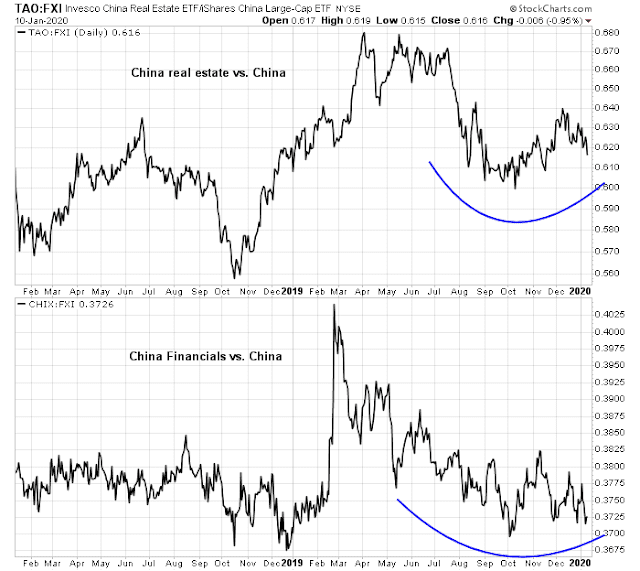 A revival in the copper/gold and the platinum/gold ratios, which are cyclical indicators, are also signaling a new upleg in commodity demand.

The Chinese stock market is also showing signs of improving relative strength and global leadership. China should be a source of cyclical leadership, at least for the next 2-3 months. 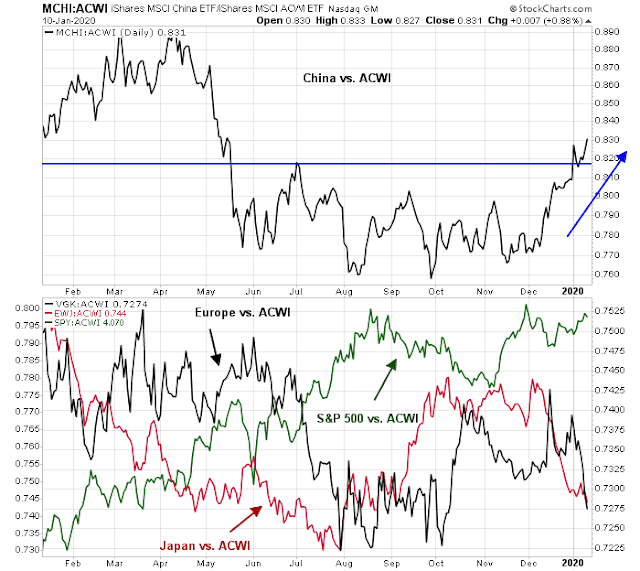 Lastly, John Authers at Bloomberg also highlighted analysis from CrossBorder Capital which concluded that global financial systems are experiencing a surge in liquidity. While much of the surge is attributable to the Federal Reserve, the PBOC has also joined the party, which is likely to boost Chinese economic growth over the near term. 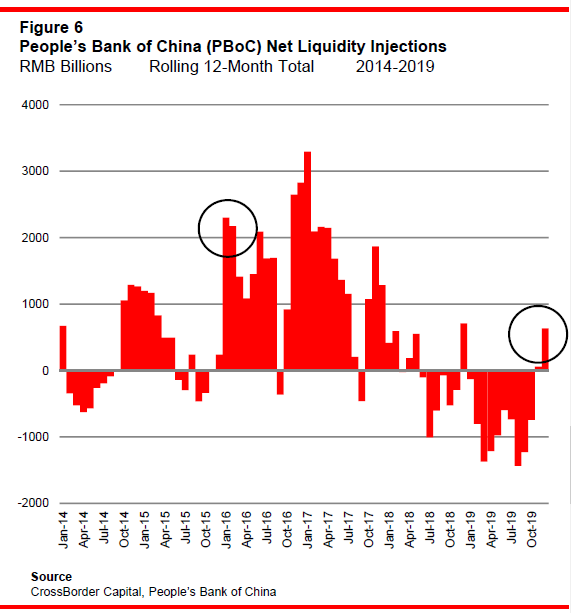 In conclusion, the long-term outlook for commodity prices is constructively bullish, but current conditions argue for a bullish setup, as a secular bull market has not been signaled yet. In the short run, commodity prices are enjoying a fundamental tailwind of a Chinese cyclical revival. The only exception is gold, which is extended and poised for a pullback.

I have been in the habit of writing a weekend publication consisting of a relatively long research piece combined with a tactical trading commentary, which has at times been very long. As an experiment, I am splitting the two up. Please let me know if you prefer the format of two shorter posts, or a combined longer publication.