Buy the cannons, sell the trumpets? – Humble Student of the Markets

Mid-week market update: The financier Nathan Rothschild was said to have coined the phrase, “Buy on the sound of cannons, sell on the sound of trumpets”. After the New York market closed last night, the news flashed across the wire that Iran had launched missile strikes at Iraqi bases housing American and Coalition military personnel. Equity futures cratered as much as -1.6%, but by the time the dust settled, the market had opened in the green on Wednesday.

Have we had a cannons and trumpets moment?

For some perspective, Ryan Detrick highlighted analysis from Sam Stovall that documented the equity market’s reaction to major geopolitical shocks since Pearl Harbor. The initial reaction and drawdown averaged -5%. If we were to exclude the events that led to major US military commitments (Second World War, Korea, Vietnam, Gulf War I, and 9/11), the average drawdown falls to -3.0%, with a median of -1.8%. 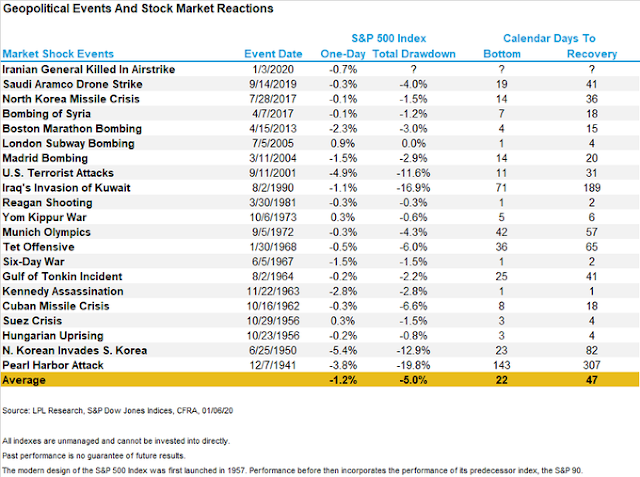 For readers who have been writing me about the Apocalyptic nature of the Iran developments, what are you so worried about?

As the details of the Iranian missile attacks cross the tape and the market assumed a knee jerk risk-off reaction, something about the account started to sound fishy. A lot of the story wasn’t adding up.

The entire episode sounded like a form of elaborate theatre performed to show that Tehran had acted tough and retaliated against the killing of Soleimani, but it was not seeking escalation. In that case, it was time to buy the sound of cannons.

I turned out to be right. Subsequent events showed that both sides were signaling a desire to de-escalate, as evidenced by the real-time Twitter feed. First, Iran’s foreign minister tweeted that the missile strikes represented a form of proportionate retaliation, and there would be no further action if the US does not respond. 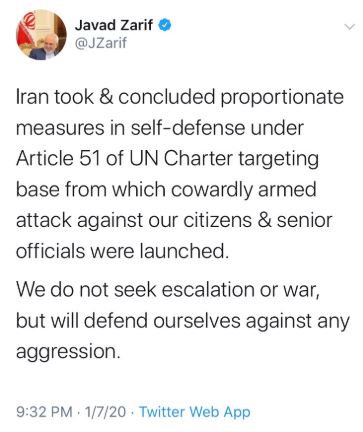 This was followed by Trump’s “all is well” tweet, which was an indication that he got the message. 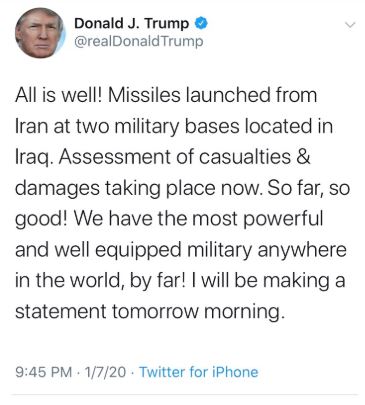 The Iraqi prime minister further issued a statement that Iran had warned Baghdad that the missiles were on their way. Moreover, the LA Times reported that US military forces were tracking the Iranian missiles, and had time to take shelter.

Iran launched 15 missiles, of which 11 hit their targets and four failed in flight, according to a U.S. defense official, who said there were no reports of U.S. casualties in the attack.

Ten of the missiles hit the sprawling Asad Air Base in Iraq’s western Anbar province. U.S. radar was able to track the missiles in flight and, as a result, personnel at the base were able to take cover. The U.S. made no effort to intercept the missiles, the official said.

Subsequent to those reports, President Trump addressed the nation today and stated that Iran appears to be standing down, but he would hit Iran with “punishing economic sanctions” after the missile attacks. In other words, the attack and corresponding US reaction was part of an elaborate dance and theatre for public consumption.

So much for World War III. There will be no short-term military escalation into war, at least for now.

The sound of trumpets?

As a consequence of these developments, the SPX rallied to an intra-day all-time highs while exhibiting negative RSI divergences. Historically, such divergences have been early warning signs of a market top, but they do not necessarily market an immediate top. 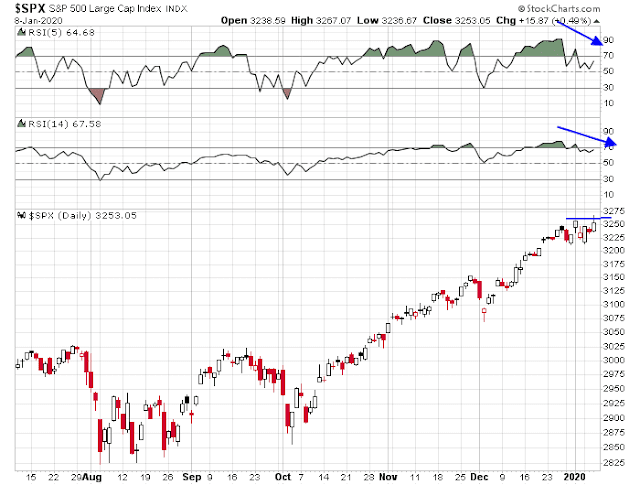 Was that the sound of trumpets I heard? While I remain short-term bullish, the risk/reward equation is becoming less favorable for the bulls. Sentiment remains excessively bullish, which is contrarian bearish. A Bloomberg article documented how the short interest in SPY had fallen to the lowest level in two years. 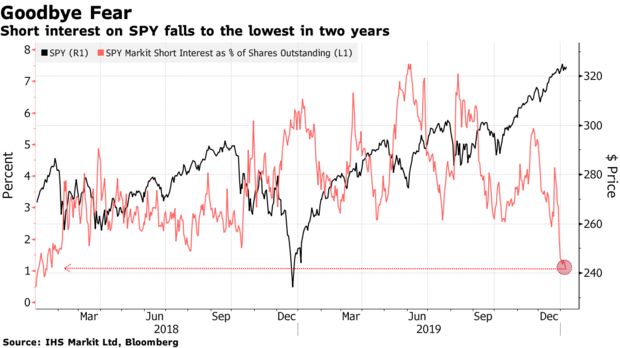 In addition, hedging activity is becoming virtually nonexistent. Investors are throwing caution to the wind. 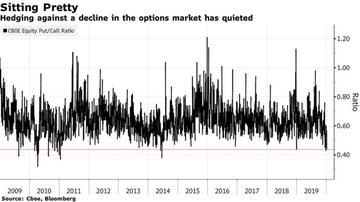 My inner investor is still bullishly positioned. At worse, we may see a 5% correction, which is a blip for an investment account.

My inner trader took some partial profits today, but he remains long the market. At current levels, the market has greater potential for a stumble. Friday’s Jobs Report could disappoint, and it is unclear whether the Chinese are prepared to actually sign a Phase One trade truce on January 15, despite the announcement by the US side.

Ride the bull, but maintain a tight leash on your risk.

4 thoughts on “Buy the cannons, sell the trumpets?”