Fade the fear spike – Humble Student of the Markets

Global stock markets opened the week with a risk-off tone. As the day went on, the New York market began in the red, but recovered to be positive for the day.

I wrote on the weekend that I still had a bullish tilt, but “the market action in the coming week will be highly informative of market psychology and the market’s technical structure”:

I interpret these conditions as the short-term bias to be still bullish. Our base case scenario is the melt-up is not over. The geopolitical shock represents a welcome test for both the bulls and the bears. Watch for a minor pause in the market, followed by further gains marked by negative divergences and an inverting VIX term structure. Those will be the signals for traders to sell. Assuming our bullish thesis is intact, the market is sufficiently oversold levels for prices to bounce.

My base case scenario seems to be playing out as expected.

Even though there was some belligerent rhetoric from both Iran and Trump on the weekend, there are signs that the geopolitical fear spike is fading. Despite Trump’s bellicose tone, he is becoming increasingly isolated, and he is not receiving any support from allies. Macron (France), Merkel (Germany), and Johnson (UK) released a joint statement calling for calm.

We have condemned the recent attacks on coalitions forces in Iraq and are gravely concerned by the negative role Iran has played in the region, including through the IRGC and the Al-Qods force under the command of General Soleimani.

There is now an urgent need for de-escalation. We call on all parties to exercise utmost restraint and responsibility. The current cycle of violence in Iraq must be stopped.

We specifically call on Iran to refrain from further violent action or proliferation, and urge Iran to reverse all measures inconsistent with the JCPOA.

We recall our attachment to the sovereignty and security of Iraq. Another crisis risks jeopardizing years of efforts to stabilize Iraq.

We also reaffirm our commitment to continue the fight against Daesh, which remains a high priority. The preservation of the Coalition is key in this regard. We therefore urge the Iraqi authorities to continue providing the Coalition all the necessary support.

We stand ready to continue our engagement with all sides in order to contribute to defuse tensions and restore stability to the region.

While Trump has shown a tendency to ignore Europe, a report indicates Israel’s Netanyahu has distanced himself from the conflict.

In addition, Bloomberg reported that the Saudis have sent a delegation to Washington asking for de-escalation. They don’t want a war either.

Gulf Arab states, potential targets for retaliation after the U.S. assassinated Iran’s top general, are working on multiple tracks to try to keep tensions between Tehran and Washington from building into a military confrontation.

“The message from the Gulf to the U.S. is clear: They are telling Trump, ‘Please spare us the pain of going through another war that would be destructive to the region,’” said Abdulkhaleq Abdulla, a political science professor in the neighboring United Arab Emirates. “We will be the first to pay the price for any military showdown, so it’s in our best interest not to see things get out of hand.”

The Iranian regime has shown itself to be rational actors in the 40 years of its existence. While it may retaliate in a limited fashion, as evidenced by its decision to resume uranium enrichment while allowing inspection in the country, it is unlikely to push the envelope so far to threaten its own existence.

With Trump isolated, and virtually all actors wary of conflict, it makes sense to fade the fear spike.

I also wrote on the weekend that to watch for signs of negative divergence on NYSI as the sign of a top to this latest market melt-up. That scenario seems to be playing out. 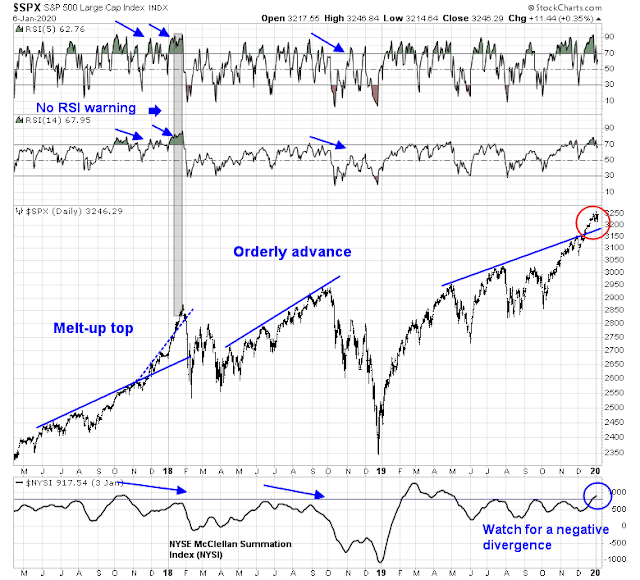 Kevin Muir, otherwise known as The Macro Tourist, also advanced a theory in his latest post that the latest melt-up is likely to peak out in late January. He referred to an observation by FX trader Brent Donnelly:

My observation in past years is that the hot trades of the New Year start to work in late December and trend for the first 4 to 6 weeks of the year. Around the end of January, those trades become random. Sometimes they mean revert; sometimes they don’t.

Muir believes that Stan Druckenmiller represents the way the fast money is shifting. In a December Bloomberg interview, Druckenmiller revealed that he was bullish again:

When risk assets rebounded from a swoon in the fourth quarter of 2018 and the Fed eventually cut rates, Druckenmiller pivoted. He remains bullish heading into next year.

“We have negative real rates everywhere and negative absolute rates in a lot of places,” he said. “With that kind of unprecedented monetary stimulus relative to the circumstances, it’s hard to have anything other than a constructive view on the market’s risk and the economy, intermediate term. So that’s what I have.”

Muir summarized Druckenmiller’s position as long equities, commodities, and commodity currencies, while short fixed income. If Kevin Muir is correct, then the risk-on tone should continue until about month-end, but watch for signs of a negative NYSI divergence for a sell signal.

9 thoughts on “Fade the fear spike”