How far can stock prices rise? – Humble Student of the Markets 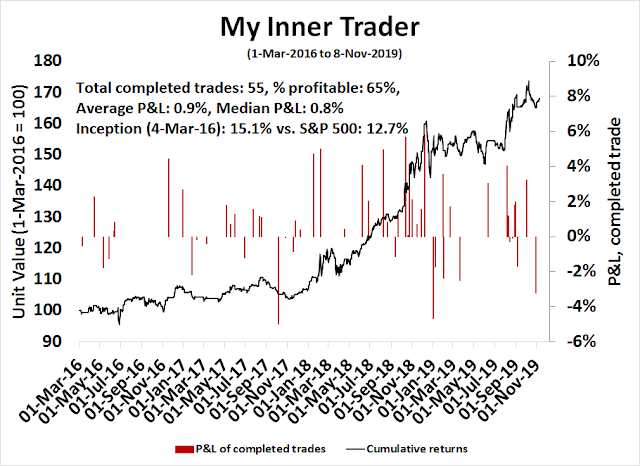 The art of upside target projection

It has become evident to technical analysts that the stock market has staged a convincing upside breakout. Not only have the major global averages broken out to the upside, the monthly charts of selected indices have flashed MACD buy signals. In the past, such buy signals have indicated significant price gains, with only minor downside risk. 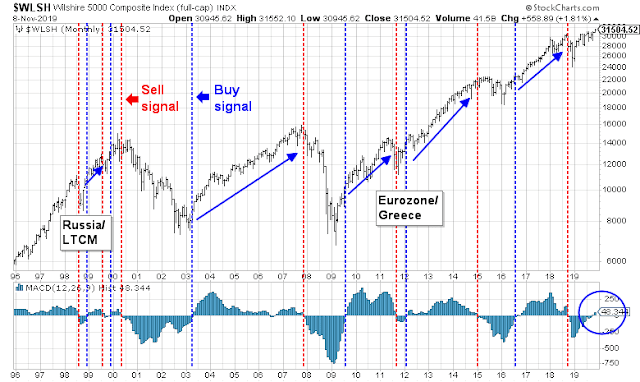 In that case, what is the upside potential for stocks? We estimate targets using a variety of technical and fundamental techniques, and arrived at some different answers.

I found that price targets derived from technical analysis are highly ambitious and they call for upside potential of 25% or more. By contrast, valuation and longer term projections point to highly subdued return expectations. My Third Way scenario postulates that the S&P 500 could see a price appreciation potential of 10-13%, or 3380 to 3480 before suffering a downdraft of unknown magnitude.

A brief survey of technical analysis revealed some astounding upside targets. Callum Thomas observed that Peter Brandt had projected an S&P 500 target of 3524. 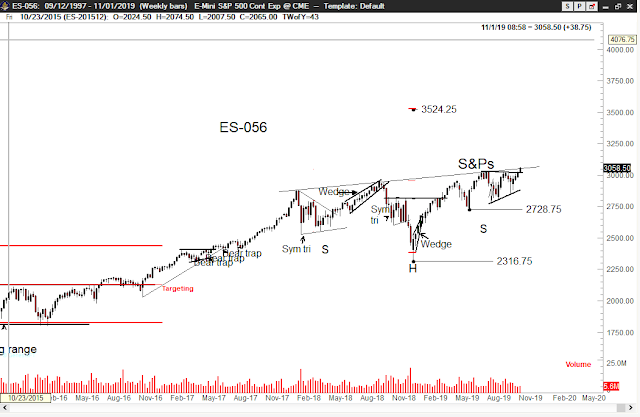 Point and figure charting yielded a series of different results, depending on the parameters set in the charts. We tried daily, weekly, and monthly charts, with traditional and 1% boxes, and 3-box reversals. The upside target ranged from 3750 to 4100, with most clustered in the 3900-4000 range. These are all aggressive targets with upside potential of 22% or more from current levels. 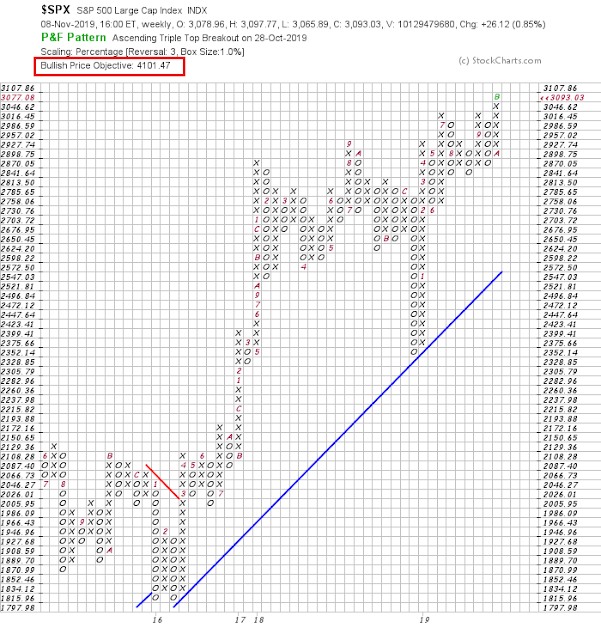 While these are not purely technical targets, Callum Thomas also highlighted the bullish analysis from perennial bull Tom Lee of Fundstrat, who projected even more upside potential for stock prices.

The sunny technical forecasts are tempered by market valuation headwinds. The S&P 500 trades at a forward 12-month P/E ratio of 17.5, which is nearing the nosebleed zone. The E in the P/E ratio would have to improve considerably to justify these multiples. 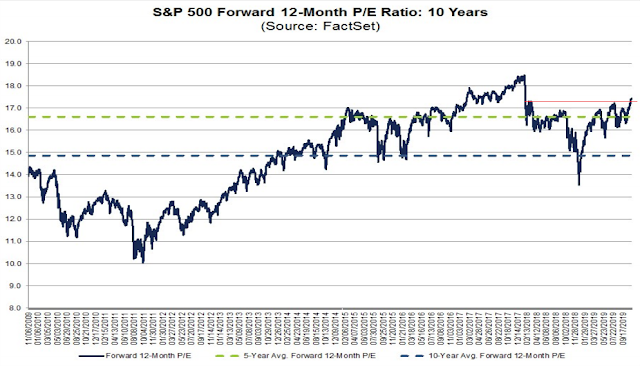 From a longer term fundamental perspective, David Merkel projected a 10-year total return of only 3.6% on September 21, 2019, when the S&P 500 stood at 2990. These forecasts have been remarkably accurate. If 3.6% return were to be realized, it would either mean that the uber-bullish technical targets are pure fantasy.

There are many ways of estimating long-term returns. Merkel explained that he tried using a variety of valuation techniques, which explained “60-70% of variation in stock returns”. He settled on a technique he found at the blog Philosophical Economics,

The basic idea of the model is this: look at the proportion of US wealth held by private investors in stocks using the Fed’s Z.1 report. The higher the proportion, the lower future returns will be.

There are two aspects of the intuition here, as I see it: the simple one is that when ordinary people are scared and have run from stocks, future returns tend to be higher (buy panic). When ordinary people are buying stocks with both hands, it is time to sell stocks to them, or even do IPOs to feed them catchy new overpriced stocks (sell greed).

The second intuitive way to view it is that it is analogous to Modiglani and Miller’s capital structure theory, where assets return the same regardless of how they are financed with equity and debt. When equity is a small component as a percentage of market value, equities will return better than when it is a big component.

Bottom line: Both equity valuation and a survey of private investor positioning suggests sub-par US equity returns. The gains of 20% or more appear way too ambitious.

How can we square the circle of these contradictory views?

Investors can resolve this dilemma by recognizing that there are different time frames to the two schools of thought. The analysis of short-term macro outlook, institutional positioning, and valuation suggests that both are right. A more reasonable scenario is a bubbly market melt-up, followed by a downdraft, all in a 2-3 year time frame.

Let us first consider the issue of institutional positioning. Macro Charts analyzed stock and bond fund flows and concluded that investors had become excessively cautious, and the latest upside breakout in the major global equity markets is a signal that stock prices are ready to soar as sentiment changes from fear to euphoria. 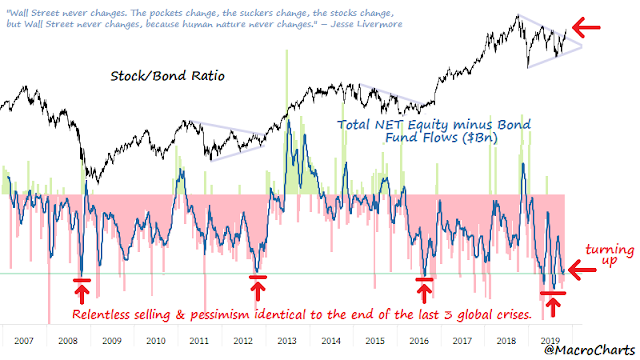 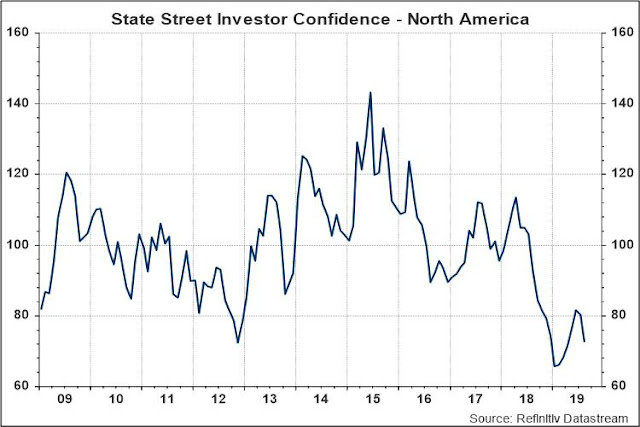 The latest BAML Global Fund Manager Survey reveal a more nuanced view. The average global manager holds a below average equity weight while overweighting defensive sectors and underweighting cyclicals. That said, they were overweight US equities, as the US economy was the last bastion of growth in a growth starved world.

In addition, analysis from JPM shows that hedge fund equity beta is still very low. Further market gains would have the potential to spark a short-covering stampede. 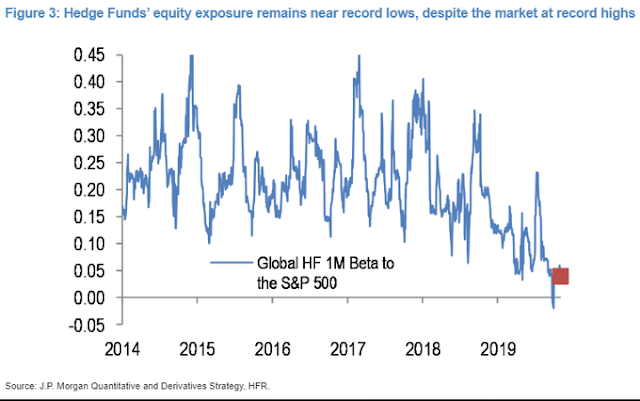 The cycle turns up

The combination of an overly defensive institutional positioning and a cyclical turnaround could be the spark for a risk-on stampede. Indeed, we are starting to see signs of a cyclical revival. Robin Brooks of IIF observed that global PMIs are rebounding, indicating excessive overshoot to the downside. 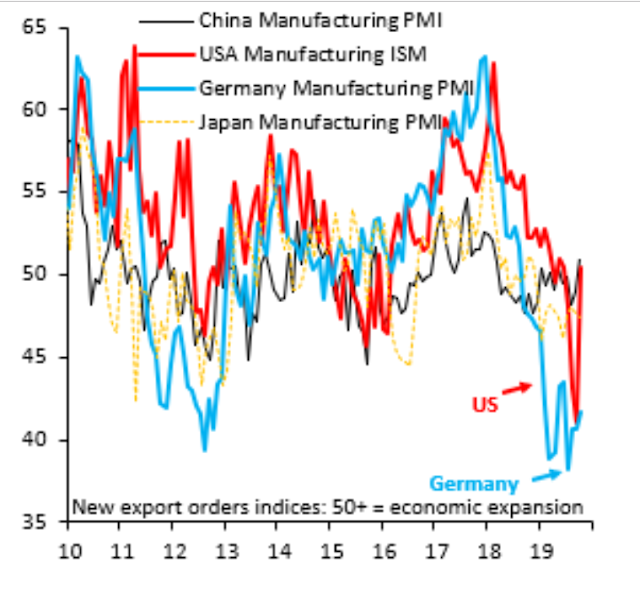 There are signs of stabilization in Europe. German exports rose 1.5% month/month and it was the biggest increase since November 2017. As Germany has been the locomotive of growth and exports in the eurozone, this latest reading gives some relief to recession fears. 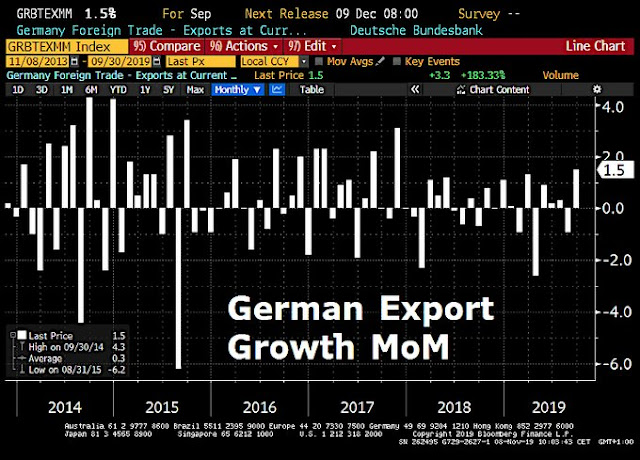 Real-time market data is also supportive of a turn in the cycle. The yield curve is steepening, which is a signal that the bond market expects better economic growth. 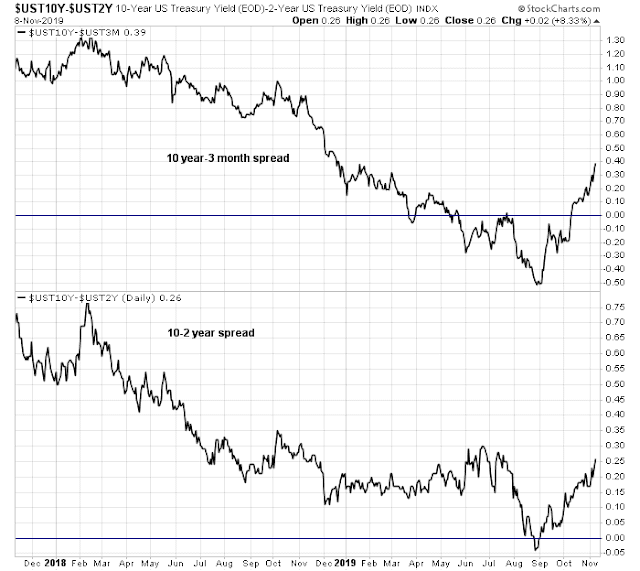 The relative performance of cyclically sensitive industries, such as global industrial stocks and global auto stocks, have bottomed and they are starting to turn up. 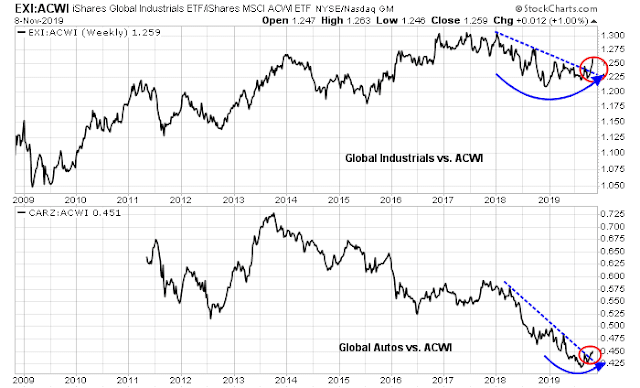 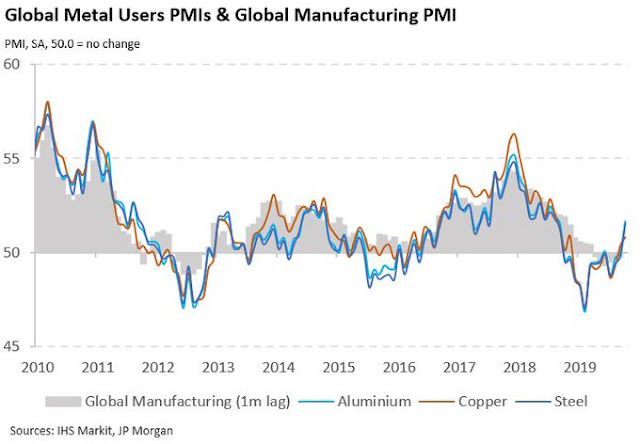 We began this exercise by trying to square the circle of highly bullish technical targets with cautious fundamental equity targets. The scenario I sketched out is an overly defensive institutional investor community that is caught offside by a cyclical revival, and chases equity market beta in a FOMO (Fear of Missing Out) rally.

While S&P 500 valuations are somewhat elevated, they are not yet at bubbly levels just yet. I refer readers to Ed Yardeni’s “Rule of 20”, which states that investors should be cautious when the sum of the forward P/E and inflation rate exceeds 20. With the forward P/E at 17.4 and CPI inflation at 1.7%, we are not there yet. 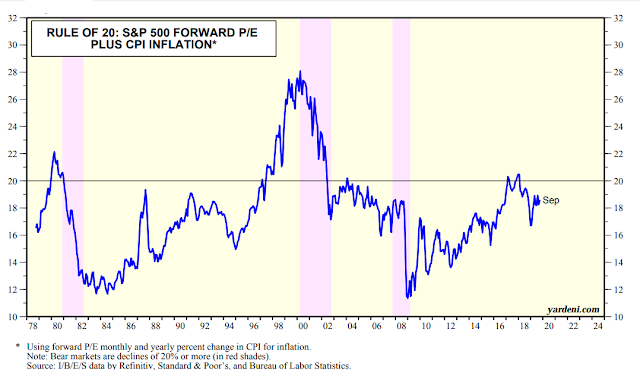 In summary, price targets derived from technical analysis are highly ambitious and they call for upside potential of 25% or more. By contrast, valuation and longer term projections point to highly subdued return expectations. Our Third Way scenario postulates that the S&P 500 could see a price appreciation potential of 10-13%, or 3380 to 3480 before suffering a downdraft of unknown magnitude.

Looking to the week ahead, there are numerous signs that the market is setting up for a bullish stall. The Fear and Greed Index closed Friday at 91, which would normally be interpreted as contrarian bearish. However, past episodes of Fear and Greed Index spikes has seen the market either pause and consolidate its gains, or stage a shallow pullback, to be followed by more gains. 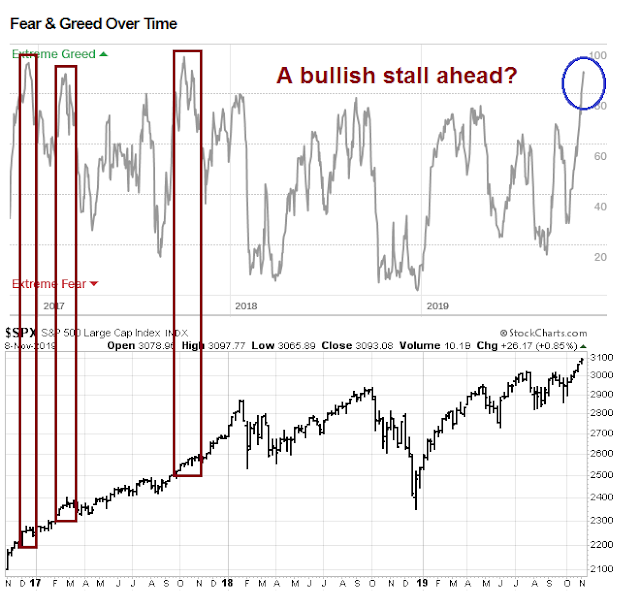 The daily S&P 500 chart tells a similar story. The 5-day RSI is flashing a series of “good overbought” conditions, which are signs of powerful price momentum. However, the advance has tended to stall out when the 14-day RSI reaches 70, but most of these cautionary signals were followed by only minor sell-offs. 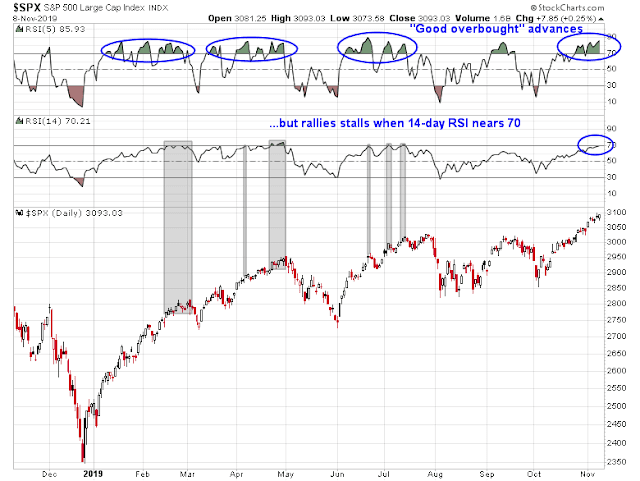 The weekly chart shows that the index closed above its upper Bollinger Band. Such episodes are relatively rare. With the exception of the late 2017 market melt-up, upper BB closes have resolved themselves with sideways consolidations, but with a bullish bias.

However, market positioning is supportive of near-term weakness. Charlie McElligott of Nomura pointed out that dealer gamma and delta are at extremes together. Such conditions have usually resulted in market pullbacks.

Q3 earnings season is mostly done as 89% of companies have reported results. The latest update from FactSet shows that forward 12-month EPS constructively rose last week, but the 4-week revision rate is still negative. The EPS and sales beat rates are slightly above historical averages, but only marginally. So the jury is still out on whether the bulls can expect fundamental support. 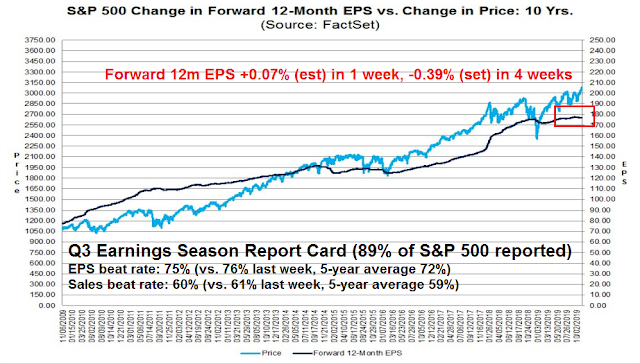 Most sentiment models are not extreme enough to flash sell signals. As an example, the AAII Bull-Bear spread is elevated, but readings do not indicate a crowded long position. 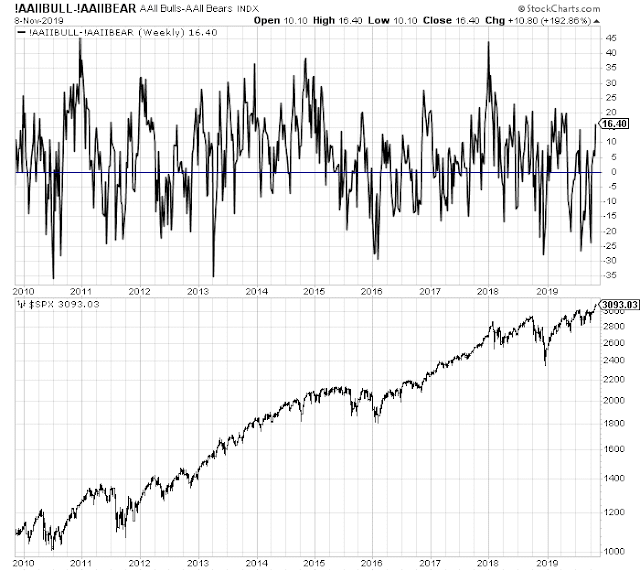 Similarly, the Citi Panic/Euphoria has been rising, but readings are firmly in neutral territory. 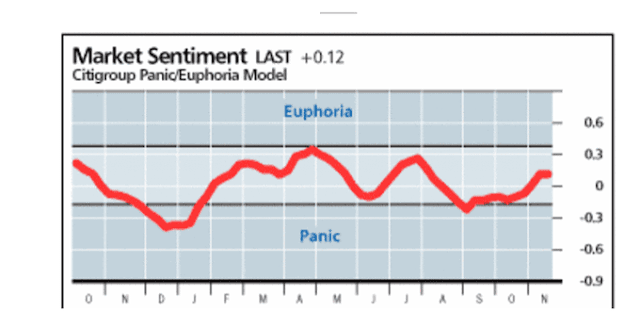 Possible disappointment over the “Phase One” trade deal remains the most likely spark for market weakness. The market became excited last week when China announced that both sides had agreed to gradually reduce tariffs as part of a “Phase One” agreement. It was later denied by the White House. The editor of Chinese official media Global Times responded that proportional tariff escalations is a condition of a deal. 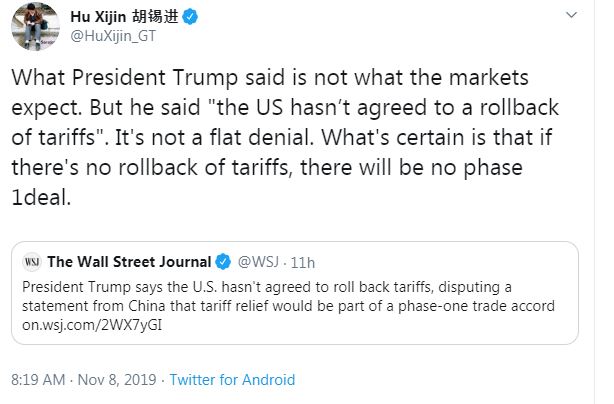 Reuters summed up the negotiation this way:

Officials from both countries on Thursday said China and the United States had agreed to roll back tariffs on each others’ goods in a “phase one” trade deal. But the idea of tariff rollbacks met with stiff opposition within the Trump administration, Reuters reported later on Thursday.

Those divisions were on full display on Friday, when Trump – who has repeatedly described himself as “Tariff Man” – told reporters at the White House that he had not agreed to reduce tariffs already put in place.

“China would like to get somewhat of a rollback, not a complete rollback, ‘cause they know I won’t do it,” Trump said. “I haven’t agreed to anything.”

Our trade war factor shows that the market is discounting a very low level of trade tensions. Could this be an accident waiting to happen? Please be reminded that we have been here before. Both sides were close to a deal in May before talks broke down. 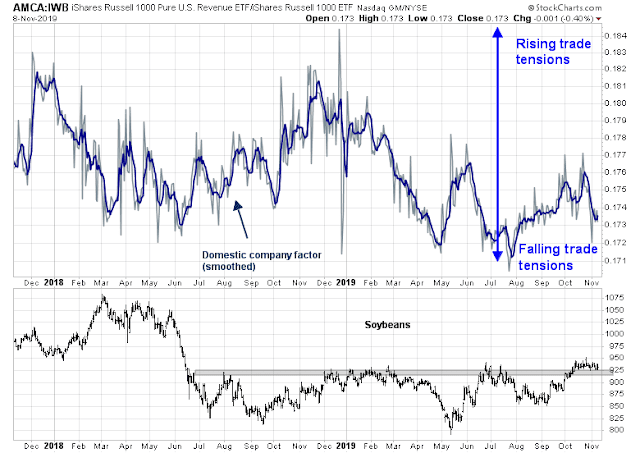 Next week is option expiry (OpEx) week. November OpEx seasonality has historically been below average for the bulls. The combination of sub-par OpEx seasonality, evidence of short-term exhaustion, and rising trade talk tensions could be the spark for consolidation and market weakness next week.

My inner investor is bullishly positioned as he is overweight equities. My inner trader is bullish, but he is keeping some powder dry and he is prepared to buy should the market pull back. He expects that any weakness will be relatively shallow, with downside risk of no more than 1-2%.

3 thoughts on “How far can stock prices rise?”