Evidence is piling up that the economy is undergoing a cyclical recovery after a soft patch. The technical picture confirms the cyclical rebound narrative. The market relative performance of cyclical sectors and industries are all turning up. Semiconductors are now the market leaders, though they look a little extended short-term. 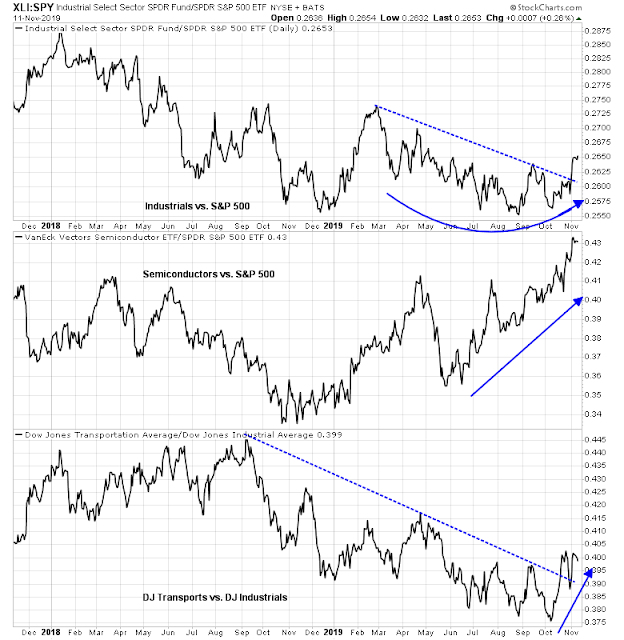 Here is the latest bottom-up update from The Transcript, which is a digest from earnings calls:

Succinct Summary: The US consumer is alive and well. The return of low rates has helped give the economy a boost, especially housing. It’s not a boom but an extension of the long bull market.

Labor markets are tight
“…the low unemployment rate and the numerous alternate employment opportunities makes the job of recruitment and retention more difficult than it has been in the past, limiting our ability to fully utilize our fleet and capture additional incremental market” – US Concrete (USCR) Chairman, CEO William J. Sandbrook

Thanks to low rates–It’s not a boom but an extension of the long bull run
“Overall low rates have strengthened home buying demand at least marginally over the course of the year…we may see broader price gains in the first half of 2020 and the return of bidding wars. It’s not a boom, but it extends the markets long Bull Run.” – Redfin (RDFN) CEO Glenn Kelman

Will there be a Phase One deal?

The key risk is the unraveling of the “Phase One” trade deal. We have seen this movie before. The market was given signals in May that US and Chinese negotiators were very close to a deal, then it all fell apart at the last minute.

Here is how Bloomberg’s outlined the risks:

The question on many people’s minds this Monday is whether that “substantial phase one deal” with China that President Donald Trump announced a month ago today is falling apart. There have certainly been enough conflicting signals coming out of the White House in recent days to make that a legitimate question. But the best answer to that may actually lie in the answers to another question: What happens if there isn’t a deal? So let’s consider that from the U.S. lens. There are consequences, you see.

My trade war factor is showing a high degree of complacency in the market. The red line measures the relative performance of Sheldon Adelson’s Las Vegas Sands (LVS), which holds major casino licenses in Macau that could be the target of Chinese political pressure should trade tensions rise. Soybean prices (bottom panel) is holding just above a key technical breakout level. All of these indicators point to expectations that a deal will be done. 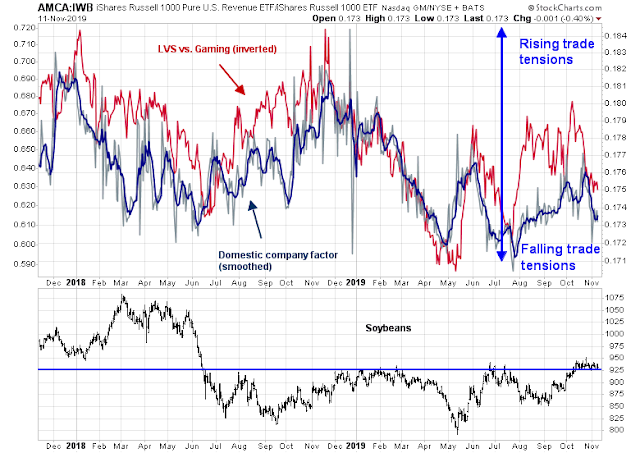 Will there be a deal? The Chinese have demanded gradual rollbacks, not just suspension, of tariffs. Trump hasn’t made any decisions yet on what he will do.

We may see more clues when Trump addresses the Economic Club of New York at a luncheon tomorrow on November 12. Stay tuned.

4 thoughts on “The biggest risk to the cyclical recovery”