Mid-week market update: As I expected, the Fed unveiled a dovish hold at its June FOMC meeting, as predicted by Tim Duy:

The Fed is likely to turn more dovish this week and open up the possibility of a rate cut. I think they still need more data to justify a rate cut. Another jobs report alone the lines of the May report would go a long way toward supporting that cut in July.

Out with “patience”, and in with “act as appropriate to sustain the expansion”* as the new mantra of monetary policy. The greenback feel, and the bond market reacted with a bull steepening. Interest rates fell across the board, but the yield curve steepened. 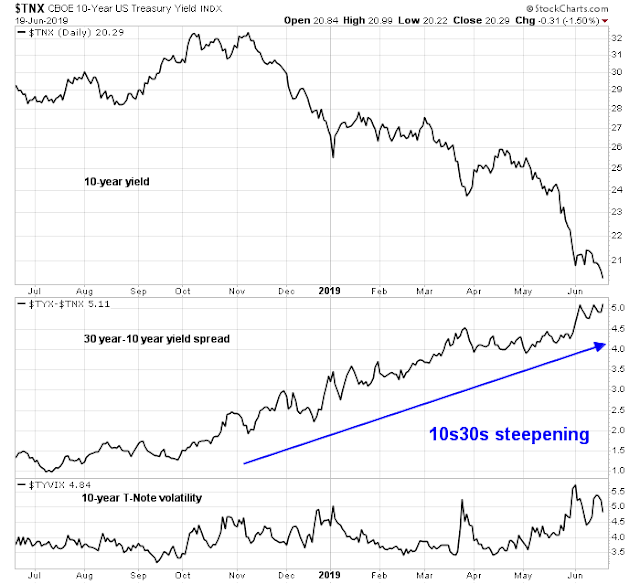 However, this sets up a difficult Catch-22 for Fed monetary policy makers.

* Colloquial translation: “An ounce of prevention is worth a pound of cure”.

The Fed has made it clear it is prepared to cut rates should signs of economic weakness appear, but what is it reacting to?

Trade war risk? Trump tweeted on Tuesday morning that he spoke to Xi Jinping on the telephone, and they are scheduled to meet on the sidelines at the Osaka G-20 summit in late June. Chinese official media Xinhua positioned the call as the Americans begging for a deal [the supplicant and the emperor, emphasis added]:

Chinese President Xi Jinping held a telephone conversation with his U.S. counterpart, Donald Trump, on Tuesday at the latter’s request.

Trump said he looks forward to meeting Xi again during the upcoming Group of 20 (G20) summit in the Japanese city of Osaka later this month, and conducting in-depth discussions on bilateral ties and issues of common concern.

The U.S. side, he added, values its economic and trade cooperation with China, and hopes that the teams on both sides can conduct communication, and find a way to resolve the current dispute as soon as possible.

Trump said he believes the entire world hopes to see the United States and China reach an agreement.

For his part, Xi said some difficulties have recently occurred in China-U.S. relations, which is in the interests of neither side.

Reiterating that both countries gain from cooperation and lose from confrontation, Xi said the two sides should, in accordance with the consensus he has reached with Trump, push forward the China-U.S. relationship featuring coordination, cooperation and stability on the basis of mutual respect and mutual benefit.

Catch-22. If the trade talks break up badly, stock prices would be in freefall. On the other hand, the expected rate cuts are less certain if both sides agree to a trade truce at Osaka. Bottom line: The markets may need to prepare for some form of disappointment, regardless of the outcome.

Risk appetite indicators also show growing uneasiness. Even as stock prices strengthened, the relative performance of high yield, or junk, bonds is lagging. In addition, the 9-day to 1-month VIX ratio is inverting, indicating rising anxiety, even as the 1-month to 3-month ratio remains relatively complacent. The last time this happened was late November (shaded in grey), which preceded the big stock market sell-off. 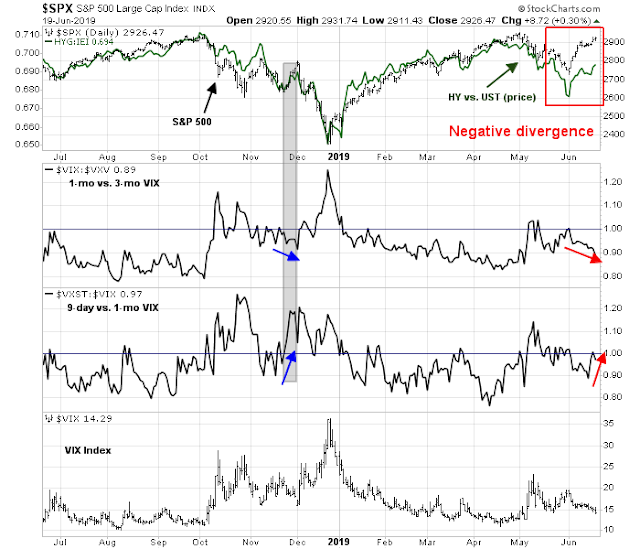 I am not necessarily suggesting that stock prices are due to crater as they did in December. The elevated level of 9-day VIX is reflective of jitters over the Osaka G-20, which is to be expected. However, these conditions do highlight the risks if the talks fall apart next week.

I would also like add a word about the results of the latest BAML Global Fund Manager Survey (FMS). Various media outlets have highlighted the high level of defensiveness of global institutions, which should be contrarian bullish (see Marketwatch as one of many examples). Looking under the hood of the survey, I beg to differ.

Sure, cash levels have jumped, indicating rising fear. However, I would point out that the FMS readings are not actionable signals. In the past, stock prices have continued to fall when cash levels reached current levels (annotations are mine). 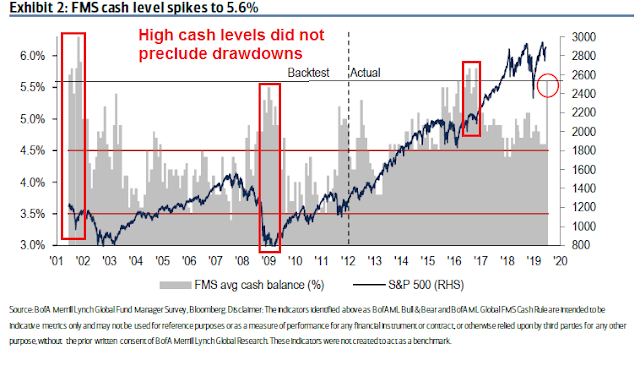 The FMS reported that equity weights have fallen dramatically, but closer analysis of equity positions by region shows that managers actually raised their US weights.

The retreat in equity weightings is mainly attributable to EM equities, and, to a lessor extent, Japan (not shown). 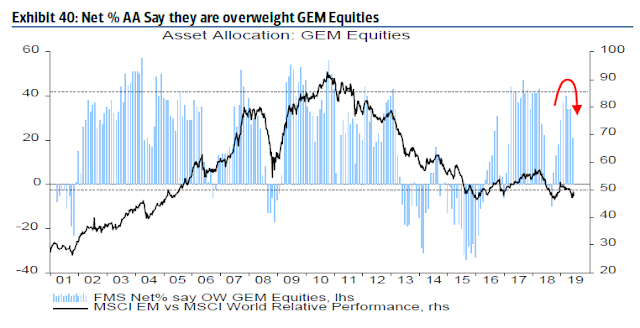 Equity position by hedge fund is about average. Should the market experience a negative surprise, the loss sensitive fast money crowd will be the first ones rushing for the exits. 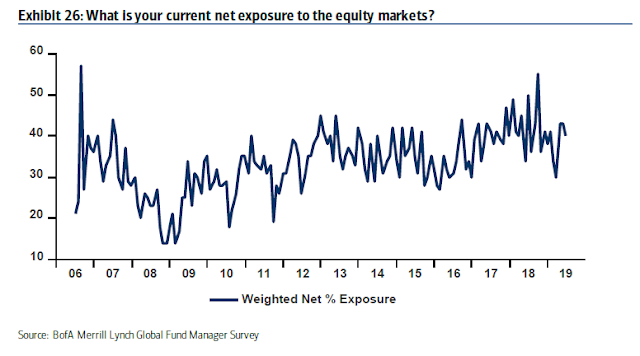 The FMS results are confirmed by the State Street Confidence Index. North American confidence fell to historically low levels and they have begun to recover, which is consistent with the observed increase in US equity weight. 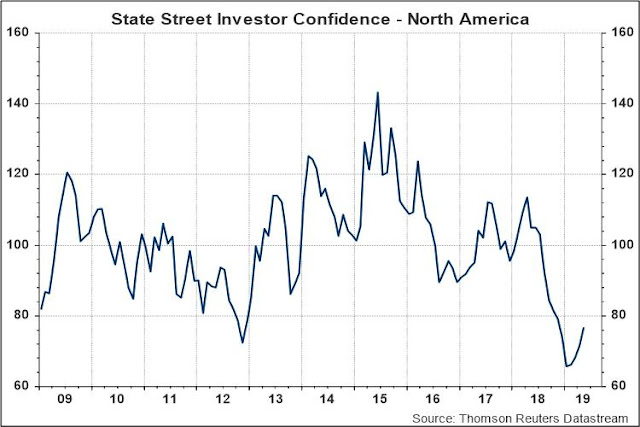 By contrast, confidence in Asia is falling like a rock, which is consistent with the decline in EM and Japanese equity weights from the FMS. 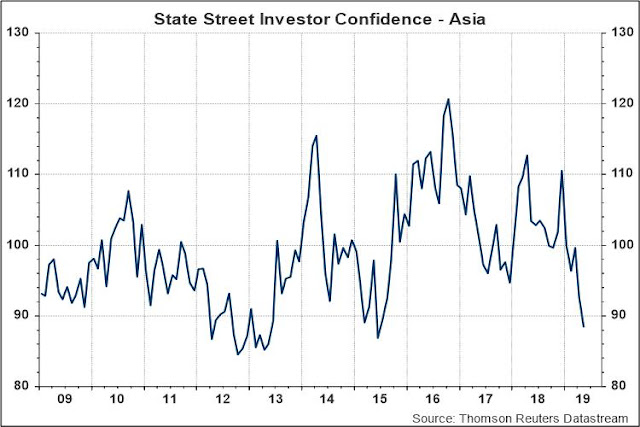 Despite the headlines about surging FMS cash levels, these readings are not sufficiently bearish to put a floor on stock prices in the event of a negative macro development. For that, we need some confirmation from insider trading. For now, insider activity is not showing prolonged periods of excessive buying. Don’t expect too much downside protection from institutional positioning should trade talks break down.

My inner investor is remaining neutrally positioned at near his benchmark weights. My inner trader is stepping aside in this headline driven market, where a single tweet could either send prices soaring or into free fall.