A 2018 report card – Humble Student of the Markets

The year is nearly over, and it is time to issue a report card for my investor and trading models. Overall, both had good years, except for the trading blemish at year-end.

My inner investor could not have asked for much more. He was correctly bullish during the run-up from early 2016, and turned cautious at the January top. He turned bullish again as the market corrected in February, and became cautious again in August (see A major top ahead? My inner investor turns cautious).

The cautiousness turned into bearishness in early December when my Ultimate Market Timing Model flashed a sell signal after a 10% drawdown (see A bear market is now underway). As a reminder, the Ultimate Market Timing Model is a very slow turnover model that changes its views only every few years. It was designed for by investors with long term horizons, with the intention of avoiding the worse of equity drawdowns associated with major bear markets:

I am indebted to the blogger at Philosophical Economics who suggested a macro overlay to trend following systems (see Building the ultimate market timing model). Major bear markets generally occur under recessionary conditions. Why not ignore moving average signals until your macro model is forecasting a recession?

This “Ultimate Market Timing Model” is ultimately beneficial for long-term investors. If you could cut off the left tail of the return distribution and avoid the really ugly losses, you could run a slightly more aggressive asset mix and receive a higher expected return with lower risk. For example, if the standard risk-return analysis dictates a 60% stock and 40% bond asset mix, you could change it to a 70/30 mix with this model, and get downside risk similar to the 60/40 portfolio. To be sure, this system isn’t perfect, and anyone using such a model will have to incur “normal” equity risk, and it would not have kept you out of the market in the 1987 Crash.

Little did I expect the market to fall so dramatically after that sell signal, but I can’t ask for much more in an asset allocation model, either on an intermediate or long term perspective.

The trading model also had a reasonably good year. The hypothetical return of the signals, based on end of day prices, no transaction costs, and no dividends, was 40.6% to December 26, 2018, compared to capital only return of -7.7% for the SPX. The trading model managed to catch virtually every major turning point, except for the one major blemish at the end of the year. 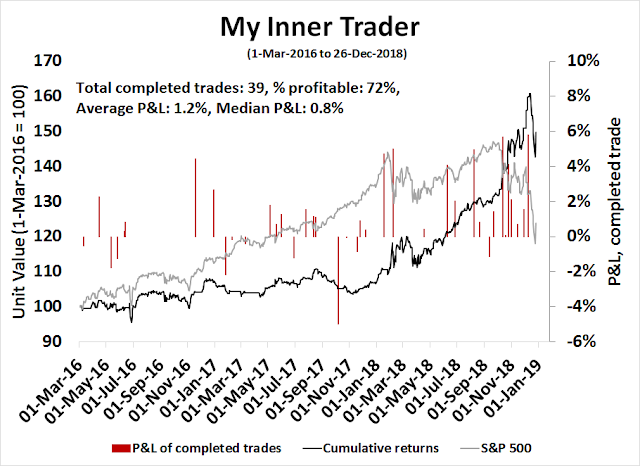 The above chart of the out-of-sample returns of the trading model is revealing in a number of respects. The model trailed the market since its March 1, 2016 inception until recently. That’s one feature of these kinds of market timing and swing trading models.

Daily stock returns were positive 54.0% of the times during the measurement period. That means that if you no other information, the default bet should be a bullish one, and if you are flipping a coin, you would have a 4% disadvantage.

Conceptually, market timing is designed to avoid bear phases, and they tend to outperform simple buy-and-hold strategies when there is a major bear phase. In effect, market timing and swing trading act as a form of downside insurance, and insurance has a cost. Think of it as a long position married with a put option.

The second lesson for traders can be learned from the drawdown at the end of the year, where the model was caught long as the market tanked. The drawdown is a feature, not a bug of the design of the trading model.

Here is another key lesson for traders. Trading models and systems are not magical black boxes. You have to make a bet somewhere in order to realize better returns. The corollary to that is sometimes those bets don’t pay off.  To protect yourself, understand the bets you are making, what the weaknesses of the trading system are, and when it may not work. And no bet works all of the time.

For traders, another lesson is to understand the bets that your trading systems are making, and control your risk accordingly. One way is to customize the position sizing based on specific risks of the trading system, or to diversify trading systems based on factor exposures.

Rob Hanna at Quantifiable Edges had a terrific example of how a trading system failed:

After the strong and persistent selling over the last few days I decided to examine other times like now where the SPX dropped at least 1.5% for 3 days in a row. The study below looks back to late 1987 and shows all 10 occurrences over the time period, along with their 10-day returns. The consistency and size of the bounces over the next 10 trading days is “very good indeed”. 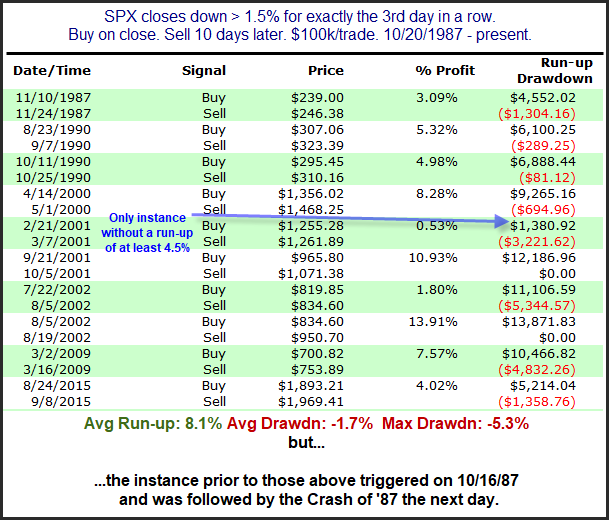 This system worked well…until it went long into the Crash of 1987. The moral of this story is “Understand your bets. Beware of tail-risk.”

I will close with an observation from Ray Dalio of Bridgewater. Drawdowns are opportunities for learning. Don’t be afraid of mistakes. 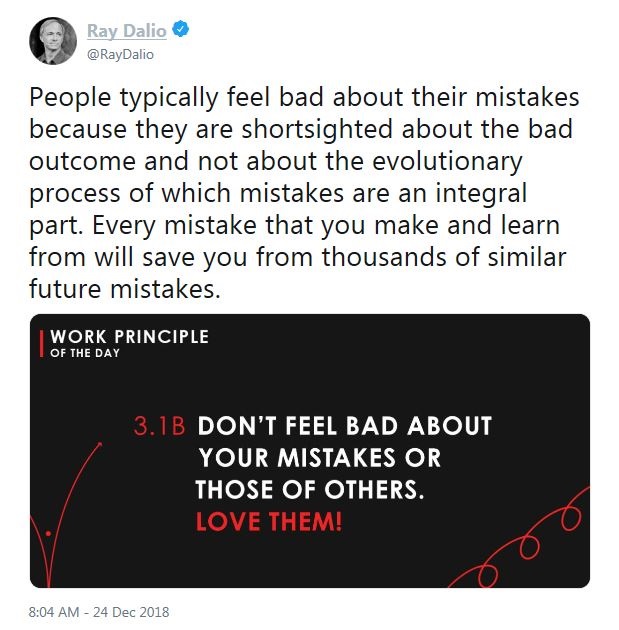