The calm before the storm? – Humble Student of the Markets

Notwithstanding today’s NAFTA USMCA driven reflex rally today, one puzzle to this market is the remarkable level of complacency in the face of potential market moving events, such as a trade war.

From a technical perspective, complacency can be seen through the historically low level of weekly Bollinger Band on the VIX Index, which has foreshadowed volatility spikes (h/t Andrew Thrasher). The chart below depicts the 10-year history of this indicator. While the sample size is small (N=5), four of the five past instances have seen market corrections (red vertical lines). The only exception occurred when the stock market had already weakened. When combined with episodes of low levels of NYSE and NASDAQ new highs, which is the case today, the outlook is particularly worrisome. 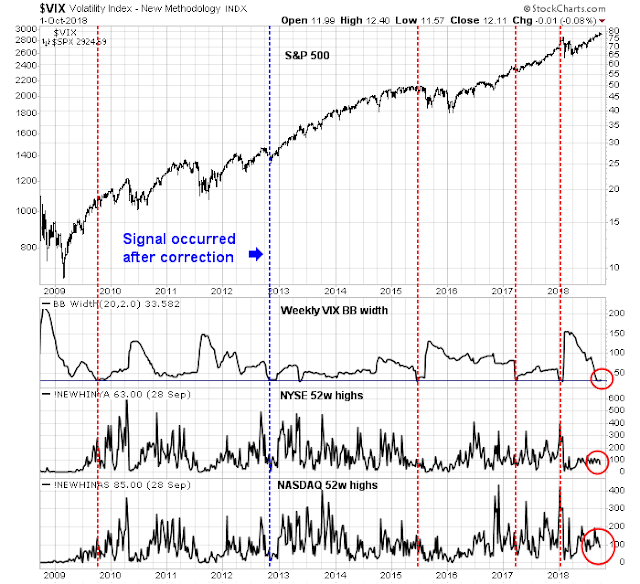 Another way of measuring complacency is through investor sentiment. Currently, bullish sentiment is elevated but not extreme. Callum Thomas of Topdown Charts combined AAII and II sentiment in a single metric, which shows equity sentiment at historically bullish levels, but they were higher at previous major market peaks. 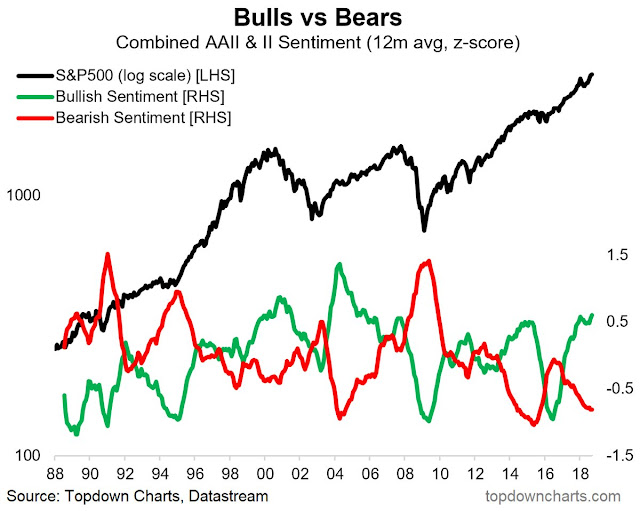 Similarly, the Bloomberg Global Risk-On has not seen such levels of bullishness since 2015. 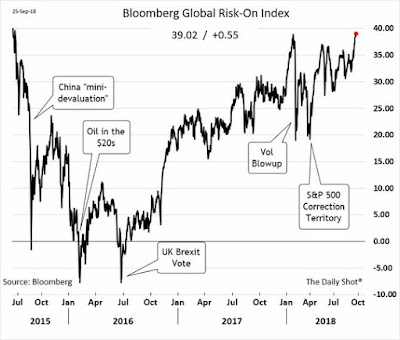 All we need to jolt the market out of its complacency is a bearish catalyst. There are several candidates for the triggers of a volatility spike.

A search for the bearish trigger

First, we have not seen the tariff retaliation from China, which could spook markets. The SCMP reported that flight bookings from China to the US for the Golden Week holidays is down a dramatic 42% from last year:

Chinese tourism to the United States is set to fall in next week’s National Day holidays, with flight bookings down and analysts saying numbers for the year are slowing as political tensions accelerate.

There has been a dramatic 42 per cent decrease in flight bookings from China to the US in next week’s holidays – known as “golden week” – compared with last year’s holiday week, according to travel fare search engine Skyscanner. Last year’s holiday period was one day longer.

The first three quarters of 2018 have seen a 16.7 per cent drop in flight bookings from China to the US, its figures show.

The fall in travel to the US is not attributable to a slowdown in growth. Aggregate Chinese tourism spending continues to rise, but they are avoiding the US:

“It looks like a trend,” said ForwardKeys spokesman David Tarsh, who predicts harm to the US economy caused by a downturn in Chinese tourism could reach half a billion dollars.

“The US runs a US$28 billion travel and tourism trade surplus with China,” said Jonathan Grella, spokesman at the US Travel Association, a Washington-based non-profit representing and advocating for the travel industry.

“The source of our concern is that these trade tensions could end up upsetting an economic dynamic that is really working for America right now,” Grella said, adding that the US$28 billion was calculated by the travel association using consumer spending data.

In addition, Chinese growth is slowing again. The New York Times reported that the authorities are instituting a clampdown on bad economic news. The imposition of administrative measures suggests that Beijing may not resort to the usual policy of fiscal stimulus as it had in the past (which I warned about in Is China ready for the next downturn?).

A government directive sent to journalists in China on Friday named six economic topics to be “managed,” according to a copy of the order that was reviewed by The New York Times.

The government’s new directive betrays a mounting anxiety among Chinese leaders that the country could be heading into a growing economic slump. Even before the trade war between the United States and China, residents of the world’s second-largest economy were showing signs of keeping a tight grip on their wallets. Industrial profit growth has slowed for four consecutive months, and China’s stock market is near its lowest level in four years.

Back in the US, Wall Street does not appear to have factored in rising labor costs in their estimates. The latest consensus estimates of profit margins for 2018-2020 are 11.9%, 12.5%, and 13.2% respectively. 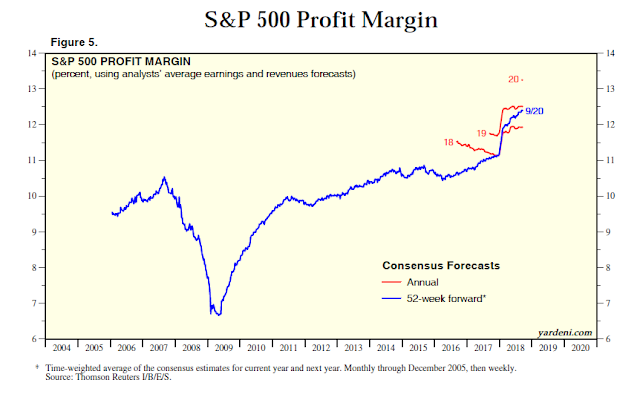 These margin projections fly in the face of the steady rise in labor costs, as measured by average hourly earnings. It appears that Wall Street analysts didn’t get the memo that rising labor costs will put downward pressure on operating margins. They are assuming that companies will be able to pass through price increases, which does not seem plausible in a highly competitive operating environment. We can already see that NIPA corporate profits deflated by unit labor costs have peaked. Past peaks have been recession warnings in previous cycles. 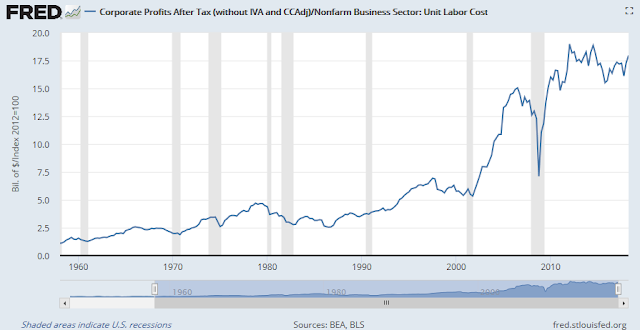 As we approach Q3 earnings season, FactSet reports that the level of negative pre-announcements has spiked to above average levels. At the same time, forward EPS revisions flattened out last week after a prolonged rise. This could either be a data blip, or the start of a series of downward estimate revisions. As stock prices have moved coincidentally with forward EPS estimates, this development is a potentially bearish development. Regardless, these conditions could set up a period of corrective market action sparked by earnings disappointment, or downward EPS revisions due to negative Q4 guidance. 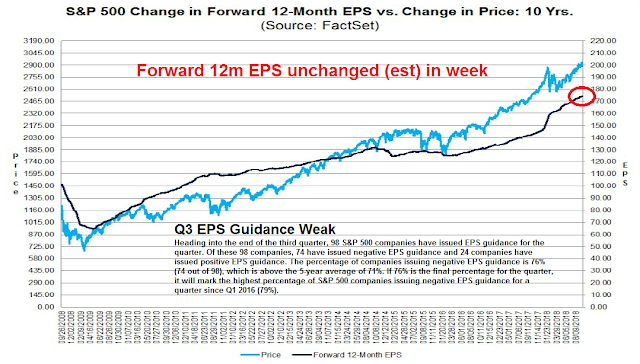 Lastly, the midterm elections are about a month away. The latest forecast from FiveThirtyEight shows that the Democrats have a 4 in 5 chance of taking control of the House, and a 1 in 3 chance of controlling the Senate. Lost in the discussion from market analysts are the fiscal implications of such a political shift.

Expect more questions of, “if you want _____, how will you pay for it?” (insert your favorite partisan initiative such as “tax cut”, “Space Force”, or “Medicare for All” into the blank). In all likelihood, fiscal policy will become either neutral or tighter under the split control of the White House and Congress. As the sugar high from the 2017 tax cut bill begins to fade, the economy will face both tighter fiscal and monetary policy, which is an outcome that few Street analysts have discussed.

5 thoughts on “The calm before the storm?”