Could a weak consumer stall the economy? – Humble Student of the Markets 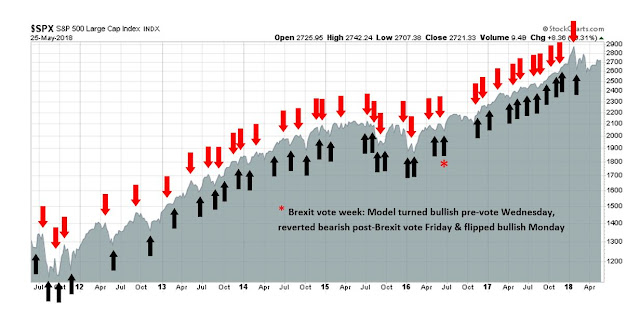 The headlines look dire. CNN proclaimed that “40% of Americans can’t cover a $400 emergency expense”, according to the Fed’s annual Report on the Economic Being of US Households. Further research from Google Trends showed that interest in consumer items is tanking. 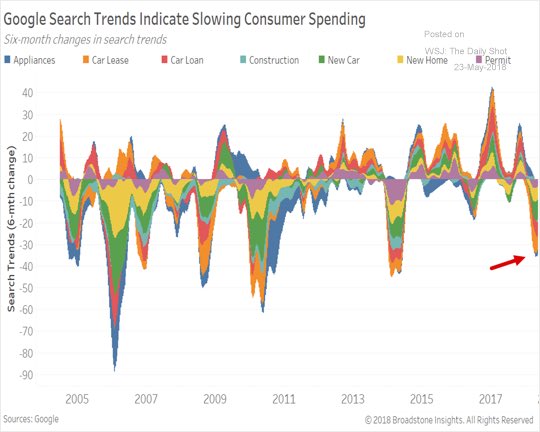 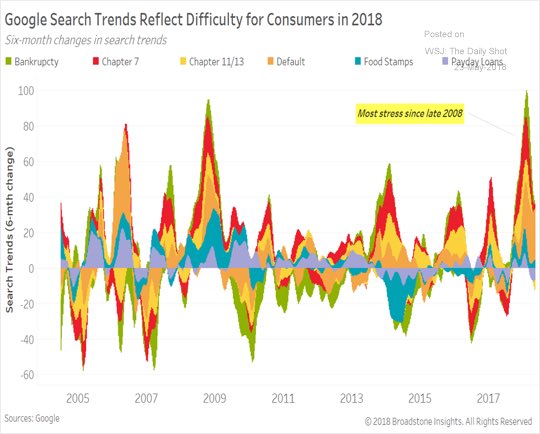 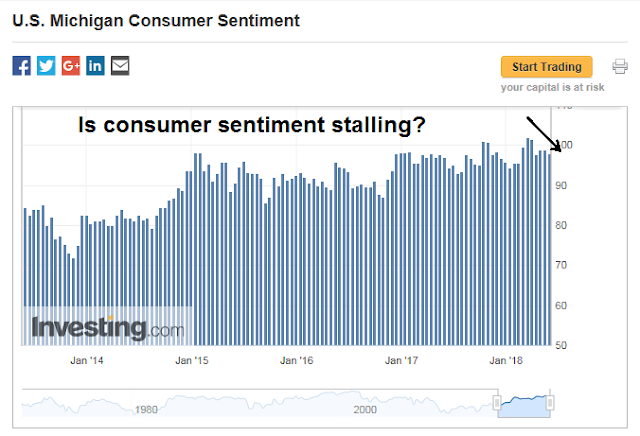 The economy is at or near full employment. Is this as good as it gets? Is this what prosperity looks like? What does this mean for policy makers?

For investors, the key question are:

To assess the financial status of the American household, let us first consider real retail sales, which is an important driver of economic growth. History shows population adjusted real retail sales has topped out before past recessions, and the latest data shows a possible plateau, but the jury is still out on that score. In the past, it takes about six months to confirm an actual peak in retail sales. The last peak occurred in November 2017, and the May 2018 data has not been reported yet. 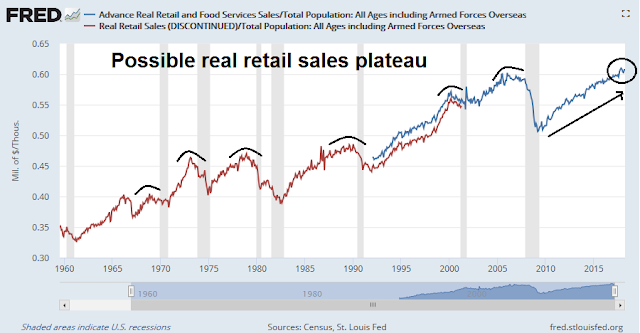 If consumer spending were to weaken, it would show up in the cyclically sensitive consumer durable sector. The report is also mixed. On one hand, auto sales appear to be rolling over after the most recent hurricane replacement spike. 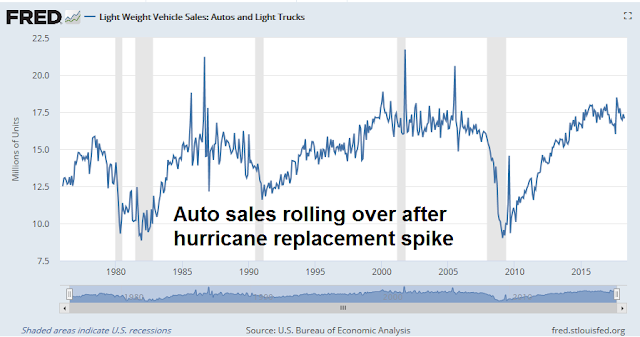 On the other hand, the housing sector appears to be still healthy. This cyclically sensitive sector has topped out ahead of past recessions, though it is enjoying a start of a demographic tailwind as millennials begin to enter the market and raise housing demand. 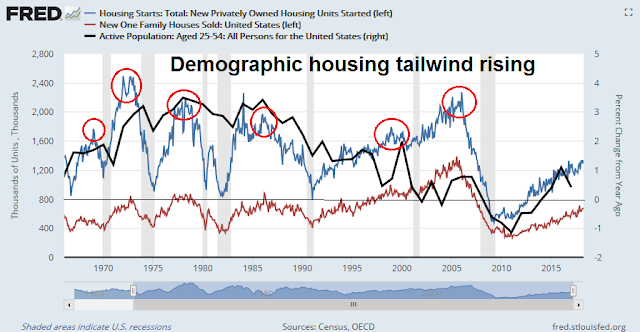 That said, the weak performance of the homebuilding stocks relative to the market has to be regarded as disappointing for the housing outlook.

Score retail sales and consumer durable sales growth as neutral. Real retail sales are trending up but may be plateauing, but the jury is still out. Auto sales are rolling over, but the housing sector remains strong, buoyed by positive demographics. The dire stories about a tanking consumer may be overblown.

The anatomy of consumer finances

Still, there is an element of truth that household finances are becoming more fragile. My analysis of consumer spending considers its underlying elements. It all begins with wage growth. While average hourly earnings have been rising steadily and annual growth now stands at 2.6%, the level of wage growth has been extraordinarily muted by historical standards. The unemployment rate is 3.9%, which was last seen in 2000, and before that, the 1960`s. 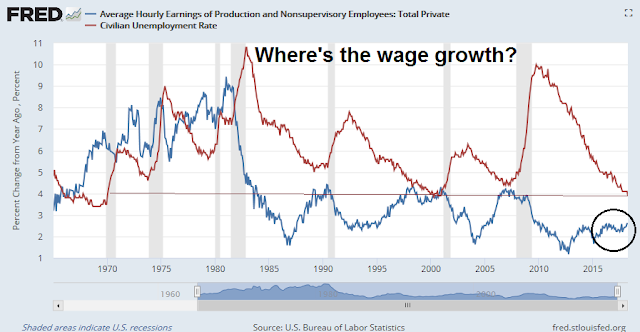 One of the puzzle that has bedeviled economists and policy makers is the lack of wage growth in the current tight labor market. A number of explanations have been advanced, such as demographics, where retiring well paid Baby Boomers are replaced by younger and less well paid Millennials. Another is the rise of an employer monosony holding down wages. The following chart from the San Francisco Fed shows “wage rigidity”, or the percentage of employees who have received no wage increases. Even with the unemployment rate at 3.9%, the current level of wage rigidity is higher than the peak seen in the last cycle. 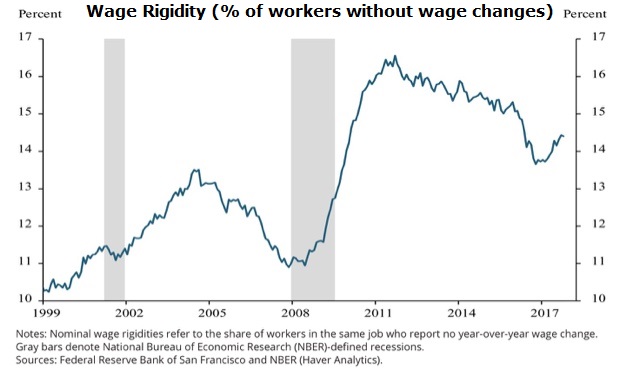 Wage growth is the primary driver of consumer spending. As this chart from Political Calculations shows, median real household income has been flat since 2000. 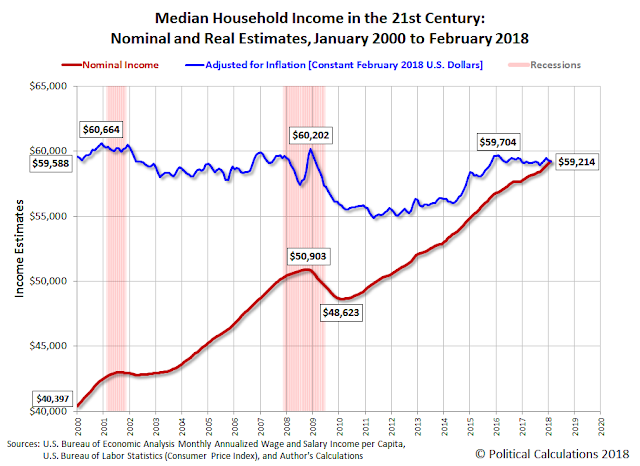 Still, households have other ways of coping in the face of stagnant pay increases. The first avenue of coping is to spend more by saving less. 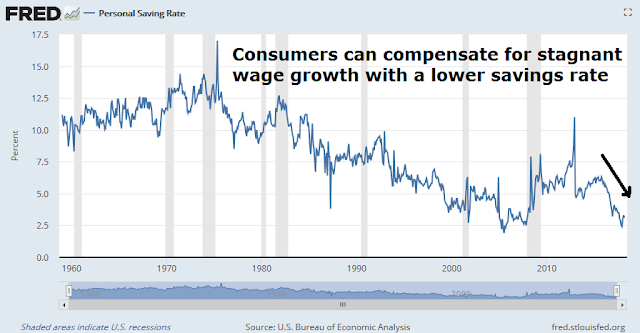 After drawing down savings, consumers could borrow to finance spending. The Fed’s flow of funds data shows that households are funding virtually all of their marginal expenditures with debt, up from 40% in 2013.

Rising debt raises financial risk for households. An analysis of the credit card delinquencies shows that as interest rates rise, delinquencies are likely to rise to recessionary levels by next year. 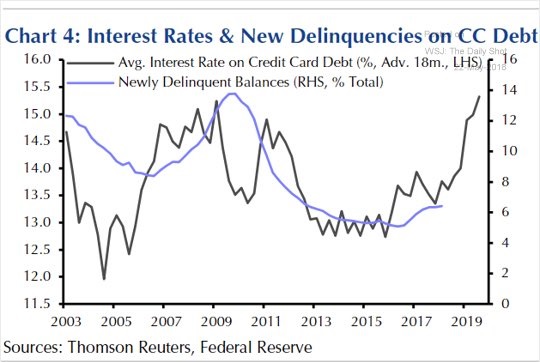 Despite the dire picture, household finances are not that dire as they seem. The latest update from JPM Asset Management shows that household debt ratios are still low, and their balance sheets are in good shape (annotations are mine). In other words, they have plenty of room to borrow if they want to. 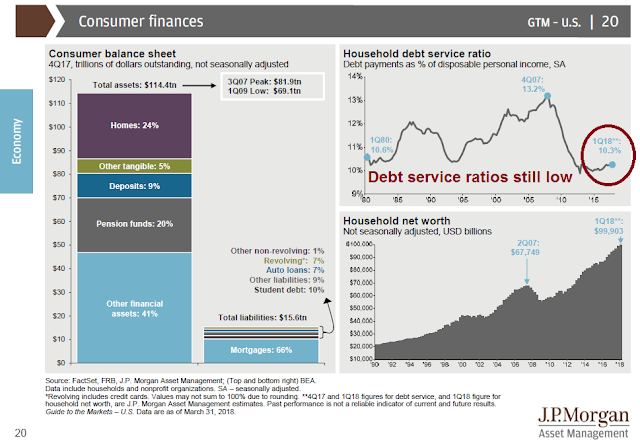 Liz Ann Sonders at Charles Schwab has created a Consumer Stress Index to measure the state of household finances. The latest readings indicate that consumer stress is rising, but readings are not in the danger zone yet. 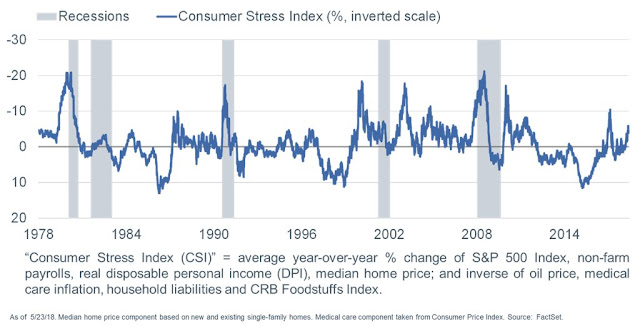 Oh, and the headline about 40% of American households who can`t cover a $400 emergency expense? While the absolute level is still worrisome, the same Fed survey shows that the trend has been steadily improving. 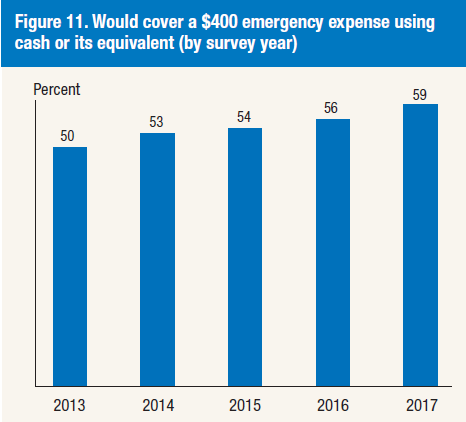 Moreover, the percentage of survey respondents who report that they are “finding it difficult to get by” has been falling as well. 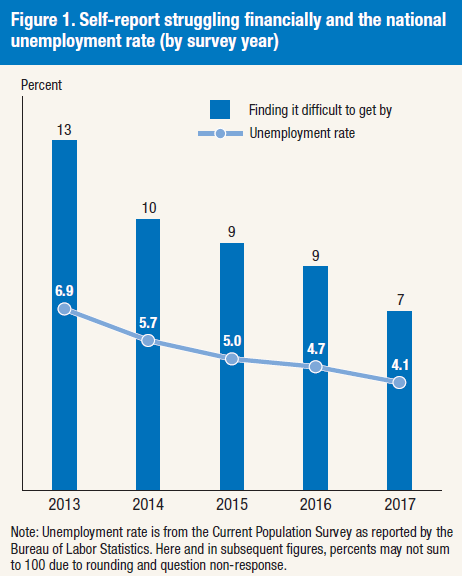 Does this mean the ominous headlines about deteriorating consumer finances are overblown and it’s time to sound the all clear? Not so fast!

Detailed analysis an picture of bifurcated consumer finances and rising household fragility that will haunt the economy in the next downturn. The Atlanta Fed’s wage growth tracker captured this effect. People with high skill sets consistently enjoyed higher wage growth compared to the rest of the population. Remember your math, a consistently higher wage growth will lead to an acceleration in wealth differences over a lifetime. 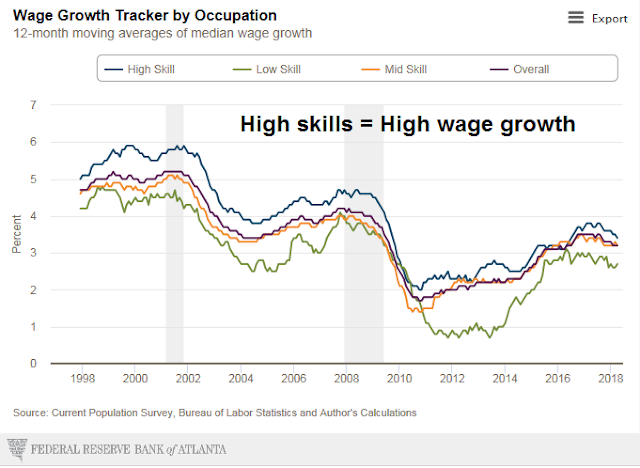 While the relationship is less clear, skill sets can be proxied by education levels. 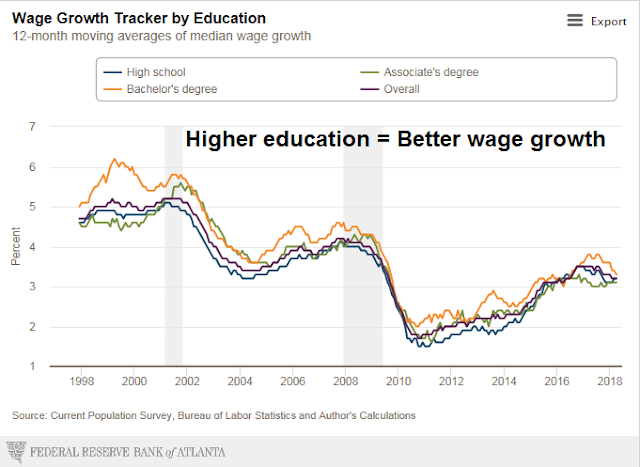 The Fed’s annual Report on the Economic Being of US Households tells a similar story of a financial divide is by education. Survey respondents were asked if they were “doing okay financially” and results increased steadily as education levels rose.

The flip side of the coin shows the respondents who were unable to fully pay the current month’s bills. We can observe a marked deterioration by education, and within each educational grouping, by race. 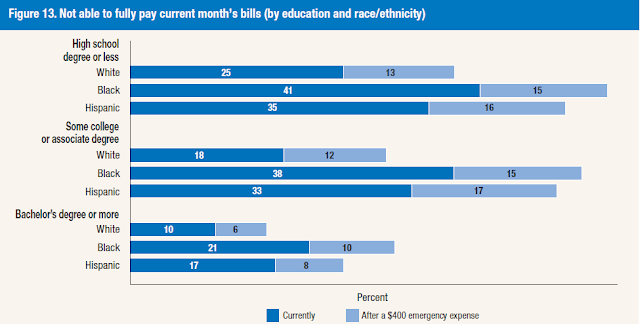 What about the American Dream and the idea of America as the land of opportunity? If education is the great equalizer, then the future looks problematical. Survey results show that parental educational attainment affect their children’s education levels.

In conclusion, aggregate statistics of household finances indicate that while consumer stress is rising, they do not constitute a danger signal of looming recessionary conditions. However, aggregates don’t tell the entire story, and further detailed analysis shows a bifurcation of household finances that will exacerbate the magnitude of the next downturn, and create longer term political problems in the United States.

Looking to the week ahead, positive macro momentum is holding up this market. The latest update from FactSet shows that forward 12-month EPS continues to surge upward. 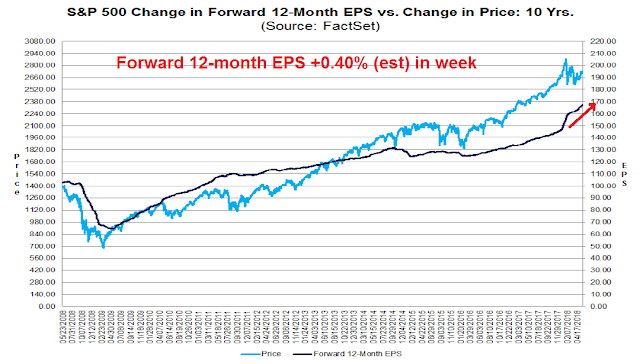 Other nowcast indicators are flashing bullish readings. The Philly Fed coincident state indices rose in 45 states, and the three month diffusion index was up in 49 states out of 50 (via Calculated Risk). Other elements of the Philly Fed indices are also upbeat (see Bear markets simply don’t start this way). 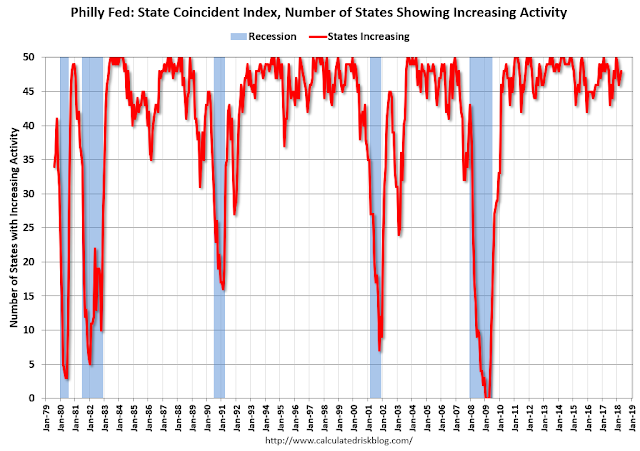 From an intermediate term technical perspective, the outlook is bullish. This chart from OpenInsider shows that insider selling usually exceeds insider buying and rarely do the two lines cross. In the last two instances where the two lines have intersected, downside equity risk was minimal. 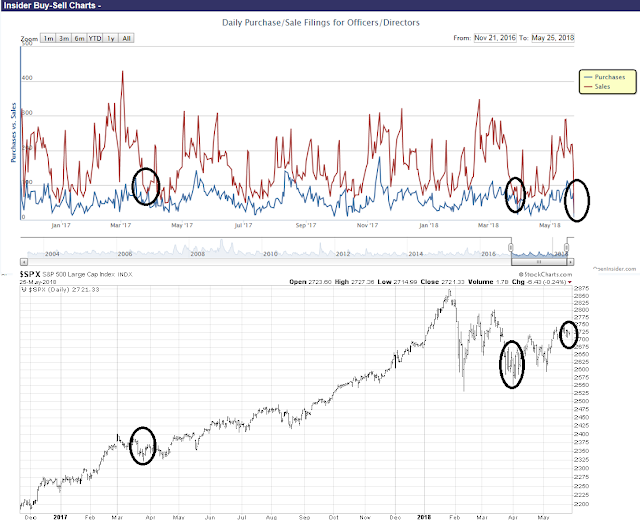 The OpenInsider buy signal was confirmed by the weekly summary of insider activity from Barron`s.

Shorter term, the SPX remains in a short-term no-man’s land between Fibonacci retracement levels of 2700 and 2740, with further resistance at 2800. Until either the bulls or bears can demonstrate sufficient resolve to break either of these levels, my inner trader is leaning slightly bullish but he is playing a waiting game. 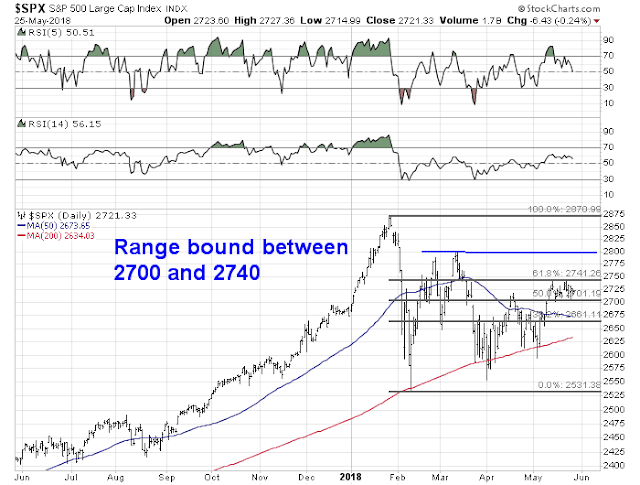 Small cap stocks, as measured by the Russell 2000, remains the market leaders as they staged upside breakouts to fresh highs and the index has held above the breakout level. However, the relative performance chart (bottom panel) shows that small caps are in the middle of an upward sloping relative uptrend channel and have little information about short-term direction. My inner trader is still watching for a test of the channel as a possible buy signal. 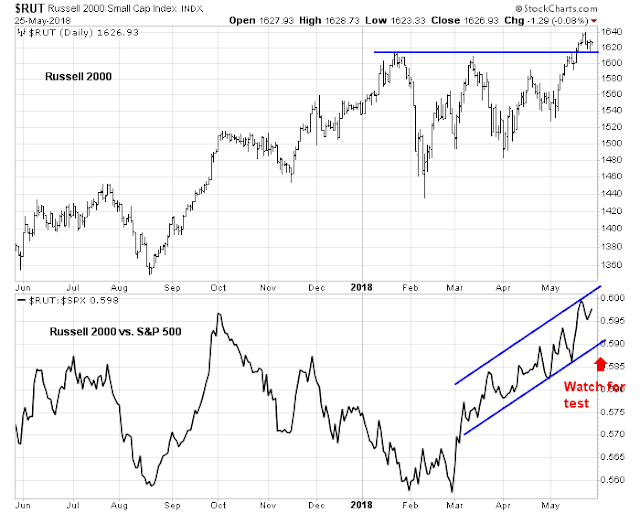 Stock prices are likely to grind higher into the summer months, and my inner investor is bullishly positioned. My inner trader has partial long market positions, and he is prepared to add to them on pullbacks.

1 thought on “Could a weak consumer stall the economy?”