Cue the fiscal and inflation fears – Humble Student of the Markets

Was the recent big tax cut not enough? CNBC reported that President Trump is proposing further tax cuts before November. He went on to pressure Congress to enact funding for his budget priorities on Twitter. 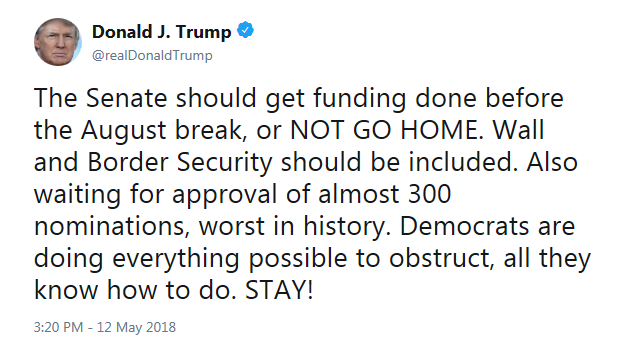 These actions prompted Steve Collender (aka @thebudgetguy) to declare in a Forbes article that Trump May Be The Most Fiscally Reckless President in American History:

But think about why Trump is asking for rapid action on the 2019 appropriations: He wants even more spending. Even though his policies have spiked the annual budget deficit to a new normal of a $1 trillion (with $2 trillion definitely within view) and interest rates are now starting to go up in large part because of his out-of-sync-with-the-economy stimulative fiscal policy, Trump is demanding that federal spending and the government’s red ink be increased even further.

There was no hint in this or any other subsequent tweet that Trump is going to propose offsetting spending cuts (or, heaven forbid, revenue increases) to compensate for the additional spending he’s demanding.

Trump’s recently-announced rescission package (which is already in a great deal of political trouble with congressional Republicans) doesn’t come close to offsetting the new spending Trump said he wants. It also won’t come close to being an offset even if the first package is followed with that second rescission plan Trump has said is coming, but which so far seems to be totally imaginary.

Here at Humble Student of the Markets, I believe that the determination of the proper path of fiscal policy is above our pay grade. Instead, my focus is on positioning portfolios for any changes in government policy.

Steve Collender is not the only one to raise the alarm about the US fiscal position. The IMF also expressed concerns, as the US is the only major industrialized country projected to see increases in its debt-to-GDP ratio. 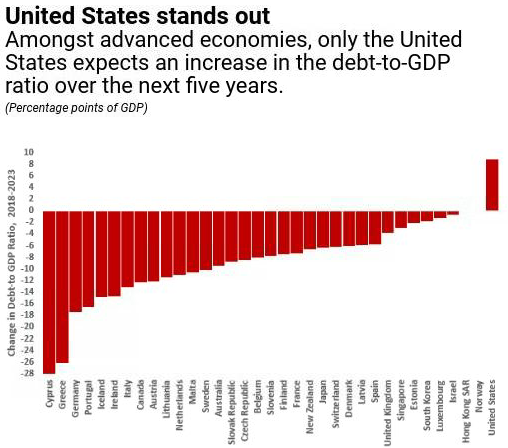 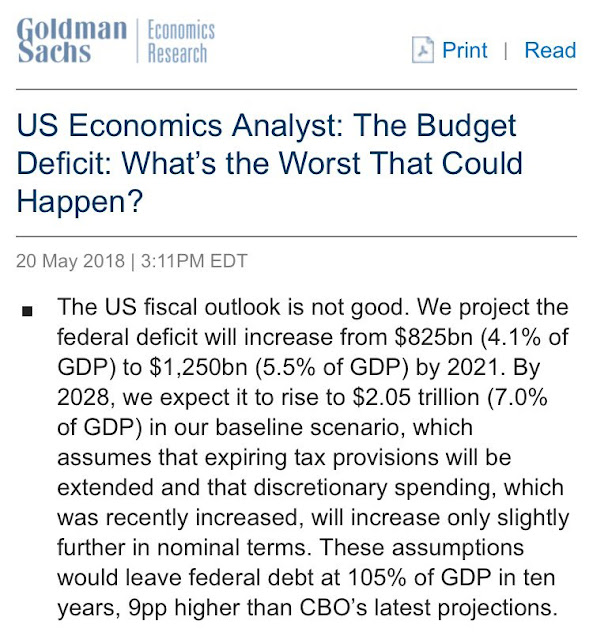 Federal debt is just the tip of the iceberg. Bridgewater Associates recently published a chart of out of control IOUs. 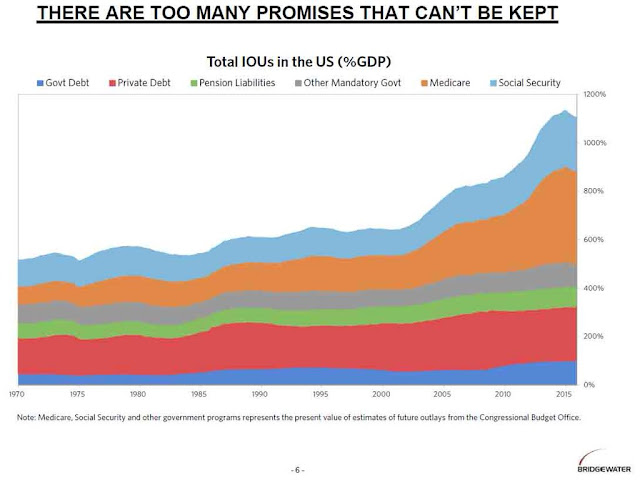 The usual solutions to runaway debt are either default or inflation. For a country whose currency is a major global reserve currency, the easy answer is inflation. Already, the latest update from Markit shows rising inflationary pressures. 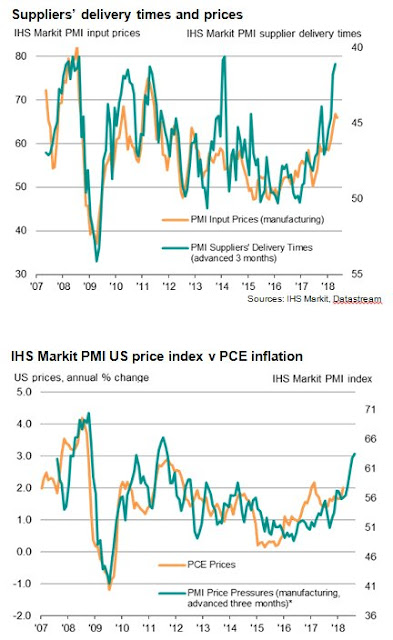 The latest FOMC minutes added fuel to the inflation fire by affirming the symmetry of the inflation target at 2% and signaling a tolerance for an overshoot [emphasis added]:

With regard to the medium-term outlook for monetary policy, all participants reaffirmed that adjustments to the path for the policy rate would depend on their assessments of the evolution of the economic outlook and risks to the outlook relative to the Committee’s statutory objectives. Participants generally agreed with the assessment that continuing to raise the target range for the federal funds rate gradually would likely be appropriate if the economy evolves about as expected. These participants commented that this gradual approach was most likely to be conducive to maintaining strong labor market conditions and achieving the symmetric 2 percent inflation objective on a sustained basis without resulting in conditions that would eventually require an abrupt policy tightening…It was also noted that a temporary period of inflation modestly above 2 percent would be consistent with the Committee’s symmetric inflation objective and could be helpful in anchoring longer-run inflation expectations at a level consistent with that objective.

Regardless of my personal beliefs about the correct path for US fiscal and monetary policy, I believe investors in an era of rising fiscal tension and rising inflationary expectations should be buying inflation hedge vehicles for protection.

I have two suggestions. The classic inflation hedge is gold. From a technical perspective, gold has been basing since 2013, and in an uptrend that began in early 2016. More remarkable is the resilience of gold in the face of recent USD strength, which has shown an inverse correlation to bullion. 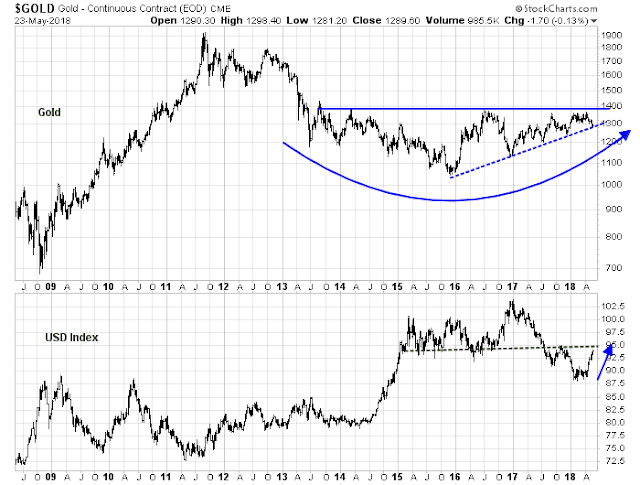 Although my short-term forecast is uncertain, I have a long-term one. Eventually, the Federal Reserve will lose control of inflation expectations. When that happens, owning TIPS might not be a winning trade in absolute terms, but rather simply offer relative protection versus traditional bonds from a rising inflation environment. If you want to profit from this widening, you need to have the other side of the trade on too. You have to be long TIPS, but also short Treasuries. Owning TIPS outright is not good enough.

Muir went on to outline two ways of trading inflation expectations. One is to buy TIP and short a Treasury ETF (IEF or TLT) at the right hedge ratio. The other is to buy an illiquid inflation expectations ETF (RINF) with a high (3.87%) gross expense ratio. Please note that the accompany chart showing a long TIP and short IEF position is for illustrative purposes only as it takes duration risk and therefore not interest rate neutral. 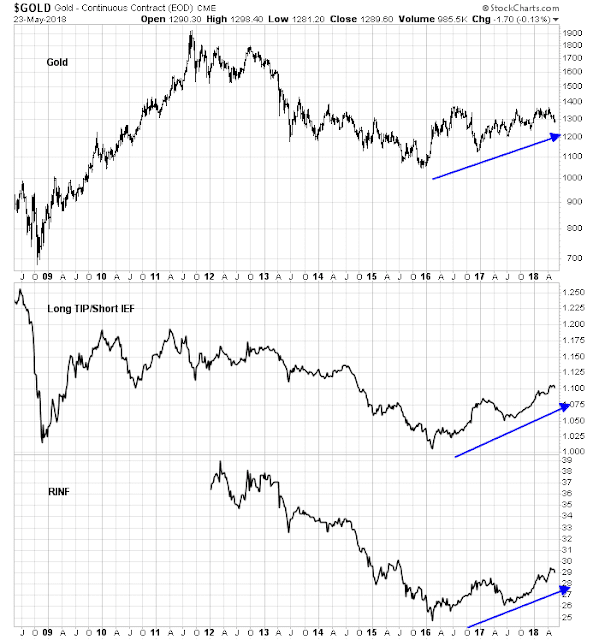 None of these hedges are perfect. You pay your money and take your chance.

1 thought on “Cue the fiscal and inflation fears”