Mid-week market update: What should we make of the stock market now that the 10-year Treasury yield has breached the 3% level? Should we pay attention to the JPM Asset Management historical analysis which stated, “When yields are below 5%, rising rates have historically been associated with rising stock prices”? 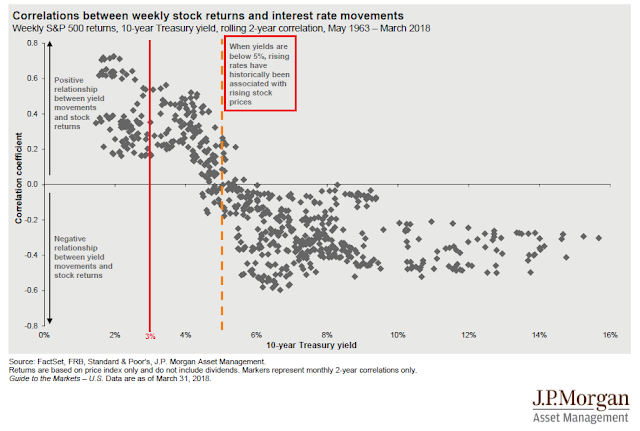 Should we pay attention to the latest BAML Fund Manager Survey, which concluded that the median manager is not overly worried until the 10-year yield crosses 3.5%?

Up until now, good (economic) news has translated to good (stock market) news, and bad news has been bad news. At some point, market perception will shift to putting greater weight on the bearish factors behind higher growth because of the expectation of a more hawkish Fed response, over the bullish factors behind better earnings growth.

Is the market at that turning point when good news is bad news, and bad news is good news?

The Q1 GDP report this Friday provides an important litmus test of whether that inflection point has been reached. Supposing that GDP growth comes in at better than expectations. Will stocks rally because of higher growth expectations, or drop because higher growth will pressure the Fed to raise rates at a faster pace? Similarly, what if growth came in at below expectations?

What about the yield curve? Will it steepen or flatten in response to the GDP report?

Consider the market expectations of preliminary Q1 GDP, which is schedule to be released Friday morning. The market consensus is a growth rate of 2.0%, which is equal to the Atlanta Fed’s nowcast and below the New York Fed’s nowcast of 2.9%.

Market expectations have been racheted downwards because of seasonal problems. Jim O’Sullivan, who has been one of the most accurate economic forecasters in the last 10 years, recently highlighted the below seasonal trend of Q1 growth rates. 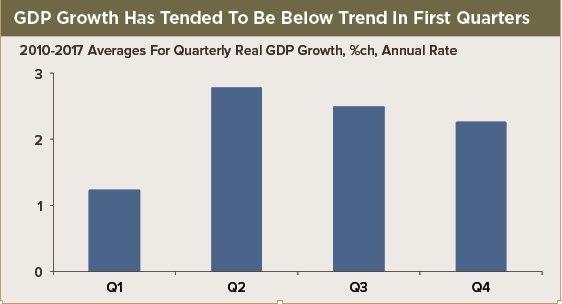 On the other hand, expectations may have fallen too much. Brian Gilmartin at Fundamentalis recounted a discussion he had with David Ranson:

On another topic, further to our recent conversation, there was a bit of a bombshell Thursday morning from the Bureau of Economic Analysis. Real intermediate output grew at a rate of 7½ percent in the fourth quarter. This is a strong leading indicator of GDP, but the neat thing is that hardly anyone is watching it! The news implies an extremely strong start to GDP growth this year – probably overriding the drag from capital-market turbulence. 2018 has begun on an unexpectedly strong note that investors haven’t yet had a chance to recognize, forecasters remaining pessimistic. I see chances for 3+ percent growth in 2018 – or even 3½ percent – greatly strengthened. More specifics available shortly.

Years ago, I worked for Batterymarch chief executive Tania Zouikin, who had been Ranson’s partner at Wainwright Economics, and I am familiar with his forecasting approach. Ranson uses real-time market data to forecast economic releases, because market data tends to be forward looking while other economic statistics have backward looking biases. That is a philosophy that I have adopted in my own work in incorporating technical analysis into my own top-down investment views.

If Ranson is right and Q1 GDP sees an upside blowout surprise, will stocks rally or deflate? That will be the litmus test of market psychology. The Fed has signaled that its base case is three rate hikes this year, with four hikes a definite possibility. The probability of four hikes is rising quickly. 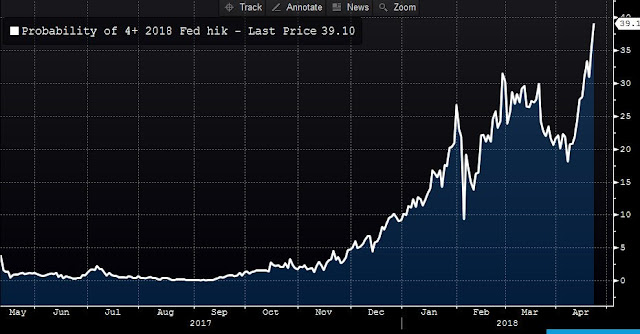 Is the market underpricing or overpricing the Fed’s interest rate policy even as earnings have beaten expectations?

During the jittery sentiment, macro and technical conditions may be putting a floor on stock prices. Trade war fears are receding. Reuters reported that Trump said that there was a “very good chance” of a US-China trade deal, and Treasury Secretary Steve Mnuchin is expected to travel to China to negotiate the deal. In a separate Reuters report, Trump also said that NAFTA talks are going “nicely”, and Canada expressed optimism over changes in the auto rules content of the treaty.

Risk appetite indicators based on the credit market (high yield bonds) and stock market (price momentum) remain healthy. As another measure of risk appetite, I am also watching carefully the market reception of WeWork’s unsecured junk bond offering (analysis via FT Alphaville).  which is a financing from a “sharing economy” company with negative cash flows. 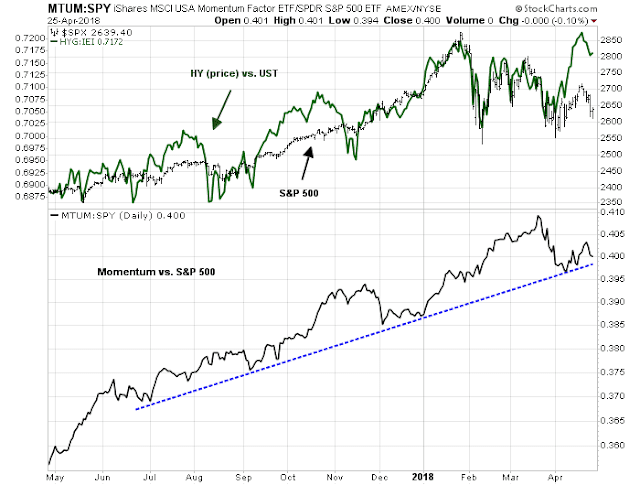 There may be further good news from the option markets. Bloomberg reported that the realized volatility of weak balance sheet companies are lower than strong balance sheet companies, which may be a confirmation of the heightened risk appetite message from the credit markets for lower credit paper. That said, some caution may be needed in embracing this such a bullish interpretation, as the higher volatility of strong credits has been distorted by the turmoil in technology stocks, which tend to have clean balance sheets. 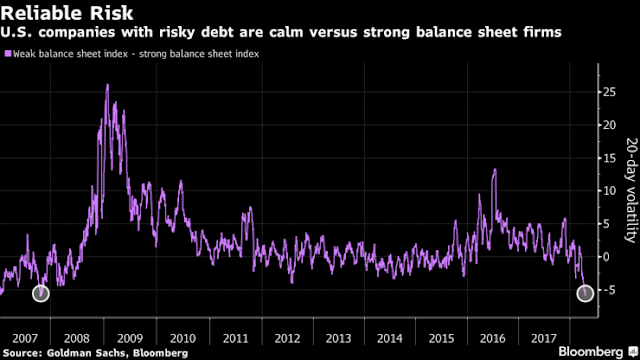 Twitter breadth, as measured by Trade Followers, has been trending positive for the last few weeks. In particular, bullish breadth has been rising even as the market consolidated sideways, which is bullish. 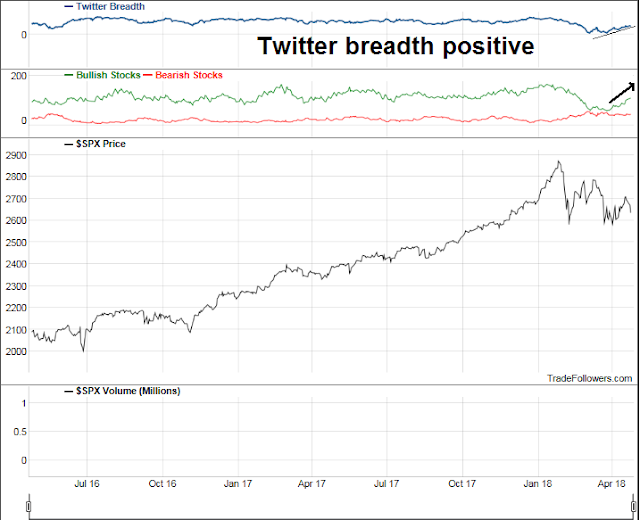 The market is flashing a mild oversold reading based on Tuesday’s close, and readings are likely to have improved based on today’s market action. 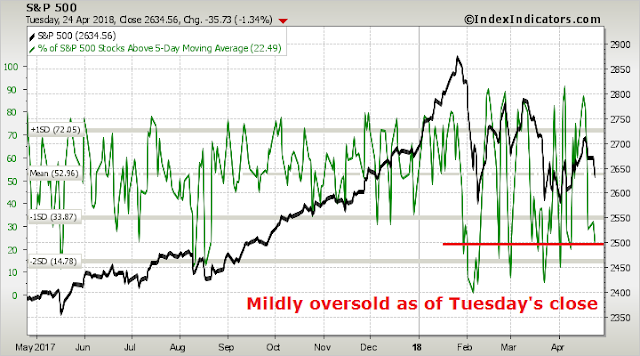 For now, the market remains range bound between its February low and March high. Until it breaks out of that range, market behavior is to be interpreted as choppy and consolidative. The bulls could even describe the recent price action as a bear flag, which is a consolidation pattern that breaks upwards.

My inner trader is inclined to give the bull case the benefit of the doubt for now. The market reaction to the Friday GDP report will be an important test of market psychology as a guide to future direction.