A house on fire? – Humble Student of the Markets 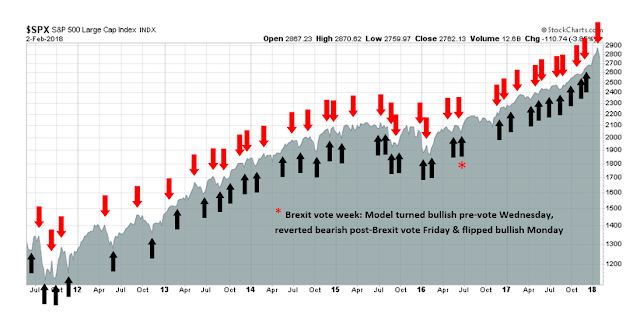 Buy the dip, but not yet

We had some minor excitement in our household in the last week. We were at a show when I received a frantic text message that the neighboring building was on fire. Fire fighters were spraying our building as a preventive measure. Mrs. Humble Student of the Market rushed home to rescue the family dog. The house next door was burning to the ground and we were ordered to evacuate. We discovered the next day that our unit suffered water and smoke damage, and it would take several weeks to fix. While the whole episode was disconcerting, it was not a total disaster.

I am now living in a hotel and writing this publication on an older rescued laptop, so please forgive me if I am not up to my usual witty and erudite self. 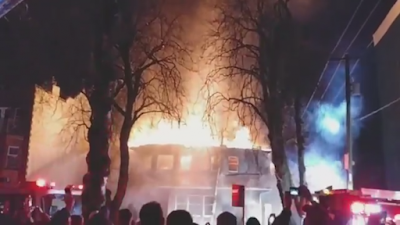 As the stock market turned south last week, some traders were behaving as if their own houses were on fire, instead of the neighbor’s. Morgan Housel recently penned a timely article entitled It’s hard to predict how you’ll respond to risk:

An underpinning of psychology is that people are poor forecasters of their future selves. There is all kinds of research backing this up. Imagining a goal is easy and fun. Imagining a goal in the context of the realistic life stresses that grow with competitive pursuits is hard to do, and miserable when you can…

The same disconnect happens when you try to forecast how you’ll respond to future risks.

How will I respond to the next investing downturn?

You will likely be more fearful when your investments are crashing and more greedy when they’re surging than you anticipate.

And most of us won’t believe it until it happens.

CNBC had a similar perspective. Investors have been so used to a low volatility environment where stock prices have risen steadily. When the market environment normalizes, it raises the risk of a sharp short-term selloff should long positions in weak hands panic:

Market volatility has been low, meaning that stock prices have been stable for a long time.

Some investors have interpreted this as a sign of current market risk and that there could be a sudden correction in stock markets, meaning many people could be about to lose vast sums of money.

Should the stock market crater from here, don’t panic. This is not the start of a major bear market.

No major bear in sight

The chart below shows the history of major stock market declines. Bear market has either preceded or coincident with past economic recessions. If there is no recession in sight, then investors should not expect a major decline to begin. The corollary lesson to this history lesson is equity investor should be prepared for regular 10-15% corrections. If you can’t stand that kind of risk, then you should probably reduce your equity allocation. 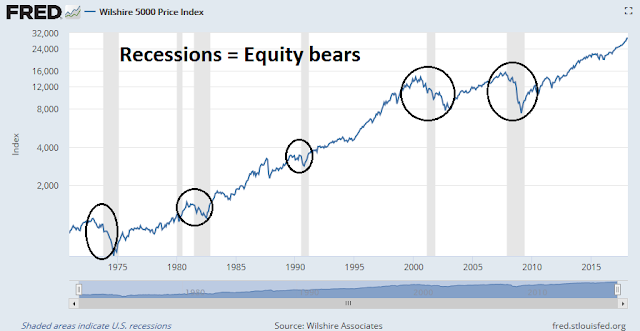 My conclusion comes from the analytical framework of the long leading indicators used by my Recession Watch page, divided into three dimensions to measure the strength of the economy:

As well, I consider the state of the market from a chartist’s viewpoint.

As consumer spending accounts for the vast majority of GDP activity, the health of the American household sector is the linchpin of economic health. On the surface, the household sector looks strong. As the chart below shows, retail sales have peaked well before past recessions. Current readings show that retail sales are strong. 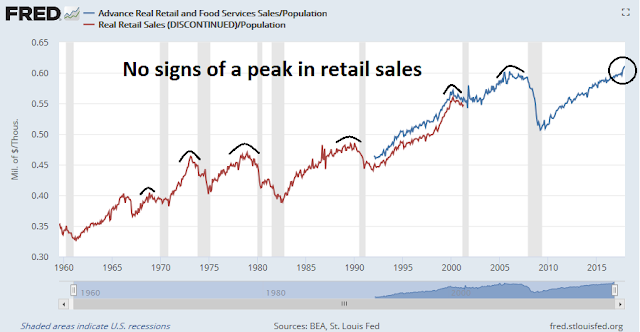 Some of the household internals, however, are not as healthy. Retail sales are only holding up because consumers are spending beyond their means through a combination of a falling savings rate and rising debt levels. 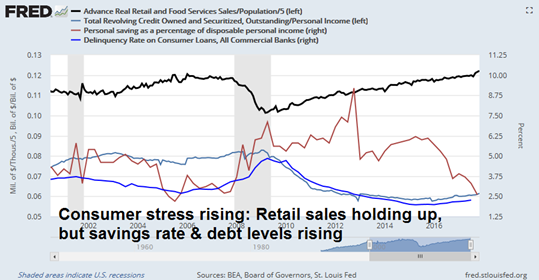 I am also concerned about housing, which is a consumer cyclical and one of the most economically sensitive sectors of the economy. Housing starts appeared to have plateaued. In addition, rising mortgage rates are also proving to be a headwind for the sector. 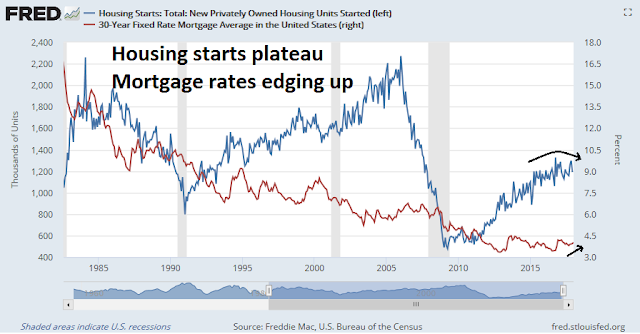 None of these readings are enough to sound the recession alarm, but they are indications of a late cycle expansion. 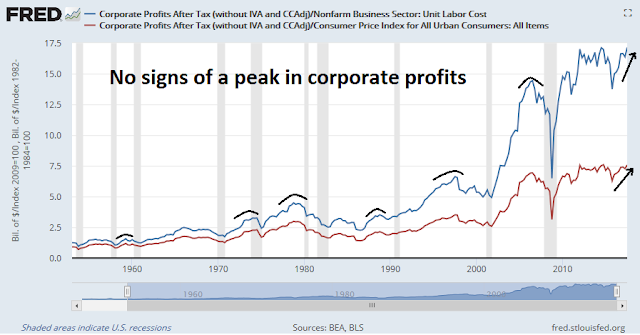 The latest update from FactSet also shows that strong profit expectations. Bottom-up forward 12-month EPS estimates have historically been coincident with stock prices, and they are rising at a robust clip. The latest round of EPS upgrades are driven by two components, a tax cut effect, and a cyclical effect. 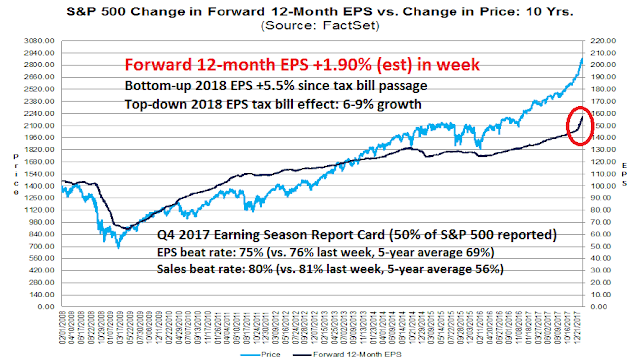 Bottom-up analysts have been hesitant to upgrade their estimates before the actual passage of the tax bill, because they could not quantify the specific effects on the companies in their coverage universe. The latest figures show that bottom-up analysts have raised their 2018 estimates by 5.5% since the passage of the tax bill. Top-down strategists have not been as shy about estimating the aggregate tax cut effects, and most Street strategists have penciled in a 6-9% tax cut boost to 2018 EPS. This suggests that the bottom-up tax cut upgrades are nearing an end.

However, the cyclical effects of earning season remains strong. Both the EPS and sales beat rates are well above historical averages. As the earnings reports were for Q4 2017, they did not include any actual tax cut effects. These reports suggest that the near-term operating outlook still looks strong.

Historically, corporate bond yields have bottomed several years before recessions. Here, the evidence is mixed. The Baa corporate yield made a marginal new low in December 2017, though the Aaa bonds did not make a low that month and the low in August 2016 still stands for the current expansion. 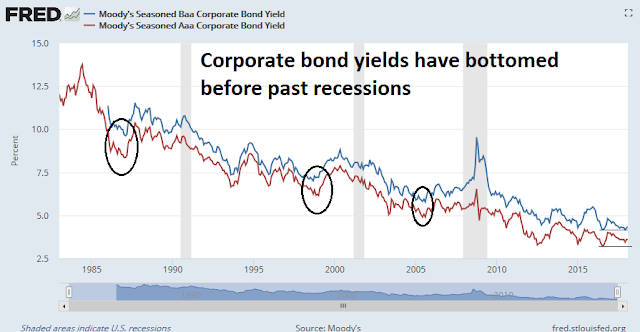 In conclusion, the corporate sector is not flashing any signs of an imminent downturn. In fact, the recently passed corporate tax cuts are likely to provide an additional boost to this sector.

Monetary conditions, on the other hand, are a question mark. The markets took fright on Friday in reaction to the January Employment Report. The headline Non-Farm Payroll came in ahead of expectations, and average hourly earnings rose to 2.9%, a cycle high reading that is indicative of rising wage pressures. 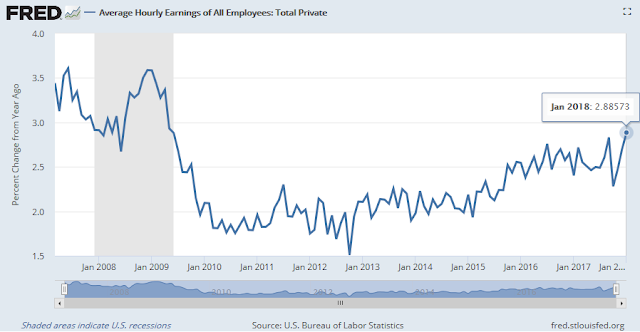 In addition, temporary employment growth may be stalling. Temp jobs have historically led headline NFP growth, and this raises the risk that the Fed may be committing a policy error by tightening into a weakening economy. 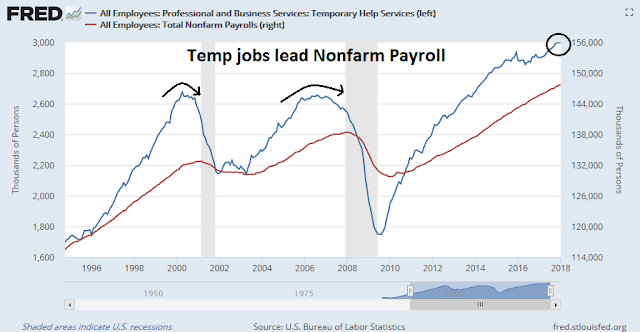 As the Fed signaled at its last FOMC meeting that it is on track for three or more rate hikes this year, money supply growth continues to decelerate. In the past, real money growth, as measured by M1 or M2, has gone negative ahead of recessions. 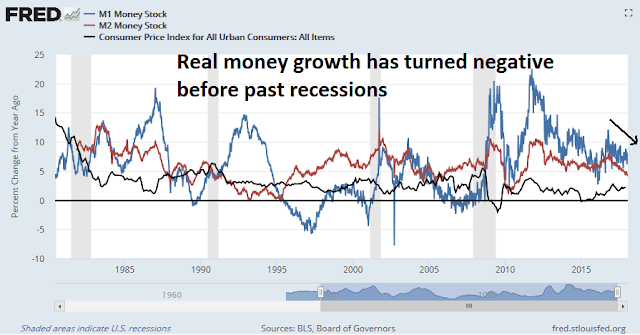 Lastly, no observation of monetary conditions as recession indicators without some comment about the yield curve. In the past, the 2-10 yield curve has inverted ahead of past recessions. However, the yield curve is giving unusual signals in this cycle. The chart below shows the history of the decline in the 10-year Treasury note yield from 1990. Every test of the downtrend line, with the exception of 1994-95, saw the yield curve invert. Even though the yield curve did not invert during the 1994-95 period, it did flatten quite dramatically. 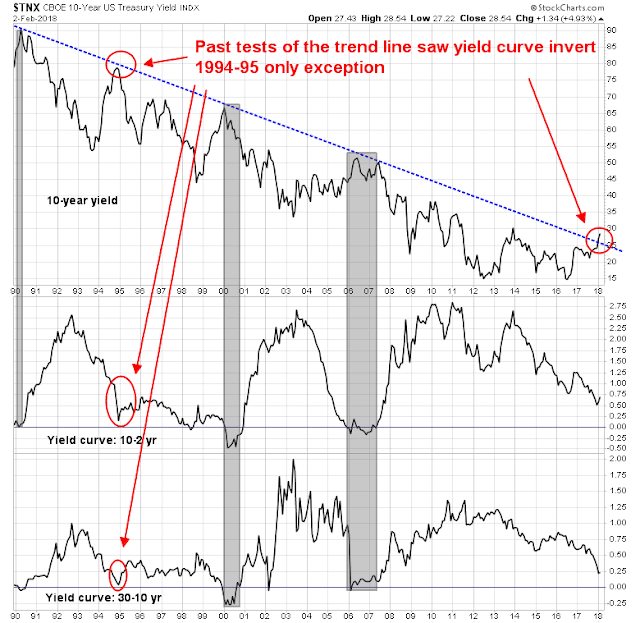 Friday’s market response to the January Employment Report saw the a dramatic rise in bond yields and a steepening yield curve. Another puzzle comes from the behavior of the 10-30 yield curve, which has been steadily flattening to 25bp, a cycle low.

I interpret these readings as tightening monetary conditions, but they are not indicative of an imminent recession.

To summarize the review of macroeconomic conditions, they indicate an economy that is in the late cycle of an expansion. While conditions are deteriorating, the nowcast of 12-month recession risk is still relatively low.

Even though the latest market air pocket may appear as a shock to recent stock investors, the S&P 500 has only retreated 3% off its all-time highs, and corrections are to be expected as part of equity investing. From a technical viewpoint, the intermediate term outlook is still bullish.

As the chart below shows, even though the S&P 500 breached its narrow rising channel last week, its uptrend remains intact. Moreover, equity risk appetite, as measured by the price momentum factor and high beta vs. low volatility factor spread, remain in relative uptrends. Initial trend line support is evident at about the 2700 level, which represents a peak-to-trough correction of roughly 6%. 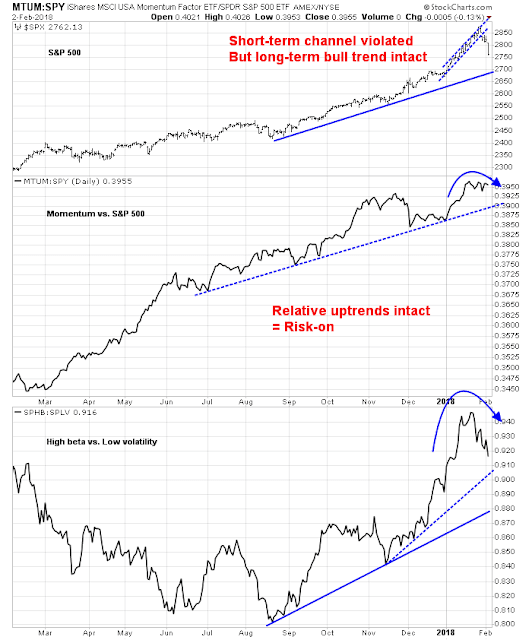 For a longer term and global perspective, past equity market tops have been characterized by double tops consisting of an initial top, market retreat, and a second rally marked by negative 14-month RSI divergences. As the chart of the DJ Global Index shows, the latest correction may be a sign that the market is making the first top. Even then, investors should not panic until this technical formation becomes more developed. 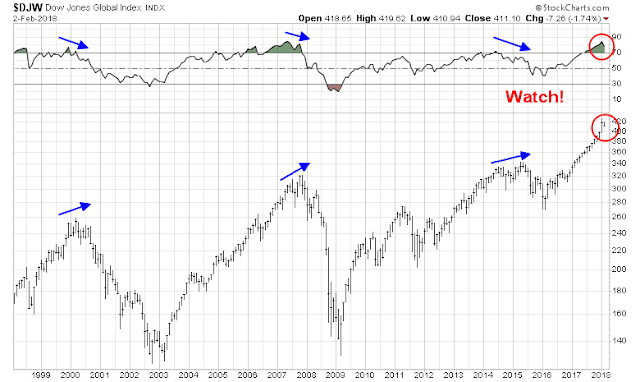 In short, the market is undergoing a garden variety correction. Equity weakness represents an opportunity to buy the dip.

The week ahead: Not enough fear

However, it is likely too early to be buying immediately. Late Friday, there was some chatter by the talking heads that the market had become extremely oversold. While short-term breadth had become oversold and a bounce is likely in the coming week, there are few signs of widespread fear and capitulation that are the hallmarks of a durable bottom. 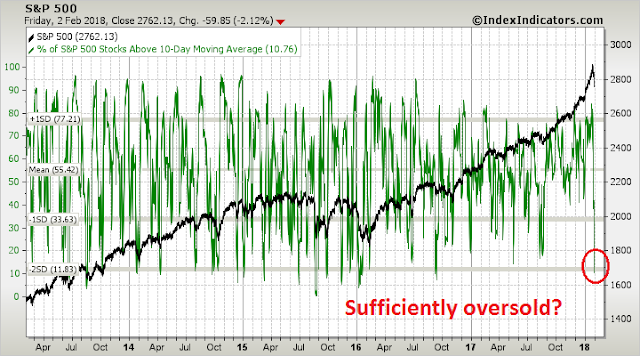 As the chart of the CBOE equity-only put/call ratio shows, the market had been sliding into complacency for several months. It’s hard to believe that a single one-day 2% decline after a steady climb marks the end of the correction. 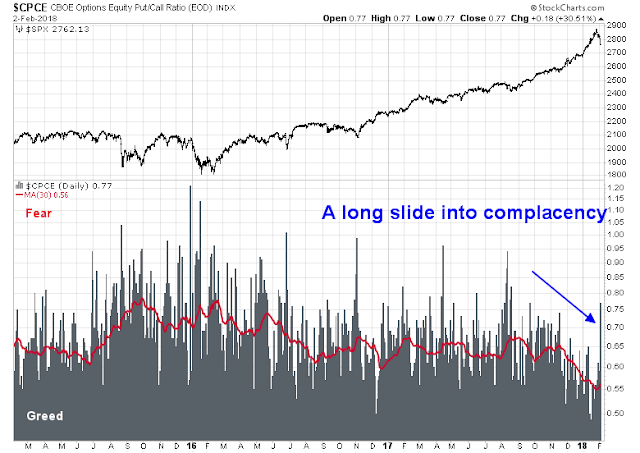 SentimenTrader also observed that small (retail) option traders were buying heavily into the latest decline. That does not sound like fear and capitulation to me.

The S&P 500 is oversold on RSI-5, which is a short-term indicator, but not oversold on RSI-14, which is more useful for traders with an intermediate term time horizon. Moreover, the market has not tested initial support at the 2680-2720 region, defined as the 50 day moving average and a trend line representing a peak-to-trough correction of about 6%. Further support can be found at the 200 dma and a second trend line at about 2550, which represents a 10% correction. 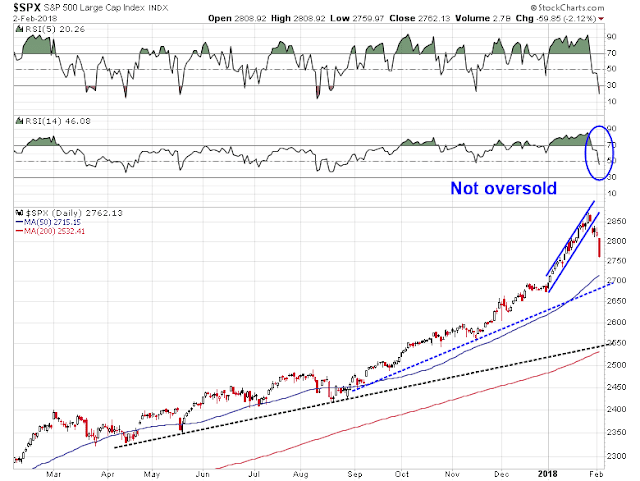 As well, the Fear and Greed Index has fallen, but readings are nowhere near the sub-20 levels seen in past bottoms. 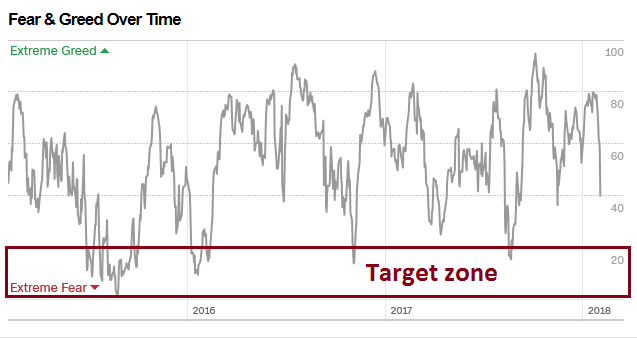 Here is what I am using to watch for a durable market bottom. I rely on my Trifecta Bottom Spotting Model, which has had an uncanny record for identifying trading bottoms using the following three indicators: 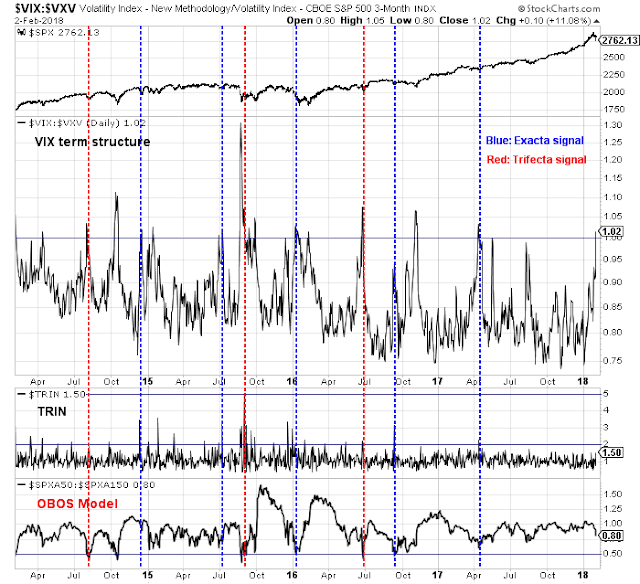 Current conditions suggest that the market is sufficiently short-term oversold that it could bounce next week, but prices are likely to retreat further and retreat further until sentiment gets washed out. We are not there yet.

My inner investor remains constructive on equities. My inner trader remains short, but he is prepared to add to his short positions should the market stage a rally next week.