Mid-week market update: The price action of stocks in the last few weeks makes it evident that US equities are awaiting the resolution of the Republican tax bill. This week will be critical for the progress of the bill through the House, as it is scheduled to be marked up in the Ways and Means committee. So far, the market verdict is not hopeful.

As the top panel of the chart below shows that high beta stocks rallied against low volatility stocks in September, followed by a range-bound market, indicating a lack of conviction. The bottom panel shows that this market has been mainly driven by momentum stocks. 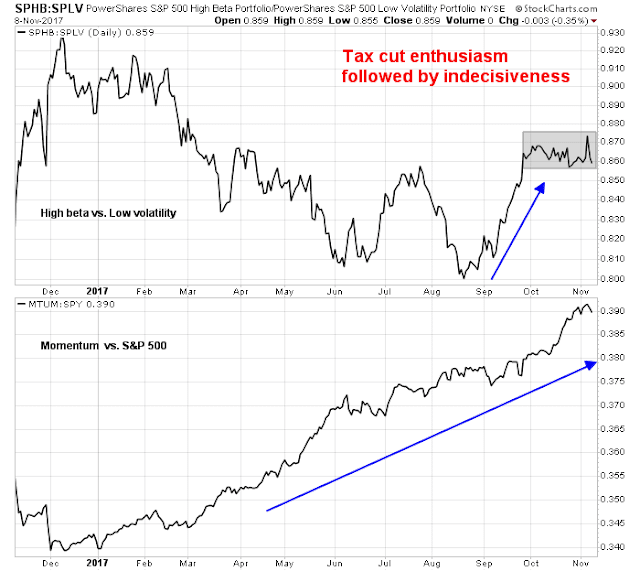 Other market internals are also flashing warning messages for the bulls. From a political perspective, the tax bill is also running into trouble. These are all signs of likely corrective action ahead.

From a technical perspective, the market does not look healthy. The recent advance is characterized by extremely narrow leadership of megacap and large cap NASDAQ stocks. Both mid and small cap stocks are underperforming, and the equal-weighted NASDAQ 100 (NDX) is tanking against the cap weighted NDX. 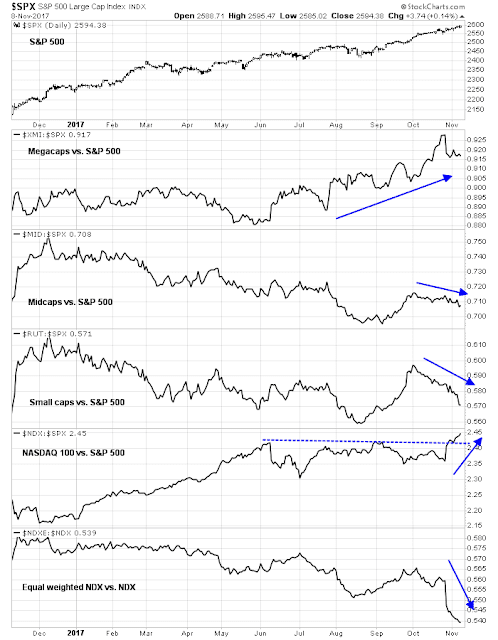 It could be argued that negative breadth divergence could last a long time with few ill effects on the major averages. A more immediate concern is the negative divergence in risk appetite shown by the credit market, where high yield and emerging market bonds are underperforming equivalent duration Treasuries, but stock prices continue to rise.

In addition, there are signs of complacency showing up in the option market. While the low level of the VIX Index is a concern, the term structure of the VIX has steepened to historical extremes, indicating excessive bullishness. 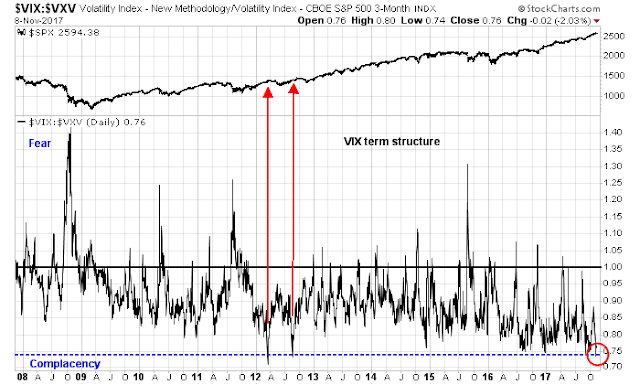 If the market is focused on the prospect of tax cuts, then the Republican tax bill is increasingly running into trouble on Capitol Hill. While the Democrats and other opponents may denounce the bill as a giveaway to the rich, CNBC reported that Fitch, which is a more credible third-party source, concluded that the proposed cuts “may lead to a short-lived boost to output”, but they “will not pay for themselves or lead to a permanently higher growth rate”. Moreover, “Fitch believes the tax package will be revenue negative, even under generous assumptions about its growth impact”.

The longer the bill gets discussed, the more likely it will fail, as the delay allows third parties to study the bill and raise objections. The opposition by the National Association of Realtors and National Home Builders Associations over the mortgage interest deduction is well known. Other bombshells have emerged, which could create widespread opposition, such as:

I pointed out before (see Peak small cap tax cut euphoria) that the effective corporate tax rate is substantially below the stated statutory rate. Depending on how the tax loopholes are closed, and the eventual statutory rate, companies may in some instances end up with a tax increase, rather than a tax cut. 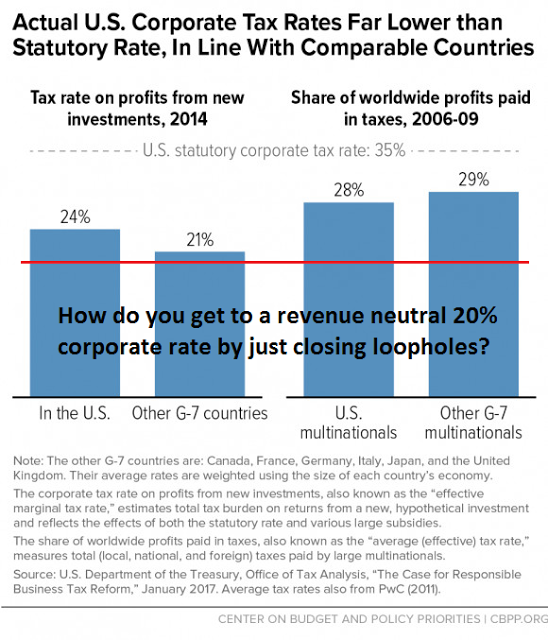 The latest WSJ report from Tuesday night showed that GOP lawmakers had retreated and the House tax bill is at least $74 billion over the $1.5 trillion limit specified by the Byrd Rule. Even if the excess gets resolved, the tax proposals face another fight in the Senate, where the Republicans hold a slim two vote majority.

In short, the GOP tax bill faces many hurdles. Despite all of the progress so far, a football analogy would put them at first and 10 on their own 35 yard line. At this rate, even the prospect of a field goal is in doubt.

My base case scenario calls for a short-term correction, based on the combination of technical deterioration, and the likely perception of a tax bill failure. The intermediate term outlook is still bullish, as the growth outlook remains upbeat.