The tax reform jitters correction? – Humble Student of the Markets 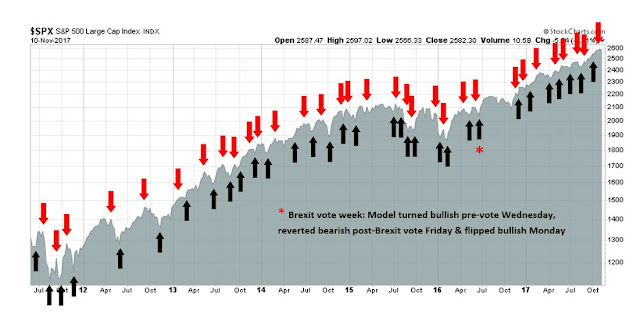 This was the week that jitters over the Republican tax bill finally caught up with stock prices. Now that both the House Republicans and Senate Republicans have different versions of a tax bill, the market is waking up to the challenges ahead.

Even before stock prices got spooked, the market showed signs it was ready to go down. There were cautionary signals from risk appetite indicators, which signaled rising skepticism over the passage of any tax bill. The top panel depicts the relative performance of high beta vs. low volatility stocks as a metric of risk appetite. Risk appetite perked up in September as the odds of a tax cut became more likely, then flattened out into a range. This pair broke down through a relative support on Friday. The other pairs show the relative performance of “champagne” stocks Sotheby’s (BID) and Tiffany’s (TIF) against the market. The “champagne” stocks have been underperforming the market for the last few months, which is another sign of market skepticism that much was going to be accomplished on the tax bill. 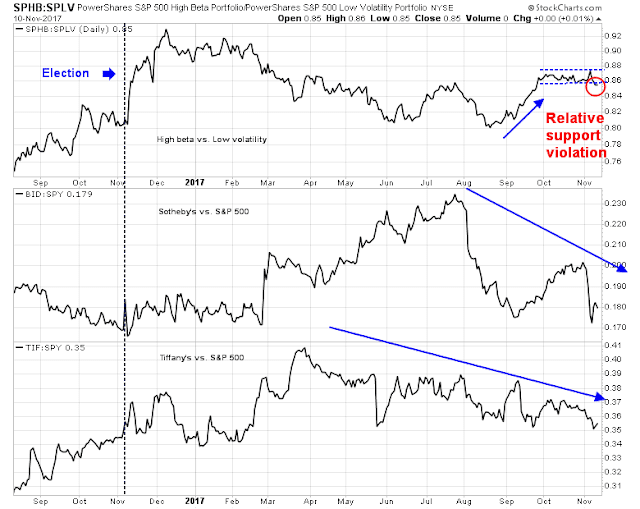 As well, the latest update from John Butters of FactSet shows that the market reaction to earnings reports may be showing signs of bullish exhaustion. EPS beats were barely being rewarded, while misses were severely punished (annotations are mine). 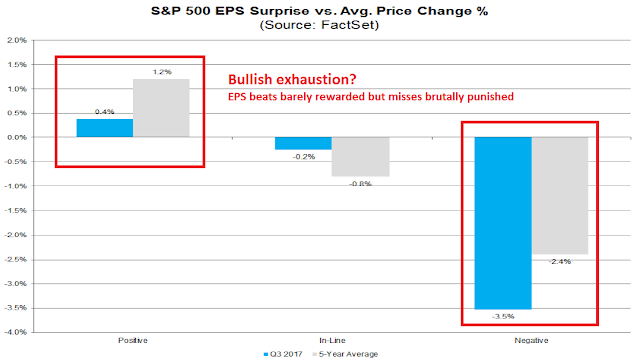 Bloomberg published a good summary of the challenges that the GOP faces in reconciling the House and Senate versions of the tax bill. Both chambers have boxed themselves by generating $1.5 trillion in deficits over 10 years, but different tax breaks and revenues sources in both bills. The reconciliation process will have to make the difficult choice of deciding which provision to keep (and add) in order to add up to a final $1.5 trillion deficit.

“That’s a hole that Hatch and the other Senate Republicans are going to have to fill,” Traub said. “And how they fill it may not be very attractive to House Republicans. It’s an unenviable challenge they face.”

On the House side, last-minute changes to the bill before it cleared the Ways and Means Committee on Thursday pulled its price tag under the $1.5 trillion allowed in the first decade under the budget resolution.

“Today, the first and oldest Committee in Congress passed transformational tax reform legislation that charts a new course for the country,” Ways and Means Chairman Kevin Brady said after his panel approved his tax bill.

To get there, the panel appears to have employed a touch of fiscal finesse: The single biggest source of new revenue in Brady’s changes stems from a revision that wouldn’t take effect until 2023 — raising questions about whether Republicans in Congress would ever really let it happen.

Then they have to appease the deficit hawks in the Senate as they navigate their fragile two seat majority:

Three senators have already raised concerns about tax cuts that increase the deficit, including Senator Bob Corker of Tennessee, Senator James Lankford of Oklahoma and Senator Jeff Flake of Arizona. “I remain concerned over how the current tax reform proposals will grow the already staggering national debt,” Flake said Thursday, calling for a “fiscally responsible” bill.

The Republicans may also be driven by an increasing sense of panic. Cristina Marcos of The Hill reported that one House Republican admitted that donations are likely to dry up should the tax reform bill fail. Falling political contributions would reduce their chances of retaining control in the midterm elections next year.

Moreover, the special Senate election in Alabama on December 12 to choose Jeff Session’s successor may represent a key deadline. Republican candidate Roy Moore has been accused of sexual improprieties with minors, and the news has split the Party. While there has been an outpouring of support for Moore, Politico reported that the National Republican Senatorial Committee has withdrawn its financial support for Moore’s campaign. Three GOP senators, Bill Cassidy of Louisiana, Steve Daines of Montana, and Mike Lee of Utah, have rescinded their endorsement of Moore. More importantly, Donald Trump put out a press statement distancing himself from Moore:

As the news of the scandal broke, the latest poll showed that his Democrat opponent Doug Jones had pulled even with Moore in support, which is highly unusual in a state that has leaned deeply red like Alabama. Should Moore lose the special election, it would erode the Republican majority in the Senate to a single vote, even as the leadership tries to manage the opposition of maverick senators such as Corker, Flake, Lankford, McCain, and Collins.

Even before last week’s market weakness, the stock market’s technical internals were looking rather unhealthy, as market breadth has shown signs of deterioration even as the index rose. 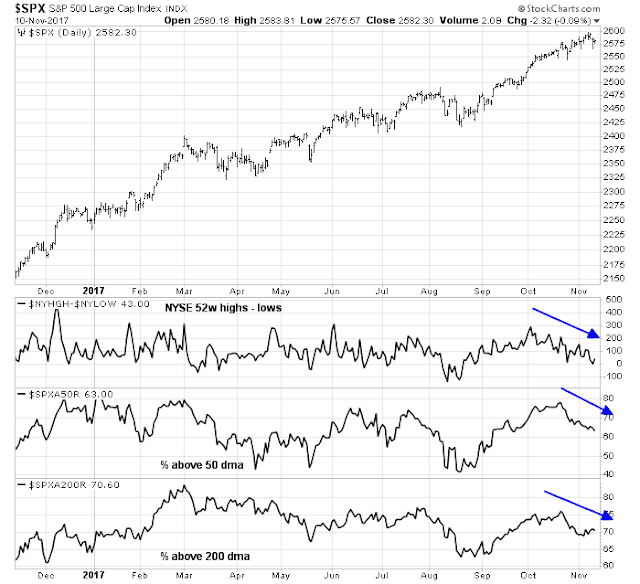 It could be said that market breadth is an imperfect timing tool. Negative divergence can exist for months before the major averages drop. The credit markets is another matter. Jeff Gundlach issued a series of warnings based on the action of the junk bond market. 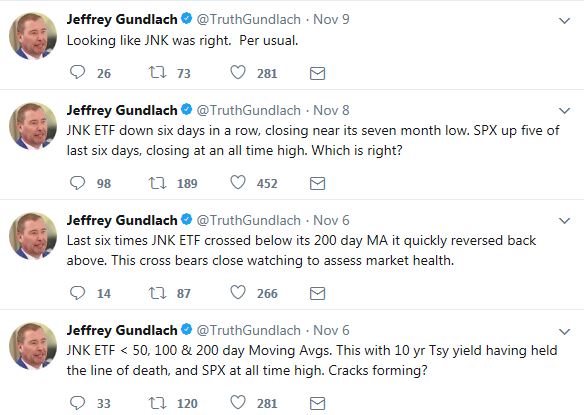 While Gundlach highlighted the negative price action of junk bond, or high yield (HY), ETFs, I prefer to focus on the relative price action of HY bonds to equivalent duration Treasury paper, which neutralizes the interest rate effect to analyzes the credit spread effect (see The market`s report card on the GOP tax bill).. As the chart below shows, credit spreads were not only rising in the HY market, but investment grade corporates and EM bonds too. Even though HY and EM bonds recovered a bit on Friday, IG relative performance continued to deteriorate, indicating that further stress is likely ahead.

Indeed, the approach of using HY to measure risk appetite can be useful as a confirmation signal. The chart below shows the history of equities and the relative performance of HY to UST. With the exception of a brief episode in late 2014 when energy related HY dragged down the performance of the sector, the two series have been highly correlated in the last 10 years. 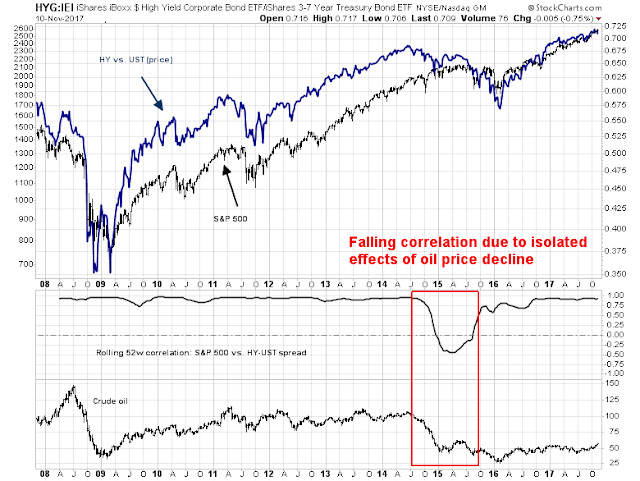 Don’t panic, it’s only a correction

Even if the tax bill were to fall apart and stock prices sell off, I would be inclined to buy the dip, as the intermediate term outlook is still bright. Fundamental momentum remains positive, which is bullish. FactSet reports that, with Earnings Season nearly over, EPS and sales beat rates are well above historical averages, and forward EPS is rising robustly, indicating Street optimism about the earnings outlook for 2018, even without tax cuts. 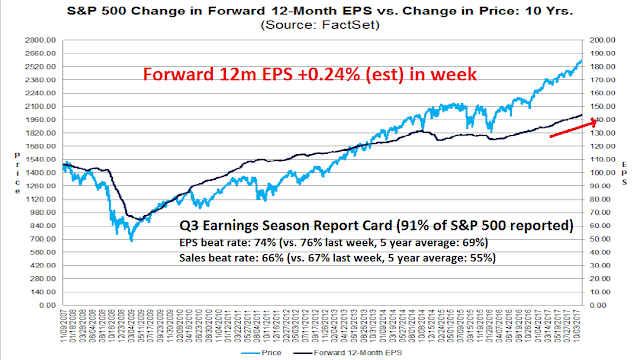 From a top-down perspective, the nowcast of the economy is upbeat. Initial jobless claims has shown a remarkable inverse relationship with stock prices in this expansion, and claims continue to fall. 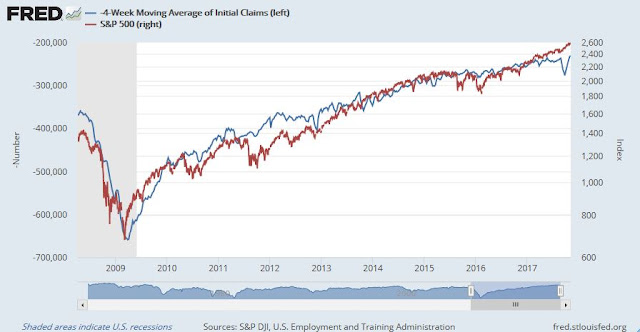 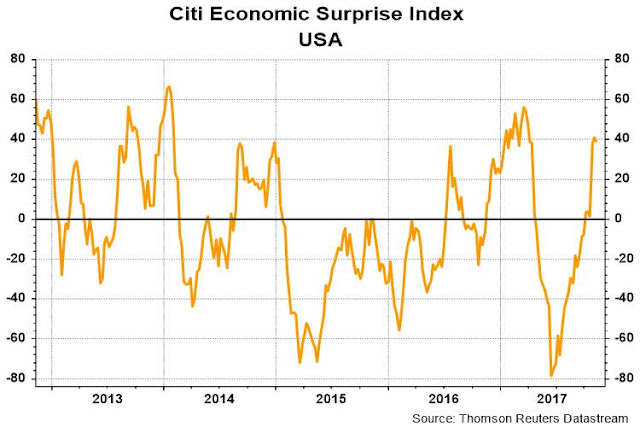 The upturn is global, and not just isolated to the US. 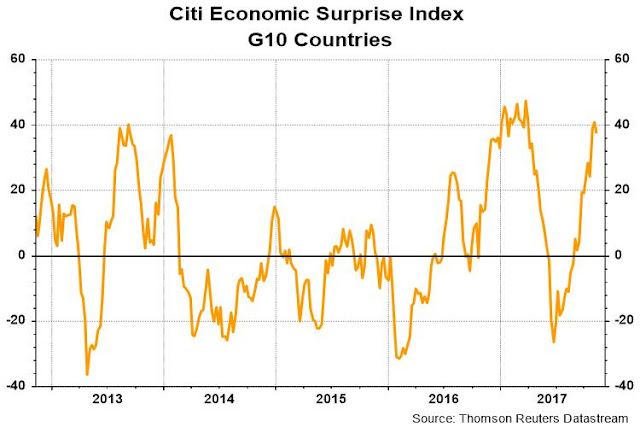 My inner investor would therefore regard any significant weakness in stock prices as a buying opportunity.

If we were to assume this is the start of a long awaited correction, then most indications suggest that it is not over. Short term indicators have not reached oversold and fear levels consistent with bottoms. After the SPX breached its uptrend line late last week, I am now watching both the RSI-14 to see if it can reach a minimum target of 50, and the VIX Index to see if it can breach the upper Bollinger Band (BB), which would flash an oversold condition. 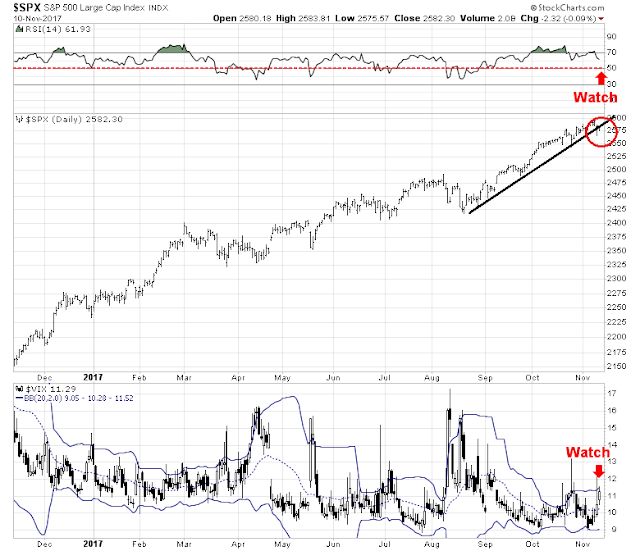 Short term breadth indicators from Index Indicators are nowhere near an oversold reading. 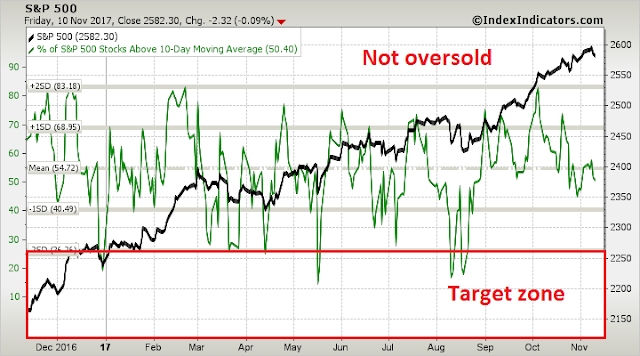 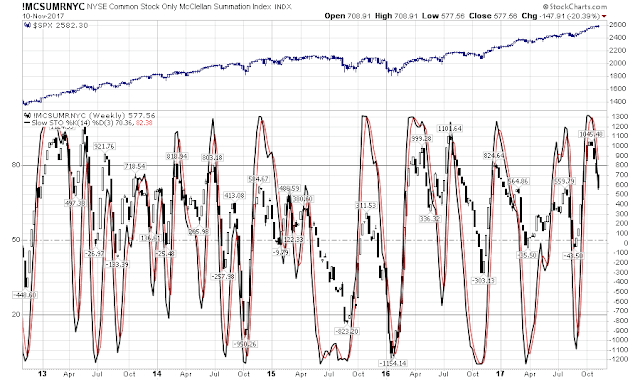 The Fear and Greed Index stands at 54, and the market has historically not bottomed until it has fallen to 40 or less. 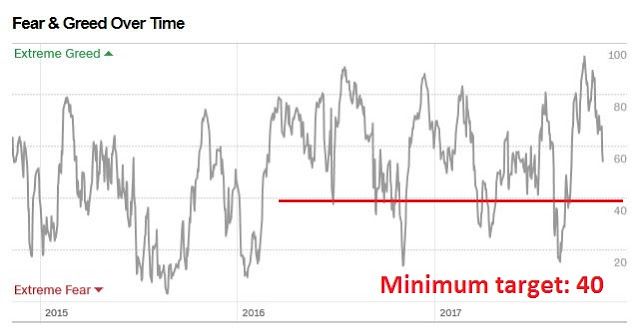 My inner investor remains neutrally positioned, with his stock and bond weights at roughly their investment policy weights. My inner trader is short the market, and waiting for oversold conditions to materialize before he covers his position.