A market volatility update – Humble Student of the Markets

It’s time for an update, and it spells caution for the bulls.

I don’t consider my job to judge whether the Mueller indictments are right or wrong, whether it is a legitimate act of government inquiry or simply a political witch hunt. My job is to consider their effects on the market.

It is unclear how much of an effect the Mueller indictments had on presidential approval. Gallup shows Trump’s approval rating fell to to a low of 33% before recovering to 35% on Tuesday.

NDR Research has found that stocks don’t perform well when presidential approval falls to 35% (annotations are mine). 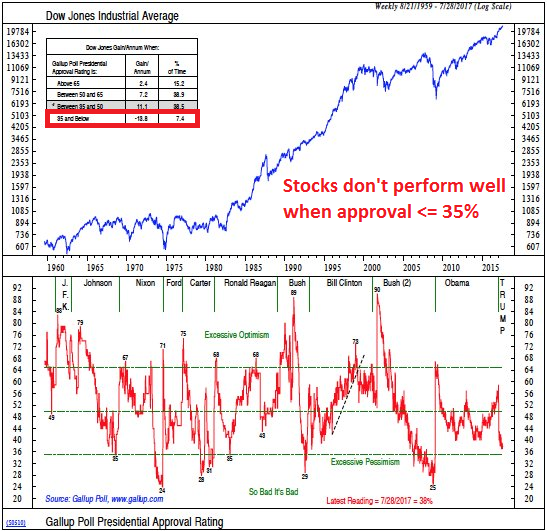 Here is a more recent chart from Bespoke showing stock market performance and presidential approval that show a similar effect (annotations are mine). 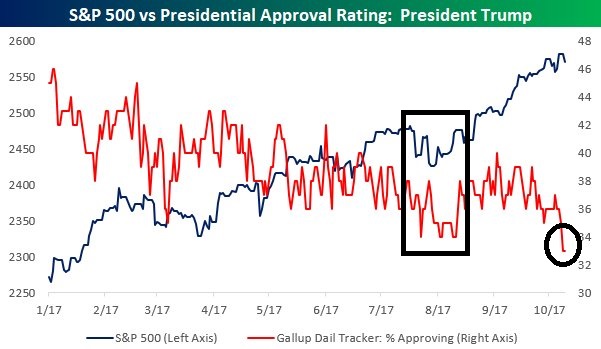 The markets got spooked on Monday when news leaked that the GOP was considering a phase-in of a corporate tax cut to 20%, indicating that stock prices are being held up by the expectations of a tax cut. The latest news indicates that the House tax plan unveiling is delayed until tomorrow (Thursday). Politico reported yesterday that the House Republicans are still having trouble figuring out how to pay for their tax cut wish list without a firestorm of special interest opposition:

But not 24 hours before the bill’s big reveal, lawmakers had yet to settle on one of the most sensitive questions of all: How to pay for their proposed $5.5 trillion in tax cuts, since any major revenue-generator is certain to antagonize some powerful lobby or group of lawmakers who could defeat it.

I have no idea of how much of the potential effects of any tax cuts has been discounted. However, there are a couple of ways of measuring the market reaction to a tax plan. The top panel of the chart below shows the relative performance of the high beta ETF against the low volatility ETF. Based on the experience with the healthcare bill fiasco, high beta underperformed from late 2016 because the market believed no tax cuts were getting done. It only began to rally again in late August on the hopes of a tax package getting through Congress. 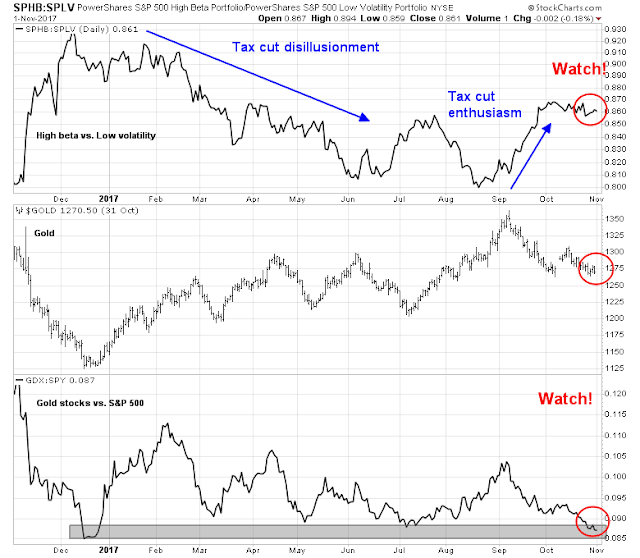 Another sure winner of any tax cut package would be gold prices, as the increases in fiscal deficits would be judged to be inflationary. The bottom two panels show the price of gold and the relative performance of gold stocks to the market. Both have been range-bound and shown little leadership characteristics. For some context, consider these comments from former IMF chief economist Simon Johnson:

Name the country. Its leader rails against foreigners, erects various import barriers, and pushes for low interest rates and lots of cheap credit for favored sectors. Government debt is already high, but the would-be strongman in power decides to pile on even more by increasing the budget deficit, arguing that this will boost prosperity to previously unattainable levels. While the government claims to represent the common people, state contracts are awarded to friends of friends.

Surprise! The answer is Argentina:

The answer, of course, is Argentina under Juan Perón, who was in power from 1946 to 1955 (and again briefly in 1973 and 1974), and many of his successors. One of the richest countries in the world around 1900 was laid low by decades of unsustainable economic policies that made people feel good in the short run but eventually ended in disaster, such as runaway inflation, financial crisis, and periodic debt defaults.

For now, the jury is still out on the GOP tax plan. But watch equity risk appetite and gold prices for the instant market verdict. Should the tax plan fail to materialize, or if it becomes apparent that it will not pass because it turns into ACA Repeal 2.0, then don`t be too surprised to see presidential approval fall further (see above analysis for the market consequences of ultra-low approval ratings).

As expected, the FOMC decision turned out to be a yawn. The Fed has hiked three times in the past 12 months, but financial conditions implies that they cut rates. They therefore remain on track to raise rates at its December meeting. 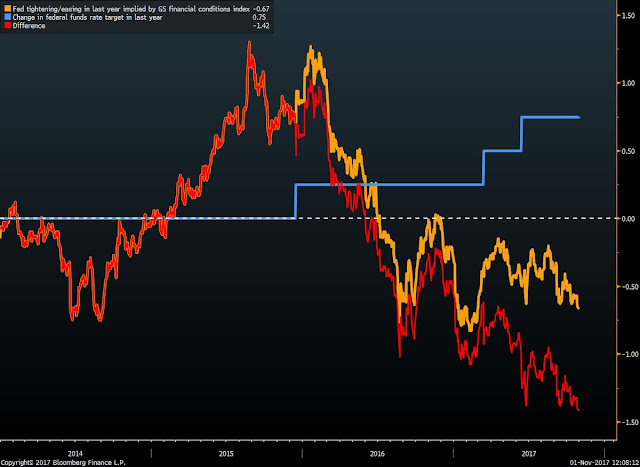 More importantly, the question of the future leadership of the Fed is unknown. Trump is expected to name the Fed chair tomorrow (Thursday). I have already written about what a Taylor Fed would look like, but there are a number of nuances that are unappreciated by the market.

The latest news indicates that Trump is likely to name Jay Powell as the new Fed chair. If true, then the initial market reaction would be euphoric, as Powell would largely represent the continuity of the Yellen Fed’s monetary policies. That said, there are a number of key differences between how a Powell Fed might operate compared to the Yellen Fed.

First, Powell differs from Yellen on regulation. FT Alphaville highlighted a recent Powell speech on Fannie Mae and Freddie Mac, where Powell blamed the mortgage melt-down on these GSEs, while FT Alphaville made the case that it was the private label mortgage insurers that was the main problem. Powell’s solution called for greater privatization of mortgage finance, and a shift of government guarantees from institutions such as Fannie and Freddie to mortgage securities. If Congress were to undertake such an initiative today, then we can expect greater downside volatility in the next crisis.

Business Insider also featured a revealing commentary about Powell, as he is a lawyer and investment banker, and not an economist, by training:

“He has been in line with the leadership on monetary policy in recent years,” Julia Coronado, a former Fed board economist who worked on Wall Street before founding the research firm MacroPolicy Perspectives, told Business Insider. “His comfort zone and leadership has been in getting his hands dirty on regulatory and financial sector plumbing issues. He is smart and collegial and knows how to lean on the staff’s expertise.”

She added he would probably be a different kind of Fed chair than Yellen “in that he will be forging a consensus more than driving it on monetary policy.” She continued: “His depth on financial infrastructure could come in handy if and when the FOMC needs to confront decisions on balance sheet policy again.”

Powell is likely to be a consensus builder on monetary policy. While he is not an economist, the combination of his experience in finance and his years as a Fed Governor will likely make him to initially adopt a stay the course policy of the Yellen Fed. Such a management style, however, indicates a subtle shift of more power to the other members of the FOMC. The market should therefore pay greater attention to the composition of the FOMC and the Federal Reserve Board of Governors. The voting rotation of the regional Fed presidents, from the dovish Evans and Kashkari to the more hawkish Meester and Williams, already guarantee a more hawkish FOMC in 2018.

Then there is the issue of the Fed Board. If Janet Yellen does not serve out the remainder of her term as a Fed governor, then there are five out of a possible seven open seats on the Board. It would be a golden opportunity for Trump to shape future Fed policy. Assuming that Trump focuses on Republican candidates, then there are very few candidates who are likely to steer the Fed in a direction that is more dovish that the current Yellen Fed (see A Fed preview: What happens in 2018?). Moreover, most Republican candidates are likely to favor a rules-based approach to monetary policy, which would push the Fed Funds target much higher than it is today.

On Monday and Tuesday, we got the latest on Personal Consumption, Savings Rate, and Employment Cost Index. As the chart below shows, increases in wages are not keeping up with personal consumption. As a result, households are running down their savings in order to finance their spending. 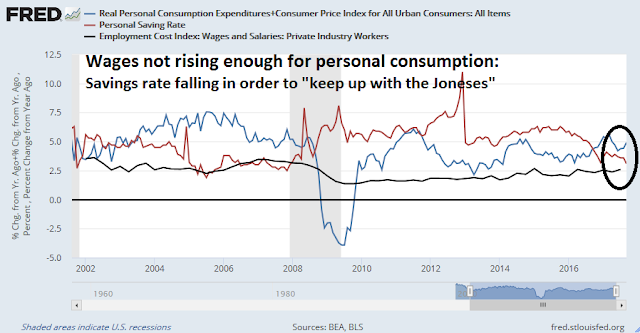 One alternative is to send more people in the household into the labor force. We will see an update of this in the Jobs Report on Friday, but with the labor market already tight, I have my doubts as to how much the Labor Force Participation Rate could improve.

In the meantime, the major averages are within a hair of their all-time highs, but the internals are signaling caution. Risk appetite, as measured by high-yield bonds, is flashing a minor negative divergence.

As well, the equity advance has been extremely narrow. Leadership is concentrated in the megacap stocks, and large cap NASDAQ issues, while mid and small caps lag. 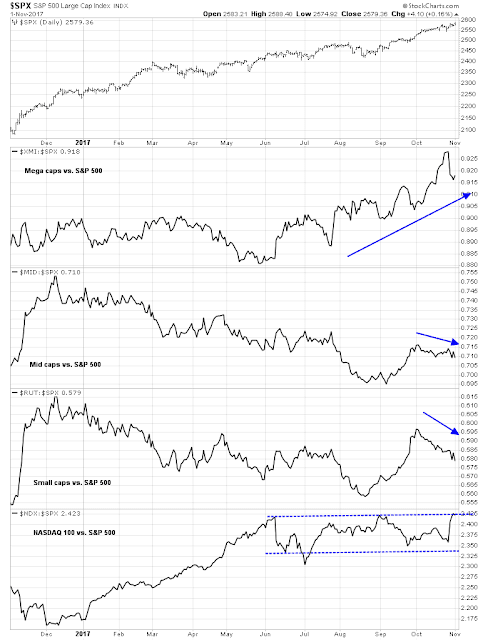 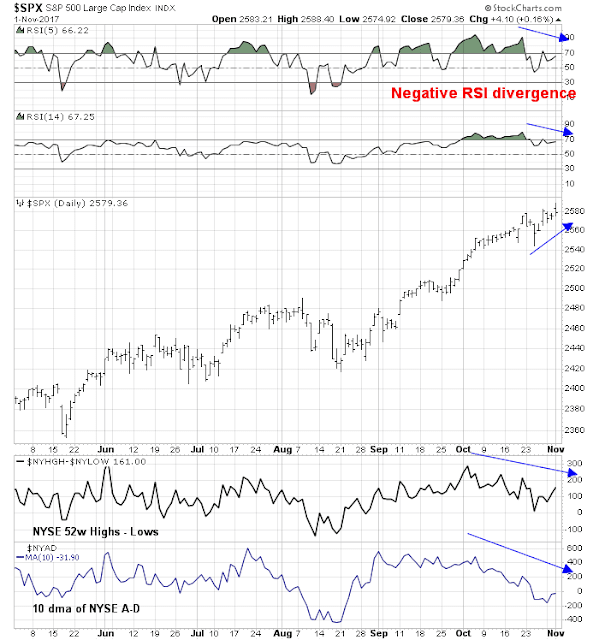 While I remain constructive on stocks for the remainder of the year, the market is vulnerable to a short term pullback. My inner investor is neutrally positioned at his investor policy weight of stocks and bonds, while my inner trader is short equities in anticipation of a 2-5% correction.