Will overheating spoil the market rally? – Humble Student of the Markets

The “Goldilocks” rally still has juice.

That perfect environment to sustain broad market gains — when global growth is fast enough to lift corporate profits, but tame enough to keep inflation muted — should be in effect for at least another 12 months, according to Kevin Gaynor, the head of international economics at Nomura Holdings Inc.

As the business cycle reaches its climax, European stocks, high-yield bonds and emerging-market credit have the potential to catch up with valuations notched in the halcyon days before the 2008 financial crisis, he said.

“We could get a more extended market rally,” Gaynor said in an interview. “When labor markets are tight and economic growth operates above trend, you see corporate profitability dropping, and that’s one reason to get bearish. For now, we aren’t seeing that type of margin pressure.”

I agree 100%. The nowcast shows that initial jobless claims, which has shown a remarkable inverse correlation with stock prices, is pointing to a robust economy. 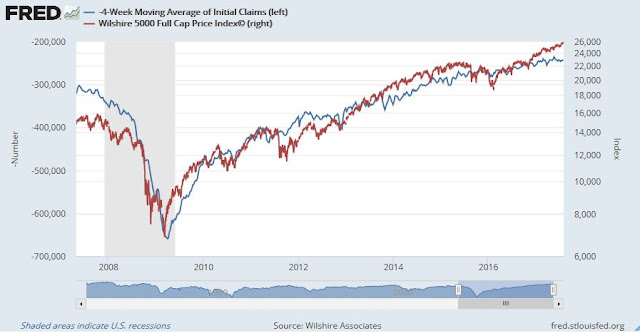 For investors and traders, the trick is to spot the turning point. Here are the bull and bear cases for stock prices.

Arguably, the stock market is in a sweet spot. Rates are low, and rising very slowly at a controlled pace. Growth is positive and non-inflationary. Core PCE, which is the Fed’s preferred inflation metric, remains tame. 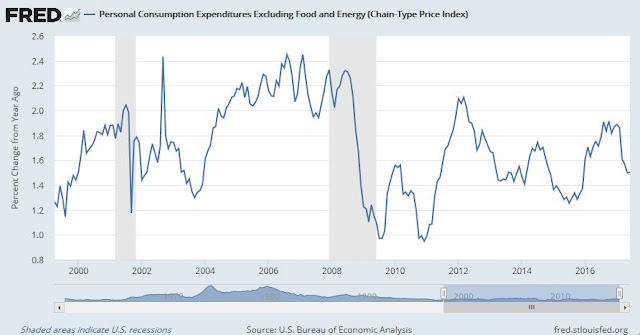 The deceleration in inflation rates is not just confined to the US, but it’s a global phenomena. 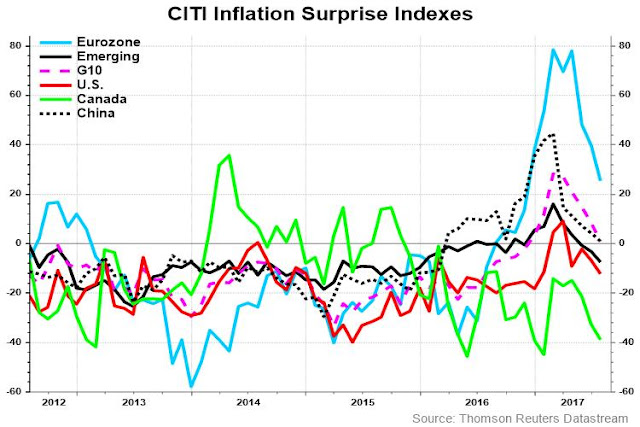 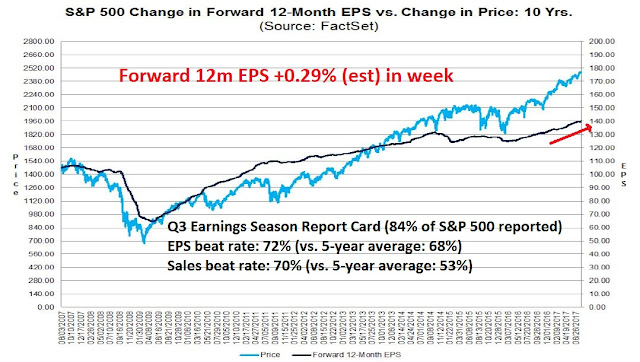 In short, the stock market is enjoying Goldilocks environment (not too hot, not too cold) growth, low rates, and low inflation, which is likely to restrain central bankers from being overly aggressive in raising rates. What more could an equity investor ask for?

Inflation pressure on the horizon

The bad news is the series of negative inflation surprises may be temporary. There are signs of nascent inflationary pressures from both the manufacturing and services sectors, which will force the Fed to raise rates in order to cool the overheating economy. 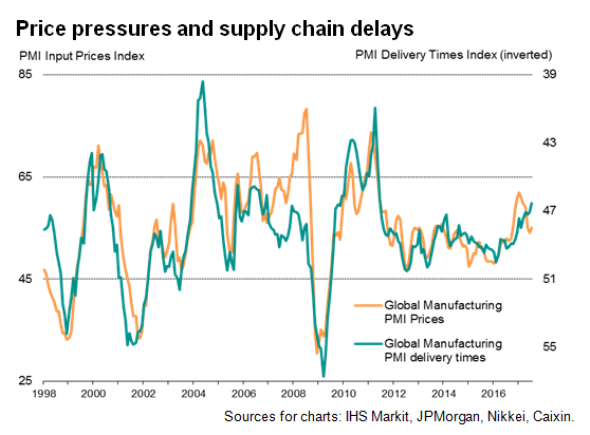 As well, the labor market is showing signs of tightness. The Conference Board spread between “jobs plentiful” and “jobs hard to get” is rising, which is a signal of rising labor supply capacity constraints. This measure has historically led the Atlanta Fed’s wage growth measure by several months. 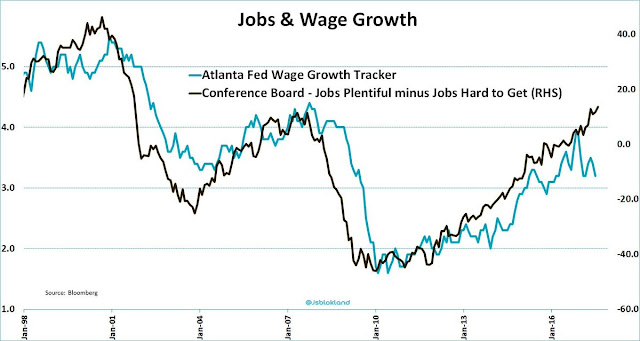 In addition the headline Non-Farm Payroll figure in the Employment Report, one closely watched number is Average Hourly Earnings (AHE) as a sign of wage inflation, which impacts Fed policy. While AHE remained stable at 2.5%, another way of measuring compensation is to calculate total pay using AHE X Hours Worked. As the chart below shows, Manufacturing Total Pay (blue line) is a more volatile data series compared to AHE (red line), but YoY change in Total Pay has begun to accelerate upwards. 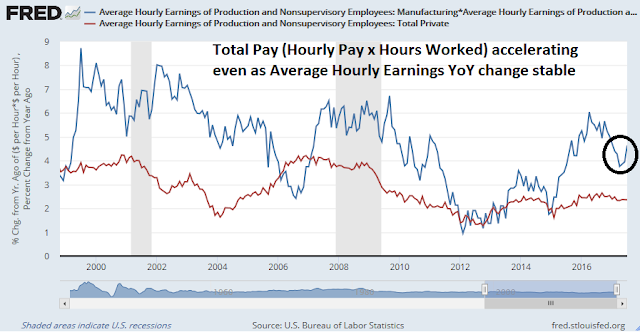 Even before any of these nascent inflation pressures appear, Tim Duy’s interpretation indicates that the Fed is set on its normalization path because the risks of falling behind the curve are too high:

The path laid out by the Federal Reserve at the beginning of the year for three interest-rate increases plus the start of reducing its $4.5 trillion balance sheet looks shaky due to the slowdown in inflation. There’s no question that the Fed is nervous about the persistent inflation shortfall. Chair Janet Yellen made note of the issue during her congressional testimony earlier this month.

That said, the Fed will balance the inflation data against the broader economic backdrop of ongoing job growth and easier financial conditions. If the latter two trends continue, policy makers will be hard-pressed to rein in existing rate hike plans even if inflation continues to fall short of their forecasts. The traditionalists at the Fed, including Yellen, retain their fundamental Phillips curve framework. They think it is only a matter of time before the Phillips curve is proved true and sends inflation higher, especially if monthly job growth remains well above the 100,000 level. They do not want to find themselves well below their estimate of the neutral interest rate should inflation accelerate.

Moreover, they have reason to retain faith in their fundamental forecast that inflation will return to target given that financial conditions have eased, not tightened, in response to the Fed’s four rate hikes in this cycle.

The CME‘s implied market expectations of a December rate hike stands at just under 50%, which sounds low to me. An upward adjustment of rate hike probability would likely spook stock and bond prices. 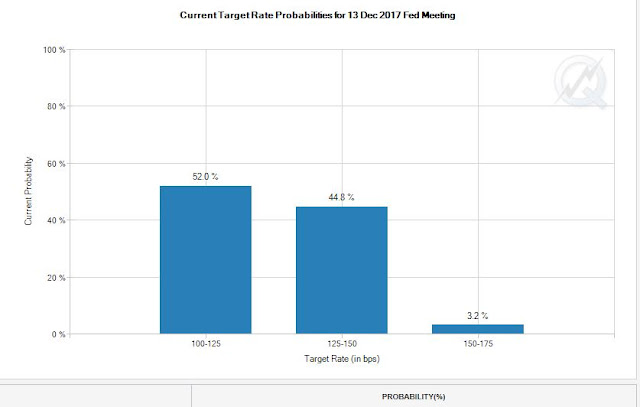 That said, the Fed’s normalization path is raising the risk of a policy mistake. Current market expectations call for the Fed to begin reducing the size of its balance sheet in September, followed by a possible December rate hike. CNBC highlighted analysis by Michael Darda of MKM Partners of the historical risks of balance sheet reduction. Five of the past six episodes have ended in recession:

Over the past several months, the Fed has prepared markets for the upcoming effort to reduce the $4.5 trillion it currently holds of mostly Treasurys and mortgage-backed securities. The balance sheet ballooned as the Fed sought to stimulate the economy out of its financial crisis morass.

Of those episodes, five ended in recession, according to research from Michael Darda, chief economist and market strategist at MKM Partners. The balance sheet trend mirrors what has happened much of the time when the Fed has tried to raise rates over a prolonged period of time, with 10 of the last 13 tightening cycles ending in recession.

Central bankers are in uncharted waters. In the past, real money supply growth has turned negative ahead of previous recessions, However, past episodes of negative money growth have also coincided with rising M1 velocity (Velocity= GDP/M1). The current expansion cycle has been characterized by relentless falling M1 velocity, which is an indication of a liquidity trap. The Fed can push money into the economy by raising M1 and M2, but the liquidity injections are not showing the same effects as they have in past cycles. 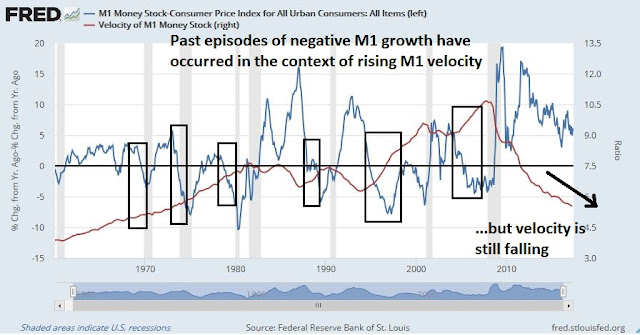 Central bankers are about to embark on a grand monetary experiment. What happens when they normalize monetary policy even as velocity falls?

Even as the Fed continues on its normalization path, there are signs that the economy is weakening. New Deal democrat recently fretted about softness in consumer durable, namely autos and housing. Auto sales seems to have peaked for this cycle, though arguably some of the decline could be attributable to the “sharing economy” and the rise of services like Uber. 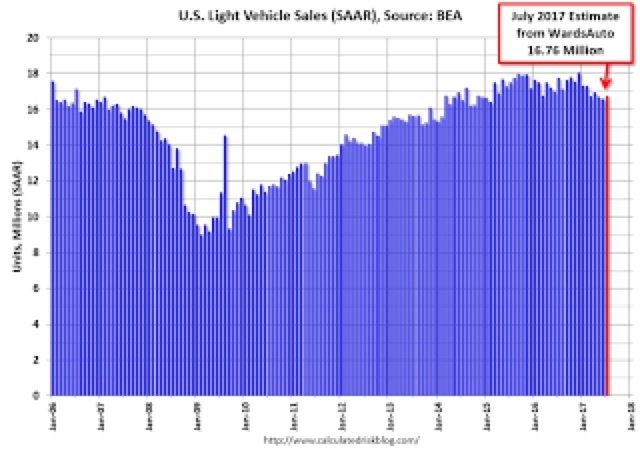 Housing, which represents a significant consumer durable good and a highly cyclical part of the economy, appeared to have peaked as well.

At the same time, FT Alphaville raised some questions about the resilience of consumer spending. To be sure, real retail sales remain on a growth path today and it has not peaked yet, which can be an early warning of recessionary downturns. 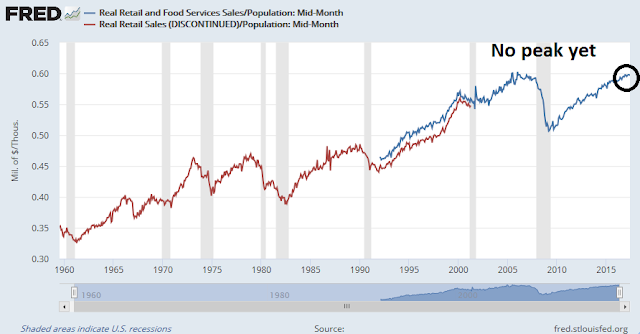 The internals, however, are not as positive. Incomes are not keeping up with consumption, which indicates that consumers are borrowing to maintain their spending. 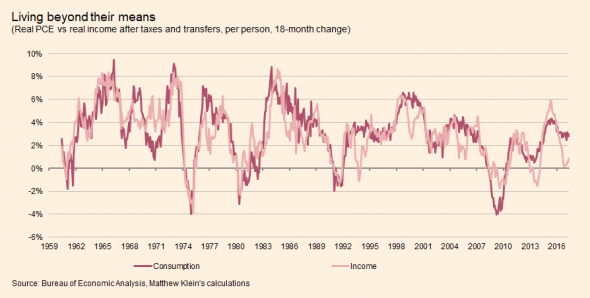 This interpretation is confirmed by the falling savings rate. 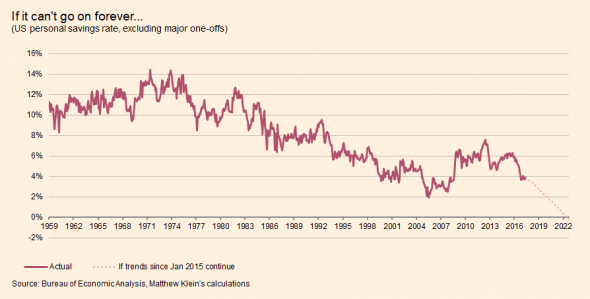 Is it any wonder why the risks of a policy mistake are rising?

The big question for investors is, “Where is the inflection point? When should investors start to get cautious about stocks?” An analysis from EconoPic Data is highly instructive. Shiller CAPE is current trading at above 30, which is historically high, and therefore the market faces valuation headwinds as it tries to advance.

Further analysis shows that, as long as CAPE is rising, which indicates multiple expansion, returns have held up well. But investors should get out of the way when CAPE reverses course, which is reflective of multiple contraction, or negative price momentum. 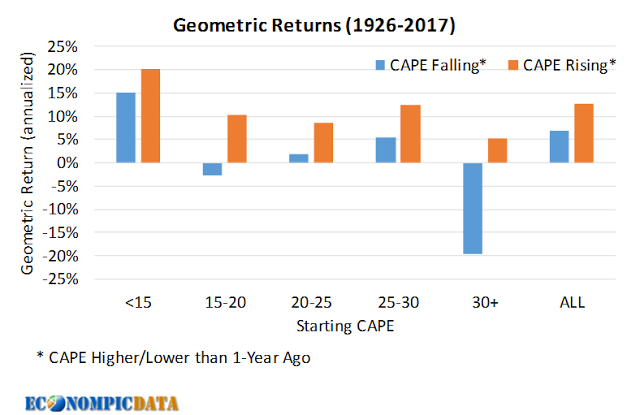 For now, the nowcast of the economy and stock market remains strong. The latest Employment Report shows that temporary jobs, which has led Non-Farm Payroll in the last two cycles, shows no signs of peaking. 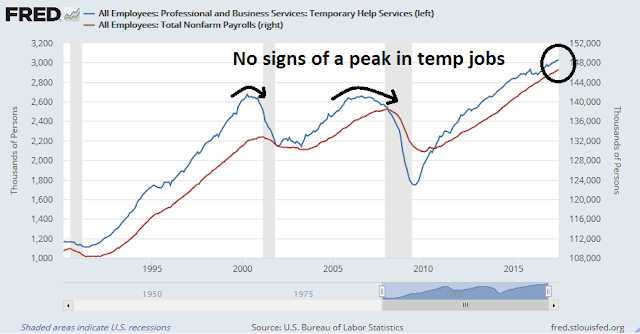 The Citigroup Economic Surprise Index is recovering from a very low extreme, indicating that macro data is starting to improve. 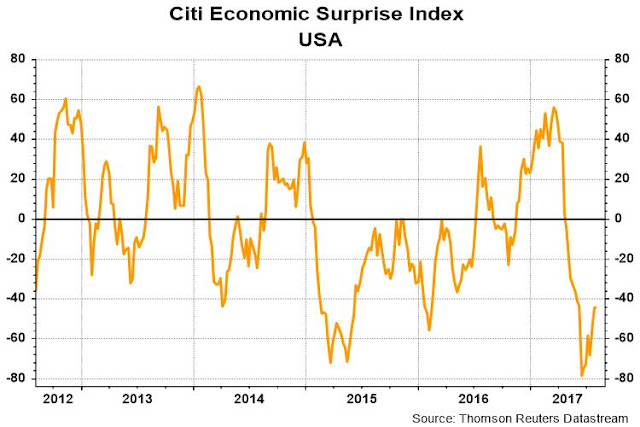 As long as these indicators, along with initial jobless claims, real retail sales, and forward EPS revisions are positive, the risk of a major stock market downturn is low. While the market may appear to be tactically over-extended, any corrective action should be seen as a buying opportunity.

Looking to the week ahead, the SPX remains in a narrow range but I stand by my mid-week remarks (see Bullish exhaustion). The latest analysis from FactSet confirms the analysis by BAML in my Bullish exhaustion post. The market is not rewarding earnings beats but punishing misses:

The inability of stock prices to rally on good news is a signal that the path of least resistance for stock prices is down. We just need a negative catalyst to trigger a correction.

Lack of confirmation or synergy between the two oldest U.S. market benchmarks triggered a Dow Theory Sell Signal July 26. When the backbone of our economy that transports goods across the nation does not perform well it is an indication that there is underlying economic woe. It is not always right and like everything else it is subject to interpretation, but it does have a solid track record and is worth heeding here as our other indicators are pointing to a summer selloff around the corner…

These Dow Theory Sell signals take some time to pan out, but the recent history suggests that usual selloff and low following a Dow Theory sell signal may be on its way shortly. After experiencing a typically strong post-election July VIX is still low but turning higher. Sentiment is high and stocks are higher, so the time seems nigh for the August-September slide. 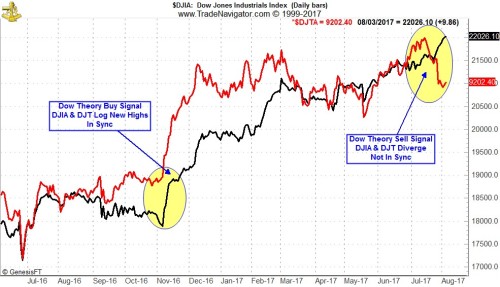 Negative breadth divergences are also flashing warning signals. Both the % bullish and % above the 200 dma are falling, while the market has been flat. The last two times this happened, the market resolved itself in corrections. 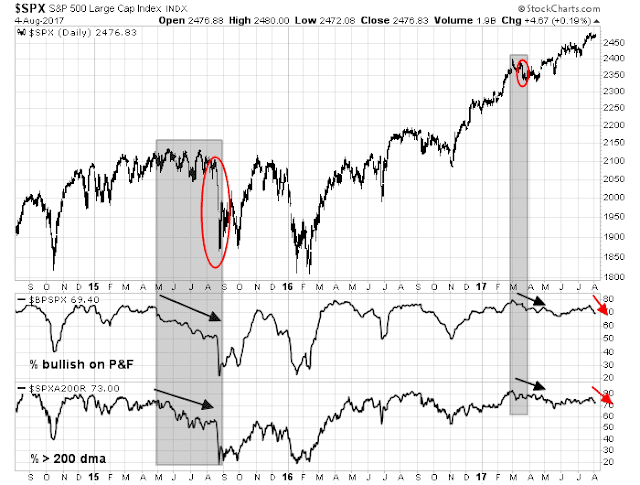 My inner investor remains constructive on stock prices. Recession odds remain low, and therefore so is downside risk from a major bear market. My inner trader is positioned for a corrective episode of unknown magnitude. He is just waiting for the bearish catalyst to surface.

9 thoughts on “Will overheating spoil the market rally?”