Just overbought, or a “good overbought” signal? – Humble Student of the Markets

Mid-week market update: In the past two weeks, I have become progressively more bullish on stocks (see A capitulation bottom? and Buy signals everywhere), based on the belief that the risk/reward trade-off was tilted in favor of the bulls. Even as the market bottomed with sentiment at crowded short levels, the rebound had been unusually weak with little bullish follow-through. That pattern was broken this week when the stock market finally put together two consecutive up days.

In order for this rebound to turn into an uptrend, the market has to show some positive momentum, with a series of “good overbought” conditions. Such episode tend to be characterized by RSI-5 (top panel) getting overbought and staying overbought, as well as the SPX riding the top of the Bollinger Band (BB). The chart below shows some past examples of bullish impulses in the last two years. 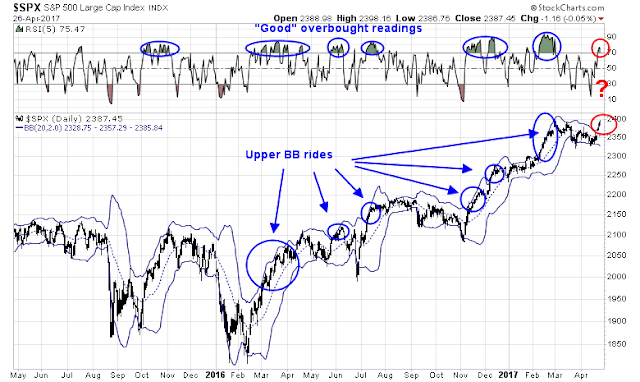 Can the market continue upwards, or will it stall as it tests resistance at its all-time highs? Will the market focus on the bullish message of the Trump tax proposals, or news reports indicating that the Trump administration is giving notice that it is getting ready to withdraw from NAFTA? Here is what I am watching.

There is some reason for bullish optimism as there are signs of a possible broadly based upside breadth and momentum thrust. Some encouraging signs come from the other major US indices as both the NASDAQ Composite and the Russell 2000 made new all-time highs this week. In addition, Chris Ciovacco pointed out that the market is experiencing a bullish breadth divergence, based on net NYSE new highs vs. lows. 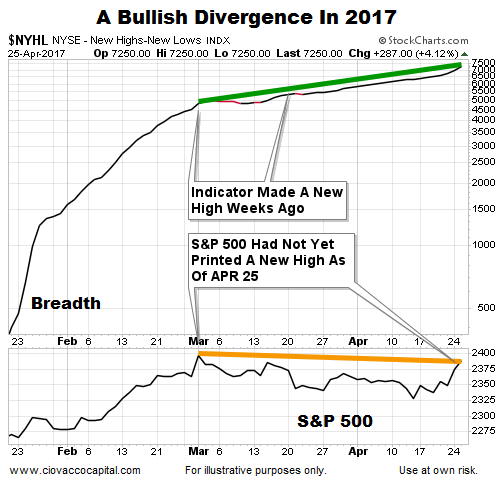 Another constructive sign came in the form of a possible breadth thrust. I had written about the Zweig Breadth Thrust before (see A possible, but rare bull market indicator). Steven Achelis at Metastock explained the indicator this way:

Currently, we don’t have the setup for a classic Zweig Breadth Thrust (ZBT). However, the ZBT calculation is based on NYSE breadth. As good traders are well aware, NYSE breadth statistics are distorted by the presence of a number of closed-end funds and REITs, which do not necessarily reflect market action of common stocks.

To remedy this problem, I developed a ZBT indicator based strictly on SP 500 breadth as an apples to apples comparison of market breadth. As the chart below shows, the SPX ZBT Indicator is nearing a buy signal, but not yet. It has until the market close on Friday to exceed the top line and signal a momentum thrust. 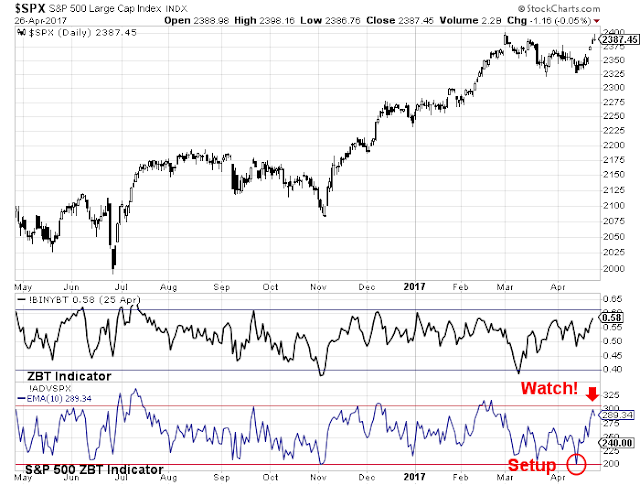 If a breadth thrust were to continue, then one of the secondary signs that I would be watching for as confirmation is the continued outperformance of the price momentum factor. The chart below depicts the relative return of momentum stocks against the market. A definitive rollover in this factor would be a warning sign that to turn more cautious. 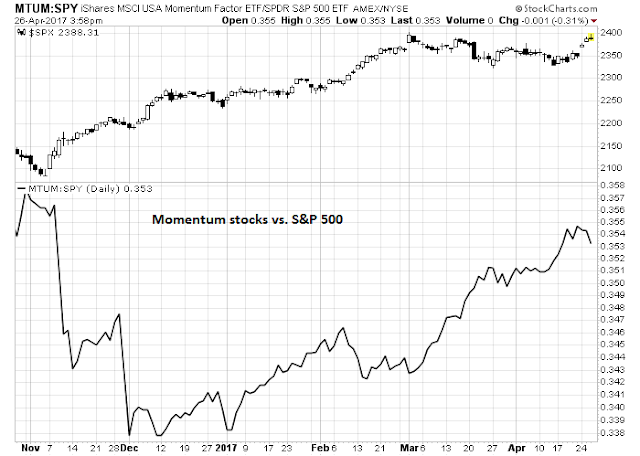 For now, my inner trader is enjoying this bull run, but he is keeping an open mind as to whether it can continue.

8 thoughts on “Just overbought, or a “good overbought” signal?”