Will the real Q1 GDP please stand up? – Humble Student of the Markets

The US Q1 GDP report is scheduled to be released Friday morning. Current expectations call for a Q/Q growth rate of 1.1%, but there are wide disparities in nowcasts. The Atlanta Fed GDPNow nowcast of Q1 GDP growth has been declining since late February and stands at a meager 0.5%.

By contrast, the New York Fed’s nowcast has been relatively steady, with an estimate of 2.7%. 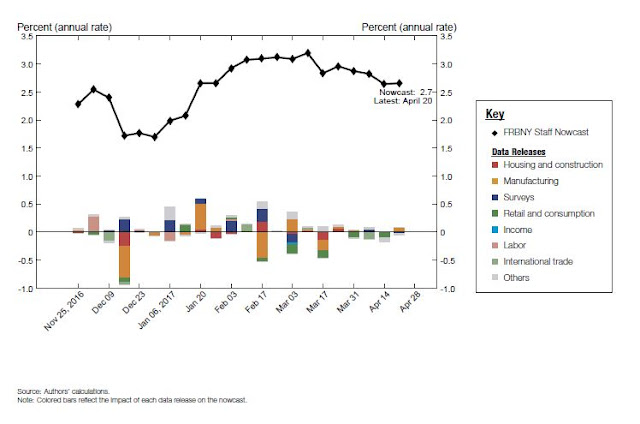 What’s going on? Who is right? The evolution of GDP growth in 2017 will have a large impact on Fed policy.

High frequency economic releases have been disappointing. The Citigroup US Economic Surprise Index (ESI) has been plunging, as a reflection of the recent weakness. However, ESI has shown a seasonal pattern of declining into mid-May and then rising into September.

Fed watcher Tim Duy believes that the Fed is likely to look through any Q1 weakness and maintain their stated policy of three rate hikes in 2017 because of a history of weak Q1 seasonality:

Federal Reserve officials continue to anticipate additional monetary policy tightening this year on the order of another two interest-rate increases. They have no reason to back down just yet. The weakness seen in “hard” economic data based on actual performance relative to “soft” data, such as surveys, is enough to temper concerns that they are falling behind the curve and keeps a May move off the table. That means they can be patient and adjust their forecasts, if necessary, before the June 14 meeting…

It should not come as a surprise that the Fed would be looking through these weak numbers. They recognize that residual seasonality issues — the tendency for first-quarter growth to be unusually low — may be holding down estimates. Policy makers also know that net exports and inventories account for much of the weakness. The Fed will thus seek guidance from real private final sales, which the Atlanta Fed currently estimates growing at a 2.6 percent pace. Hence, the underlying economy looks to be growing at a rate that might exceed their forecasts. Also, the soft data represent upside risks to their forecasts.

Jim O’Sullivan of High Frequency Economics, who was named Marketwatch’s top economic forecaster for six years in a row and won the award for nine years out of the last 13, concurs with Duy’s assessment. O’Sullivan stated in a Bloomberg interview that he also sees another two Fed rate hikes in 2017, which represent a more hawkish shift in Fed policy.

One of the key signs of Fed policy will be the Q1 GDP report. Who will be right, the Atlanta or New York Fed? Even if Duy and O’Sullivan are correct about the Fed looking through Q1 weakness, a strong GDP report that is closer to the New York Fed estimate will be a confirmation that the economy is strengthening sufficiently for the Fed to stay on its projected tightening path.

4 thoughts on “Will the real Q1 GDP please stand up?”