When I first got interested in the stock market (back in the day when we programmed computers with punched cards), I learned the principles of market cycle analysis from a grizzled veteran of technical analysis. Markets are said to move in cycles.

Here is how an idealized cycle works. In the initial phase of an expansion, central banks lower rates to boost the economy, and the market leaders are the interest sensitive stocks. As the cycle matures, leadership rotates into consumer stocks, followed by capacity expansion, which leads to capital goods sector leadership. The late phase of the cycle is characterized by tight capacity and rising inflation, which is an environment where asset plays and commodity extraction industries outperform.

I never forgot that lesson. I also learned that while the market cycles thematically parallel economic cycles, they are different. Market undergo mini-cycles of changes in sentiment whose length are much shorter than economic cycles. Nevertheless, the broad principles of market cycle analysis remain valid today.

In the past few weeks, I have been repeating the message that the intermediate term equity market outlook appears bullish (see Buy the dip! and Buy! The party is still going strongly). There is a growth surge, not only in the US, but around the world. This chart from Callum Thomas of Topdown Charts summarizes the growth outlook perfectly. 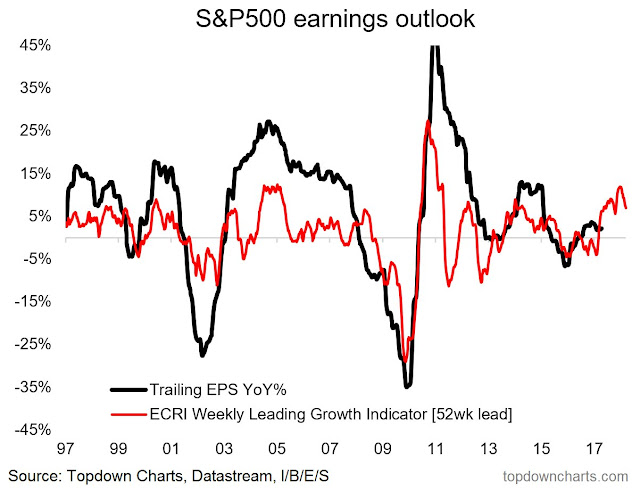 In addition, the recent 2-3% pullback saw sentiment tank to bearish extremes, which is contrarian bullish. Last week, oversold markets began to bounce, which is an indication of an inflection point (see Buy signals everywhere). As well, Tom McClellan observed that the 10-day Open ARMS index was also signaling a bottom. 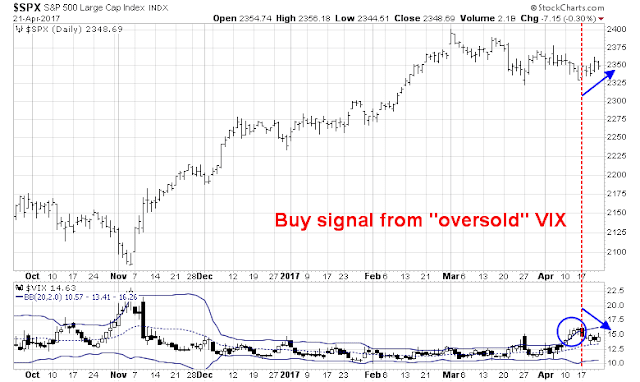 Rather than repeat the same bullish message for another week, I thought that a sector review from a market cycle analytical framework would be a good change of pace. Interestingly, the broad message from this analysis tells the story of a global upturn, and we are roughly only in the third inning of an intermediate term bull phase.

Synchronized US and Europe

One of the tools of any sector review is the Relative Rotation Graph (RRG, click link for full explanation), Market leaders tend to rotate in a clockwise direction in an RRG chart, from lagging (bottom left), to improving (top left), to leading (top right), to weakening (bottom right), and then finally reverting to lagging again.

Here is the RRG chart of US sectors. It shows the revival of “animal spirits”, in the form of enthusiasm for high beta, high octane stocks, and the rising leadership of interest sensitive stocks. The laggards are mainly the late cycle plays, namely as energy and materials. Gold stocks, which are also inflation hedge stocks, appear to be rolling over while in the emerging quadrant before it can take over the leadership mantle. 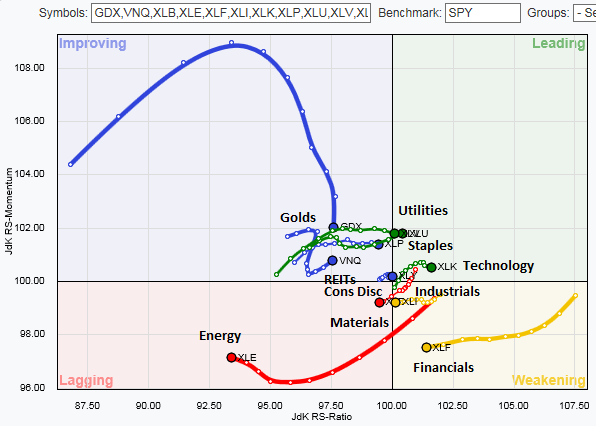 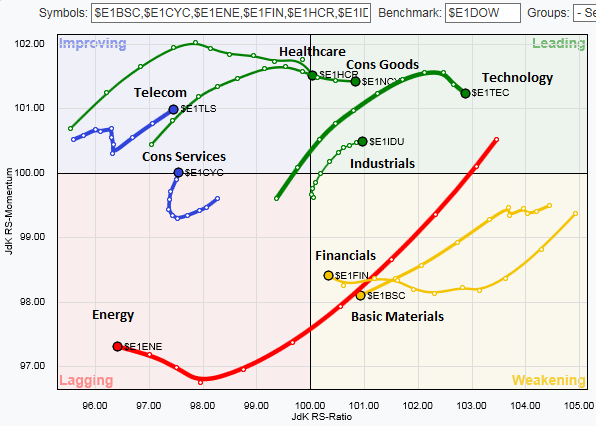 The combination of these two RRG charts indicate that the dynamics of the market cycle are global in nature. The combination of the current picture of sector leadership, and the idealized template of sector rotation that I described above, suggests that we are only in the third inning of an intermediate term cycle which can carry the SPX to the 2500-2600 region before it’s all over.

A detailed look at sectors and industries 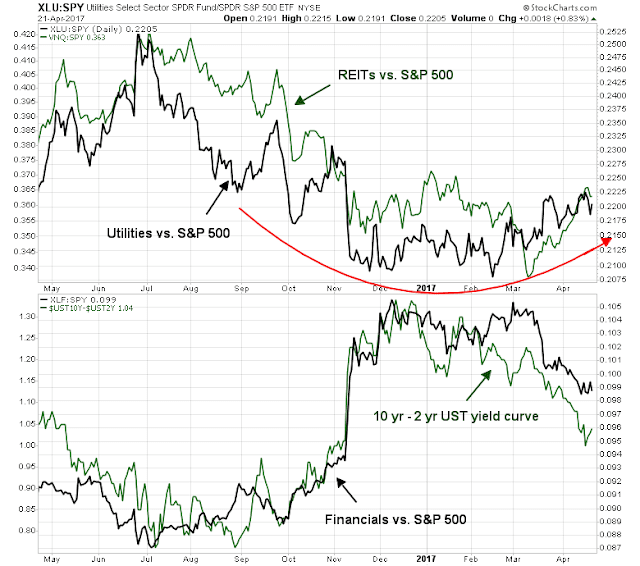 Here is a chart of some mid-cycle sectors. Consumer Discretionary stocks are bottoming. Late cycle industrial stocks are struggling, and it’s too early to be overweight this sector. Health Care is starting to trace out a relative bottom. Biotech, which is the high beta “canaries in the coalmine” of this sector, remains range-bound compared to the market. 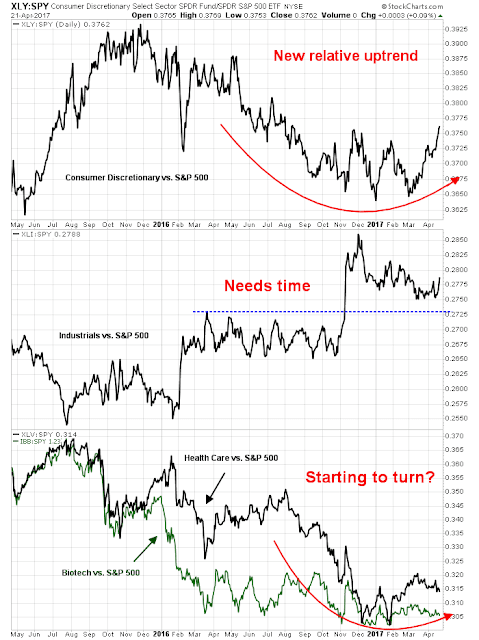 The emergence of Consumer Discretionary stocks as a leadership sector was a bit of a surprise. Here are the relative performance charts of selected industries within the sector. Most of the industries within the sector, with the exception of Media, are starting to turn around. Even the much maligned Retailers look washed out and they are starting to bottom. 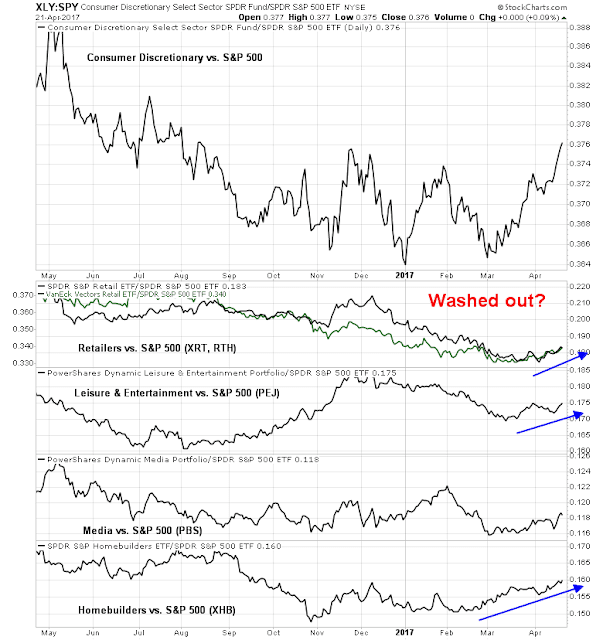 Technology was another surprising leadership sector, especially in light of the pattern exhibited by the other sectors in a market cycle analytical framework. As the chart below shows, enthusiasm for high beta FANG and FANG-like stocks are rising again, except for biotech stocks. 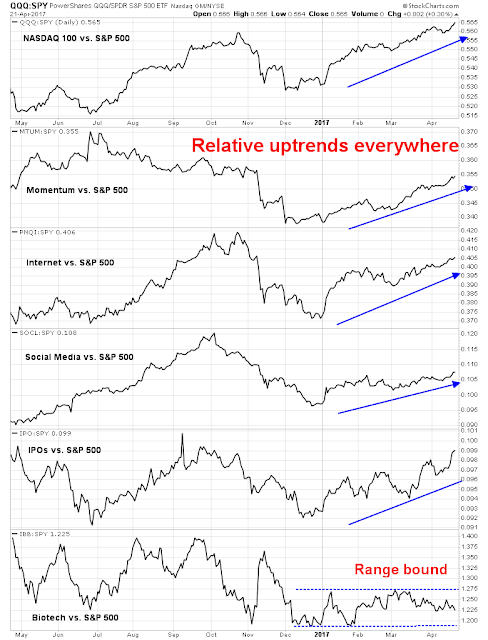 Finally, here is the relative return chart of late cycle inflation hedge sectors. Energy and mining stocks (top panel) have broken out of relative downtrends. They need some time to consolidate and bottom before they can become market leaders. The same goes for gold stocks (bottom panel). 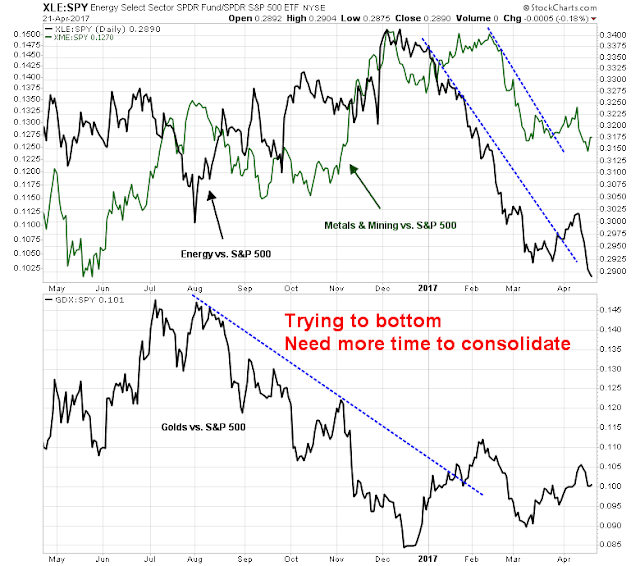 In addition, there are signs that gold is reaching a bullish sentiment extreme, which is contrarian bearish. A recent Bloomberg survey found a similar reading of excessive bullishness. 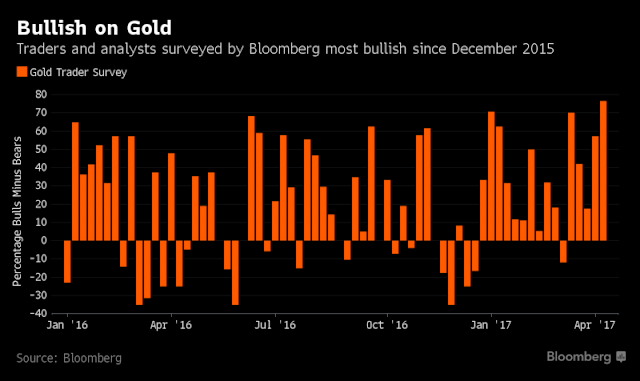 Mark Hulbert also found that gold market timers were in a crowded long:

Consider the average recommended gold market exposure level among a subset of short-term gold market timers that I monitor (as measured by the Hulbert Gold Newsletter Sentiment Index, or HGNSI). This average earlier this week rose to as high as 57.7%, the highest level in nearly 12 months.

As recently as mid-March, in contrast, the HGNSI stood at minus 27.7%. So in six weeks’ time the average gold timer increased his recommended exposure level by more than 85 percentage points. No wonder gold’s rally ran out of steam earlier this week.

In summary, bullish enthusiasm has returned to the market, in the form of FANG leadership. In addition, the emergence of leadership of interest sensitive and consumer discretionary stocks suggests that the market is still in the early phase of an intermediate term bull move.

The week ahead: Still anxious 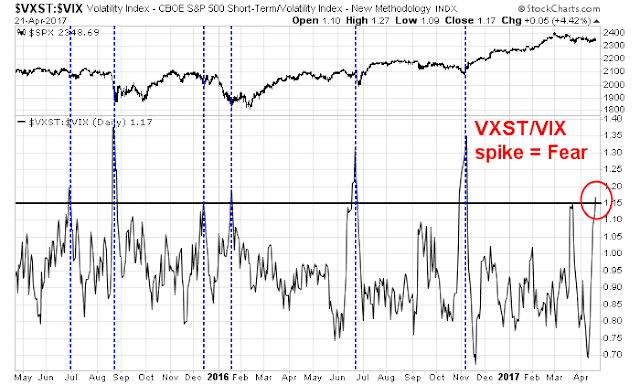 Past buy signals where an indicator has become oversold and mean reverted to neutral has resulted in powerful bullish thrust. The current episode is unusual as the bullish follow through has not materialized. The VXST/VIX spike is probably indicative of rising fear over the French election, whose first round is occurring this weekend.

For a different perspective, the chart below shows the spike in VSTOXX (via Callum Thomas). In all likelihood, any outcome other than where Le Pen/Mélenchon, or Fillon/Mélenchon victories will spark a relief risk-on rally. 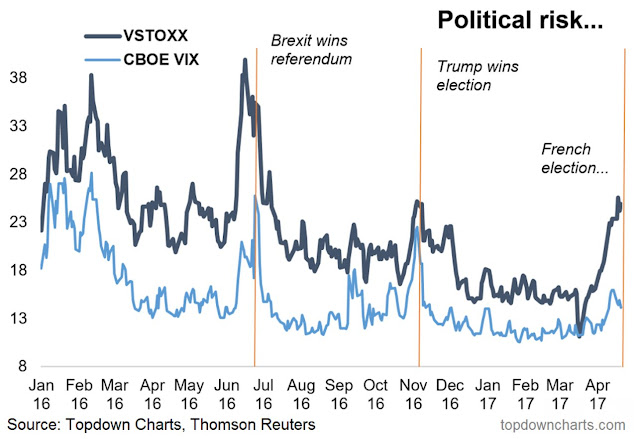 In the meantime, eurozone PMI has risen to a six year high and Bloomberg reported that French companies are adding staff and shrugging off election uncertainty. The view from the ground in France doesn’t sound too bearish to me. 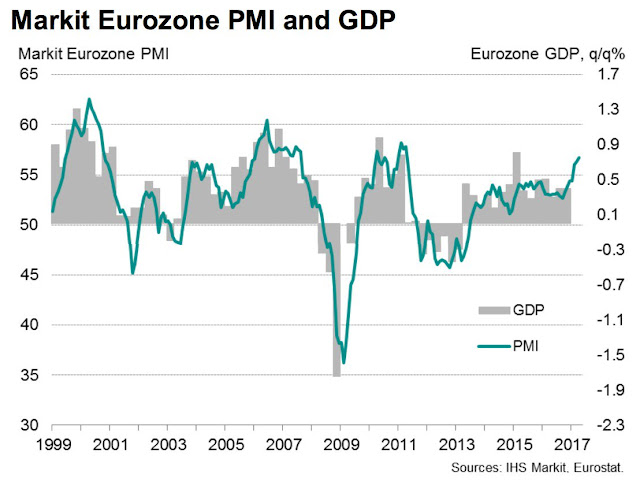 In addition, President Trump has announced that he will be unveiling his tax reform and reduction proposals next Wednesday. Even though the announcement is expected to be heavy on broad principles and light on details, the announcement has the potential to be the bullish catalyst that the stock market has been waiting for.

My inner investor remains bullishly positioned and overweight equities. My inner trader is nervously long. At a minimum, he would not want to be short in light of all of these potential