Top-down meets bottom-up: How expensive are stocks? – Humble Student of the Markets

Recently, I have seen several variations of market analysis concluding that stocks are expensive based on forward P/E ratios. Here is a tweet from Jeroen Blokland. David Rosenberg characterized the current equity environment as picking up pennies in front of a steamroller. 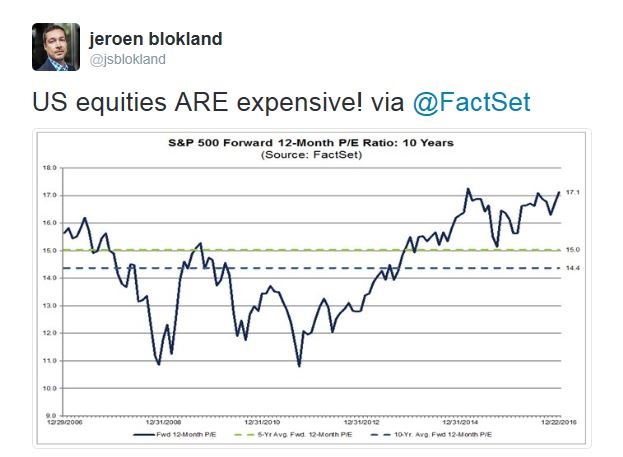 Blokland followed up the above tweet with an additional comment indicating that earnings growth is badly needed. 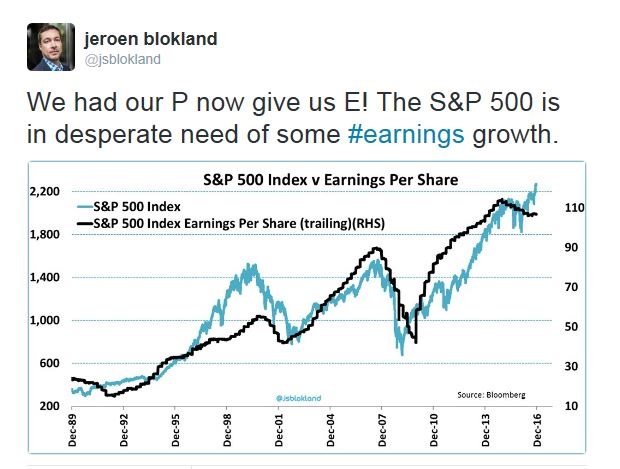 Does this mean it’s time to get cautious and sell your all stocks? Not so fast! A case can be made that the analysis of the forward P/E chart is based on a misread of how forward EPS expectations are formed. On an adjusted basis, stocks do not appear to be expensive at all.

Let’s consider how the process of how EPS estimates are formed. Individual analysts project earnings for the companies that they cover. Various data services compile and aggregate earnings estimates. From these estimates, forward EPS can be calculated for individual companies and for the market as a whole.

What happens when there is a macro shock to the system, such as the Asian Crisis, or the election of a new leader who promises business friendly policies? How do analysts react when the magnitude of the effect is unknown?

During my experience managing equity portfolios using bottom-up quantitative models, a sequence of events occur in approximately the following way after a macro shock. First, the best factors that work are the short-term technical analysis models, followed by estimate revision factors, as analysts revise their earnings upwards or downwards. Finally, the classic fundamentally driven value and growth factors then respond. After a macro shock, analysts know that things will be very good, or very bad, but they don’t know how much. They don’t actually revise their estimates until they can quantify the effect.

In the current environment, the market believes that the Trump tax proposals will be positive for earnings growth. We just don’t know how much. In effect, company analysts haven’t revised their earnings estimates to reflect the likely effects of the Trump tax cuts yet.

On the other hand, while bottom-up derived data of individual company analysts’ estimates don’t reflect the effects of the Trump tax cuts, Street strategists have taken a stab at projecting the likely tax cut effects on SP 500 earnings. As I pointed out before (see How Trumponomics can push the SP 500 to 2500+), the consensus forecast is about a 10% boost to earnings in FY2017.

The chart below from Factset (annotations in red are mine) depicts what happens if the E in the forward P/E ratio rose by 10%, as per the top-down strategists. The forward P/E falls from 16.9, which is near its historical highs, to 15.4, which is slightly above its 5-year average. Do stocks look expensive when viewed this way? 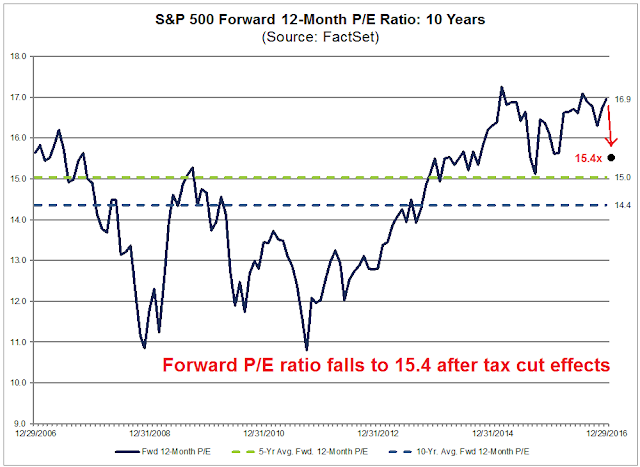 What about trailing P/E and earnings growth?

On a trailing P/E basis, the stock market does appear to be expensive at first glance. However, as the chart below shows, a trailing P/E ratio of 20.6 translates to an earnings yield of 4.9%. When you consider that the 10-year Treasury note yields 2.5%, do stocks look expensive? 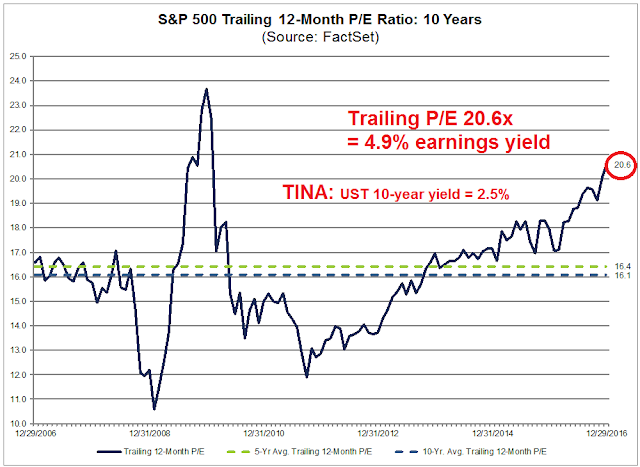 The bull case for US equities have three earnings components:

Company analysts have not factored the last two effects into their earnings estimates. However, we can see from Factset that forward EPS continues to rise due to a cyclical recovery in economic growth. 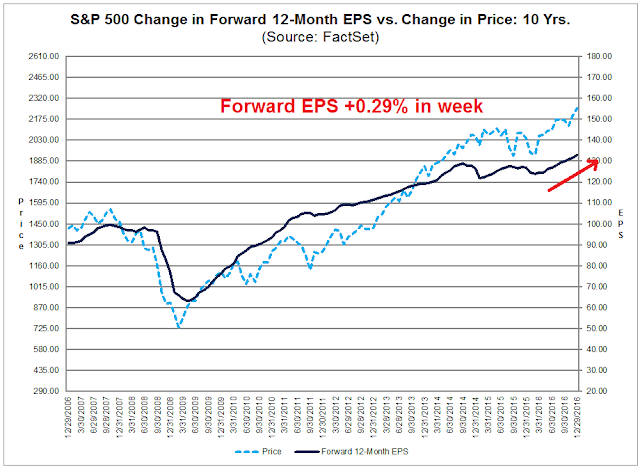 Indeed, the latest Atlanta Fed’s nowcast of Q4 GDP has risen to 2.9%:

The growth revival component of the bull case is well supported by the evidence, both from a top-down (Atlanta Fed`s GDPNow) and bottom-up (Factset`s aggregated forward EPS) basis.

In conclusion, we can make a bull case that the US equity market is fairly valued. The forward P/E ratio, adjusted for the Trump tax cuts, is not out of line with historical experience. The trailing earnings yield appears reasonable when compared to fixed income alternatives. The economy is undergoing a cyclical rebound, which would have happened no matter who had won the election.

Just because a market is fairly valued doesn’t meant that it can`t get overvalued. The bull case is also bolstered by a positive momentum in risk appetite. Josh Brown highlighted analysis from Ari Wald of Oppenheimer indicating that high beta stocks have rallied through a relative downtrend. While nothing goes up in a straight line, this development can be interpreted bullishly on an intermediate term basis. 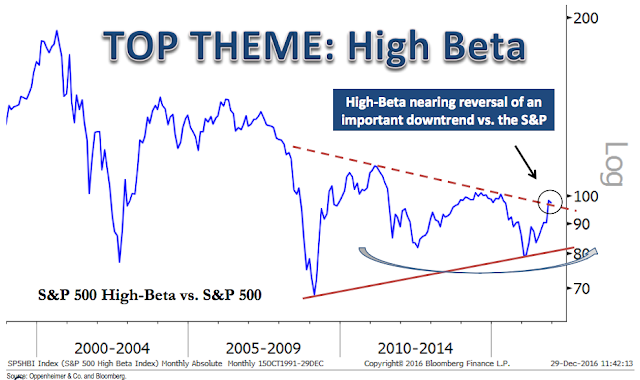 The bear case is the market is pricing in the full effects the Trump tax cuts. If the incoming administration stumbles and cannot get its fiscal package through Congress, equity prices will adjust downwards in accordance with that disappointment. In addition, there are plenty of policy potholes in the road as the new team takes over the White House (see The bear case: How Trumponomics keeps me awake at night).

For the last word, we can get a clue from how corporate insiders are reacting. The latest update from Barron’s of insider activity shows that the behavior of this group of “smart investors” has been in neutral since the election.

So far, the insiders don’t appear terribly concerned about valuation, but they are sitting on the fence.

1 thought on “Top-down meets bottom-up: How expensive are stocks?”