Watch the reaction, not just the Fed – Humble Student of the Markets

All eyes on the Fed

As market activity starts to wind down for the holiday season, the major event next week will be the FOMC meeting. The Fed’s policy move has been well telegraphed and a quarter-point rate hike will be a foregone conclusion. Bond yields have been rising, and so have inflationary expectations, but that’s not a surprise. Sometimes the best part of watching a play where you already know the plot is to watch the audience`s reaction. 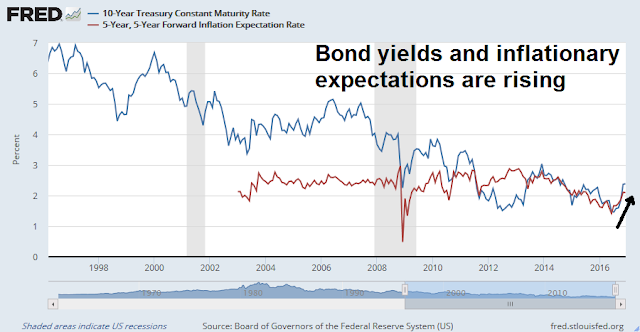 Even as bond prices got clobbered, equities have soared. Major US indices achieved new record highs last week. At this rate, the SPX may achieve its point and figure target of over 2500 in the not too distant future. 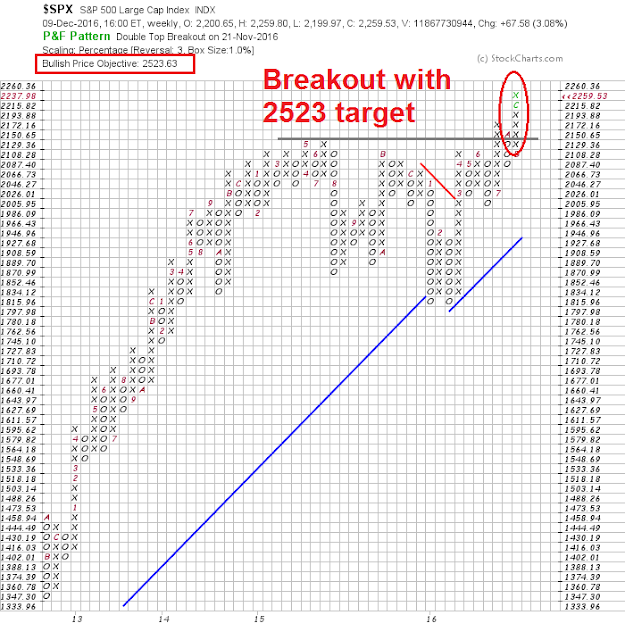 To stay ahead of the markets, here is what I will be watching next week in the wake of the FOMC announcement:

Watch the audience, not just the show.

There are plenty of reasons why the Fed should start a rate hike cycle. The unemployment rate is falling, and the normalized initial claims to population metric is at an all-time low. The combination of these factors is pointing to cost-push inflationary pressure because of rising wages. 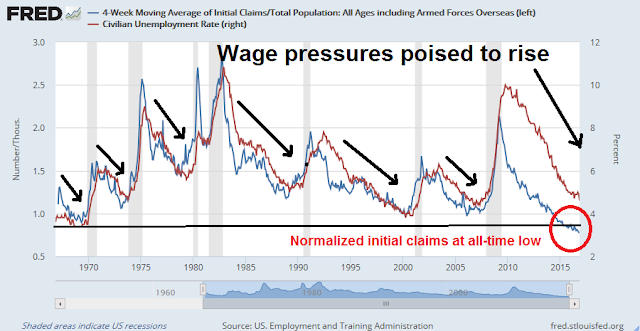 Economic conditions today are typical of a late cycle expansion. The combination of rising wages and rising core PCE generally lead to tighter monetary policy. It’s time for the Fed to tap on the brakes. 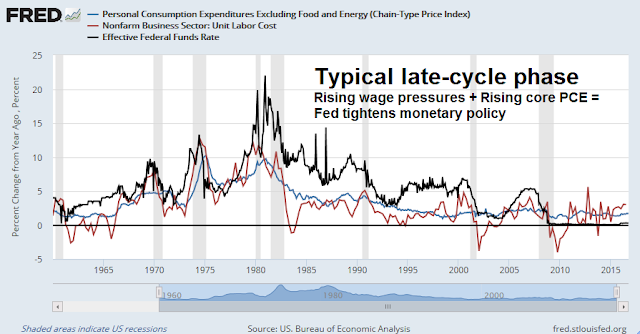 Economic growth is robust again after the mid-cycle slowdown early this year. The good news is that the economic expansion is global in scope. PMIs (Purchasing Managers’ Index) are rising and tell a story of global reflation. 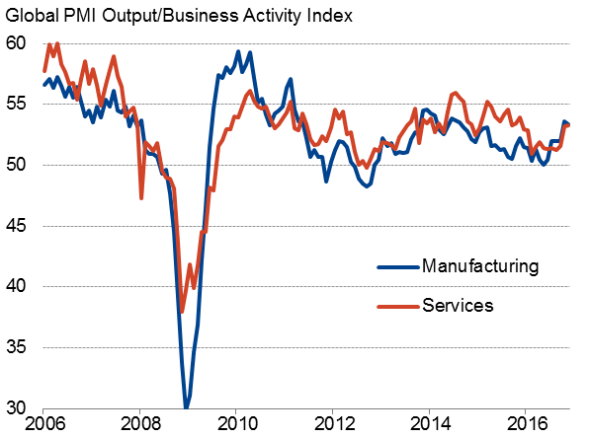 Bloomberg reported that Citigroup’s Economic Surprise Index, which measures whether macro-economic releases are beating or missing expectations, are positive in all of the big regions. 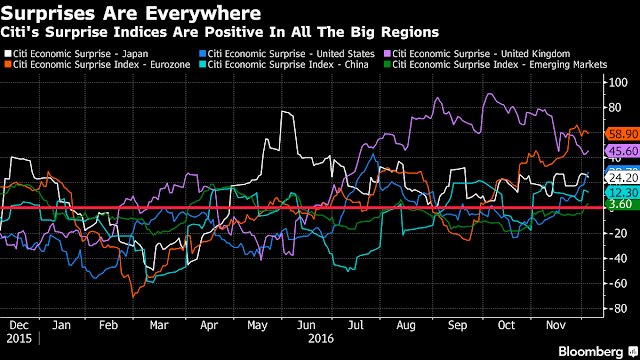 Is the upturn sustainable? Gavyn Davies is hopeful. The improvement in growth is widespread and it’s coming from both EM (emerging markets) and AE (advanced economies):

[T]he main reason for the recent uptick in global growth has stemmed from the EMs, notably from the major easing in fiscal policy in China, and the flattening in deep recessions in Russia and Brazil. The main downside risks to growth prospects in the EMs are a return to tighter credit control in China and an outflow of capital as an aggressive tightening in Fed policy pushes the dollar higher. These risks need to be watched, but do not seem imminent.

In the AEs, fiscal policy is being eased, monetary policy is still accommodative and the manufacturing sector is gaining from firmer corporate investment as the energy shock dissipates. These developments may lead to an upgrade to growth forecasts in the AEs for the first time in many years, provided that a major shock to confidence can be avoided from a shift towards populism in elections in the Eurozone next year.

Overall, we can perhaps be hopeful, though certainly not yet confident, that the global economy will begin to overcome the powerful forces of secular stagnation next year.

Is it any surprise that the Fed is getting ready to raise rates?

Under “normal” circumstances, the initial phase of a rate hike cycle tends to be equity bullish. That’s because the positive effects of better growth expectations overcome the negative effects of higher rates. As this chart from the JPM Asset Management shows (annotations are mine), stock prices tend to be correlated with changes in bond yields when yields are low. 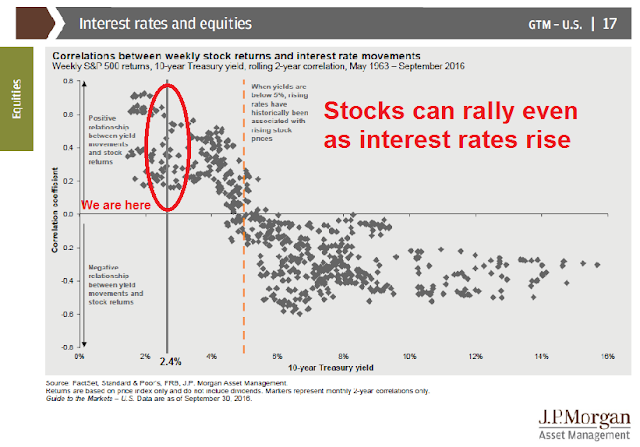 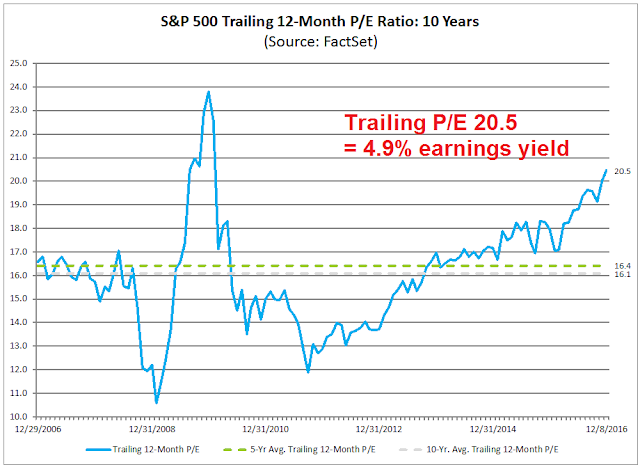 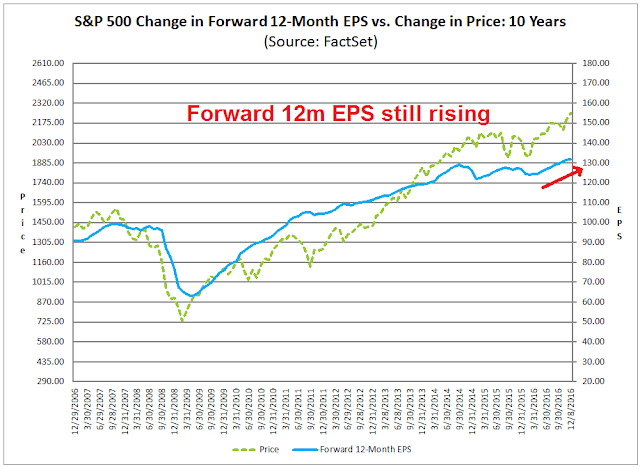 What could derail this rally?

Under “normal” circumstances, the market “should” focus on the rising growth outlook and bid up stock prices. But do the words “normal” and “should” apply to today’s market environment?

There are a few factors that could derail a potential stock market rally into 2017. First, the Fed could spook the market with a more aggressive path of rate normalization. New York Fed President William Dudley created some uncertainty in a speech last week. First, he stated that he supports starting a rate hike cycle:

If the economy grows at a pace slightly above its sustainable long-term rate, as I expect, the labor market should gradually tighten further, and the resulting pressure on resources should help push inflation toward our 2 percent objective over the next year or two. Assuming the economy stays on this trajectory, I would favor making monetary policy somewhat less accommodative over time by gradually pushing up the level of short-term interest rates.

But the election of Donald Trump creates “considerable uncertainty” for fiscal and monetary policy:

Obviously, there is still considerable uncertainty about how fiscal policy will evolve over the next few years. At this juncture, it is premature to reach firm conclusions about what will likely occur. As we get greater clarity over the coming year, I will update my assessment of the economic outlook and, with that, my views about the appropriate stance of monetary policy.

Does that mean a more aggressive dot plot? Probably not, but Janet Yellen’s body language in the subsequent press conference might signal a more hawkish tilt, depending on how the FOMC interprets the new administration fiscal policy proposals.

What about The Donald? How will Trump react? Will he tweet and express his displeasure with the FOMC decision? Will he view a rate hike as a personal challenge to his plan to revive the economy and Make America Great Again?

Already, we have sensational headlines from the likes of Zero Hedge. The market will not react well if war erupts between Trump and Yellen.

I am still struggling with a contradiction about Trump’s view of monetary policy. I understand that Trump may like a more dovish interest policy, but much of the criticism of the Fed voiced by ZH and many Trump proxies are contrary to that preference. As an example, CNBC reported that Trump advisor and transition team member Judy Shelton criticized the Fed for undue meddling in the economy:

“What you want is productive growth and the kind of growth that is truly stimulated by tax reform, by regulatory reform, trade reform and important infrastructure projects to upgrade our ability to be more productive as a nation,” she said in an interview with CNBC’s “Closing Bell.”

Similarly, ZH touted the likes of Jim Grant, David Stockman, Jim Rogers, and Ron Paul for the two open positions of governors on the Federal Reserve Board:

If it is indeed Yellen’s plan to tank the Trump presidency on her way out by raising interest rates, the Donald should fight back. He should take to his best medium, the TV, and begin making the public aware of the sabotage going on. When Yellen abandons her throne, Trump should appoint someone who is concerned about the dollar’s long-term stability. A few choices off the top of my head: finance writer and all-around mensch Jim Grant, former Director of the Office of Management and Budget David Stockman, commodity guru Jim Rogers, or former congressional representative and arch-Fed-critic Ron Paul.

Either would do nicely in turning the Fed from a politically-driven economy-destroying machine into something far less dangerous. And each could do their part in making King Dollar great again.

These potential candidates to the Federal Reserve board, which includes Shelton, all share one characteristic. They all hated the Fed’s quantitative easing programs and easy monetary policy. They would prefer to hold Fed policy to some fixed rule, such as a Taylor Rule, for determining interest rates.

Here is my problem. The chart below shows a projected Taylor Rule rate that assumes a 2% constant real rate and 2% inflation target. The Fed Funds rate be roughly 2.8% today, which would kill any recovery and choke off economic growth. Is this what Trump really wants to Make America Great Again? 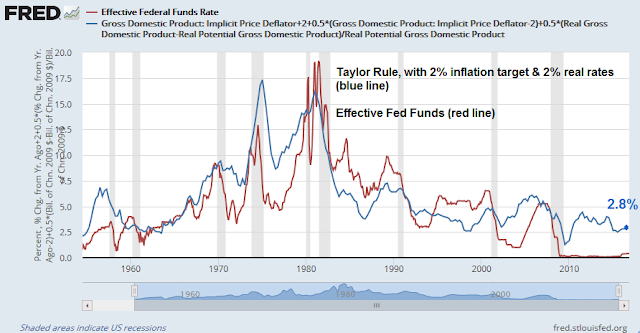 Notwithstanding any potential war of words between the Yellen Fed and the incoming Trump administration, Business Insider reported that Deutsche Bank modeled the possible paths of monetary policy in light of Candidate Trump’s fiscal policy proposals. 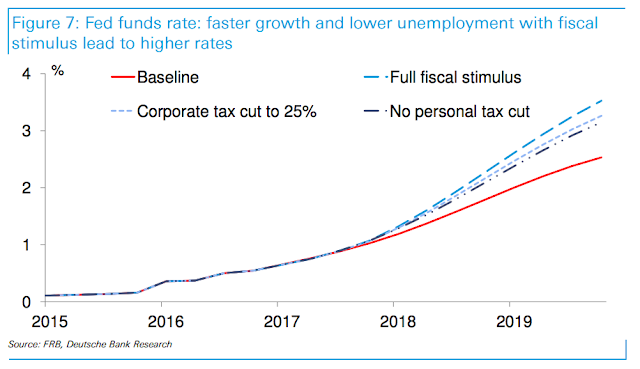 Depending on how fiscal policy evolves, we could see a heightened pace of rate hikes in the last half of 2017 compared to the current market expectations. Just remember the trader’s adage, three steps and a stumble, where three consecutive rate hikes tend to signal the start of a bear market.

That’s why it’s important to monitor Trump’s reaction to any rate hike.

Looking to the week ahead, there is no shortage of seasonality studies with bullish conclusions. Dana Lyons pointed out that December stock markets tend to tilt bullishly if the VIX Index makes a 3-month low in the first half of the month. 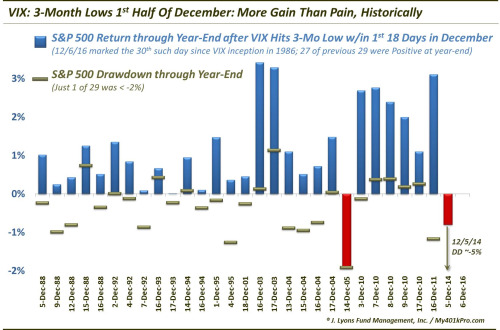 Equity options expire on Friday. Rob Hanna at Quantifiable Edges observed that December OpEx is one of the most bullish OpEx weeks of the year.

However, positive seasonal effects go out the window in light of the possible volatility from next week’s FOMC meeting. As we stand now, the stock market is dramatically overbought as major equity indices have surged to record highs. 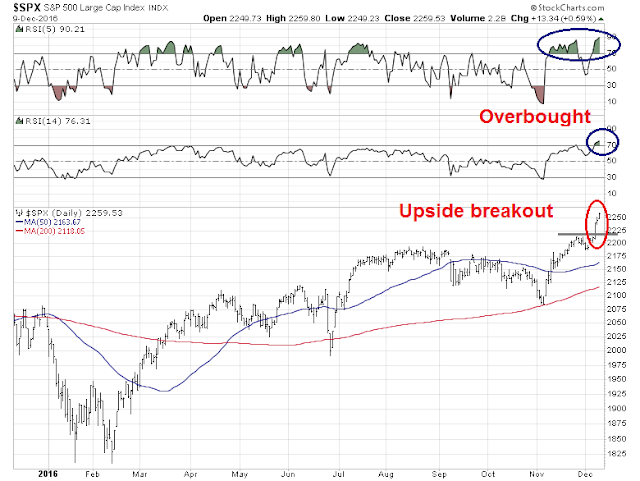 This chart from IndexIndicators of stocks above their 10 dma is a short-term (1-3 day time horizon) is flashing warnings of near-term downside risk. 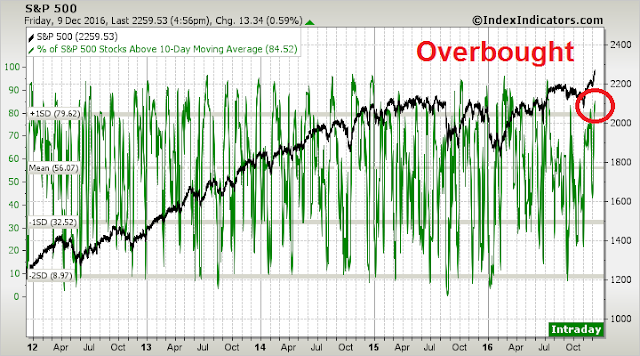 This net 20-day highs-lows is a longer term (1-2 week time horizon) indicator that is also signaling caution for the bulls. 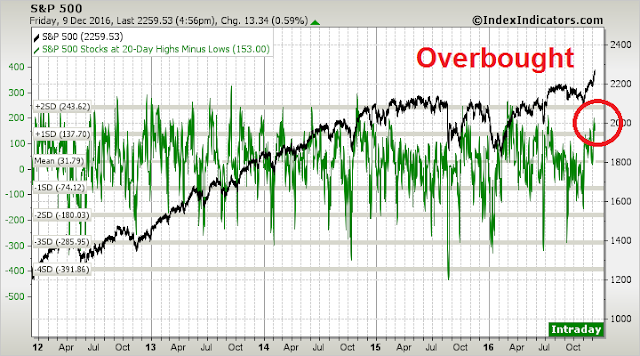 In addition, the CNN Money Fear and Greed Index is also overbought. Its own history shows that its signals can be several weeks early and this is not a precise contrarian indicator. 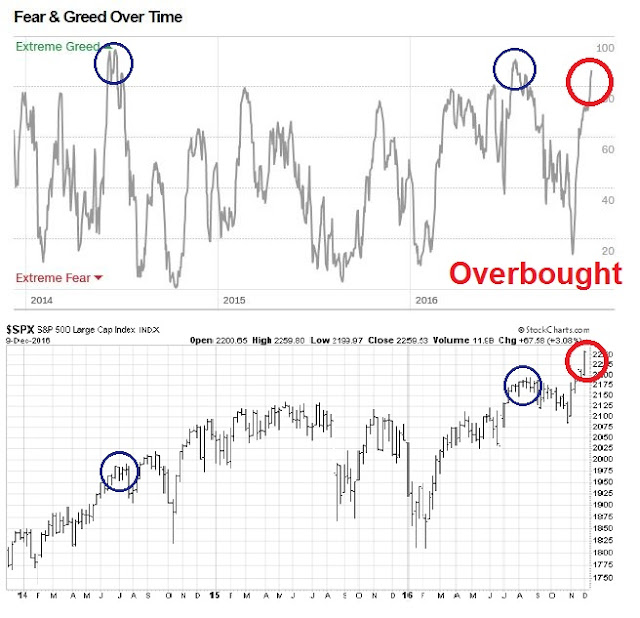 With those conditions in mind, I believe that any market consolidation or correction next week represents a great opportunity to buy stocks and to get positioned for a year-end rally. The trend in rising risk appetite is a signal of significant FOMO (Fear Of Missing Out) buying momentum. 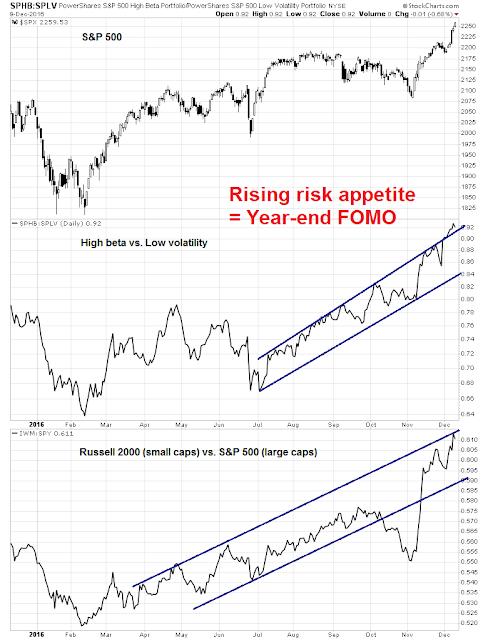 My inner investor remains bullish on equities. My inner trader took an initial long SPX position. He is enjoying the rally but he is waiting for a pullback to put more money to work on the long side.

8 thoughts on “Watch the reaction, not just the Fed”