A tale of two markets – Humble Student of the Markets

Mid-week market update: It was the best of times, it was the worst of times. Stock prices continue to surge ahead, while the bond market *ahem* is having its difficulties.

The Dow Jones Industrials Average made another record high, followed by the Transportation Average. The combination of the dual all-time highs constitutes a Dow Theory buy signal. 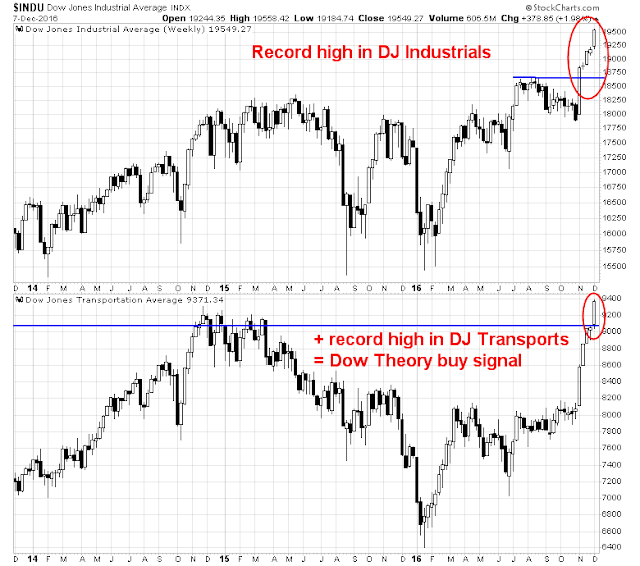 By contrast, investors are fleeing the bond market. Moreover, the yield curve is steepening, which means two things. First, long dated yields are rising higher than short yields, which means that investors at the long end of the maturity curve got hurt more. In addition, a steepening yield curve has historically been the bond market’s signal of better growth expectations. 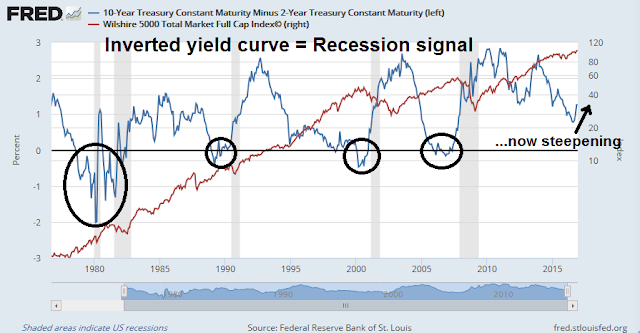 How are we to interpret these differing patterns in stocks and bonds? Have stocks gone too far? Are bonds ready for a comeback?

You can tell a lot about the character of a market when you watch how it responds to news. On the weekend, Italy overwhelming voted “no” to change its constitution. That outcome caused prime minister Matteo Renzi to resign, which raised the risk of more instability in the eurozone.

So what happened next? Stocks rallied. What’s more, the yield spread between Italian BTPs and German Bunds narrowed.

Stock prices continue to grind upwards. As the chart below shows, the SPX has flashed a series of overbought readings on RSI-5, only to pull back when RSI-14 hit 70, which is an overbought level. These is a classic example of what my former Merrill Lynch colleague Walter Murphy called a series of “good overbought” readings. 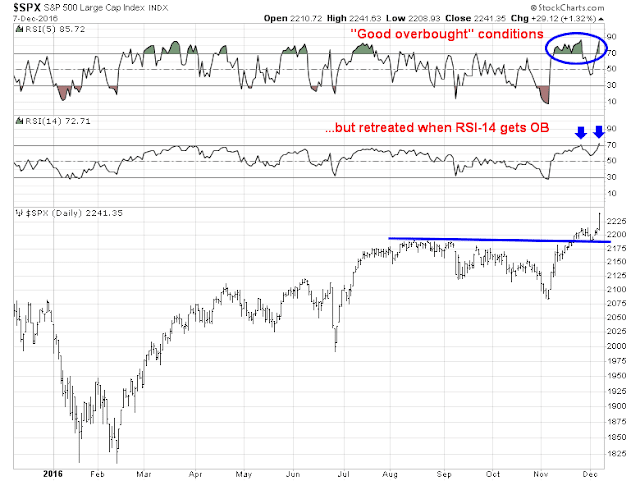 In the short-term, equities prices may pause and pull back a little here. Short-term breadth metrics are not at extreme levels. As this chart from IndexIndicators shows, % of stocks above their 5 dma is getting a little stretched. 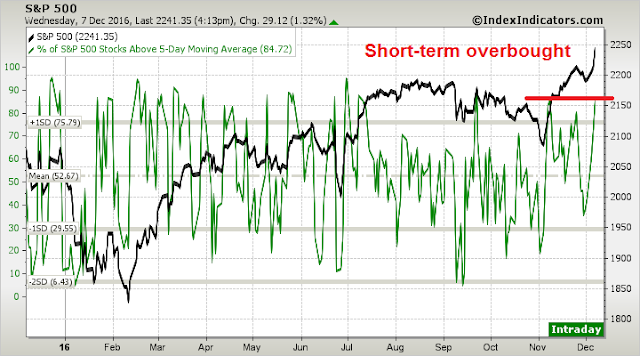 However, these timing models tend to have a very short-term (1-2 day) time horizon and any pullback is likely to be shallow given the powerful momentum that underlies this rally.

By contrast, consider this chart of TLT, which is the long Treasury ETF. Prices appear to be trying to find a bottom. It is experiencing a series of positive divergences on RSI-5 and RSI-14 even as it sees a number of “bad oversold” RSI readings, indicating negative price momentum. 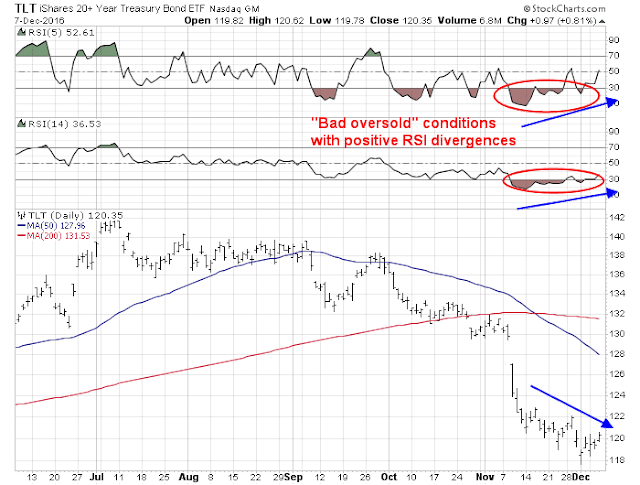 The latest Commitment of Traders data shows that large speculators, or hedge funds, have moved to a short position in the 10-year note (charts via Hedgopia): 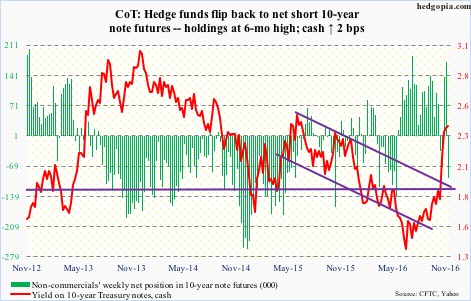 …and in the long Treasury bond. These readings are indicative of crowded short positions. 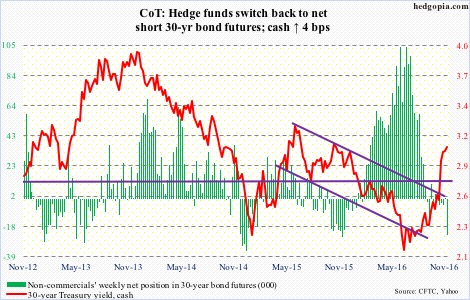 Is the bond market flashing a series of “bad oversold” conditions? Should you try to catch falling knives?

To be sure, a longer term perspective of the 10-year Treasury yield shows that the downtrend is still intact. 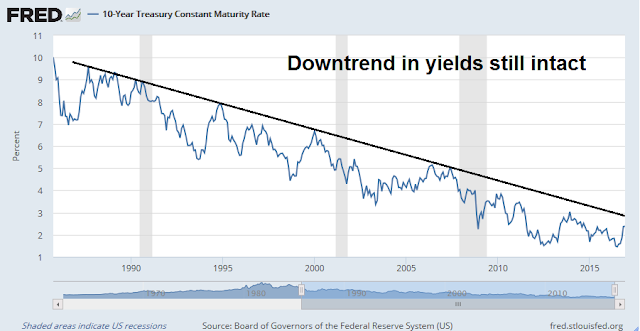 Have stock prices risen too far, too fast? Are bond prices poised to bounce? Here is my interpretation based on inter-market, or cross-asset, analysis. 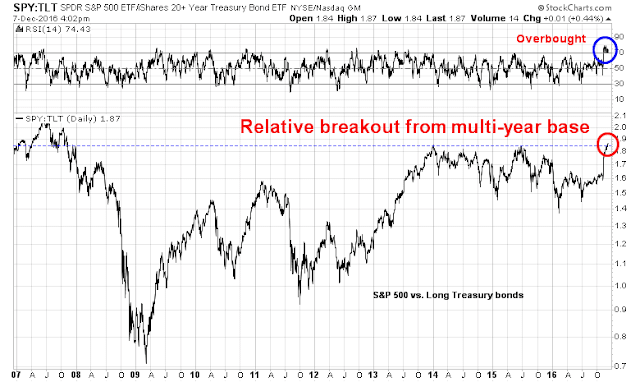 We can get more clues form other underperforming assets, such as gold and gold stocks. As the chart below shows, gold stocks (GDX) are showing a similar bottoming technical pattern as bond prices. As I indicated before, the % bullish metric (bottom panel, also see Why it’s too early to buy gold and gold stocks) tend to form double or multiple bottoms before a sustainable bottom is made. Gold and bond prices could bounce here, but any strength is likely to be short-lived. 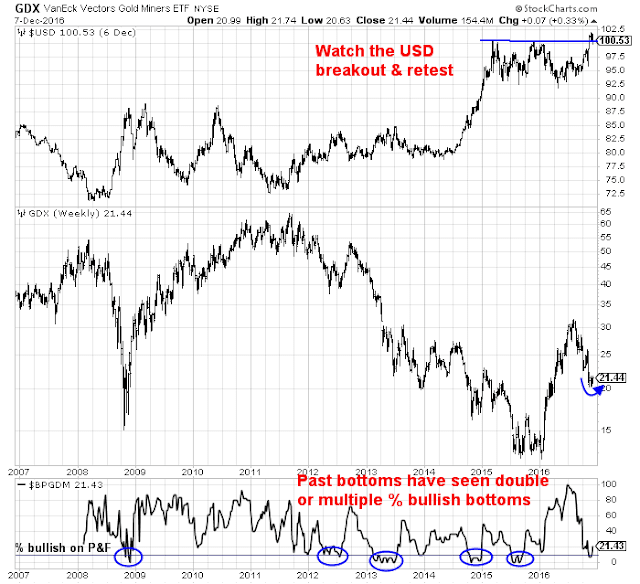 One clue to the timing of any turnaround in stock, bond, and gold prices is the US Dollar (top panel). The USD Index has pulled back to test support at its last breakout. The success of any bounce in gold and bonds, as well as a pullback in stock prices, can be found in the behavior of the greenback.

In conclusion, the stock market is experiencing strong price momentum from a FOMO (Fear Of Missing Out) risk-on stampede in the wake of the election. Expect stock prices to pause or pull back for 1-2 days, but continue advancing for the remainder of December as underperforming managers pile into the career risk trade in order to chase returns. Any pullbacks should be regarded as buying opportunities. Conversely, any turnarounds in gold or bond prices in the month of December will probably be fleeting. Better opportunities in those asset classes are likely to emerge in 2017.

13 thoughts on “A tale of two markets”