Do you have what it takes to succeed in finance? (Dani Rodrik trilemma edition) – Humble Student of the Markets

Dani Rodrik of the Harvard Kennedy School has outlined a trilemma of the global economy. 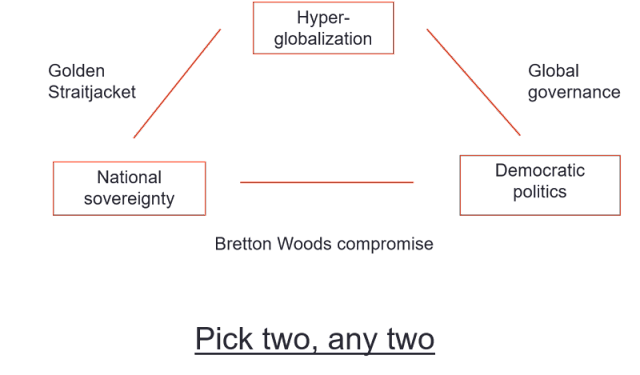 The Economist explained the trilemma this way:

Dani Rodrik of Harvard University is the author of the best-known such critique. In the late 1990s he pointed out that deeper economic integration required harmonisation of laws and regulations across countries. Differences in rules on employment contracts or product-safety requirements, for instance, act as barriers to trade. Indeed, trade agreements like the Trans-Pacific Partnership focus more on “non-tariff barriers” than they do on tariff reduction. But the consequences often run counter to popular preferences: the French might find themselves barred from supporting a French-language film industry, for example.

Deeper integration, Mr Rodrik reckoned, will therefore lead either to an erosion of democracy, as national leaders disregard the will of the public, or will cause the dissolution of the nation state, as authority moves to supranational bodies elected to create harmonised rules for everyone to follow. These trade-offs create a “trilemma”, in Mr Rodrik’s view: societies cannot be globally integrated, completely sovereign and democratic—they can opt for only two of the three. In the late 1990s Mr Rodrik speculated that the sovereignty of nation states would be the item societies chose to discard. Yet it now seems that economic integration may be more vulnerable.

In practice, it is difficult to integrate global trade without the harmonization of standards and business practices. While that sounds fine in theory, here is an example of what happens when the rubber meets the road.

Consider the case, and this was literally a court case in the Canadian province of British Columbia, of Ogden vs. Canadian Imperial Bank of Commerce, 2014 BCSC 285. The case involved the litigation of Guiyun (Han) Ogden against her former employer CIBC. Guiyun Ogden comes from an ethnic Chinese background and she acted as a licensed financial advisor. Her employer fired her for cause and the ensuring legal dispute revolved around whether the act of termination for cause was overly harsh.

Without regard for the merits of the case, the business practice that Ogden used raised a number of eyebrows. (Note that this summary was written by a Canadian judge):

[162] This incident occurred on September 9, 2010, when Ms. Ogden received two wire transfers from third parties in China and had the funds immediately transferred into the account of Ms. Xuelan Xu.

[163] Ms. Xu was a client of Ms. Ogden’s. She emigrated from China in 2009 and lived in Richmond. Ms. Xu had found a $5.7 million home in Vancouver that she wanted to buy. She was approved for a $3.45 million personal line of credit through Ms. Ogden to finance, in part, the purchase of this home. Ms. Xu testified that she needed to bring just over $500,000 into Canada from China for the deposit.

[164] As a result of Chinese regulations at the time, each individual was restricted to transferring no more than $50,000 USD abroad annually out of China. Working around these regulations was a challenge and a complicated process, but it was a practice CIBC supported. There is no issue about this. If, for example, a CIBC client wanted to send $150,000 from China to Canada, the money had to come from three accounts belonging to three different account holders in China and be transferred to three separate accounts belonging to three separate account holders in Canada. As long as all the appropriate accounts were set up, the money could be moved.

[166] On September 9, 2010, in the middle of the night, Ms. Ogden received a phone call from Ms. Xu. She was in a panic. She was short two accounts to bring in two wire transfers of $50,000 USD. Ms. Xu was calling from Vancouver, but she had two people at a bank in China at that very moment – with the 16 hour time difference it was business hours in China – ready to wire the funds from their respective accounts. The urgency was that the deal on Ms. Xu’s $5.7 million home would collapse if the funds weren’t transferred immediately as the deposit funds had to be in Canada the following day to secure the offer.

[167] Ms. Xu asked Ms. Ogden to provide her with two of Ms. Ogden’s own account numbers so that the funds could be transferred from China and then into Ms. Xu’s accounts the following day. It was the middle of the night. Ms. Ogden had no one to consult.

[169] In the unique context of the wire transfer limits out of China, she was trying to facilitate the client’s need to bring the necessary family funds to Canada so that she could close the deal on the home. Ms. Ogden concluded there was no problem with the transaction and gave Ms. Xu two of her own personal account numbers.

I can see a few problems here. First, there is the compliance issues of accepting wire transfers of US$50,000 from 10 different sources (how do you know it’s not drug money, or funding terrorism? Also see my previous post How China’s Great Ball of Money rolled into Canada), As well, Ogden`s practice of co-mingling client funds with her own got her in trouble with her employer.

This is where Rodrik`s trilemma comes in. Trade globalization requires the harmonization of practices. But whose practice do you adopt?

[170] The cultural aspect of how business is conducted in China is an important overlay to this case. It explains why Ms. Ogden was so successful at her job. And it explains – in part – why she held the view that how she facilitated the transfer of funds for her client from China was a reasonable course of action. Ms. Ogden testified that in China you form a relationship first, as friends and then you do business. Thus, business is conducted as friends helping friends.

[172] Ms. Xu echoed this sentiment and testified that in China it was “very common” for her bank account manager to make various payments on her mortgage or credit card using “the account manager’s own funds” if Ms. Xu was out of the country. Ms. Xu would simply pay the account manager back when she returned.

[173] The practice in China does not impact the fact that a Canadian bank policy governed Ms. Ogden’s conduct in this case, but it does help to understand why Ms. Xu did not think her request was unusual. This was not the case of a client saying “I know you probably shouldn’t do this but… ”. The conflict of interest was certainly not apparent to Ms. Xu.

Where do you draw the line in a client-adviser relationship? How do you define fiduciary duty in such an instance?

Guiyun Ogden operated according to Chinese business practices in Canada. Because of that, she was very successful at her job of cultivating Chinese clients. For that, she was fired by her employer for violating the bank’s standards against co-mingling client funds with her funds. (The fact that the bank turned a blind eye to numerous US$50,000 wire transfers into a single account is a different issue that needs to be addressed elsewhere.)

It depends on what you mean by “ethics”?

The bank’s view was Ogden violated bank policy by creating a conflict of interest when she co-mingled client funds with her own. What she did opens the door to embezzlement, which is a liability that no bank wants. Her employer therefore created policies and procedures to guard against that kind of behavior.

On the other hand, Ogden operated according to Chinese relationship business practices, where transactions like these were not unusual at all. After all, relationships are based on trust. As long as there is trust, there is profit potential from additional banking business.

How far would you go?

This becomes a Rorsbach test of how far you are willing to go in order to succeed in finance. How far would you go to bend the rules, especially if what you are doing is considered to be normal business practice in the country or culture that you are catering to.

Before you answer that question, Ben Carlson at A Wealth of Common Sense recently outline some important research from John Bowman of the CFA Institute, who conducted a survey of investment professionals:

If only 28% of investment advisers are there to serve their clients and 62% believe that their employer is acting in its own best interest, what does that say about the incentive system (Exhibit A: Wells Fargo)?

Now tell me how far you would go to succeed in finance (in the face of differing business practice standards)?

5 thoughts on “Do you have what it takes to succeed in finance? (Dani Rodrik trilemma edition)”