Is the earnings recession over?

Regular readers will know that I have been bullish on stocks for the last few months. My forecast has called for an equity rally into year-end and beyond. Last week, a couple of Street strategists have turned cautious on the stock market. I would therefore like to examine the bear cases that they present. 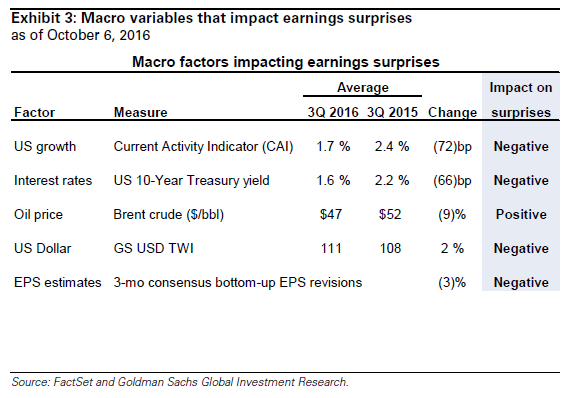 As I will show, at the core is the bull vs. bear debate is whether the earnings recession ended in Q3 2016.

How expensive are stocks?

First, I would like to address the issue of market valuation, which HSBC analyst Ben Laidler raised. How cheap or expensive is the stock market?

The indirect evidence does not suggest that the market is expensive. The latest update of insider activity from Barron’s shows that this group of “smart investors” have been steadily buying in the last few weeks. While insider trading data is noisy and readings can be volatile from week to week, it’s difficult to reconcile the idea of smart money buying an expensive market.

John Butters at Factset reported this week that the SPX trailing P/E ratio is 19.4. At first glance, that appears to be well above the historical average and that P/E ratio has only been exceeded by the market P/E during the Tech Bubble of the late 1990s. However, inverting the P/E ratio to an earnings yield of 5.2%. With the 10-year Treasury yield at 1.8%, there is a certain element of TINA (There Is No Alternative to stocks) that is supportive of the equity bull case. 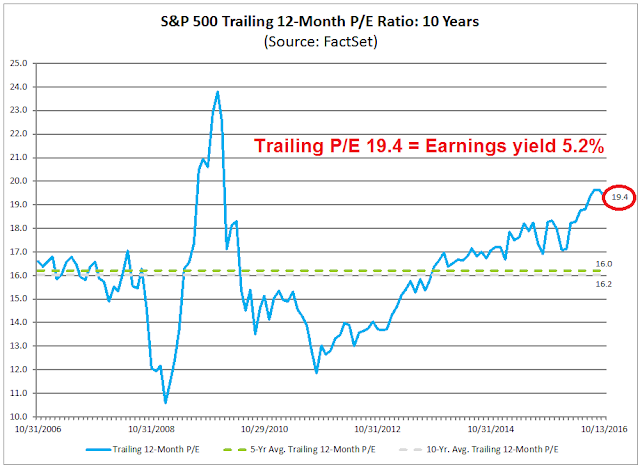 What if interest rates were to rise? Wouldn’t that make stocks less attractive? Analysis from JPM Asset Management shows that when 10-year rates are below 5%, stock price movements are positively correlated with changes in interest rates. 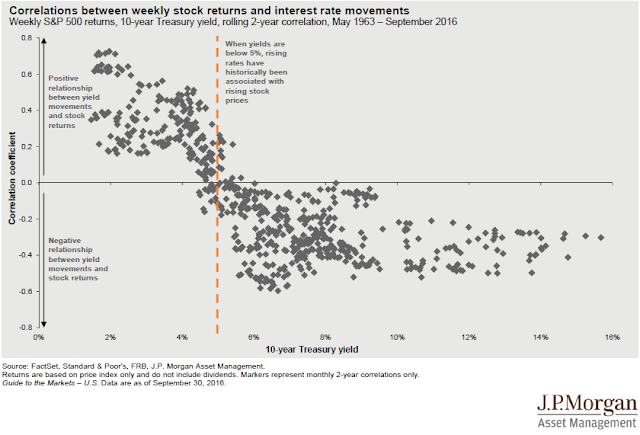 Other historical studies have shown that stock prices tend to rise even when the Fed first starts a rate hike cycle. That’s because the Fed raises interest rates to cool down an economy that’s growing to quickly. The market initially focuses on the positive effects of better growth, rather than the negative effects of higher interest rates.

In the current environment where the Fed is about to raise rates, the equity valuation vulnerability issue becomes a question of whether better earnings growth can overcome the negative effects of a likely December rate hike. Is the earnings recession over? Can stocks continue to rise in anticipation of better earnings?

The earnings recession in context

To put the recent earnings recession into context, the latest Factset report shows that trailing 12-month EPS peaked in late 2014, along with the oil price, and they have been falling ever since (annotations in red are mine). 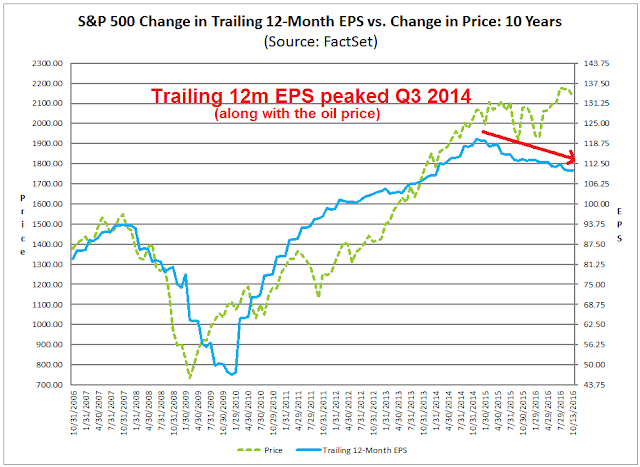 The bear case rests mainly on deceleration macro data. The Atlanta Fed’s nowcast of Q3 GDP growth has fallen to 1.9%. The NY Fed`s nowcast stands at 2.3%. Both figures are considerably lower than the levels seen in late August when the nowcasts were in the 3.0-3.5% range. 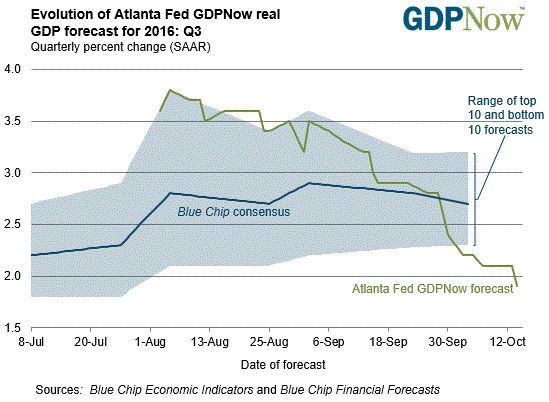 A great deal depends on whether the recent lows in interest rates translate into an increase in the new housing market. This coming week we will get housing permits and starts, which assume even more importance that usual, especially as mortgage applications – positive for now – nevertheless look like they are getting ready to roll over.

In other words, don’t panic, but watch for more developments.

While the bear case for equities stems from top-down macro analysis, much of the bull case can be attributable to bottom-up derived fundamentals. The latest Q3 estimate of YoY EPS growth is -1.8%, but Q3 may be the bottom for earnings growth (annotations in red are mine). 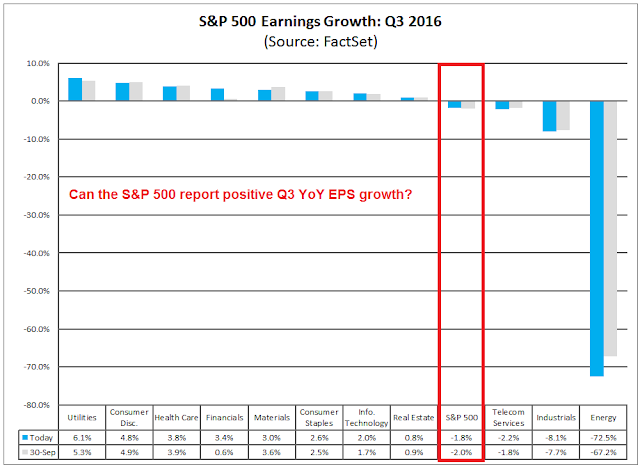 John Butters pointed out that a meagre -1.8% YoY growth estimate is not such a big hurdle. If results came in line with the beat rate results seen in a typical earnings season, it would be enough for EPS to return to positive YoY growth:

Over the past four years on average, actual earnings reported by S+P 500 companies have exceeded estimated earnings by 4.3%. During this same time frame, 68% of companies in the S+P 500 have reported actual EPS above the mean EPS estimates on average. As a result, from the end of the quarter through the end of the earnings season, the earnings growth rate has typically increased by 2.9 percentage points on average (over the past four years) due to the number and magnitude of upside earnings surprises.

Much of the earnings recession can be attributed to a higher USD and lower oil prices. The chart below shows the JPM Asset Management estimate of the effects of USD strength on SPX revenues over the last few years. 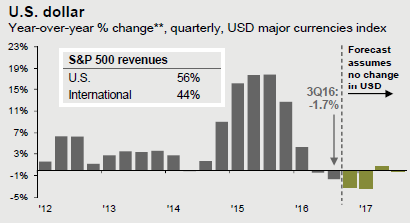 The USD has been roughly neutral on a YoY basis in Q3, so the negative effects of USD strength are gone. 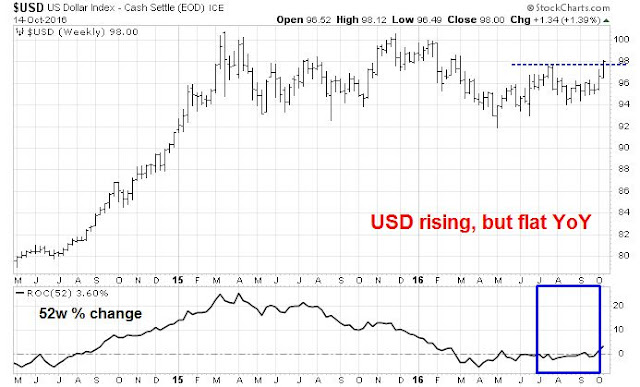 Here is the JPM Asset Management’s estimates of the effects of lower energy prices on SPX earnings. 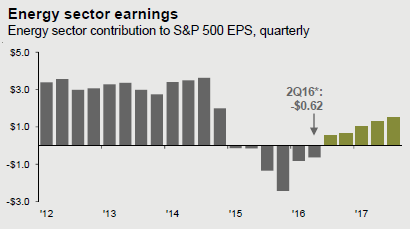 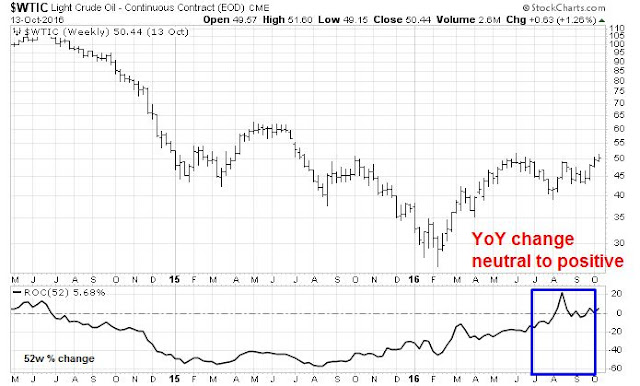 Here is a chart of natural gas prices. The YoY effect is even more positive than crude oil. 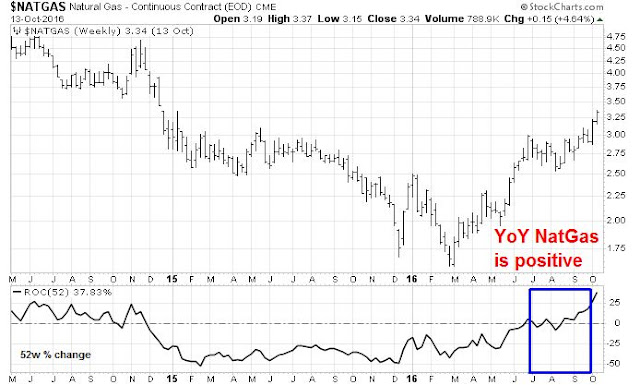 As those macro headwind abate, is it any surprise that forward 12-month EPS are being revised upwards? In addition, Thomson-Reuters reported that Q3 earnings guidance, or preannouncements, has come in more positively than the historical experience. 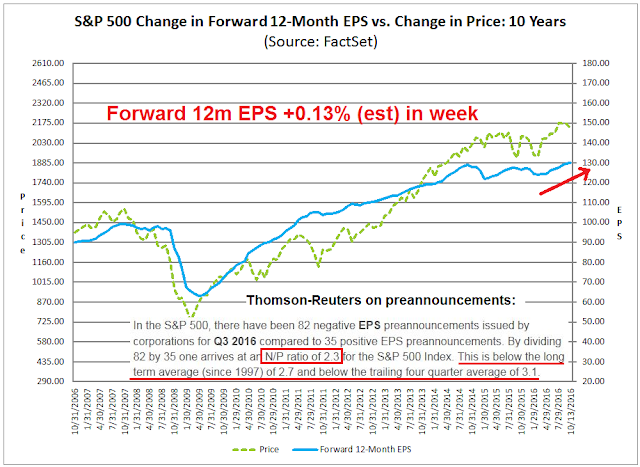 The bond market seems to agree with the assessment of higher growth. Despite the rise in 2-year yields in anticipation of a December rate hike, the 2/10 yield curve steepened, which is an indication that the bond market expects rising growth. 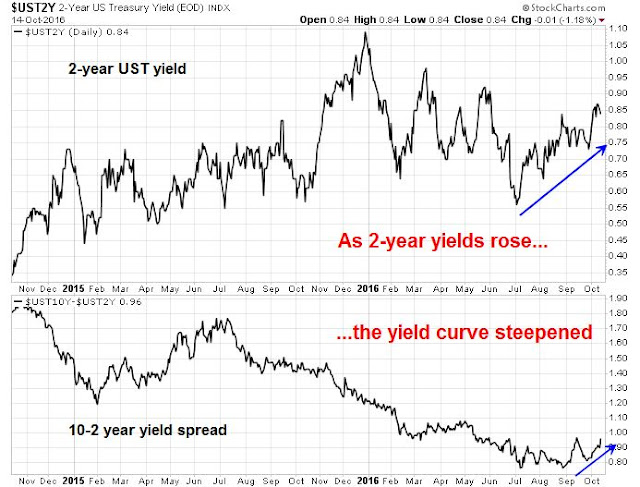 At the end of the day, the key to stock prices will be the report card from Q3 earnings season. Will it surprise us on the upside or downside? While the signs of macro weakness are worrisome, I find it difficult to believe that Q3 earnings season will disappoint without any indications from the troops on the ground. Company guidance has been more upbeat than usual, and Street analysts have not found signs of aggregate deterioration.

One possible explanation for the divergence between top-down and bottom-up data analysis is the macro bears are reacting to lagging signals of economic weakness. The Citigroup US Economic Surprise Index (ESI) measures whether high frequency economic releases are beating or missing expectations. As the ESI chart below shows (gold line), the index had been falling but it has recently stabilized, indicating the start of a possible turnaround. 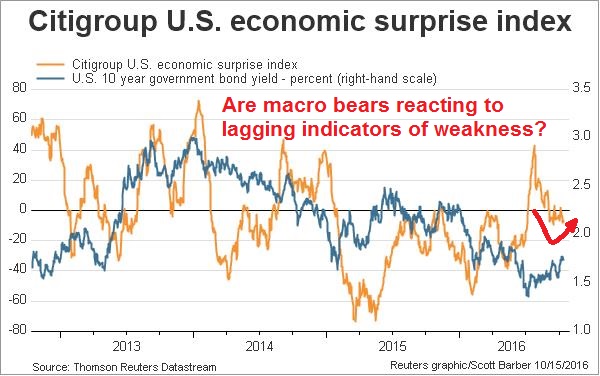 There is a possibility that the bears have become overly negative. They have focused too much on the downside risks to the economy. Jim Paulsen at Wells Fargo Asset Management recently asked the question, “What could go right?”

Here are the upside risks that he named (shown in bold, with my comments after each bolded point): 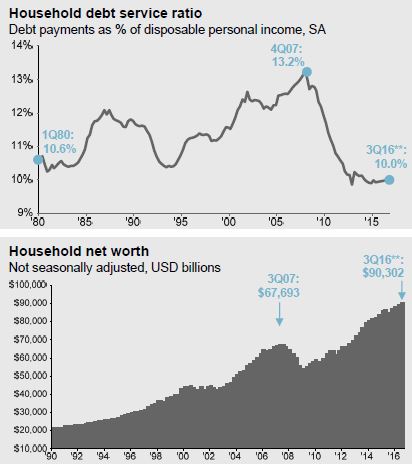 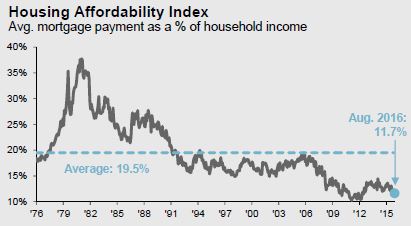 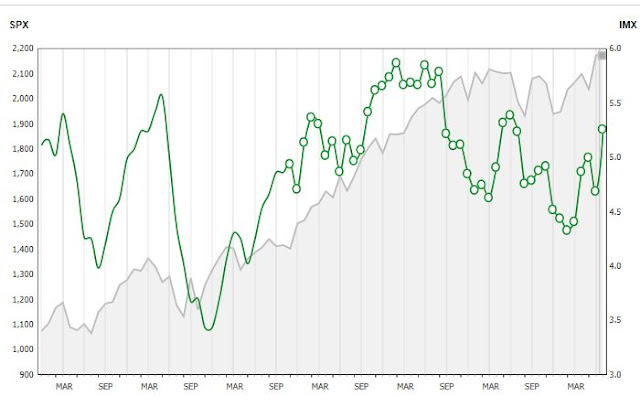 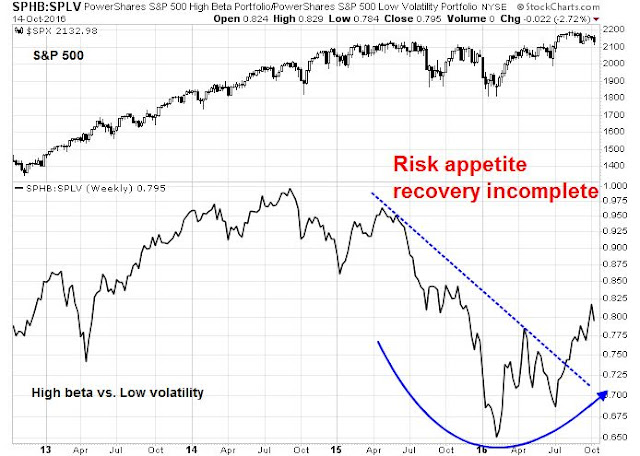 Paulsen cautioned that it may be too early to get

We are impressed by how much potential still exist relative to how little most expect from the balance of this recovery. Since the recovery has proved disappointing for so many years, the expectations bar is extraordinarily low. The disconnect between recovery potential and expectations could be powerfully profitable. Earnings growth has been negative for two years and even a modest improvement in earnings may be perceived as a great relief. Global economic growth has been so bad for so long it really doesn’t need to quicken to impress. If it simply synchronized, it would feel different and much improved relative to any other time in this recovery. A bounce in productivity, an upturn in capital spending or improved housing activity would definitely surprise and inspire.

Then there are the real shockers. What if money velocity started rising and boosted business sales like never before in this recovery? What if the household and/or the business sector decided to take their recently retrofitted and markedly improved balance sheets out for a leveraged test drive? How about if the public finally tires of the bond market and allocates some funds back toward the stock market? Finally, what if confidence ultimately goes beyond just calming after the 2008 crisis and actually jumps to levels that embolden some true animal spirit behaviors?

To be clear, the best of this bull market is already behind us. Total returns during the balance of this recovery are not likely to be as good as we have already enjoyed. However, it is looking more and more like the current recovery will prove to be the longest ever in U.S. history and experiencing some perfect days along the way seems probable.

Don’t get bearish too soon. While the probability of any single bullish factor occurring is small, there are lots of lurking positive surprises out that that could rip your face off if you are short the market.

The week ahead: OpEx week

Looking to the week ahead, we are approaching a seasonally positive option expiry week in October. I wrote about Rob Hanna’s historical analysis of OpEx by month (see Six reasons why I am still bullish). Jeff Hirsch at Trader’s Almanac also studied October OpEx and found the first day has a bullish bias, and so does OpEx week and the week after OpEx. 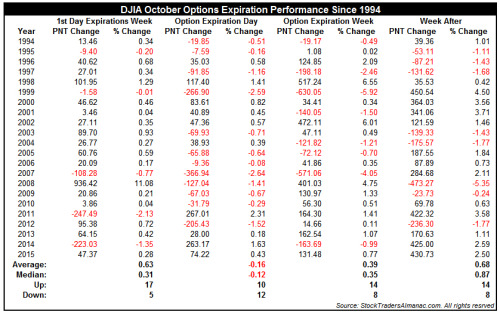 Callum Thomas pointed out that the market is starting its seasonally strong period of the year. 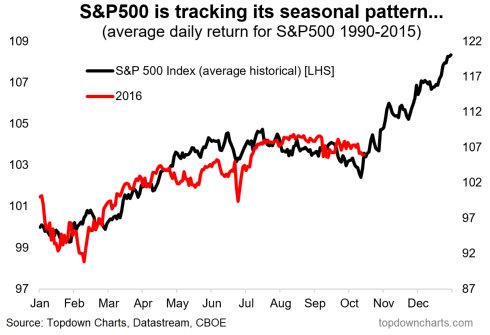 The market successfully tested support at 2120 last week. It ended Friday oversold and exhibiting bullish divergences on RSI-5 and RSI-14. 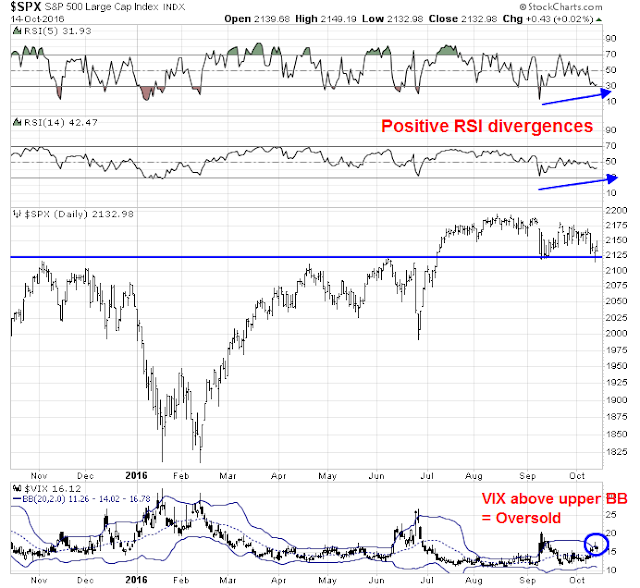 Breadth readings from IndexIndicators show that the market is oversold on a short-term (1-2 day) basis: 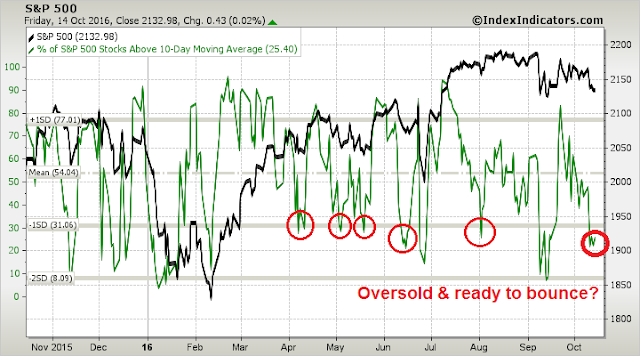 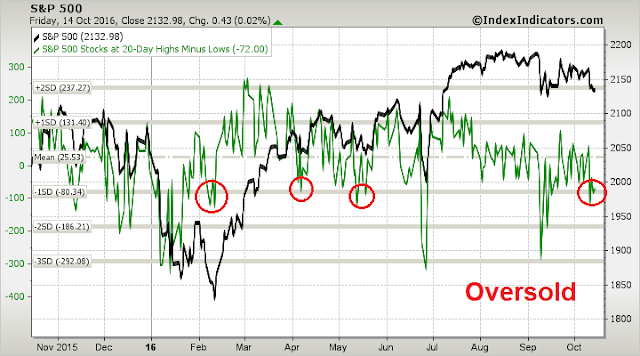 While oversold markets can get more oversold, the balance of probabilities favor a rally from current levels. Downside risk is likely to be limited from here. My inner investor is still positioned bullishly. My inner trader has been gradually adding to his long positions in anticipation of equity strength into year-end.