Mid-week market update: I wrote on the weekend to buy Yom Kippur, which ends today (see Buy Yom Kippur! SPX 2500 by Passover?). My inner trader sent out an email to subscribers yesterday indicating that he had added to his long position by buying a high-beta small cap position. 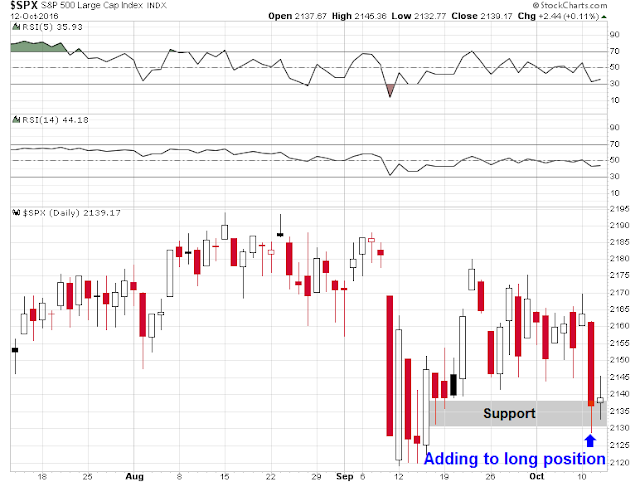 I would like to outline the reasons why I remain intermediate term bullish on equities:

From a technical viewpoint, market breadth is supportive of an advance to new highs. Ed Clissold at Ned Davis Research observed that breadth has been hanging in there despite the consolidation presented by the seasonally weak period. Almost 70% of the sub-industries that NDR monitors are still in uptrends. 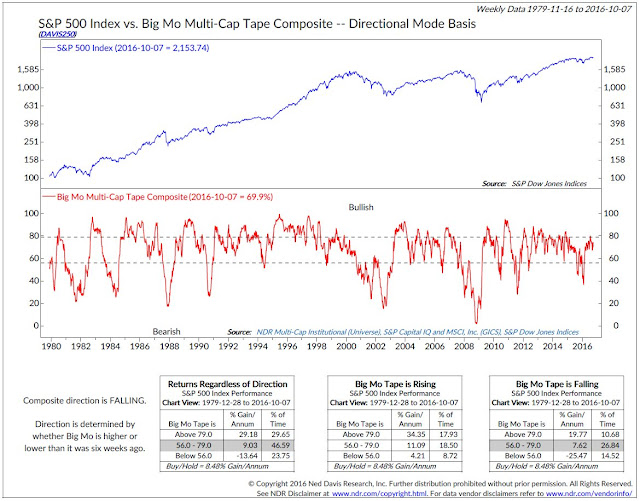 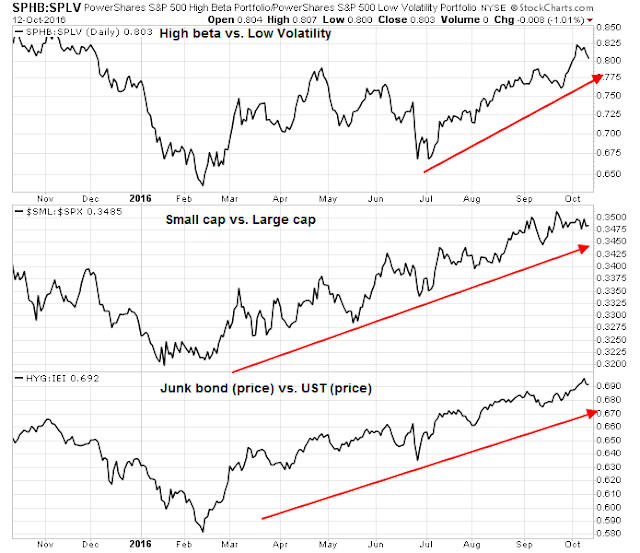 While most investor sentiment metrics are in neutral territory, a number of indicators are pointing to heightened levels of anxiety. Bloomberg pointed out that the cost of hedging against an equity market decline, defined as the cost of a put option vs. a call option, has hit an all-time high. 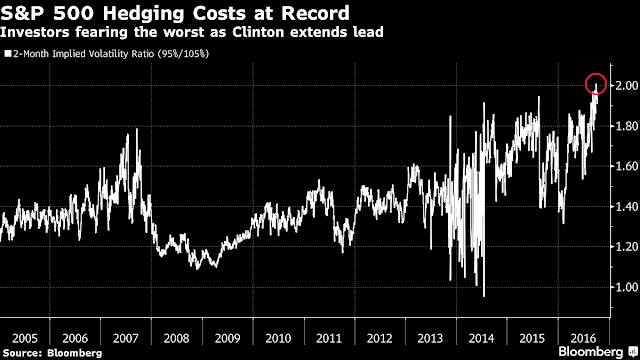 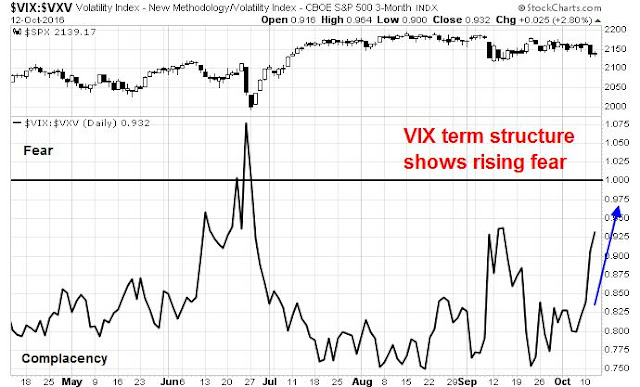 I interpret these sentiment readings as contrarian bullish. Major market declines normally don’t begin with sentiment at these levels.

The minutes of the September FOMC meeting were released today. It seems that the major disagreement was over the degree of slack in the labor market (emphasis added):

In their discussion of the outlook, participants considered the likelihood of, and the potential benefits and costs associated with, a more pronounced undershooting of the longer-run normal rate of unemployment than envisioned in their modal forecasts. A number of participants noted that they expected the unemployment rate to run somewhat below its longer-run normal rate and saw a firming of monetary policy over the next few years as likely to be appropriate. A few participants referred to historical episodes when the unemployment rate appeared to have fallen well below its estimated longer-run normal level. They observed that monetary tightening in those episodes typically had been followed by recession and a large increase in the unemployment rate. Several participants viewed this historical experience as relevant for the Committee’s current decision making and saw it as providing evidence that waiting too long to resume the process of policy firming could pose risks to the economic expansion, or noted that a significant increase in unemployment would have disproportionate effects on low-skilled workers and minority groups. Some others judged this historical experience to be of limited applicability in the present environment because the economy was growing only modestly above trend, inflation was below the Committee’s 2 percent objective, and inflation expectations were low–circumstances that differed markedly from those earlier episodes. Moreover, the increase in labor force participation over the past year suggested that there could be greater scope for economic growth without putting undue pressure on labor markets; it was also noted that the longer-run normal rate of unemployment could be lower than previously thought, with a similar implication. Participants agreed that it would be useful to continue to analyze and discuss the dynamics of the adjustment of the economy and labor markets in circumstances when unemployment falls well below its estimated longer-run normal rate.

Developments since that meeting are supportive of the doves’ case of delaying a rate hike. In particular, the September Jobs Report showed that the participation rate edged up, which is indicative of greater slack in the labor market. 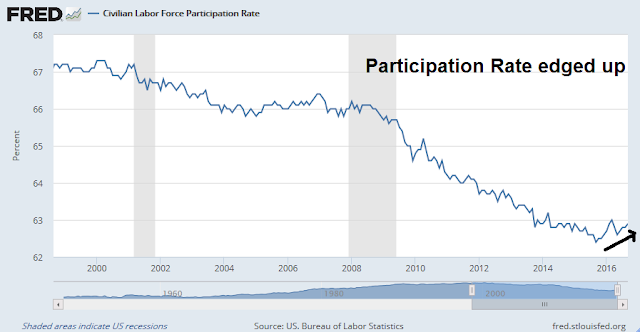 A November rate hike is definitely off the table. A December hike is likely, but not a done deal. It will be dependent on any market instability in the wake of the election. The Yellen Put still lives.

At the same time, growth expectations are still healthy. I have highlighted before the steady growth in forward 12-month EPS estimates, which remains a positive for stock prices. 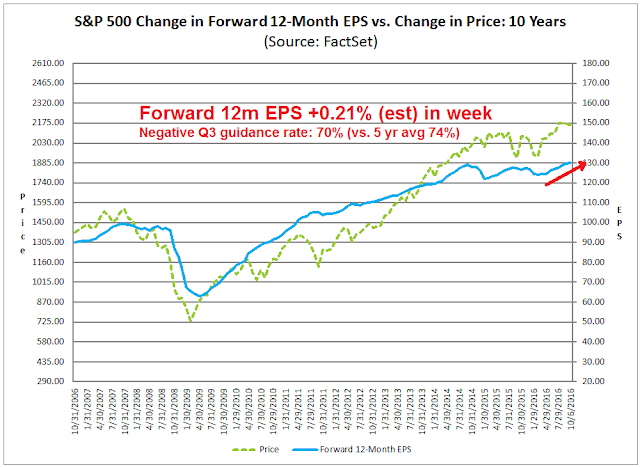 The bond market agrees. Despite the expectations of rising rates as measured by 2-year Treasury yields (top panel), the yield curve has been steepening, which is indicative of high growth expectations. 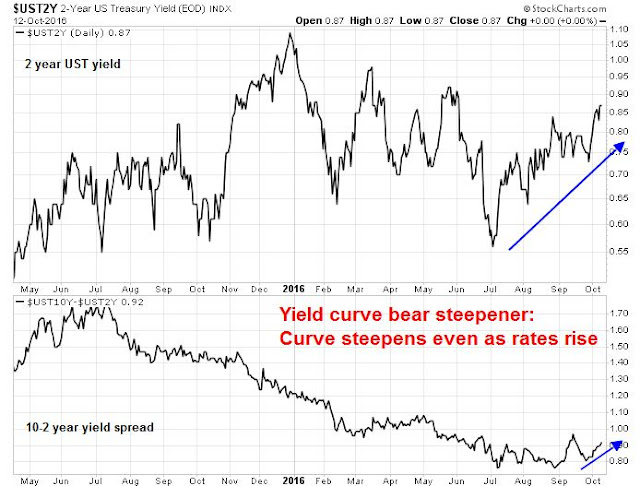 From a trader’s perspective, we are entering a period of positive seasonality. Notwithstanding some of the charts I showed in my weekend post (see Buy Yom Kippur! SPX 2500 by Passover?), options are expiring next week. Rob Hanna at Quantifiable Edges found that October OpEx has historically been seasonally positive for the bulls.

I have no idea exactly when the market is going to turn up, but these intermediate factors are all lining up bullishly. It`s time to buy Yom Kippur.

4 thoughts on “Six reasons why I am still bullish”